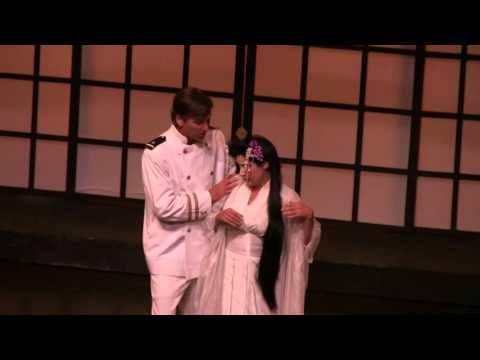 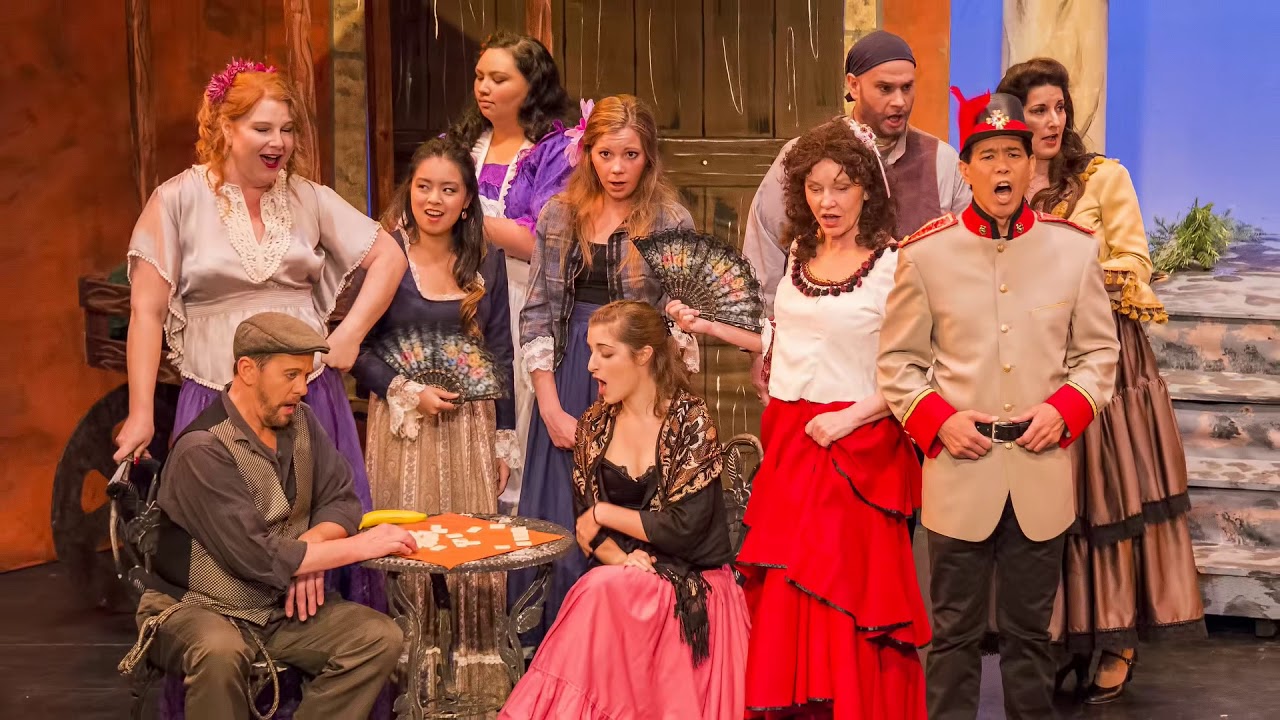 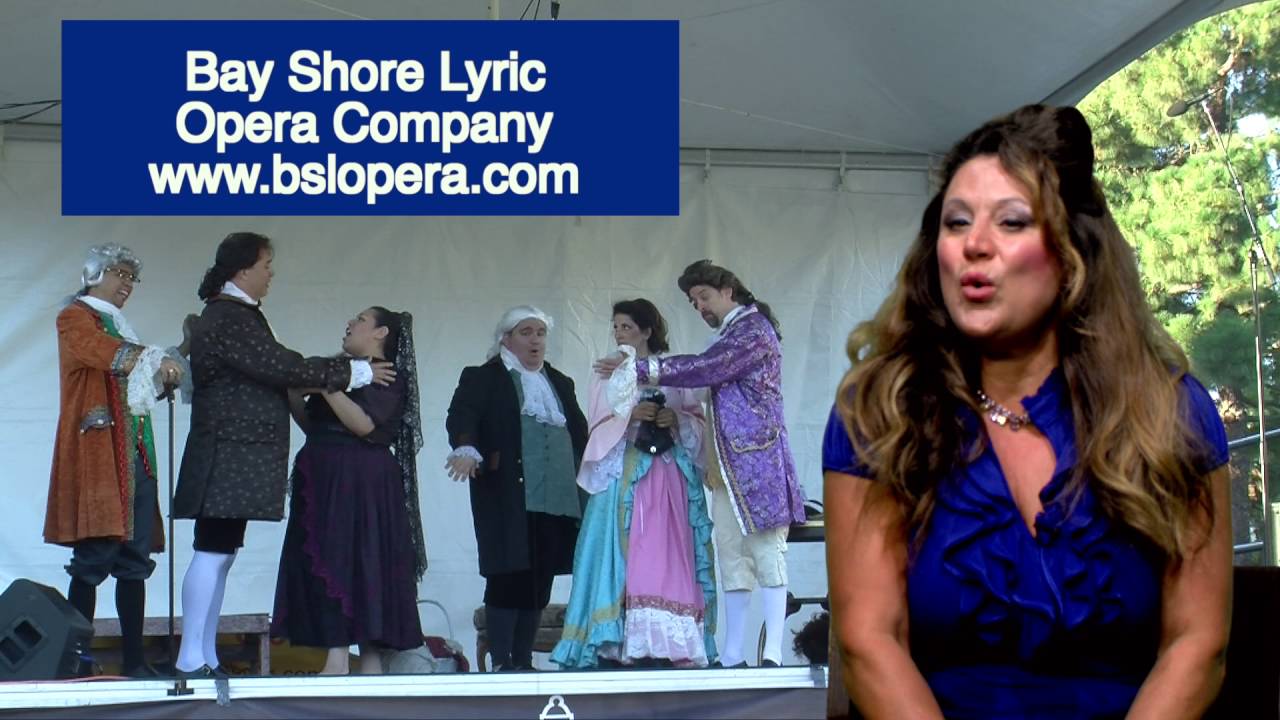 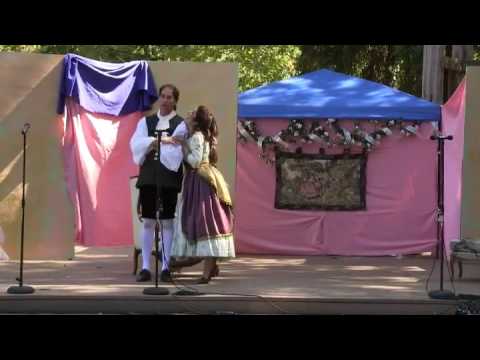 MARRIAGE OF FIGARO opera in the Parks 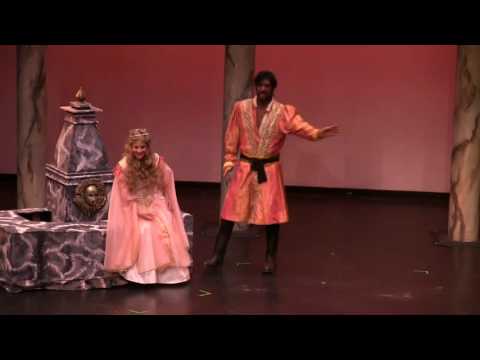 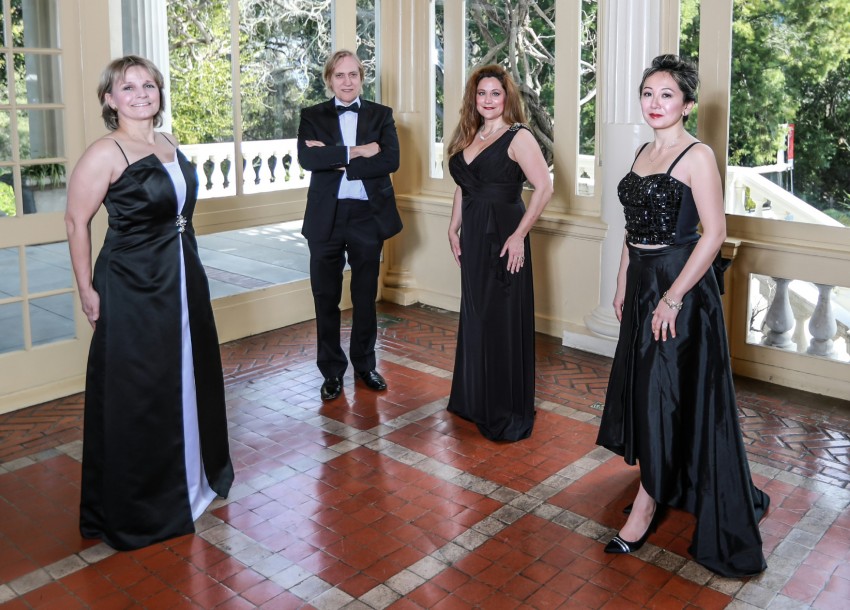 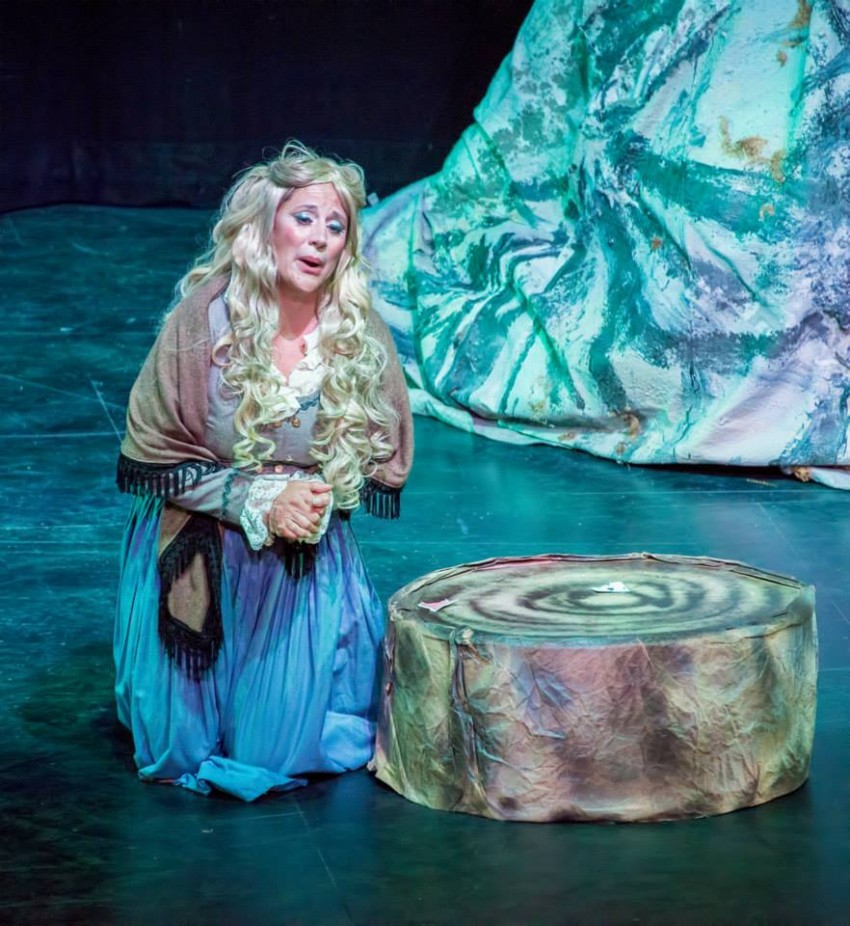 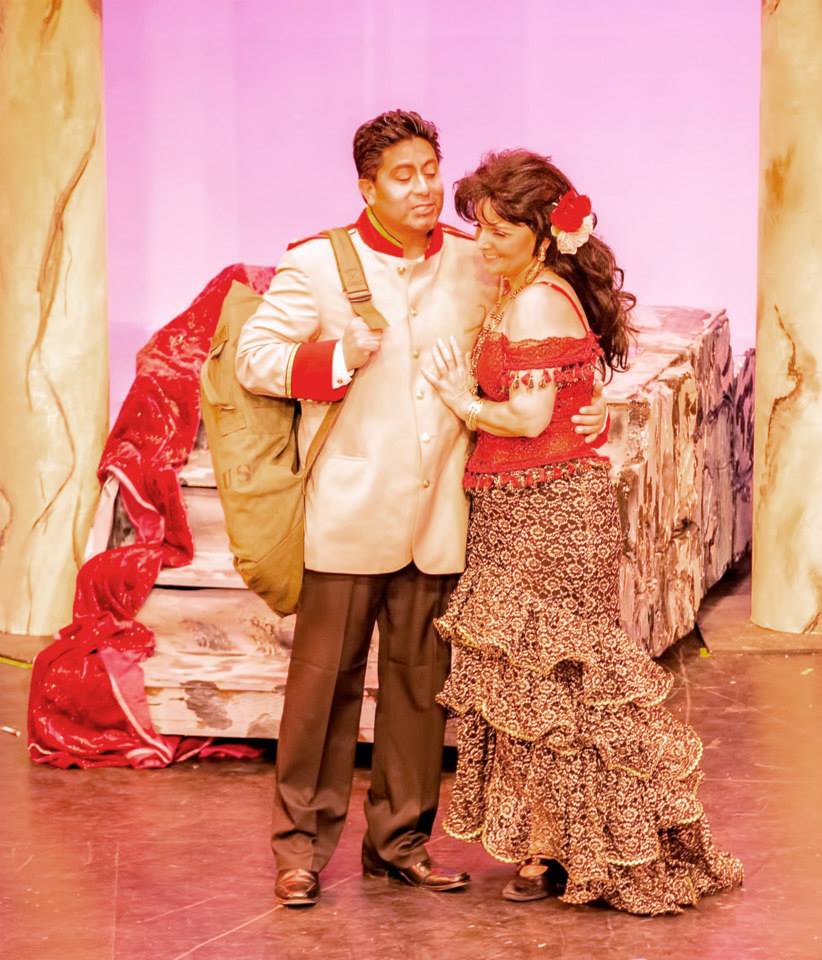 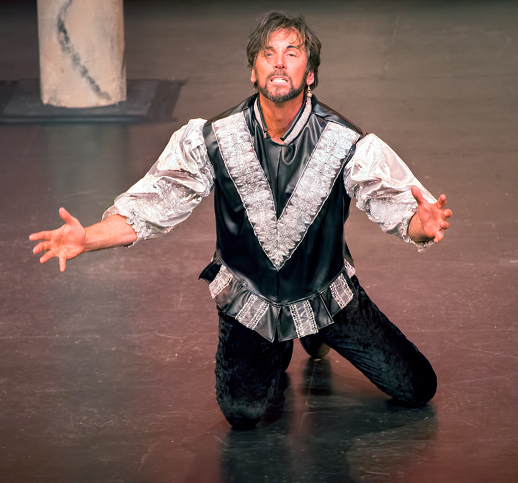 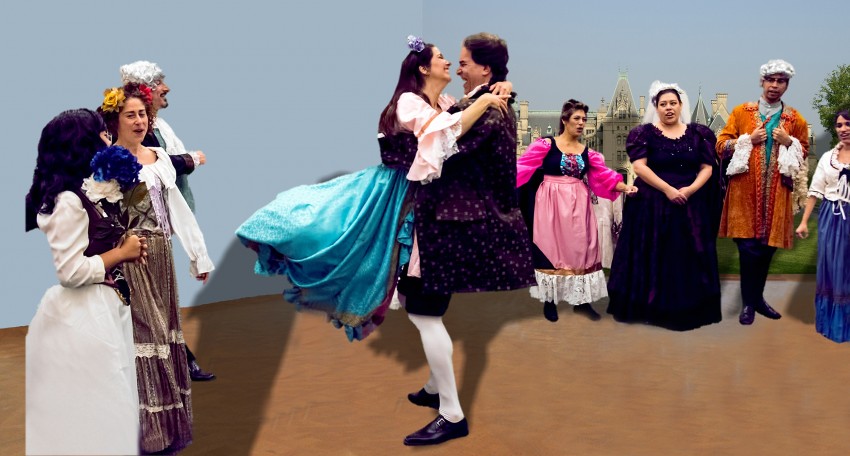 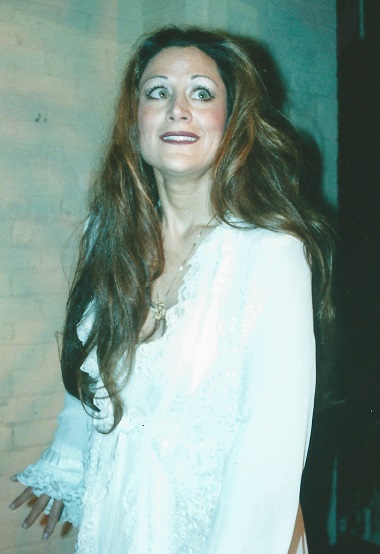 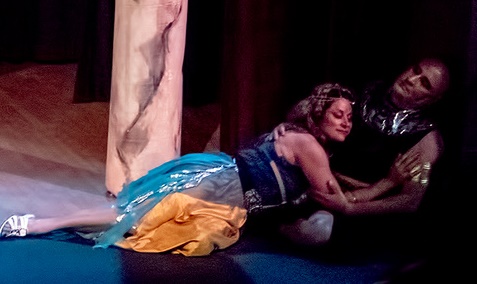 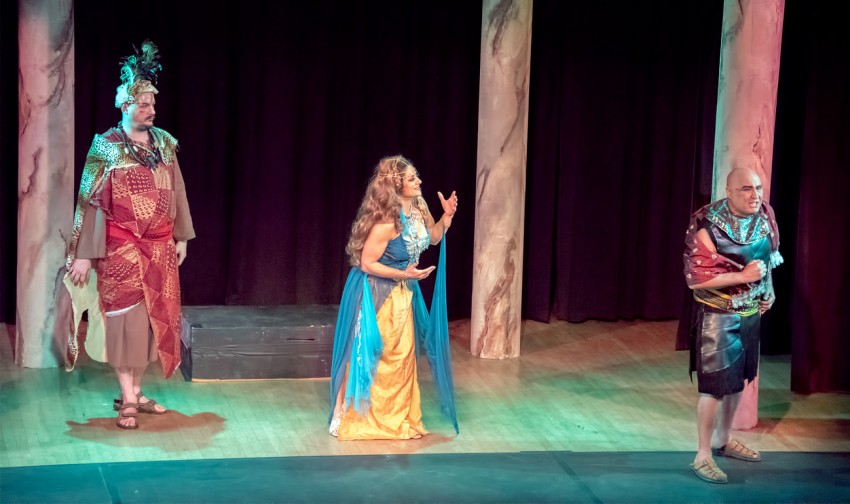 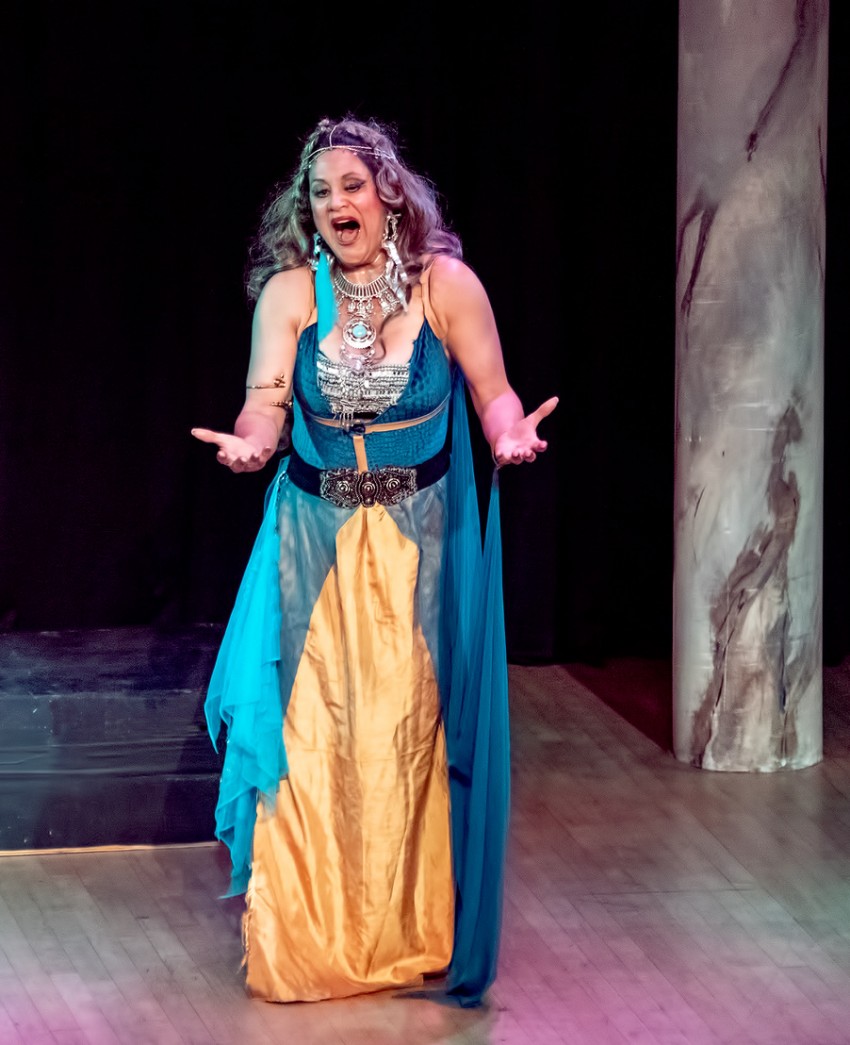 Professionally trained opera singers entertainment- unique and exhilarating music at your next Corporate Event, Private Party. Unforgettable experience! Opera, Broadway- we take requests too! Bay Shore Lyric Opera (BSLO) is a non profit 501c3 organization - ALL payments are fully tax deductible. No piano but background accompaniment 1 Opera singer $350 for 60 min. 2 opera singers cost $500 for 60 min. 3 Opera Singers costs $650 for 60 min.
BSLO provides PA system for gig's as needed. Will require electrical outlet access. All Payments can be made to BSLO and are a tax deductible donation. Thanks for supporting the arts.

Be the first to review Bay Shore Lyric Opera

Bay Shore Lyric Opera Company, a non-profit organization; will provide you with professional opera singers to perform for your guests. Popular opera arias, Italian Folk song, Broadway, at your specific requested repertoire. One opera singer with no piano and background accompaniment costs $450 for 60-120 minutes of music. Each additional performer/opera singer is an additional $150 or more depending on the time requested. We can provide a PA system for outdoor gig's which includes Speaker, Microphone, keyboard (if needed). Payments Bay Shore Lyric Opera are a tax deductible donation as we are a non profit 501-c3 organization. Thanks for your support

“Jennifer Der Torossian as Lucia, gave the title role an intense stage presence and dramatic persona.”…her Act III mad scene easily annoints her La coloratura assoluta di Capitola.” “She has develop power to fill the big houses” “Between glittering melismas, she fired off high notes which could easily have been heard a block away”
Metro Santa Cruz, April 11-18, 2001

“But if there is one performer who brings the house down, if not the show, down to its knees…it would have to be Jennifer Der Torossian…as Micaëla.”
Good Times, October 2000

“Der Torossian’s ability…as an actress constructed a remarkably compelling figure and as a singer softened the hearts of even those who thought they had become inured to such romantic stereotypes.”
“Der Torossian’s hope-against-hope Butterfly is impossible to resist”
Metro Santa Cruz, April 12-19, 2000

“Hard to believe, but Der Torossian’s Violetta manages to outdo even her Mimi from last fall’s La Boheme…her cadenza’ from the Act 1 show piece, “sempre libera,” were simply ecstatic, buzzing with energy like firecrackers ready to go off…”
Aptos Times, April 1999

“As for the prima donna, Jennifer Der Torossian’s singing continues to be a garden of delights and the main reason for those hankies.
Aptos Times, October 1998

“This light-hearted aria allowed Jennifer to engage nimble leaps and runs, therefore showing off the coloratura of her voice. She was beguiling. (“Sempre libera” aria)
Jamaica Gleaner, September 20, 1998

“…her acting has never been better. There are moments when she manages to deliver the entirety of Gilda’s adolecent confusion in a single facial expression”
Aptos Times, March 15, 1998

“The rhythmic drive from the argument, leading to the soaring descant from Der Torossian, makes for priceless opera.”
Aptos Times, March 15, 1998

“Jenny’s voice is so appealing, because she transforms all that breath into tone, without any leakage, so the tone is full. That’s why for such a small girl, she has such a tremendous voice. She sings coloratura, she sings spinto, she sings anything. She is very intelligent and she is destined to be the next primadonna.”
Palo Alto Weekly, March 13, 1998

“the piece which brought the house down was indeed her encore performance of Una voce poco fa”
The Gleaner; Kingston, Jamaica; 1997

“Jennifer Der Torossian displayed an artistic sensibility, which was easily recognizable once she uttered the first note. Coupled with her scholarship, virtuosity and genuine desire to please her audience, she earned sporadic and tumultuous applause.”
The Gleaner; Kingston, Jamaica; 1997

“Chief among these, however, has to be Der Torossian, whose lyric soprano flies from her mouth as if lifted by humming birds.”
Santa Cruz Sentinel, July, 1997 Review of Barber of Seville

“Der Torossian does things with a line of music that you may not hear anywhere else. Listen to the astounding bell-like staccatos outlining her cadenzas in the famed “Una voce poco fa” and you’ll understand.”
Santa Cruz Sentinel, July, 1997 Review of Barber of Seville

“An unexpected bonus are her animated features, used to great comic effect in her eyerolling reactions to Bartolo’s lectures.”
Santa Cruz Sentinel, July, 1997 Review of Barber of Seville

“The Capitola’s acoustics seem fine, but Der Torossian’s is the only voice that really gets all the way to the back wall”
“Der Torossian posses a sublime instrument”
Santa Cruz Sentinel, 1997, Review of La Boheme

“In her junior recital this May, 24-year-old Der Torossian demonstrated a dramatic control and knack for characterization for beyond her years”
Saratoga Newspaper, 1994, cover story
Jennifer
Der Torossian-Studley

JJennifer Der Torossian-Studley, a lyric soprano from Northern California, began her voice studies with Maestro Salvatore D'aura of Italy, who has trained Jennifer in the bel canto style for 17 years. She received a Bachelor of Music Degree from San Jose State University and after a professional career she co-founded the Bay Shore Lyric Opera Company.
The Metro Newspaper called her “La Coloratura Assoluta” in her portrayal of Lucia in the opera Lucia di Lammermoor. She has been seen as Mimi in La Boheme and Cio Cio San in Madama Butterfly at the Mountain Winery Summer Concert Series, Saratoga. Most noteworthy was her portrayal of Puccini’s heroine Cio Cio San under the direction of Madama Licia Albanese. Critics rave about her performances.
"...a lyric soprano to die for...The voice soars effortlessly and full from
the bottom of her vocal range to the edge of the coloratura. ... As
Rigoletto's daughter Gilda, I cannot imagine any singer doing a better job
on the famed love song aria "Caro nome"
San Mateo County Times, October 26, 2004

As one of the winners of the Licia Albanese-Puccini Competition, Mrs. Der Torossian-Studley performed as a guest artist at the Alice Tully Hall, Lincoln Center, NY. She was a finalist in the Classical Singer Productions Competition where she performed as a soloist at Carnegie Hall. She has also been a featured soloist in Kingston, Jamaica with Season of Excellence ‘97 & ‘98 Concert Series at the Ward Theater as the Cabrillo Music Festival’s Conductors Workshop under the direction of Maestro Gustav Meier.

Jennifer made her professional career debut at age 18 as Gretel in Engle Bert Humperdinck's Hansel und Gretel. She made her 1996 debut in Rome, Italy with the Opera Festival di Roma where she portrayed the role of Susanna in Mozart’s Le Nozze di Figaro Jennifer’s repertoire also includes Miss Rowan in Benjamin Britten's The Little Sweep Mimi in La Boheme, Rosina in The Barber of Seville, the Countess in The Marriage of Figaro, Rosalinda in Die Fledermaus, Gilda in Rigoletto, Violetta in La Traviata, and Fiordiligi in Cosi fan Tutte, Micaëla in Bizet’s Carmen, Lucia in Lucia di Lammermoor , Rosalinda in Strauss’s Die Fledermaus, Leonora in Il Trovatore, Madama Butterfly title role and Donna Anna in Mozart’s Don Giovanni.

Bay Shore Lyric Opera Company will need an electrical outlet access for gigs that require PA systems. BSLO can provide PA system which can include Microphone(s), keyboard (if needed), Speaker(s). Sometimes events take place outdoors in locations that require PA so we can perform anywhere! Churches, Theaters, and Most MPR rooms won't need a PA system unless client request performance during a cocktail party where noise level is elevated.