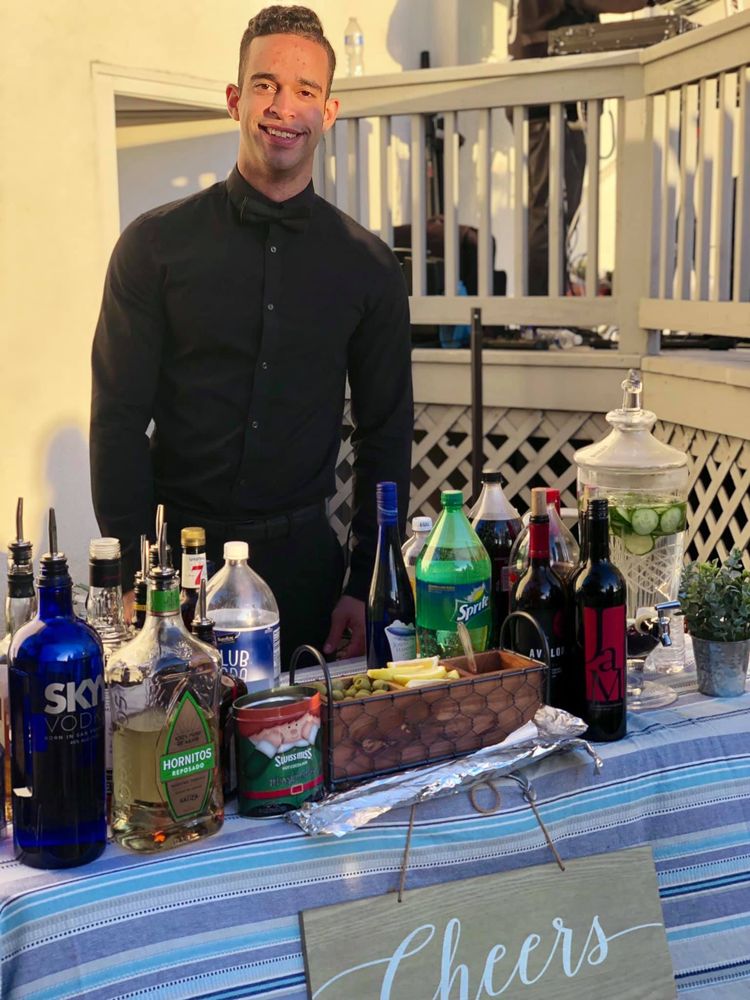 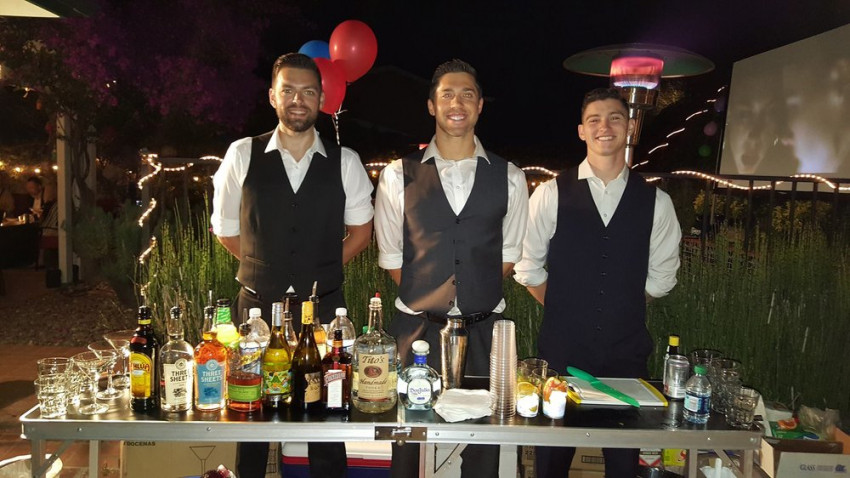 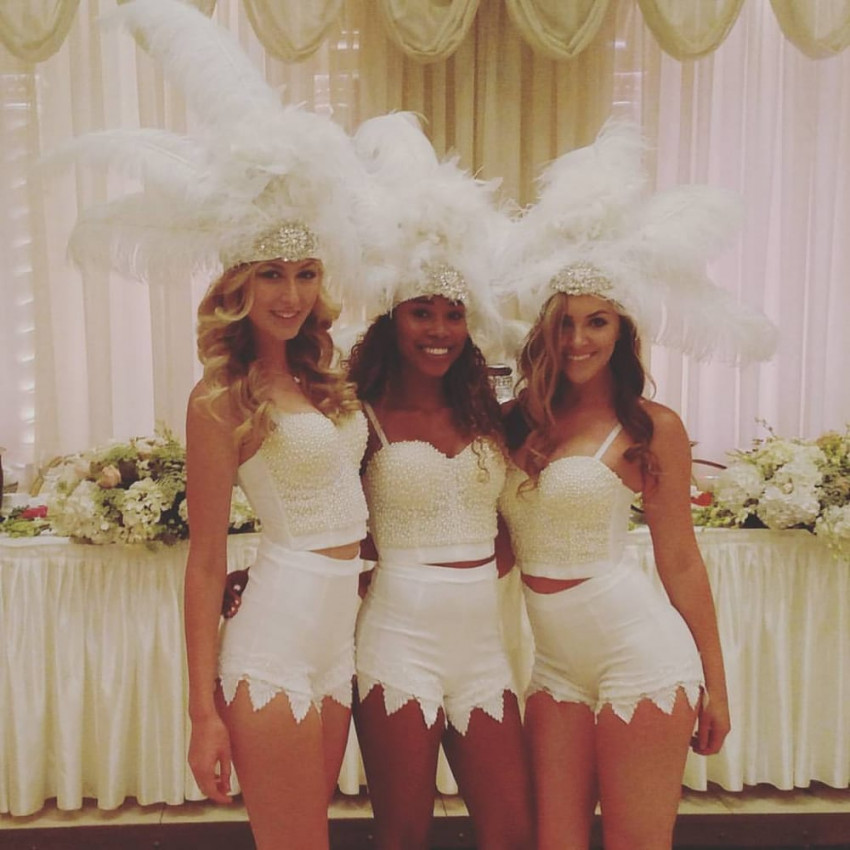 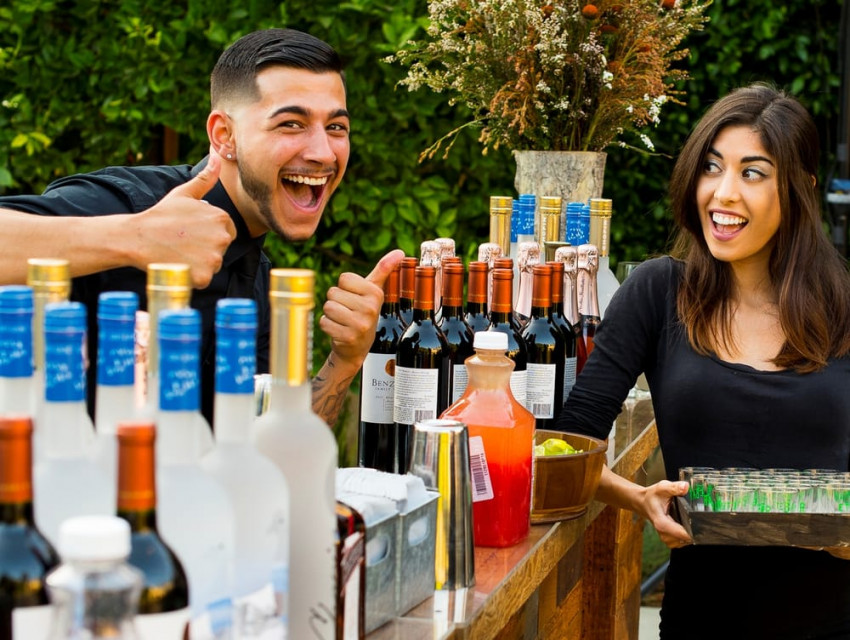 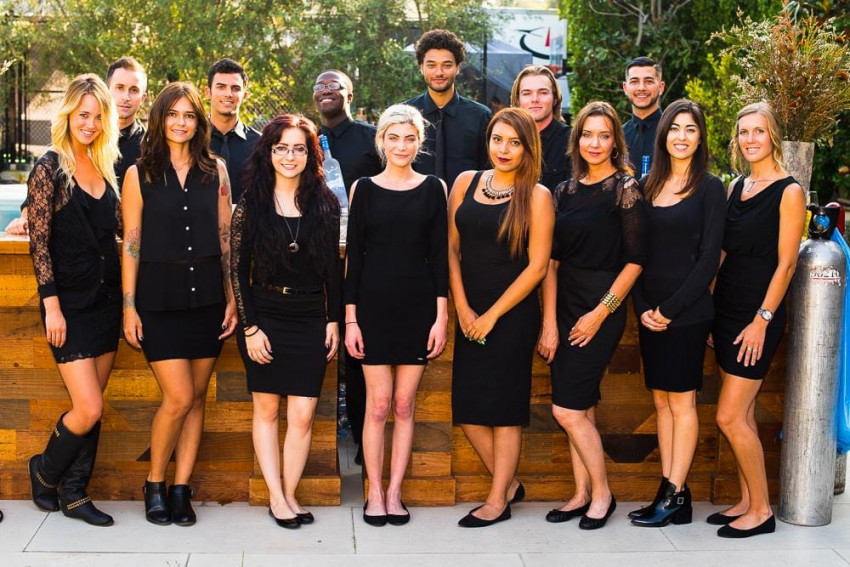 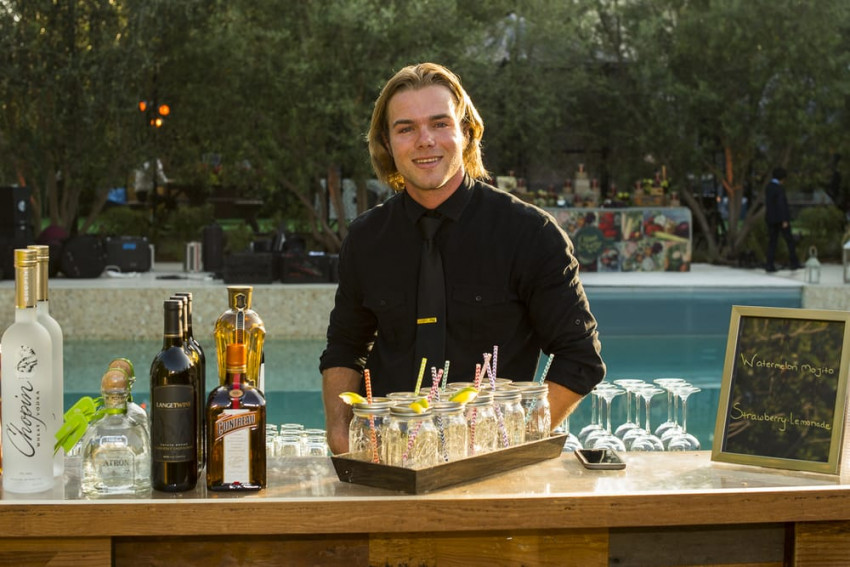 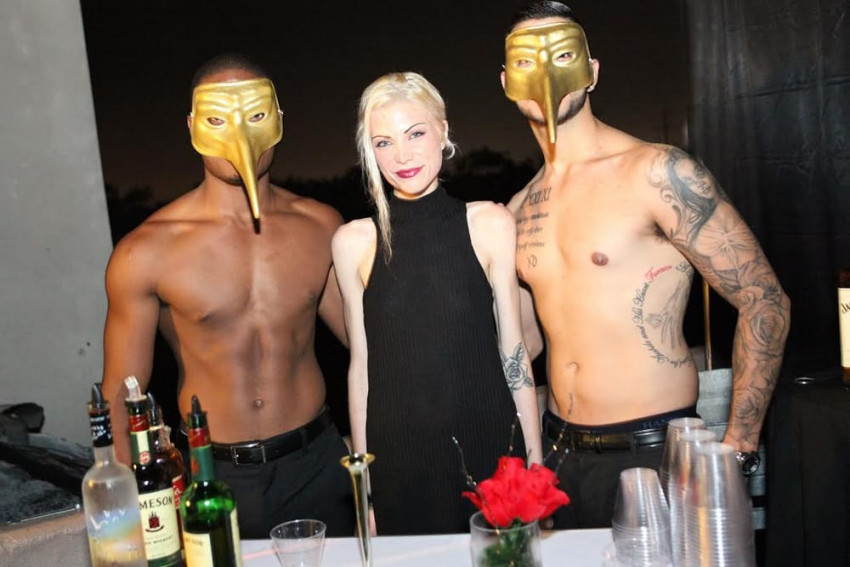 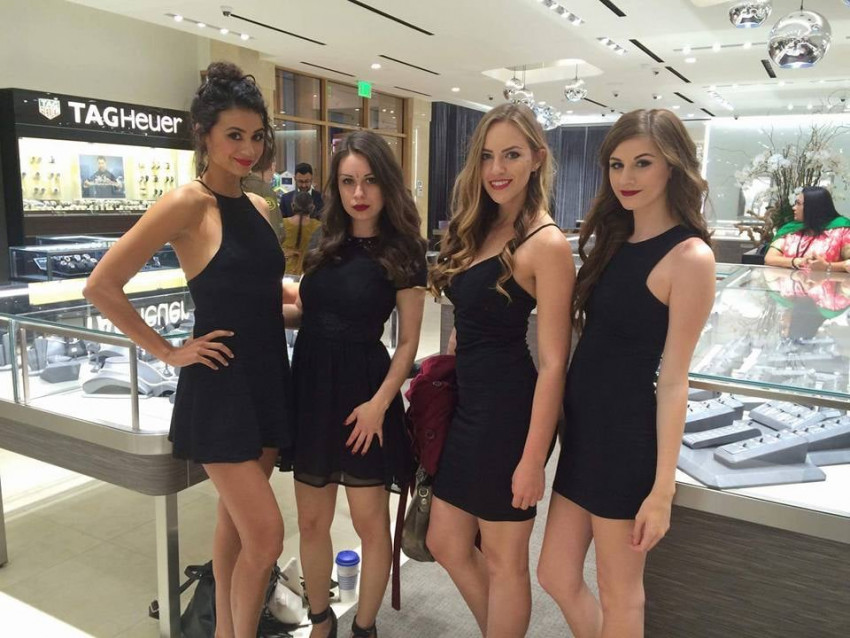 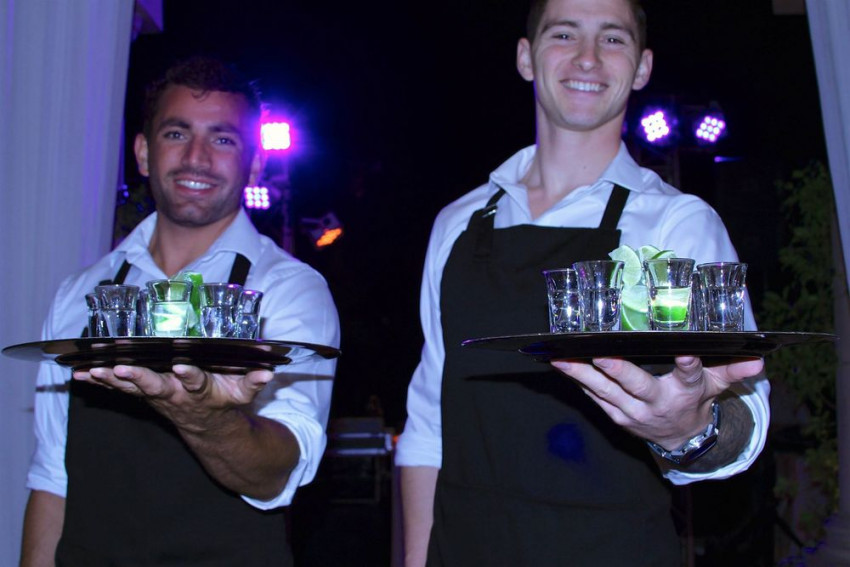 Hi, my name is Paul, I have been a bartender for 9 years and myself and my small team would love the opportunity to serve drinks at your next event; whether it is a birthday, wedding, we'll be there in full bartending attire, with equipment, serving up terrific drinks!

Feel free to call me today to book your event.

Be sure to check us out on yelp

WOW! Can you say amazing, five-star worthy service?? I had planned a 50 person event for my parent's anniversary this last weekend and it was super important to me to make sure the event was flawless. NBS exceeded all of my expectations and helped me throw a truly Gatsby-like event. Their prices were completely fair and everything was explained upfront. The bar staff who worked the event were extremely fun, nice, and an overall great time to interact with. They handled the crowds by the bar perfectly and everyone had an amazing time at my party. Would recommend this company over any other staffing service I have used in the past! A+++ Thank you all!

Hired NBS to staff us with a bartender and server for a party with approximately 70 guests at our residence. They provided Yuki and Jenae who were both friendly, energetic, and experienced at working a crowd. They were a huge hit with the guests. Between the two, they kept drinks flowing, guests fed, and area free of leftover glasses and plates.

Throughout the process I had immediate access to Paul, the owner. He was extremely helpful and replied promptly to my questions. I highly recommend and wouldn't think twice about hiring again.

Paul replied back immediately after I submitted my request and was available to answer questions right away. I booked a bartender & a server the day before my event and he was able to get great people. I'm so glad we decided to hire them because they truly made the party great for the guests and for my wife & myself. It was a surprise party so things were a little chaotic but both Nand & Kylee were extremely flexible and friendly. Will definitely use this service again!

Paul's team did a great job for our holiday party. We appreciated how knowledgable and professional the bartender was. He arrived on time and well dressed. He added a nice touch to our party. I look forward to working with them again.

We had Sam over as our bartender yesterday for an intimate dinner and birthday party I was throwing for my husband's birthday, and she really made it even more special. She was really personable, friendly and always willing to go the extra mile. I'd misjudged how much ice I would need for the cocktails and she offered to pick more up for me and bring it over. All the cocktails were amazing and our guests were raving about them and about our bartender! Thank you for making our dinner so memorable!

Great experience with my bartenders

Put in a last minute request for a bartender after being cancelled on by another company.

I spoke to Mandy over the phone and she was super helpful and accommodating about the whole situation. The bartenders were able to bring all the supplies needed for the party and were more than prepared to deliver a great experience too. The drinks were also really good which was a plus.

The good, the bad and the ugly.

The good, the bartender we were provided came on time, was well dressed, and wonderfully pleasant and courteous. Absolutely everyone at the party loved her. Personality a ten.
The bad, she came ill-prepared for a cocktail party. No pour spouts or juice bottles, and no pre-preparation on the cocktail menu at all. Although our menu consisted of just 5 simple, two to four ingredient prohibition cocktails, and though we provided our menu to the service a couple of days before the party and were told it was forwarded to our bartender, our bartender, had barely glanced over the menu before she arrived. She had no idea about recipes, or portions, or garnishes. I even had to instruct her on how to mix the drinks, when to shake and when to build (Hint, you shake citrus drinks, and you build drinks with carbonation. Bartending 101, and I'm no bartender.) Fortunately, we only had one type of glass to use.
Of course, this was after we had to research drinks ourselves, because the best suggestions we were given for a prohibition party were Manhattans, Old Fashions and Cosmos. Not bad drinks, but not much for prohibition era drinks, which were mainly gin based, and bathtub gin at that.
Unfortunately, the lack of recipe portion control led to running our of certain mixers too early (i.e., cherry liqueur), as well as some pretty ugly drinks, both looking and tasting.
In the end, if we were only serving beer and wine, this would have been a top-notch service, but as we were looking for some help coming up with a drink menu, and a bartender with cocktail experience, we were rather disappointed.
Of course, all of this could have been avoided with a few simple texts or emails between us and the bartender, but as we weren't allowed to contact our bartender until she arrived at the party, these types of things can happen. Unfortunately, this time it resulted in a sub-par service.

Overall I had a great experience with this company. They were very friendly and responsive and sent a great, friendly bartender! The only thing keeping from a 5-star review is the company did not communicate with the bartender ahead of time regarding the specialty drinks she would be making. I requested 3 specialty drinks (for which the company sent a shopping list - super helpful!) but the bartender had never seen the list and had never made the drinks before. If she was provided the list ahead of time, she could have memorized the ingredients and practiced the drinks to be more prepared. She would have also been able to make the drinks a little quicker. The bartender did great with the last-minute information though and overall we had a great night!

Response from Bartending and Waitstaff:

Sorry about that Theresa, we emailed the drinks to your bartender, but I just learned your bartender doesn't check their email daily and I should have just texted to the drinks to her! Completely my fault, but glad it all worked out! It will be a 5 star on the next one!

Perfect addition to the party

I wanted to really express how happy I am with the decision I made to go with NB Staffing. They definitely prepare you to be to be ready for anything and are straight to the point. They give you all the details up front before staffing you, and make sure you are well equipped before hand. There is no jumping through any sort of hoops, they are very direct and communication is key. You get paid on time, effortlessly. They definitely are reliable. I highly recommend them for work.

Our mixologist was great.

I connected with Katie about booking and she was easy to work with. We booked two bartenders for our house party. They were very nice and knowledgeable about the drinks they were serving. Their names were Bryan and Daryl I think. I really enjoyed the service and the hospitality. Katie sent me a shopping list because I bought all of the booze. Overall very easy and enjoyable.

Response from Bartending and Waitstaff:

Thank you Scott, we look forward to working with you again!

Hi, my name is Paul, I have been a bartender for 9 years and myself and my small team would love the opportunity to serve drinks at your next event; whether it is a birthday, wedding, we'll be there in full bartending attire, with equipment, serving up terrific drinks!