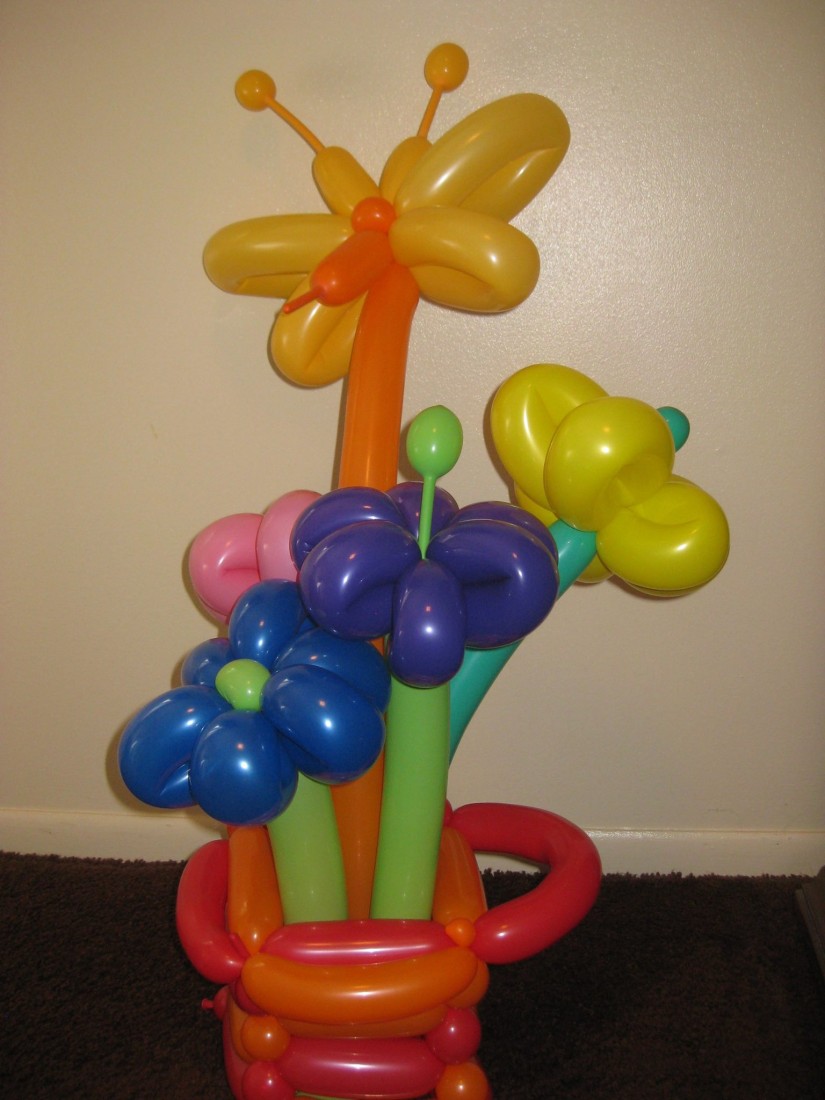 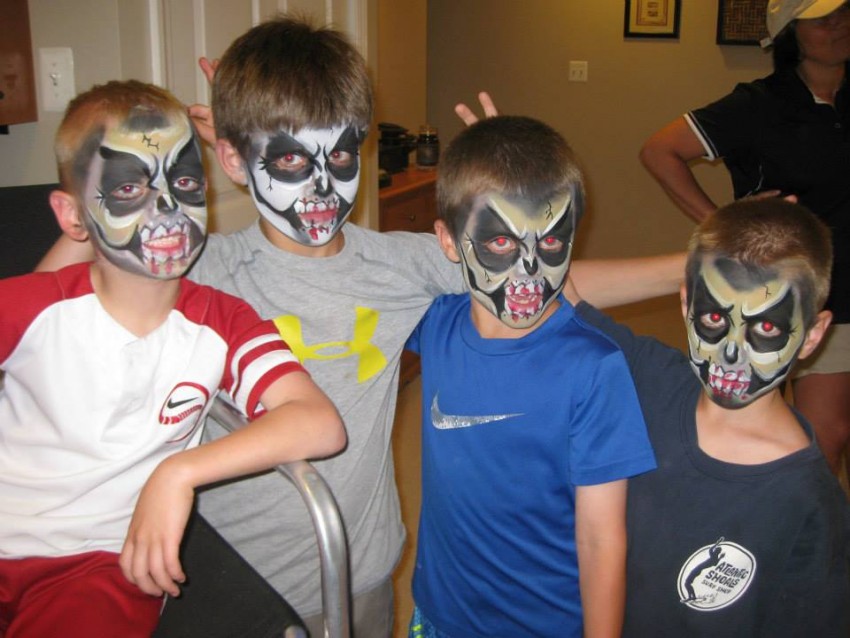 Boys with their faces painted 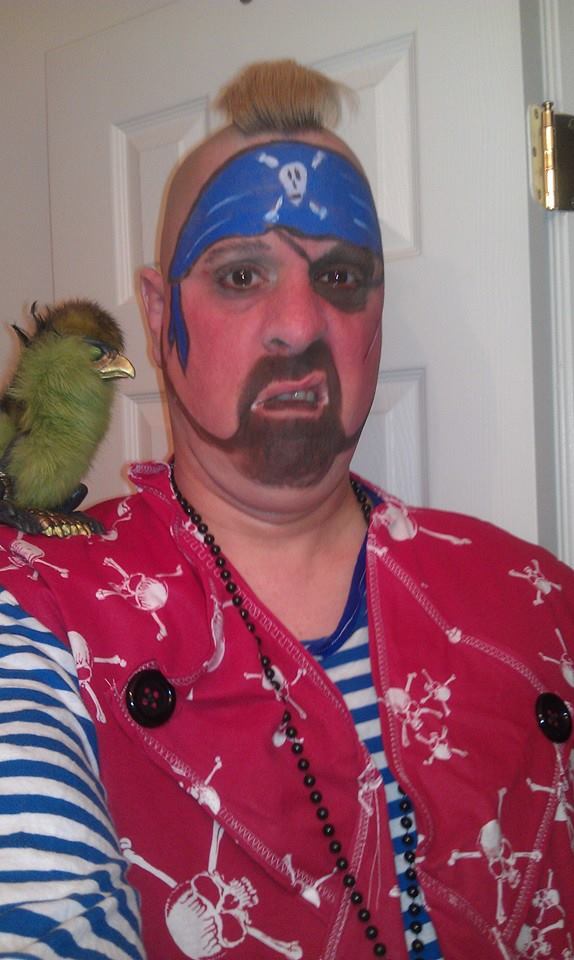 Looking for a clown, balloon twister or face painter in Northern Virginia? Mike Becvar is a professional children's entertainer. He enjoys entertaining kids of all ages and would welcome the opportunity to come to entertain at your event.

Mike is often hired to make balloons and paint faces at birthday parties, corporate picnics, festivals, and other events. When painting faces, he is able to paint about 15 full face designs an hour. Some of the designs the kids like most are his tiger, dog, cat, butterfly, and skeleton. When twisting balloons, Mike can make up to 25 balloons in an hour. When not as rushed, he can make fancier designs such as superhero, alien, princess, and unicorn.

Mike worked tirelessly for the whole event. His face painting was beautiful and very fast. Balloons were also above and beyond what we expected. We would absolutely recommend Mike! There were a lot of happy children and their parents. Thank you, Mike.
Linda Weiss, ERA Teachers, Inc. Real Estate

Response from Balloons By Mike:

Thank you for having me at your event. I am glad that everyone had fun.

Mike was the center of attention for my daughter's birthday party. He was excellent with the kids and would highly recommend. He was on time, great with communication, and great value for the service. I would use Mike again in a heartbeat.

Response from Balloons By Mike:

Thanks for inviting me to your party.

Insurance: Mike has entertainer insurance through the World Clown Association

Mike offers face painting and/or balloons to the guests at parties and other events. Both activities are mainly for the children 3 and older. The amount of time required depends on the number of kids expected at the party and the activity selected. When doing face painting, Mike normally estimate that one hour is enough time to paint about 15 faces. Face painting does requires some additional time for setup/cleanup. When doing balloons, Mike normally estimates that one hour is enough time to make balloons for a maximum of 25 kids. With fewer kids at the party, he can make bigger, fancier balloons. When doing both face painting and balloons, 90 minutes is enough time for about 15 kids.

Mike is able to come to the party as himself of a few other characters including: Sir Toony Van Dukes the clown, Pirate Mike, Super Mike, and Astronaut Mike. Given proper notice, he might be able to come up with a few other generic characters.

Mike Becvar is located in Northern Virginia and entertains children as Sir Toony Van Dukes the clown and Balloon By Mike. Mike started his career by learning how to be a clown when he attended Mooseburger Clown Arts Camp in 2008. He returned to Mooseburger Clown Arts Camp in 2009 and since then, he has attended many other clown conventions and continues to learn new skills, designs, and techniques on a regular basis. Today, he is an entertainer with many skills, but is most often seen at events making balloons and/or painting faces. He loves to make balloon creations including hats, animals, and other fun objects. He also does face painting from simple cheek/hand art to full face designs. He works at picnics, birthday parties, family reunions, restaurants, grand openings, or other community events in Northern Virginia where kids are gathered.

Mike has a regular restaurant gig where he paints faces and twists balloons for the kids who come to Moe's Southwest Grill on Kid's Night. He has been visiting Moe's every other Tuesday night since 2010 and is known and recognized by many of the families in his community.

Mike is active with the local clown community. He is currently the President of Just Clowning Around of Northern Virginia, a club for clowns young and old. As a group, they participate in several local parades and volunteer their time for selected charity organizations. He is also active with the Kapitol Klowns in Maryland.

Balloons and face painting are mainly for the children 3 and older. Balloons can pop and could become a choking hazard for children who put things in their mouth. For face painting, young children may not want to sit still with their eyes closed while an unfamiliar adult attempts to paint their face. It is best to wait until the child is old enough to want to have their face painted.

Both face painting and balloons require space to setup supplies. When working at an outdoor location, it is important to have a flat and level spot under a shelter or tent.

With both balloons and face painting, the latest movie or cartoon often influence the designs the kids request. Mike is active on several social networks where he is able to exchange designs and idea with other entertainers around the country.