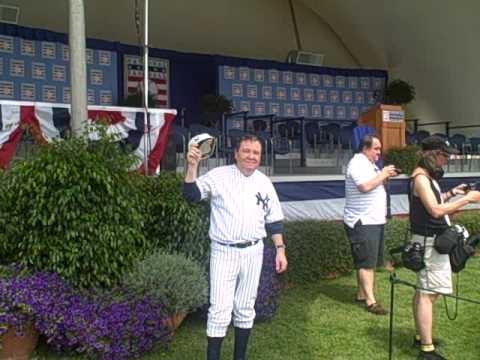 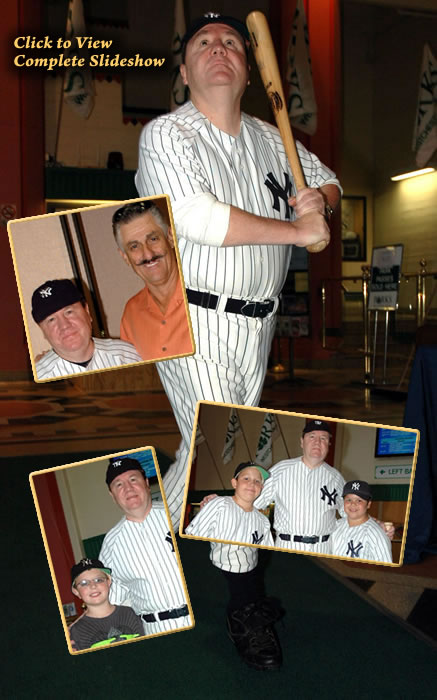 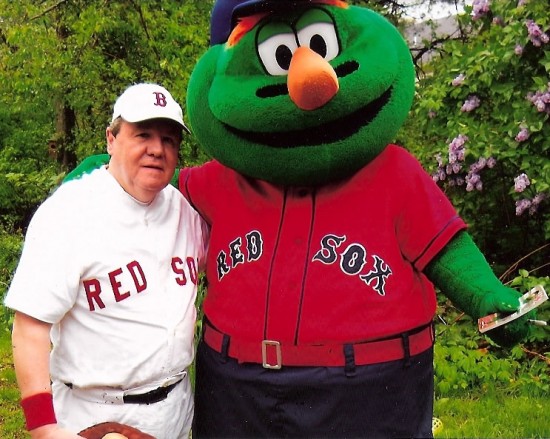 The Babe with Fenway Park's Mascot, Wally the Green Monster 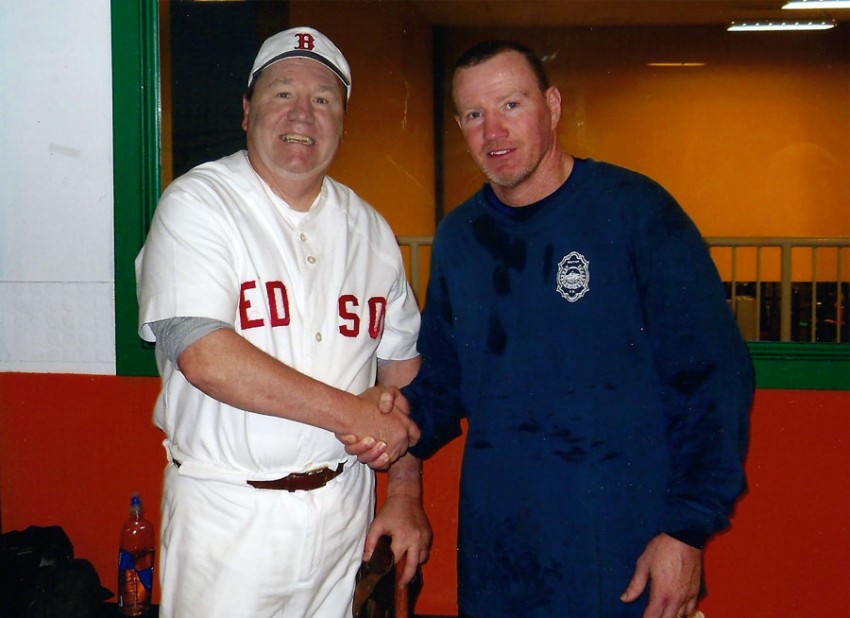 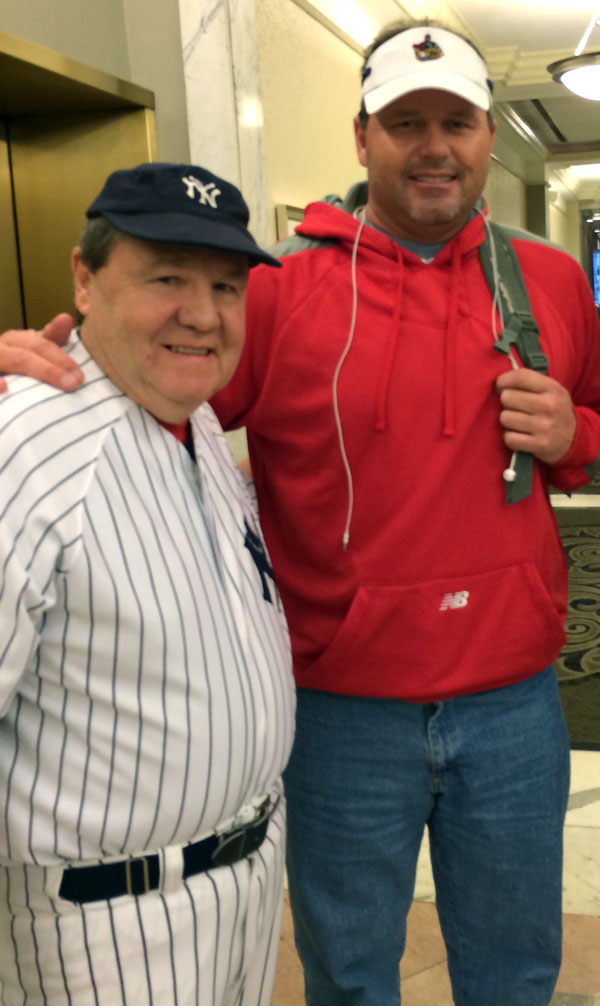 The Babe and the Rocket 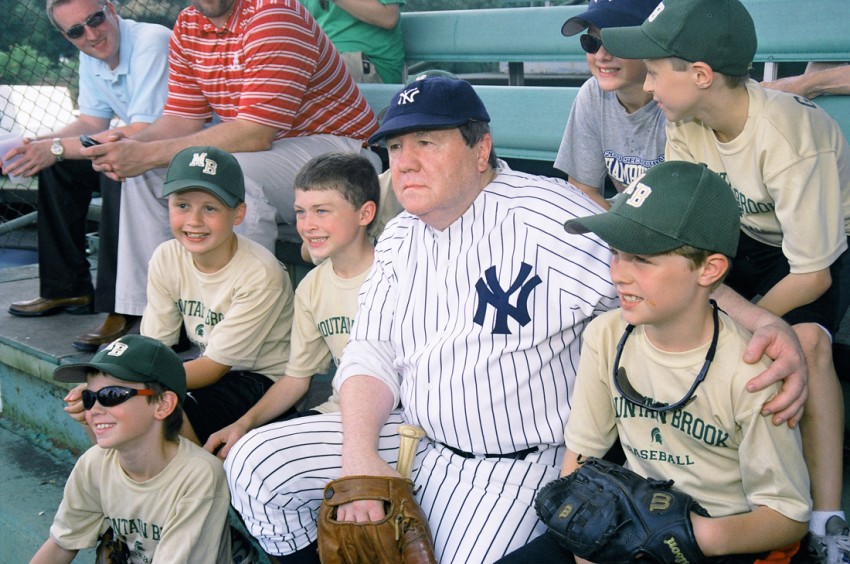 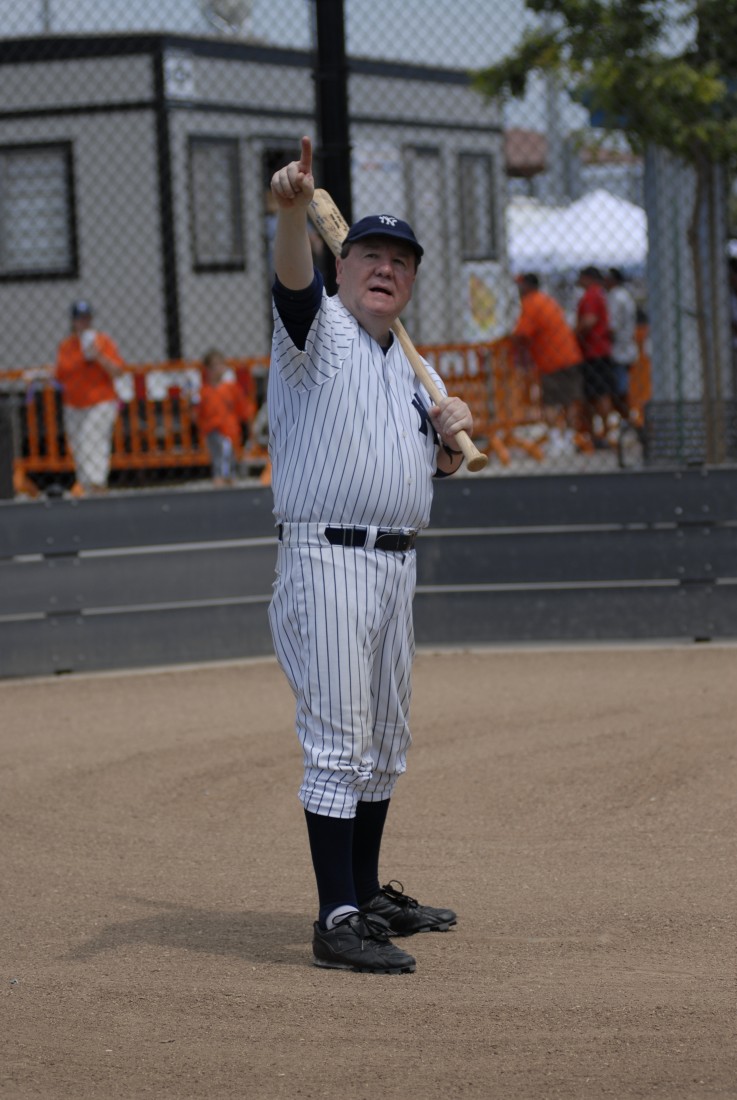 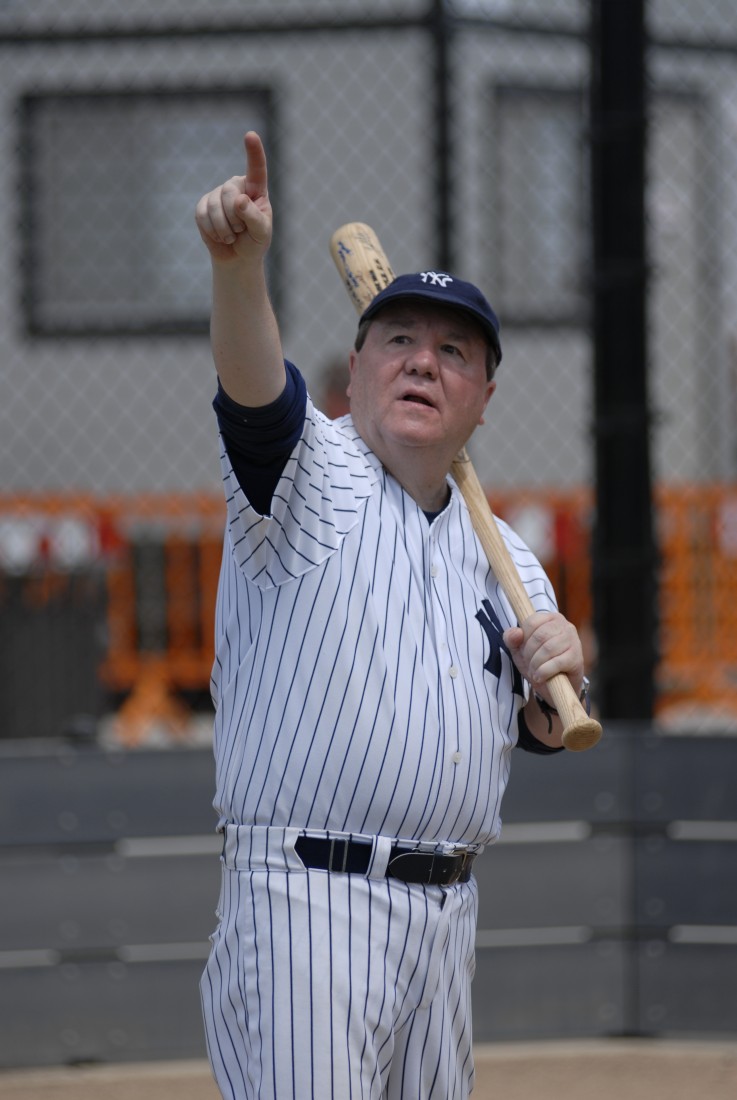 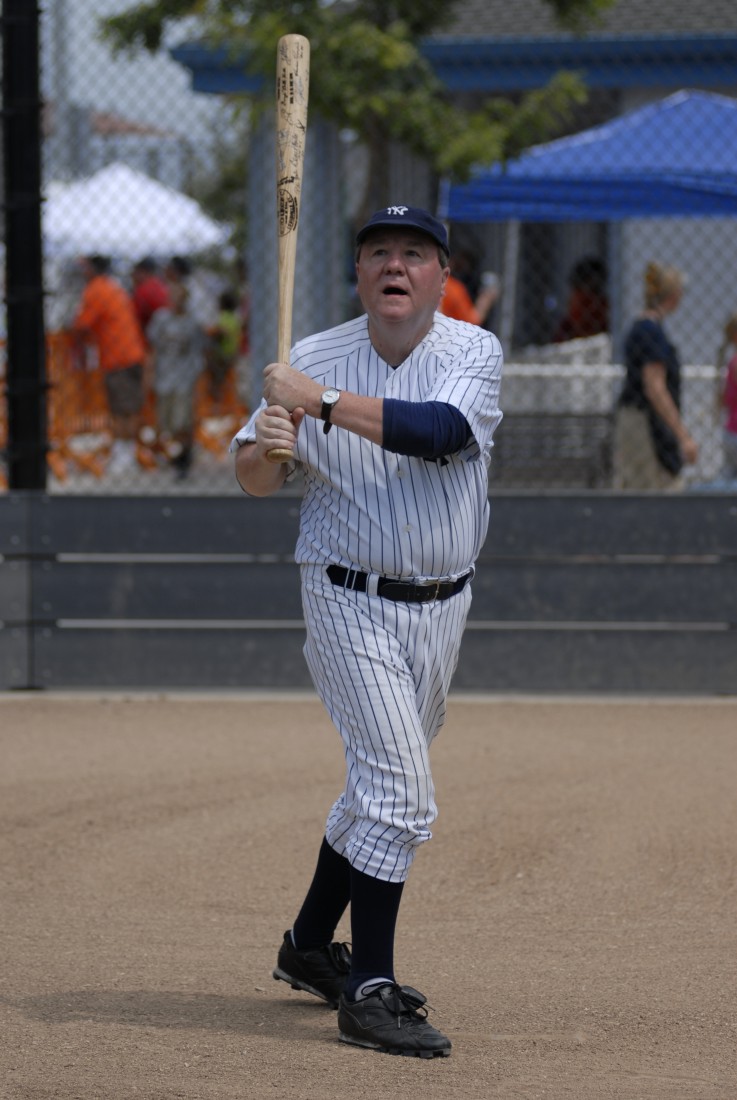 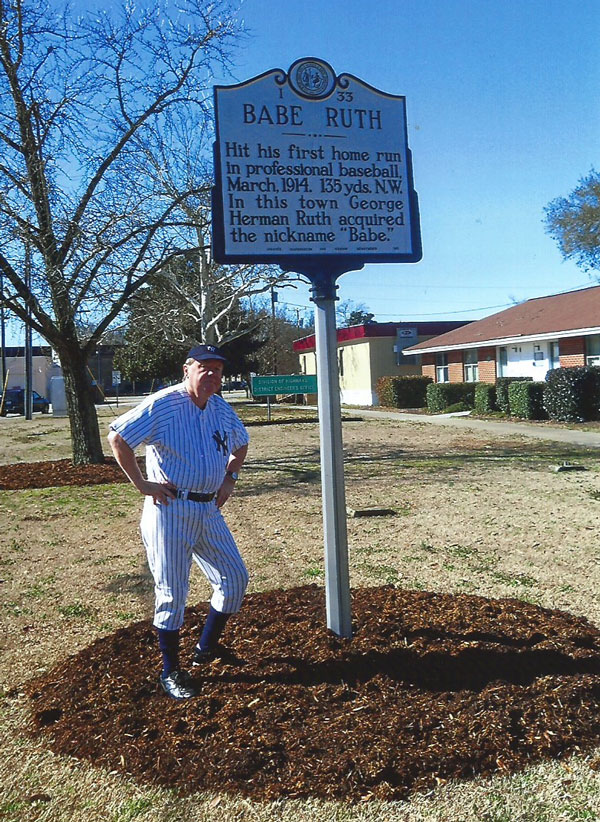 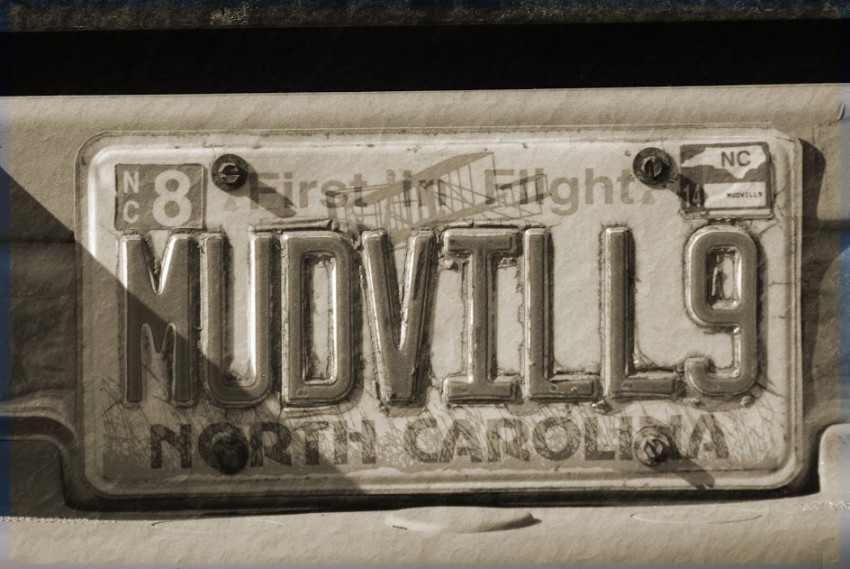 Invite "Babe Ruth" to your next public event and watch the magic! Over the years Steve Folven was constantly hearing, "You look just like Babe Ruth!" As a lifelong baseball fan and fledgling actor, Steve donned his vintage Yankee uniform and gave it a go. His first outing at Cashman Field in Las Vegas netted him a full color photo in the local paper as well as countless requests for photos!

Babe Ruth for your next sports themed event

We would highly recommend "Babe Ruth" to anyone that is having a sports themed event or for educational purposes. He was part of my son's Yankees themed Bar Mitzvah and did a fabulous job interacting with the kids and adults. He was professional, courteous, and knowledgeable. His appearance was spot on. How cool would it be to surprise your guests when Babe walks out. Our guests are still talking about their weekend hanging out with Babe Ruth.

The Babe came to my son's Bar Mitzvah which had a baseball theme. He was loved by all (including the few Red Sox fans we were forced to invite). He was a big part of the party and couldn't have been better with all of the kids and especially the adults.

Great time thanks to murray .Babe loved being" an honarary jew" for one night!

Steve Folven a/k/a Babe Ruth attended the Rickwood Classic to entertain the fans. The Classic is a weekday baseball game held each year in Birmingham Alabama between the Birmingham Barons and a Southern League opponent .Steve wandered around the park on his own for about 4 hours posing for pictures ,signing autographs and generally being a nice guy.We had a crowd of 10,000 on a Wednesday afternoon .Steve's appearance was such a hit that among many dignitaries and special events going on at the game he was selected by our local newspaper as the front page image of the Rickwood Classic.As chairman of the Classic it was my idea to bring him in.I am extremely glad I did.I would highly recommend Steve Folven a/k/a Babe to anyone who is considering making an event more special.

Hired as:
Impersonator
Write a Review

Steve Folven arrives at the event performing as The Babe in his authentic Yankee uniform. Depending on the type of event, he can assist with event activities. Most importantly, he connects with the fans young and old, posing for pictures, telling stories and signing "autographs."

His family moved to Lowell in 1952 where Steve attended Immaculate Conception Grammar School. He went on to Keith Academy, a small catholic high school for boys run by the Xaverian Brothers, graduating in 1966. Babe Ruth lived in an orphanage in Baltimore, Maryland, run by the Xaverian Brothers. Brother Gilbert, who was instrumental in Babe Ruth’s baseball development, taught and coached baseball at Keith from 1046 to 1948.

Steve graduated from Merrimack College in North Andover, Massachusetts in 1970 with a BA in Social Science. He received his MSW from Boston University in 1981. He currently works in the Social Service field in Lowell Massachusetts.

Impersonation Skills:
Knowledge of the Game:
Growing up less than 30 minutes from the Legendary Fenway Park no doubt contributed to Steve's life long passion for the game of baseball. To some, a Baseball Maniac, Steve has extensive knowledge of current and past players and their statistics, especially Babe Ruth.

Connecting with People:
Steve has been a social worker for over twenty-five years, working with clients ranging from children, families and seniors to developmentally disabled individuals and prisoners. He coached youth baseball and is involved with the Big Brother Program.

Acting Experience:
In September 1979, Steve wrote and acted in a comedy skit entitled “Welcome to Social Work School”. He did impressions of Howard Cosell and Steve Martin.
He appeared in the Waltham Massachusetts Hovey Players Community Theater as Major Domo in a production of “Dangerous Liaisons" in January of 2006.

On the Job Training:
Steve headed the celebrities who participated in the Eddie Andelman’s Hot Dog Safari an annual charity held at Suffolk Downs race track in Boston, Massachusetts. At the event he performed a radio segment with the venerable radio personality, Eddie Andelman. See the Appearances Page for more on this event.
Steve also did a comedy appearance with Steve Sweeny on a live TV broadcast on CN8.

Ask Steve what is his most important qualification for Babe Ruth Impersonator: "I love meeting and talking to the fans, making them happy. THEY are what this is all about."

Long-term Goals: To be the honored guest at the New Yankee Stadium

An avid baseball fan since childhood, Steve Folven knows the game and its history, inside out.