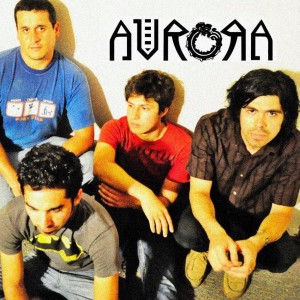 AURORA is an indie rock/grunge/live band (LATIN)
We give a great live performances
We also play rock covers in spanish and english.

Be the first to review Aurora

Rock in spanish like you've never experienced live before.
Lots of energy and good music.
The ressurection of grunge music.

Originated in San Diego. Aurora sounds to a genre of alternative rock. It is integrated by Ruben (vocals/guitar), Bernie (guitar), Mario (bass), Eri (sax/keyboard) and Francisco (drums). Looking to give a twist to the Mexican rock, they share the experience of mixed feelings and deep travel in his lyrics and music.

On 2008, was born the Aurora project, first emerged as an idea between 3 cousins: ‘’to form a rock band’’. Ruben (vocals/guitar), Mario (bass) and Bernie (guitar) began the road to find his music and adapting it to their style. ‘’Las Insolitas Imagenes de Aurora’’ (The unusual images of Aurora), a band that was headed by Sal Hernndez our greatest icon, where arose the name of this band was. Tribute or honor to one of the major influences that Aurora may have had since its inception. In 2010, Aurora consolidated with the presence and contributions of Heribert and Francisco, who joined the band, introducing the sounds of saxophone, percussion and keyboard, as well as a renewal to the beat on the drums.

Aurora has shared stages with artists of the stature of Pastilla, DLD (dildo), Outernational, Flores Acidas, Caifanes and Los Enanitos verdes, also has taken part in massive events such as the 6th TJ Beerfest, Festiarte 2011 and 2012, Mexicali on the beach 2011 & 2012 and the grand finale of the war of bands in 2011, just to mention a few. It has also participated in alternative rock/session cycle in the ICBC, with its own session and first own concert in April. This 2012, Aurora began with many presentations, including the Carnival of Rosarito 2012, at the CECUT on the Tijuana Suena Festival and the opening of a section of the waterfront brodwalk in Ensenada. Also started to performe in San Ysidro and San Diego, California.

At present, Aurora is in the process of recording their first album, which aims to exceed expectations and so share it with the world. Also is about to launch its first video very soon.

we have an stage plot, if its necessary, send us your email and we mail it to you.