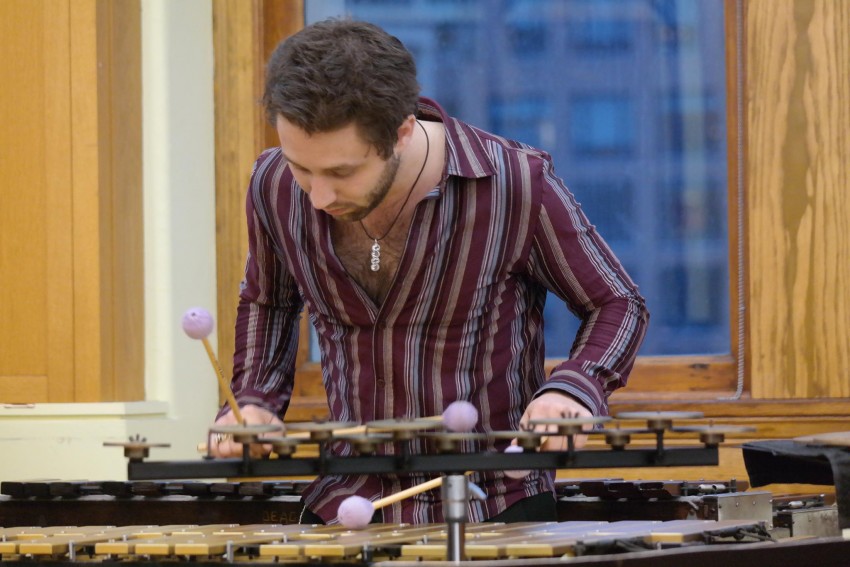 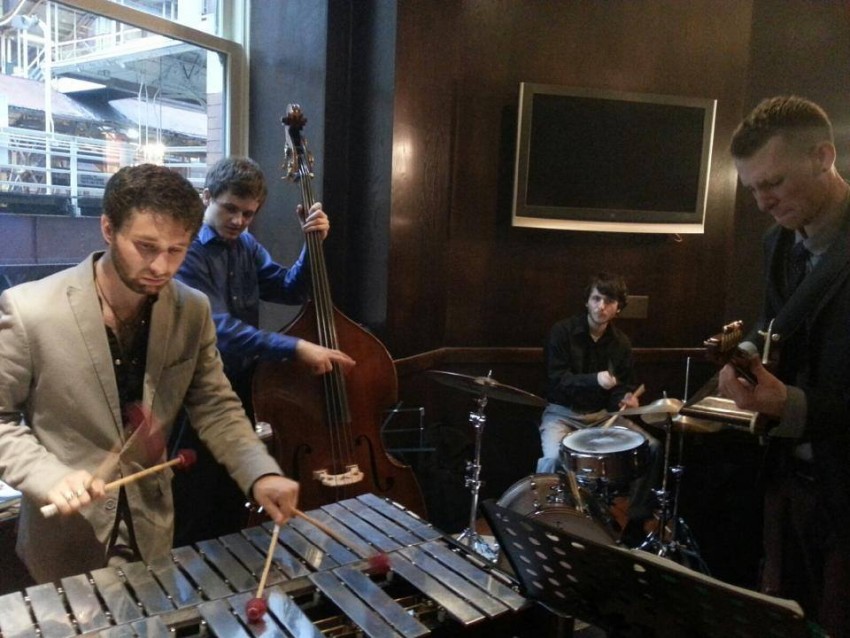 Jazz Vibraphone, Steelpan, Drum Kit, Timpani, or anything percussion. I play solo (acoustic), solo (with tracks), or in ensembles (mine or yours!)

Recently, I went to hear some good live jazz in the suburbs of Chicago and stumbled upon Anthony playing the vibraphone with a band in a Lake Villa resort tavern. He stole the show with his ability to harmonize with the other band members and his featured solos. His incredible talent is exceptional and I would recommend for any and all social events. I have a whole new appreciation for the vibraphone as well.

Not your average back ground music!

Anthony was hired to perform back ground music at our corporate cocktail reception. We wanted something a bit different than the traditional piano music and Anthony definitely delivered...what a pleasant surprise! He was fun, interactive and always professional. Our guests were delighted with the music Anthony played and our event planning team was very pleased with our decision to hire Anthony!

Thank you Kathy! It was so great seeing people from all over the world in town for your event! Pleased to have been a part of it. --AJH

A Genius Talent. He can do it all.

Anthony went way beyond anything that was expected of him. He became so needed as a part of our project that he became family.
He comes with so much skill, and knowledge of his own craft and that he moves quickly and proficient to make the changes you would need for your event. He owns a lot of equipment. A LOT. Any sound you're looking for he can come through with for you. I hired him for a Musical with a theatre company. I couldn't imagine the show without him.

Thank you so much, Chris! It was my pleasure to be part of the show. Coming in and seeing the fantastic direction you had already led your excellent actors in was thrilling. I was very pleased with the final performances and excited to have met all of you. Hope we can work together on more productions!

On Monday December 5th, 2016, Anthony Jay Houston performed at Franklin Monroe Schools for all students in grades 7 and 8. He provided a mixture of vibraphone and steel pan music for the students, and taught them a brief history of each instrument. Houston engaged the students throughout the assembly, keeping their attention and entertaining them while educating them about the instruments. It was an outstanding assembly for the students and I would whole heartedly recommend both Anthony Jay Houston and the entire Potts and Pan Steelband organization.

Best of the best

I was blown away by the custom arrangement and the original piece that were put together for my wedding ceremony. They were beautiful and brought us all to tears! Anthony J. Houston did an amazing job communicating with us in throughout the planning process. He played the vibraphone beautifully and the ceremony and then kept the party going at the reception as well.
Great job! would definitely hire again and recommend to anyone.

Thanks Elizabeth! Your Ceremony and Reception were both awesome, I was thrilled to take part in your special day!

Literally the perfect addition to our ceremony

I was looking to add something special during our ceremony I found the exact thing I was looking for! My fiancée and I were looking to add something to our wine ceremony (thing during our actual ceremony) and Anthony Houston, a member of Potts and Pans suggested he could arrange a unique piece for us and just wanted to get my opinion on a few piece of music. I met with him and listened to several pieces from various jazz musicians, gave him my opinion on them and stated clearly what “feeling” I was hoping for. I knew he played the vibes, wonderfully I might add, and knew the piece would be played on that. Day of the wedding and he has already spoken and conversed with the officiant about timing, speakers were tested and set up, microphones worked, and when the time for the wine came Anthony stepped over to his instrument and played a beautifully arranged piece that was exactly on mark to what we wanted. I was never once disappointed in the professionalism, expertise, or value of this group and would definitely seek them out again if I am looking for some good music to be played for a special occasion!

Anthony is a wonderful musician--talented, flexible, creative. He provided a wide variety of music, including some last-minute creations. We were so lucky to have him with us. He plays with such expression and passion, communicating flawlessly with a diverse audience.

Thanks Teri! I had a great time playing for everyone :)

Any performance provided here is entirely customized for the client. If you want Solo Vibes, or you want a full Steelband, or a Jazz duo, or anything else, Anthony Jay Houston will put together the show YOU want. Background music? No problem. Evening Concert? No problem. Special tune requests? No problem. Once you decide what you want in your performance, what you will ALWAYS get with Anthony Jay Houston is professional quality music, clear communication before and leading up to the event, early arrival and set up, and happy guests enjoying a great performance!

Anthony Jay Houston is a Percussionist in the Chicagoland Area. Not only is he a double-degree holding musician (BA in Music Education, University of Dayton. MM in Percussion Performance, Roosevelt University), but he is a frequent and accomplished performer. Houston's music is mostly rooted in jazz, but style is not a limitation for him -- if you ask him to play something, he'll either be ready to do so, or he'll learn how! Houston performs mostly on Vibraphone, and works to incorporate the instrument in as many musical settings as he can. He also plays steelpan and other percussion instruments. At a typical solo performance, Houston will bring his Vibes, his pans (double seconds), and some backing tracks and perform a mix of solo acoustic pieces on either instrument and fully arranged pieces with backing tracks. For extra fun, he sometimes will even bring along his looping pedal so he can lay down an accompaniment on the vibes, then play a tune on pan to the "live" backing track.

Beyond Solo performance, Anthony works extensively with Potts & Pans Steelband. If you want the full Calypso experience, you don't need to travel to Trinidad, it's right here in Chicago with Potts & Pans. Anthony can give you a taste as a soloist, or bring out a P&P ensemble for any event. Potts & Pans is THE steelband to hire for ANY event!

Anthony is also a founding member of the Jazz Quartet Totem. Totem grew out of the desire of 4 Roosevelt Jazz Students wanting to continue sharing their music beyond the halls of the Chicago College of Performing Arts. Vibes, Guitar, Bass and Drums come together to play originals, standards, and standards in an original style with Totem. Heavily influenced by the ECM record label, Totem's favorite artists are Joe Henderson, Joe Locke, Carlos Antonio Jobim, and too many more to count.

Beyond the Jazz and Calypso, Houston plays pretty much any percussion instrument. The big ones, Timpani and Drum Set, are ready to go, along with a wide selection of latin percussion and hand drums from around the world. Of course, if you are looking for something he hasn't had a chance to learn yet - he'll learn it for you!

In most cases, performance will require some type of cover from the sun (for the instruments protection) and some type of power (an extension cord will do!) Naturally, if this is a problem, I'll work with you to find a solution!