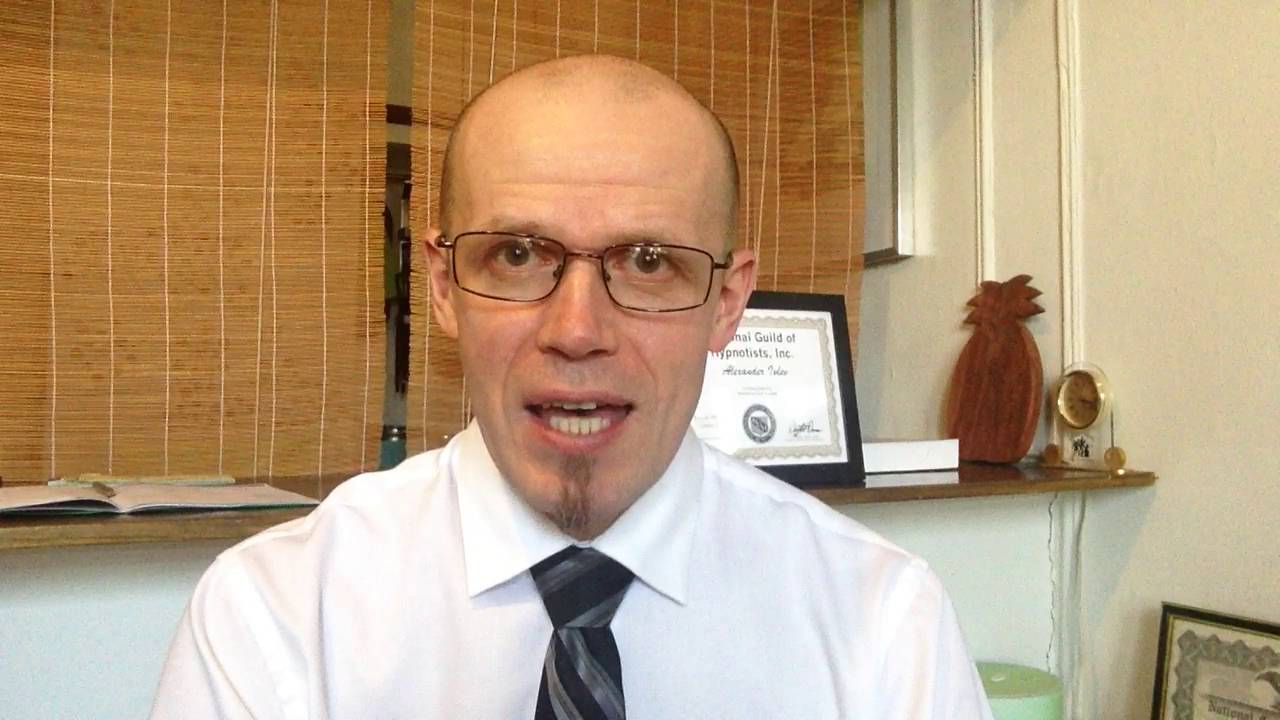 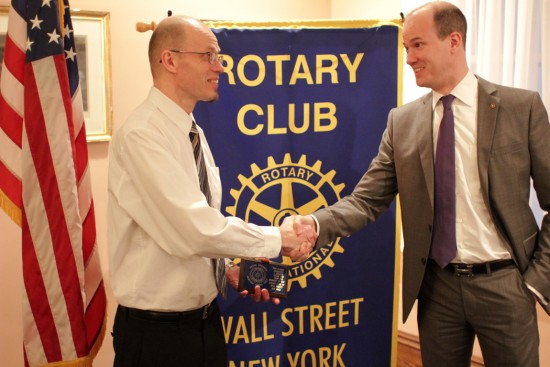 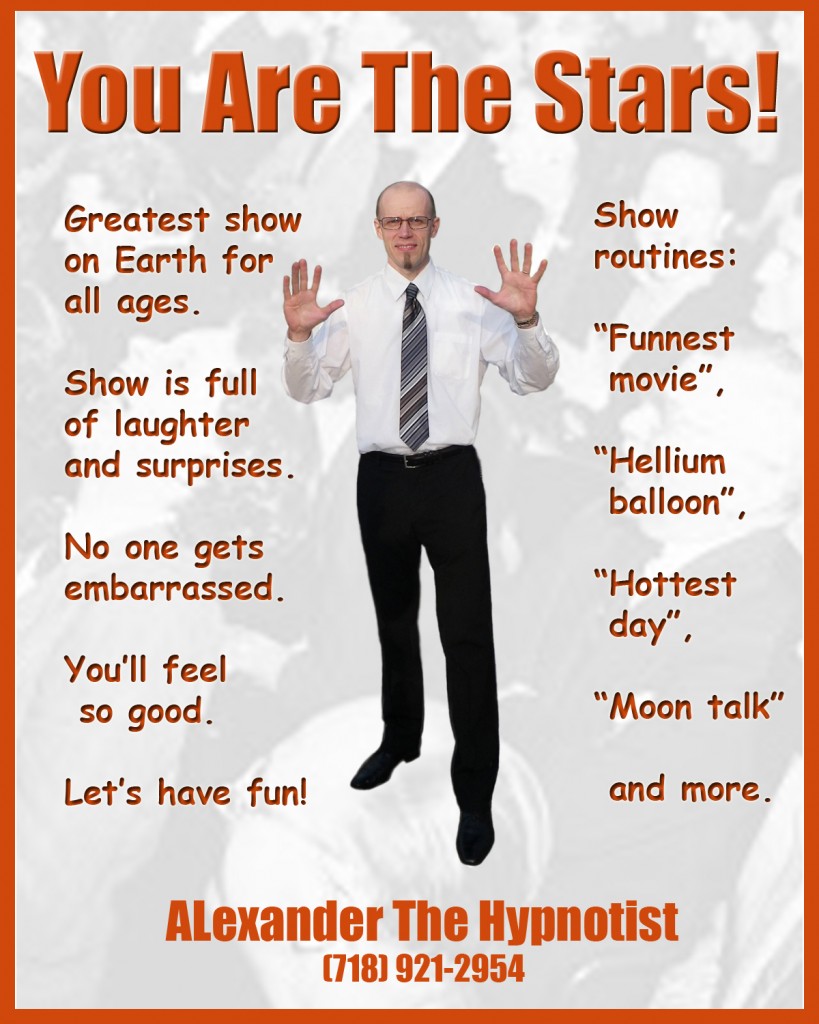 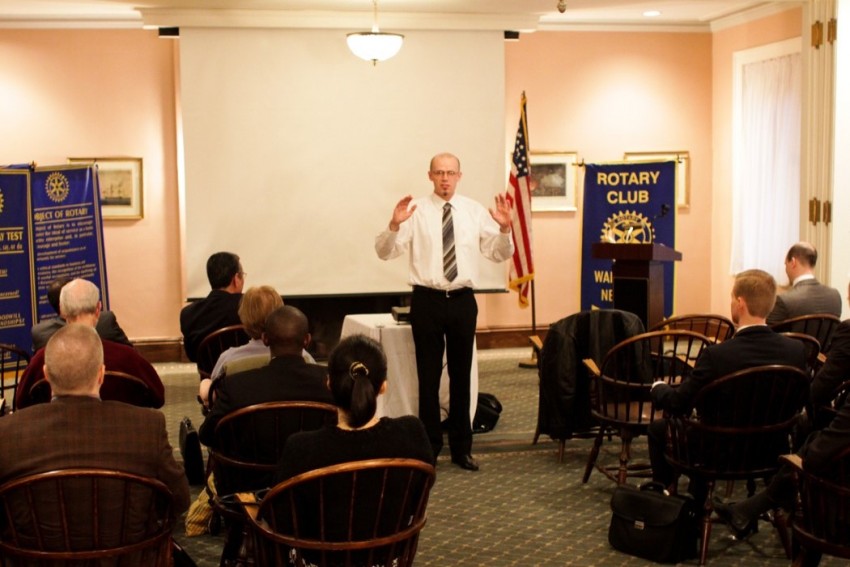 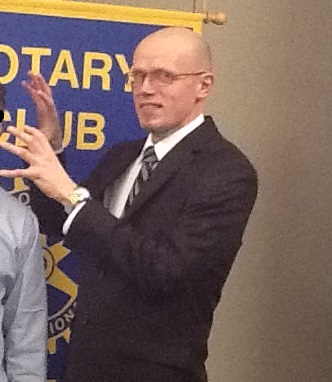 Alexander Ivlev doesn't hypnotize nobody, he just tells special words and gives simple instructions. People hypnotize themselves. All hypnosis is self-hypnosis. Anyone who responds well to suggestions can be hypnotized.

Be the first to review Alexander Ivlev

New York City hypnotist Alexander Ivlev starts his show from explanation of hypnotism:
"Hypnosis a natural state of the human mind. We experience hypnotic trance every day when we read the books or watch the movies. Hypnotism has been approved by American Medical Association in 1955 as a healing modality. Nobody can be hypnotized against his or her will. You won't lose your consciousness under hypnosis".

Then Alexander asks if the audience want to experience hypnotic relaxation. After a short period of time the audience is comfortably sleeping. In 5-10 minutes everyone will open his/her eyes and will be refreshed like after a good nap . After this everyone is welcomed on the stage to participate in hypnotic experiments. Alexander starts working with volunteers on a stage and does suggestibility tests. Soon the best subjects will be hypnotized and the show will begin.

The show set may consist of "hot seats/cold seats", "age regression", " famous people", "dancing with the stars", "virtuoso musicians", "unknown language translation", "legs glued to the floor", " human bridge", and many other things. Alexander always improvises.
But don't expect somebody on stage barking like a dog or clucking like a chicken because it's not funny at all.
Also if anyone smokes cigarettes and wants to quit smoking, he or she will get a chance to be hypnotized during the show. They can quit smoking easily.

After the show everyone will be refreshed and full of new energy! Everyone will have a good time!

New York City hypnotist Alexander Ivlev is a certified hypnotist and a proud member of The National Guild Of Hypnotists. Alexander was born in Russia in 1962. He came to NYC in 1991. Of course he speaks English with accent. His comedy hypnosis shows are clean and mostly about the benefits of hypnosis; everyone feels great after his show. If you want to compare Alexander Ivlev to other hypnotists think of Kreskin meets Tom Silver. Alexander's hypnosis show is fascinating and funny.