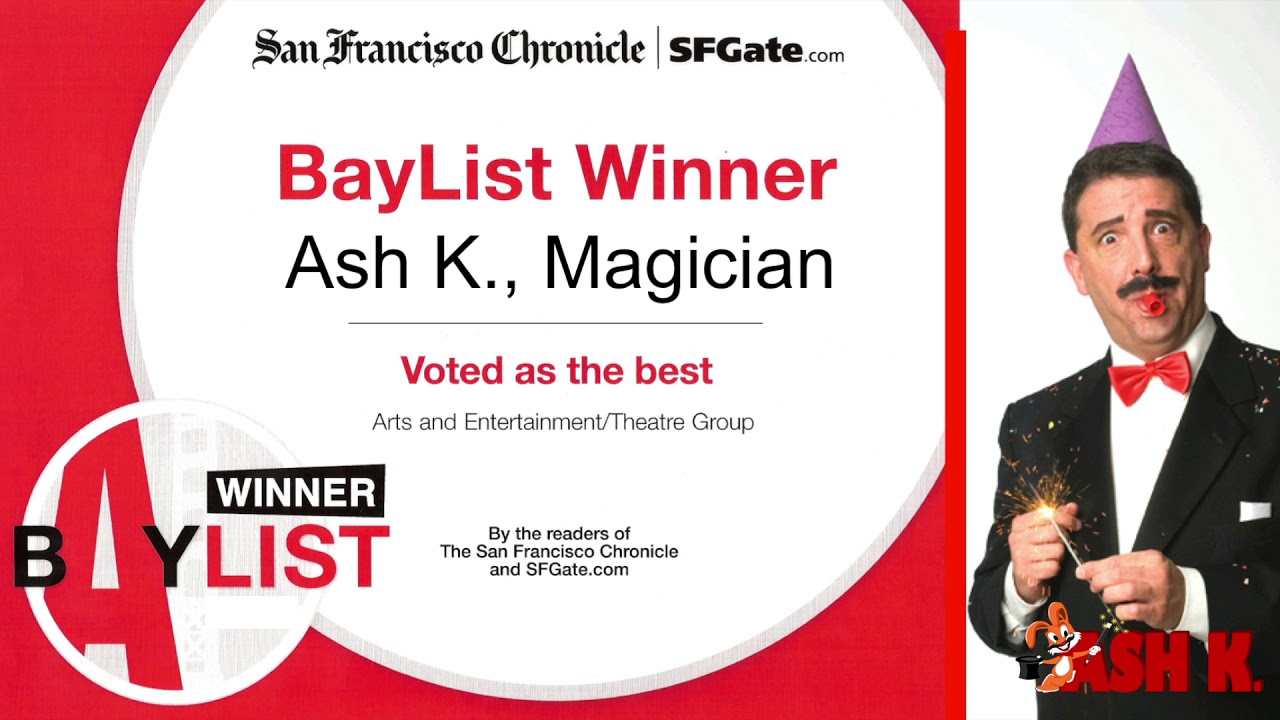 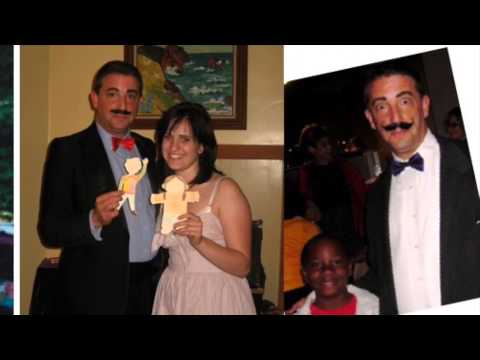 Ash K. - When You're Looking for Kids Magic!

Hire a Joker who is actually funny.

Sparklers Not Included: Lots of Magic However Is!

No bunnies were harmed in the making of this photograph. 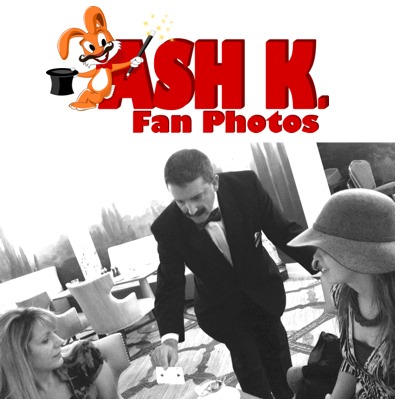 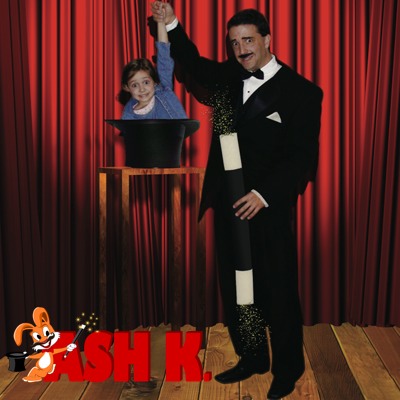 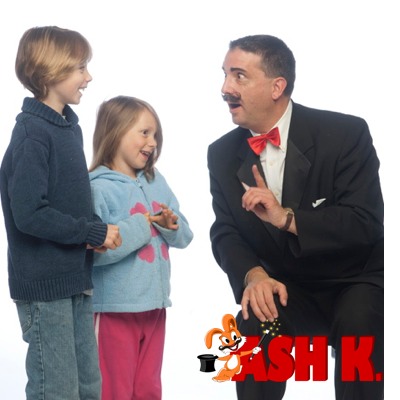 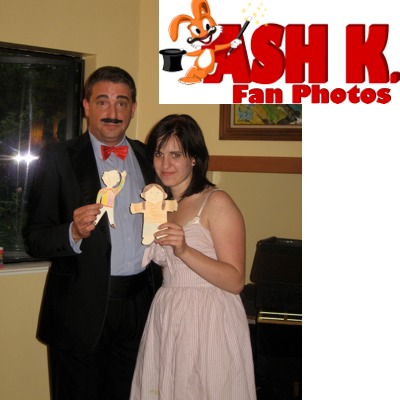 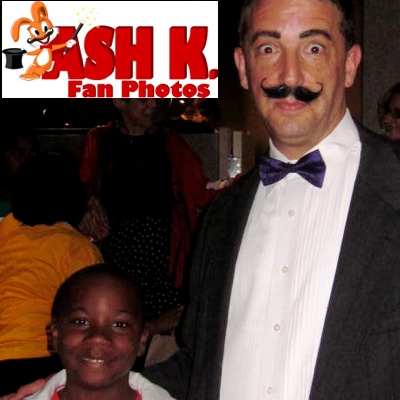 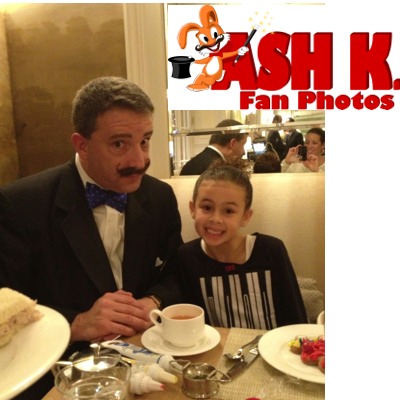 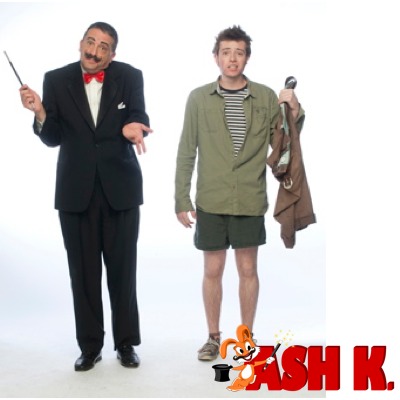 Most of the you who visit this profile are parents, people who work with kids, & employees going insane with the stress of this pandemic.

We will be offering a severe discount, so that Ash K. can continue to entertain, but using video conferencing.

Be safe, kind, & informed as we all brave this storm.

Please visit our website for videos & testimonials from excited fans, then book HERE, on GigSalad!

Ash K is brilliant. I was mesmerized by his wit, humor and magic. He understands and captivates his audience verbally and magically. He's a great entertainer for young and old....love his manager, Kevin.

Ash K. was fantastic. He was witty, kind and fun for all ages! He made us all laugh and we enjoyed every minute. I would definitely hire him again!

Great entertainment for all ages

Ash K. was hilarious and his performance was engaging. Everyone loved it! I'd love to have him back for a future event. Highly recommend.

The service made my party complete and special.

Professional. Engaging. Looks the role. Sounds exotic. Very friendly. Took adequate time to prepare. Best of all kids all ages, as well as all adults were drawn in.

The service made my party complete and special. It provided the focal highlight of what otherwise would have been an average party.

Thank you for the kind words, and taking the time to write a review!

I was at Lefty O'douls with two friends on Oct. 31st. We had a great encounter with Ashkanazi the Pretty Good. His initially approach was very comfortable (three women in a strange town etc.) and he had us in stitches in no time! His magic was great but what made it special was how he was able to read us. It made his jokes at our expense hilarious. He may have to upgrade his name...

I have had the pleasure of viewing several of Ash's performances. He commands the attention of young and old alike. Not only does his magic mesmerize and delight the youngsters, but he elicits, "How did he do that?" murmurs from adults as well. But what Ash K. does the best, all while performing eye-popping magic, is nearly instantaneously read his audience to deliver spontaneous, cutting (but with kindness) jokes, teasing just enough so that everyone can enjoy laughing at Ash and themselves. He does this with mixed audiences as well as with all-children, or all-adult audiences, where his humor becomes appropriately more racy (and funny!)

Ash K. did a great job entertaining our customers at a recent dinner. He was able to read the atmosphere of the group quickly and adapted his performance while also personalizing his magic to amaze us. Everyone really enjoyed him and talked about the event for weeks.

Just when I thought that all the good service had gone out of the world, I meet Ash K. The Pretty Good and his manager Kevin Madden. I needed entertainment for an event we where having at the restaurant where I work so I went to the Gig Salad site to have a look around. I inquired to 4 or 5 different acts, but Ash K’s manager (Kevin) was the first to get back to me and after speaking with him I knew my search was over. Kevin was absolutely wonderful on the phone. He was very professional, answered all my questions, and quoted me a reasonable rate. I felt very confident that he could deliver a good time. And boy did he! Ash K was a pleasure; talented, funny, superbly charming and magically entertaining. Both adults and children gasped and gaped at his magic tricks, while giggling at his silliness. An extremely pleasurable experience all around. Thank you Ash K and Kevin for such an amazingly fun show.

So many magicians .... but there's only one Ash K.

AND we guarantee our pricing: give us a written quote from any full-time professional, and we'll match it.

Northern California's Funniest Magician, Ash K. (aka Ashkenazi the Pretty Good), hales from Balka (a very small country East of Poland), and has lived in the San Francisco Bay area for some fourteen years.

Born to a family of professional entertainers in the Eastern European country of Balka, Ash K. began performing for paying audiences by age thirteen, and by age fourteen, allowed them to leave the room for additional payment.

Recently asked about his experience in America as a foreign national, Ash K. responded, “I like it here very much. For one, I have not been incarcerated, even briefly, which is a lot better than some folks are doing both home and here. AND not a single person has had another unfortunate moment with that guillotine illusion this year. Then again, I did take it out of the show last year.”

He enjoys reading about European and Asian history, crochet (traditionally, a man’s hobby in his country), and jogging.

For corporate entertainment, please visit our other website, WhoAteTheRabbit.com

If you've done this before, you have a partner who knows how to make your living room work for the kids party, or a huge convention room feel intimate. If you're a novice, we'll take care of you and your guests – the goal is always the best show possible!

If Charlie Chaplin, Mel Brooks, Groucho Marx, and Borat had a kid (which is we know biologically improbable), and the kid did magic ... you'd get Ash K.

Sound, stage, and lighting TBD for groups larger than 50.