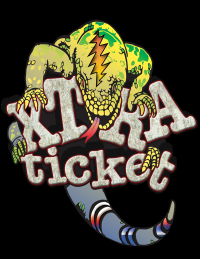 Be the first to review Xtra Ticket

Xtra Ticket is an Arizona home-grown Grateful Dead tribute act that has been performing in the Southwest since 1994. Each show is like a road trip. From the on and off-ramps of song segues to the superhighways of exploratory jams, this band pushes themselves to the limits, driving their fans on a musical journey to an ultimately grateful destination. Xtra Ticket has the proficiency to re-create the sonic bliss of three decades of Grateful Dead and Jerry Garcia Band material, while maintaining their own stamp on the jam. This secret formula is commonly referred to as "going Ticket style" and appeals to a wide audience of young and old, satisfying the purest of Dead Heads plus music lovers of all genres. Like the good 'ole days of Dead Tour, the true blotter test is that you can leave your worries at the door and not only be a spectator, but a living, breathing part of show.

Xtra Ticket is a six piece band where each member has their own role, including a "Jerry", a "Bobby", a "Brent" and a rhythm section modeled after that of the Dead. This concept has been implemented by other Dead bands, and proves a most effective way to achieve the Dead's live sound. Along with the faithful re-creation of the music, another piece of the puzzle is the gear. This attention to detail leads to heartfelt renditions and unique jams every time. This is the level of unlimited devotion Ticket brings to the table, elevating the music and magic to make each show an unforgettable experience.

It is our belief that we share a kindred spirit with the dozens of Grateful Dead tribute bands across the globe who do this for a living or simply just for fun. We are all indebted to the Grateful Dead for providing us with a unique body of music which celebrates life in all its beauty. Ultimately, it is about the Dead Heads themselves. Xtra Ticket's loyal fan base crosses over to some of the greatest friends we could ever ask for. Xtra Ticket feels fortunate to have shared the stage with such national touring artists as Vince Welnick, Tom Constanten, David Nelson, Merl Saunders,Barry Sless, David Gans, Bill Nershi, Jerry Lawson, Keith Secola, Jen Durkin, Papa Mali, Ben Combe and many others.