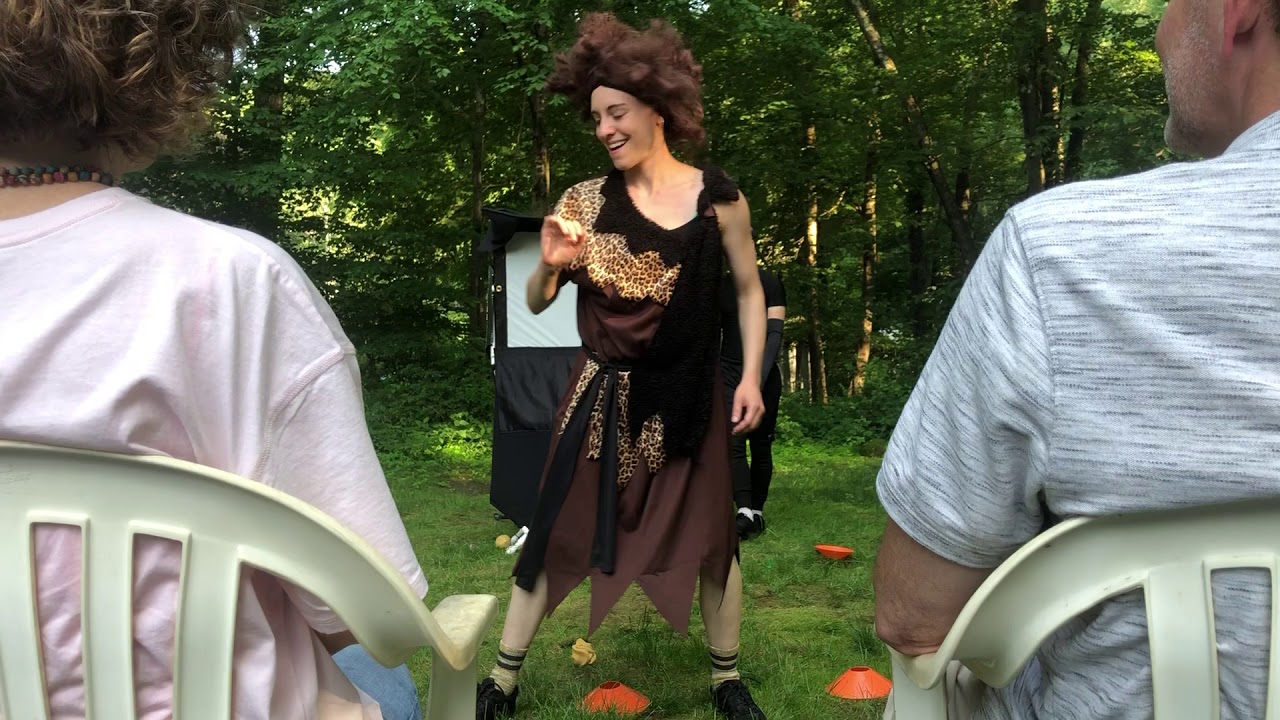 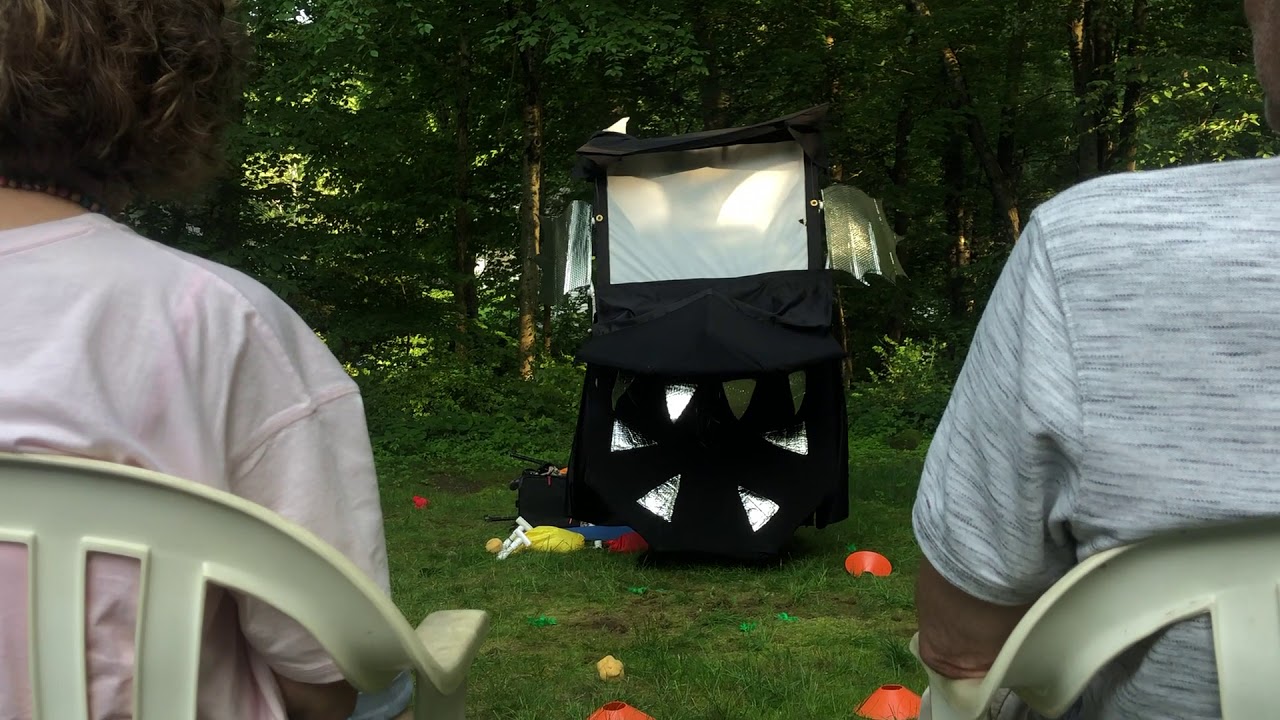 The Stage Becomes a Dragon 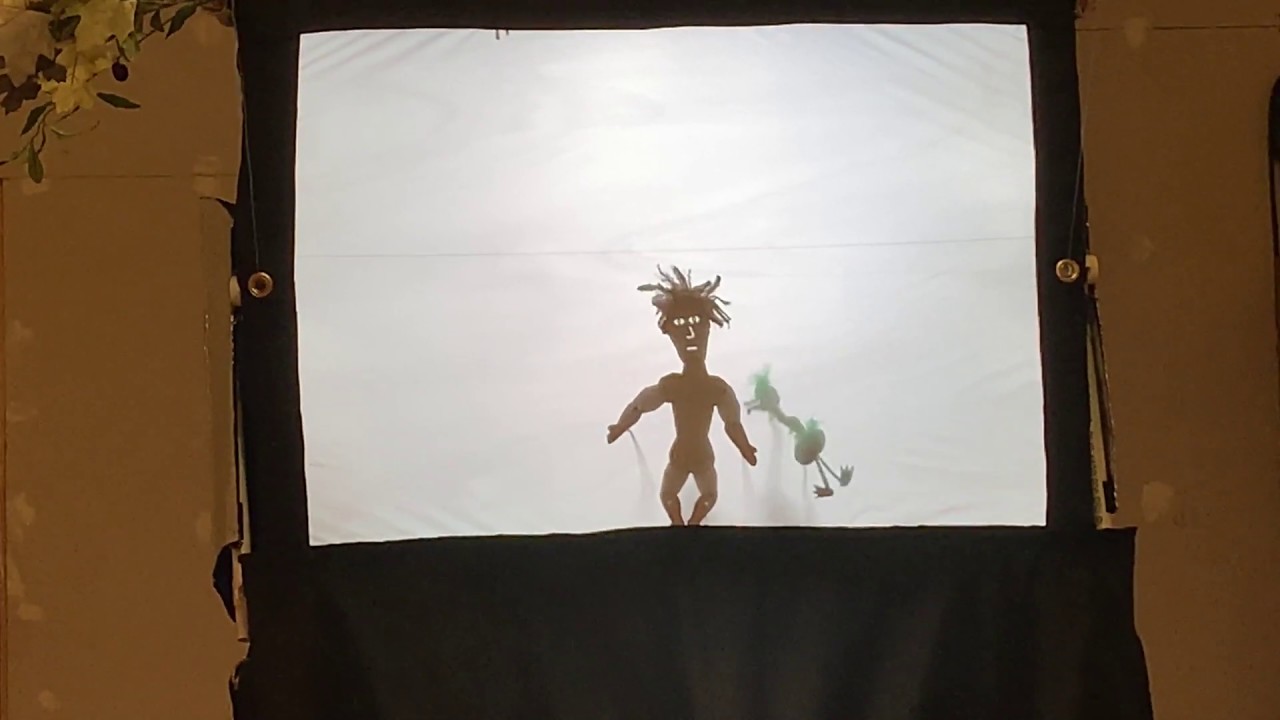 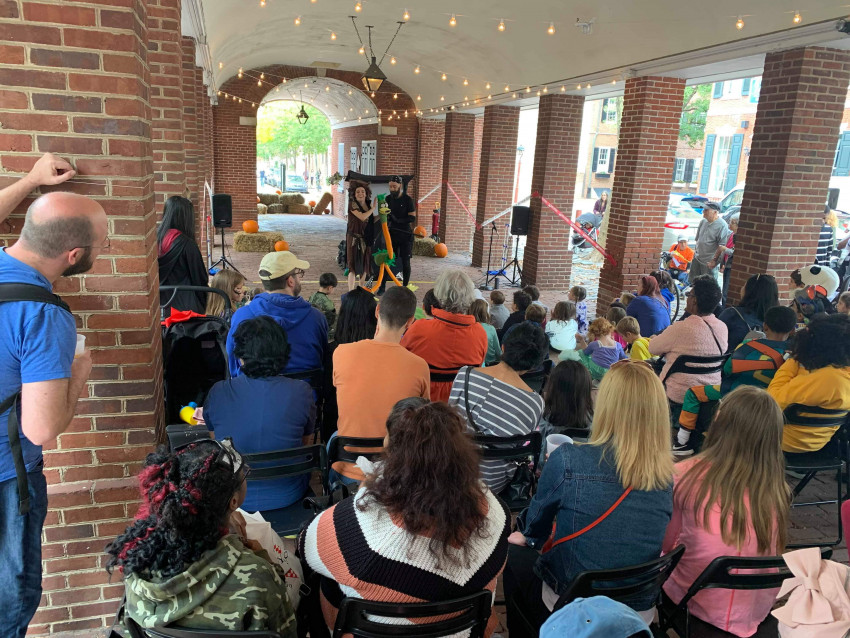 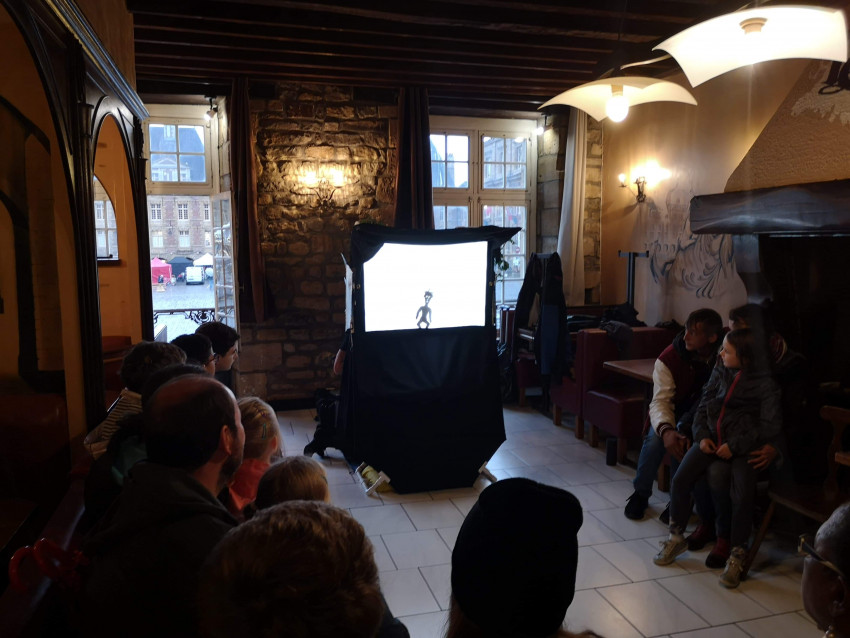 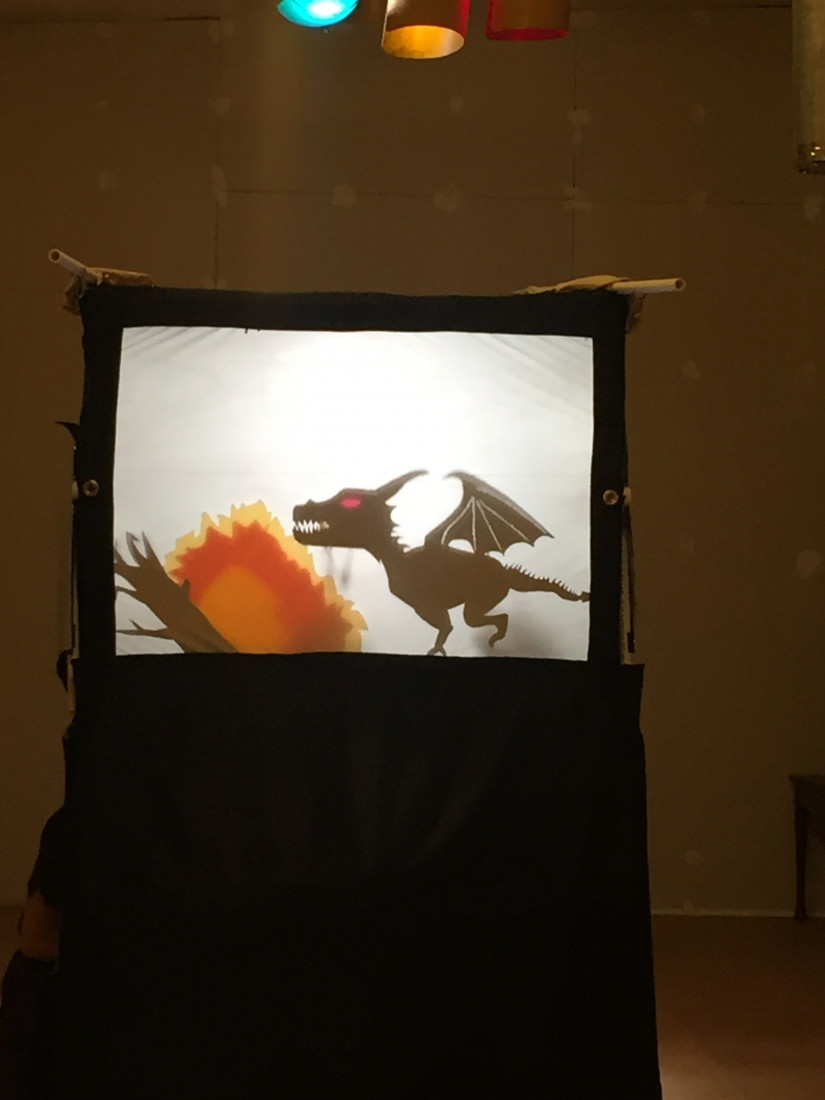 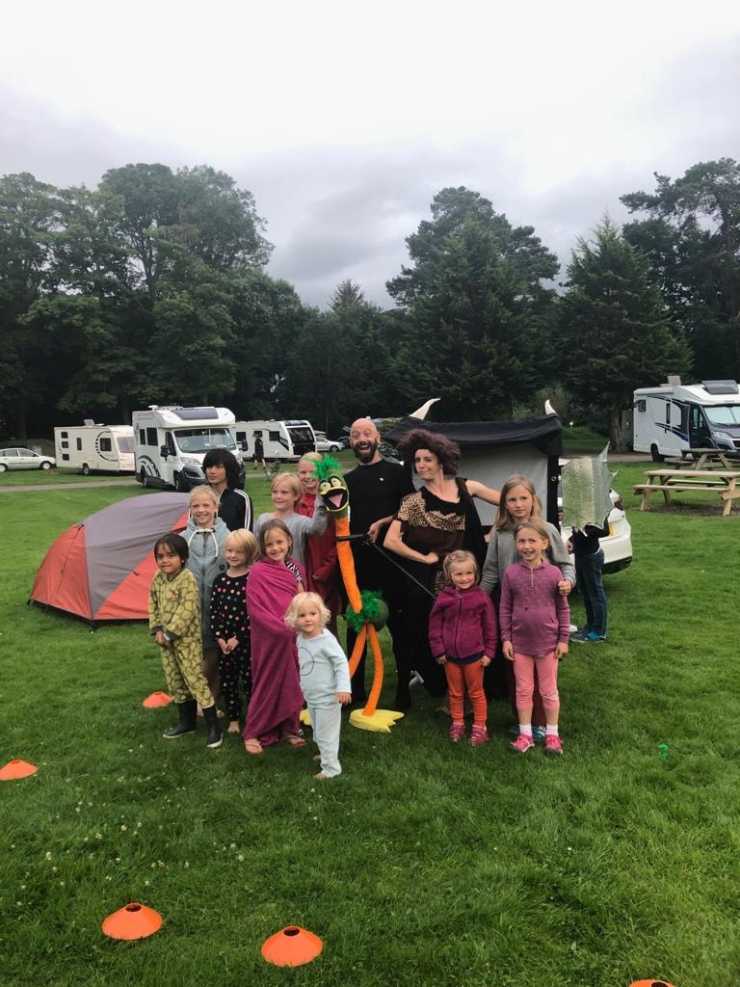 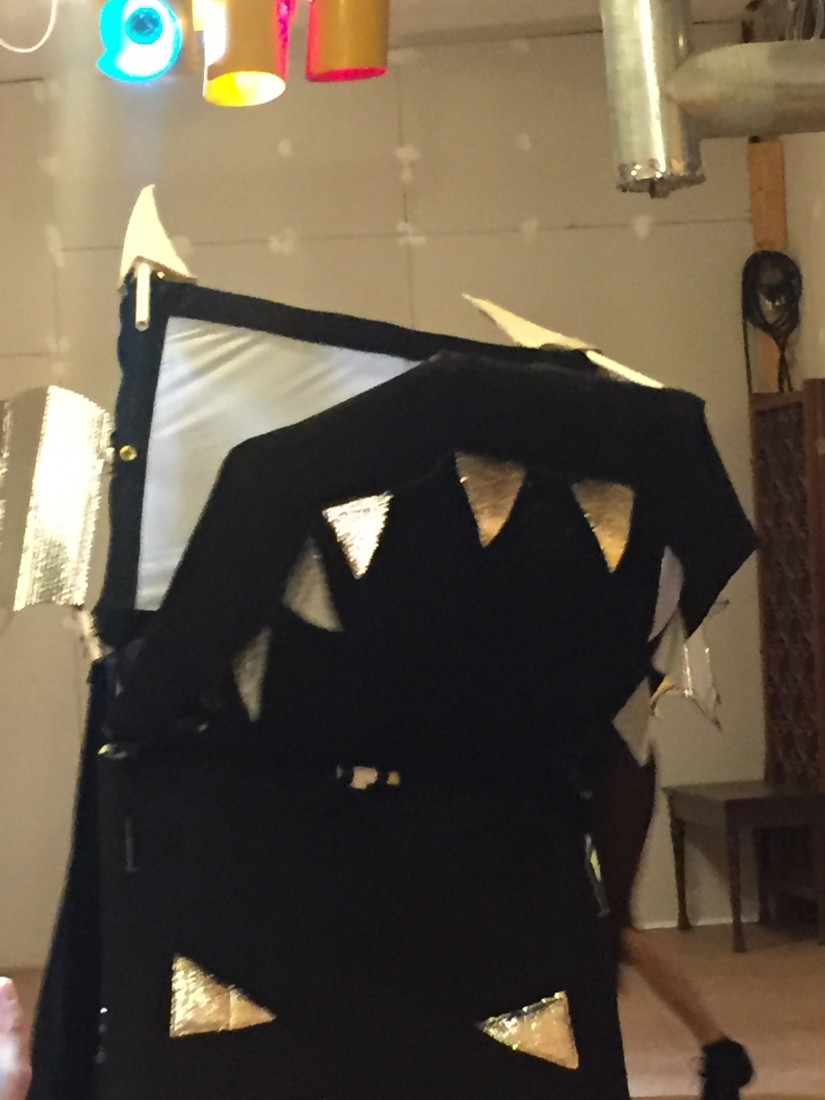 The Dragon and the Wanderer is an original, half hour puppet and physical theatre show for ages 5 and up. It utilizes shadow puppets, hand puppets, live actors, and original music to tell a story of courage and friendship. The show is built to play outdoors, indoors, or in the classroom. During our hero's final battle with the dragon, the stage transforms into a giant dragon!
Along with performances, we offer puppet-building workshops. Participants build their own shadow puppets and learn to use them. These workshops can be specifically tailored to any age range, and can last from 1/2 hr to 2 hrs based on your time frame. We provide the materials–all you need is your creative spirit.

Be the first to review Wandering Theatre

The Dragon and the Wanderer is a family-friendly show that uses puppets, shadow, movement and music to tell the story of Grog the Neanderthal. Alone in a barren desert and searching desperately for food, Grog discovers an oasis where vegetation is lush and food plentiful. But this almost-paradise is the hunting ground of a menacing dragon, who takes pleasure in tormenting smaller creatures. Using courage and friendship (and telekinesis!), Grog and his new friend Little Bigfoot must outsmart the bully by facing the dragon in battle.
*PLEASE NOTE: During Grog's battle with the dragon, our stage transforms into a life size dragon puppet! This material might be scary for audience members under the age of 4.

The Dragon and the Wanderer is an original 2-person, half hour puppet and physical theatre show for ages 4 and up. It utilizes shadow puppets, hand puppets, life-size puppets, and live actors. With a small, self-contained stage, the show is built to play outdoors, indoors, or in the classroom. We travel with our own battery-powered speakers and lights, and have minimal technical requirements. Set to original music composed by cellist Rachel Icenogle, “The Dragon and the Wanderer” does not use language, and so needs no translation. Friendship and bravery are universal!

Along with performances, we offer a 15 minute talkback, during which time we answer questions from the audience and give an inside glimpse into how our puppets work.

We also offer puppet-building and manipulation workshops. Participants will build their own shadow puppets, and learn to manipulate them to tell their own stories. These workshops can be specifically tailored to any age range, and can last from 1/2 hr to 2 hrs based on your time frame. We provide the materials–all you need is your creative spirit!

The Dragon and the Wanderer is the first endeavor of Wandering Theatre, the husband-and-wife-duo of Aaron Roberge and Leah Holleran. Married in July 2018, the European tour of this production in the summer of 2019 doubled as their honeymoon. Aaron and Leah hail from the East Coast of the USA, where they have been performing and teaching professionally for nearly a decade. They are thrilled to present this wholly original production–hopefully the first of many they will build together.

Leah Holleran (Co-Creator; Performer) has worked professionally in the arts for over ten years, and is thrilled to embark on this new adventure of creating an original piece from scratch with her incredible partner. Onstage, she has performed Off-Broadway, regionally, and locally in musicals, plays, and dance pieces. She toured the country with Enchantment Theatre Company’s productions, which were her first foray into puppetry. She fell in love with it; she toured nationally for three years and company managed her third tour. She has also acted on film. In addition to performance and management, Leah choreographs and teaches dance, facilitates corporate training workshops using improvisation and acting, writes novels and short stories (mostly in the sci-fi and fantasy genres), and studies and trains circus aerials (trapeze, rope, and silks). Check out the Blog page to read some of her writing and follow the adventure!

Aaron Roberge (Co-Creator; Performer) is an actor and puppeteer based out of Philadelphia. A graduate of the Bloomsburg University Theatre Department, Aaron lives and works with his recent wife Leah Holleran. He has most recently been seen in Artemesia as Oracio Gentileschi at South Camden Theatre Company, and A Christmas Carol as Jacob Marley (and various) at Walnut Street Theatre. He looks forward to his belated honeymoon backpacking around Europe this summer as well as touring The Dragon and The Wanderer.

The Dragon and the Wanderer is the very first endeavor of Wandering Theatre! The show was built, workshopped, and previewed in Philadelphia, PA, USA. It made the journey to Europe in the summer of 2019, with pop-up street performances and as an official part of OFF Street in the Festival Mondial des Théâtres de Marionnettes (World Puppet Theatre Festival) 2019.

We require at least 10 square feet of level playing space. This can be outdoors (weather permitting) or indoors. The Dragon and the Wanderer cannot be performed in spaces with ceilings shorter than 8ft. We have no special requirements for lighting or sound. We travel with 2 portable bluetooth speakers, and our music plays from a single track.

For our puppet building workshop, we will need tables and chairs for the participants, but we provide all other materials. For a workshop catering to more than 20 children, we would request that at least one additional adult be available to help supervise.

We provide all necessary equipment. We need 1 hour in the performance space before our scheduled show time to set up the stage and puppets.

For puppet building workshops, we need enough tables and chairs for the participants 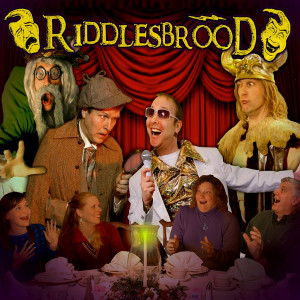 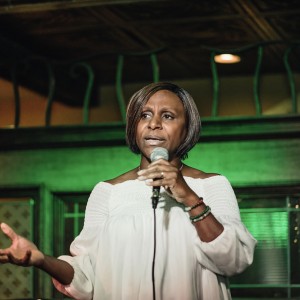 Jennifer L. said “Santa and mrs. Claus made our Christmas Eve so much fun. Santa knew what each child liked and…”

Barbara S. said “Ben was a surprise for the bride and groom at my nephew’s rehearsal dinner, and he couldn’t…”