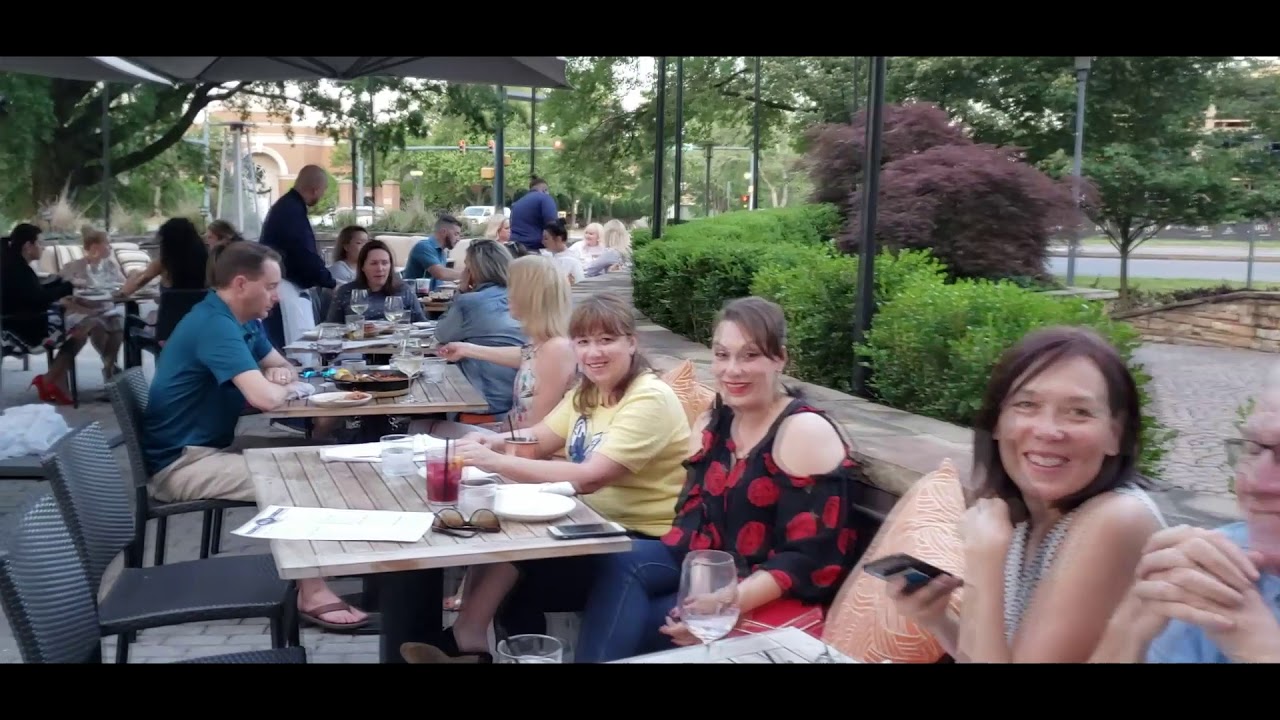 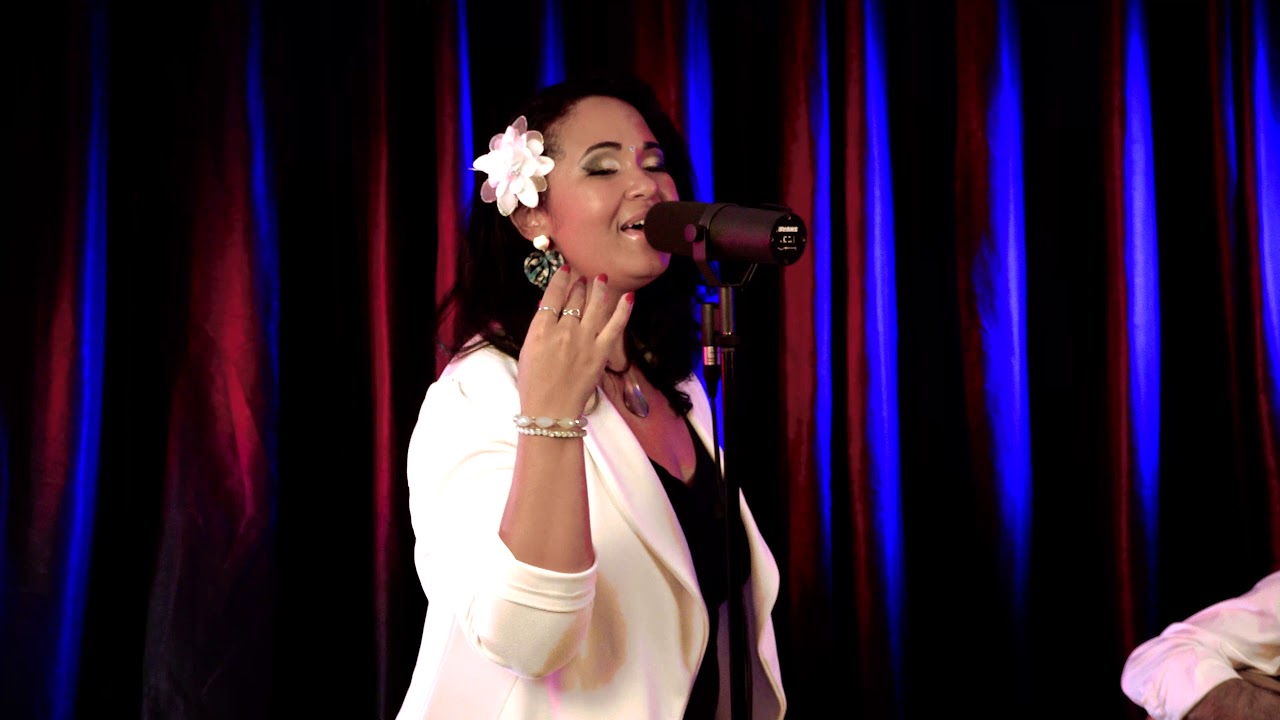 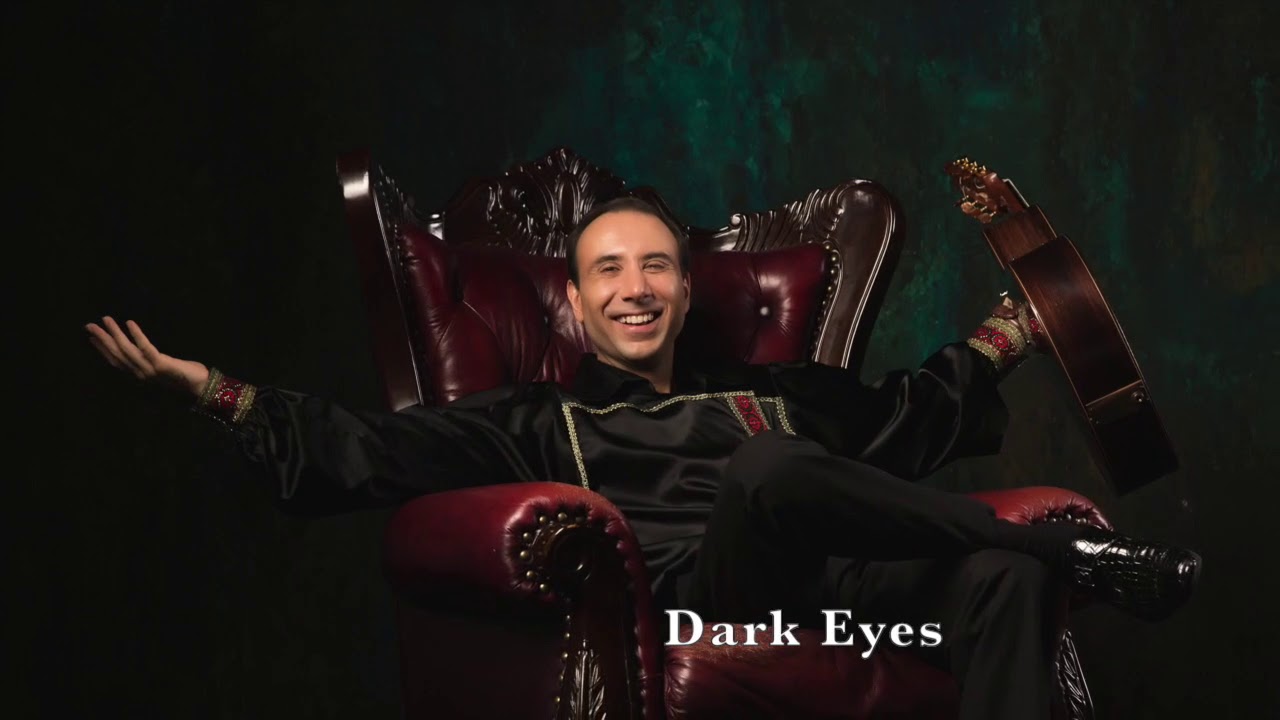 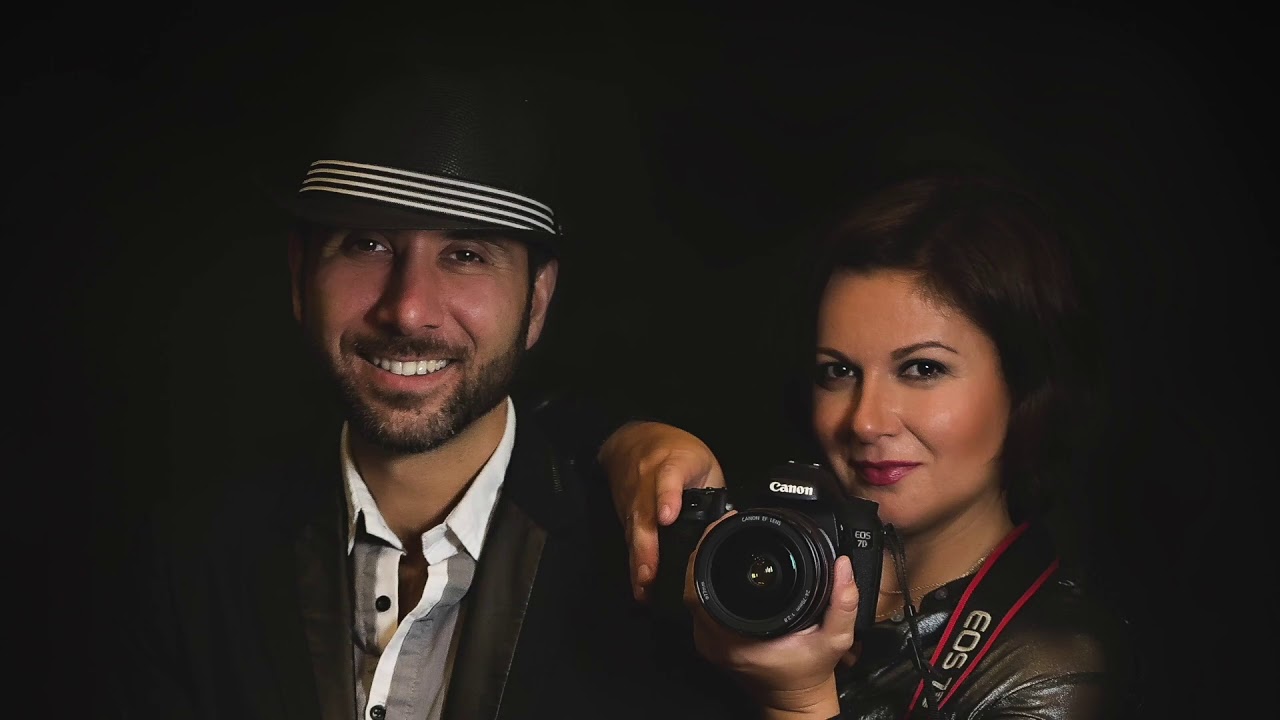 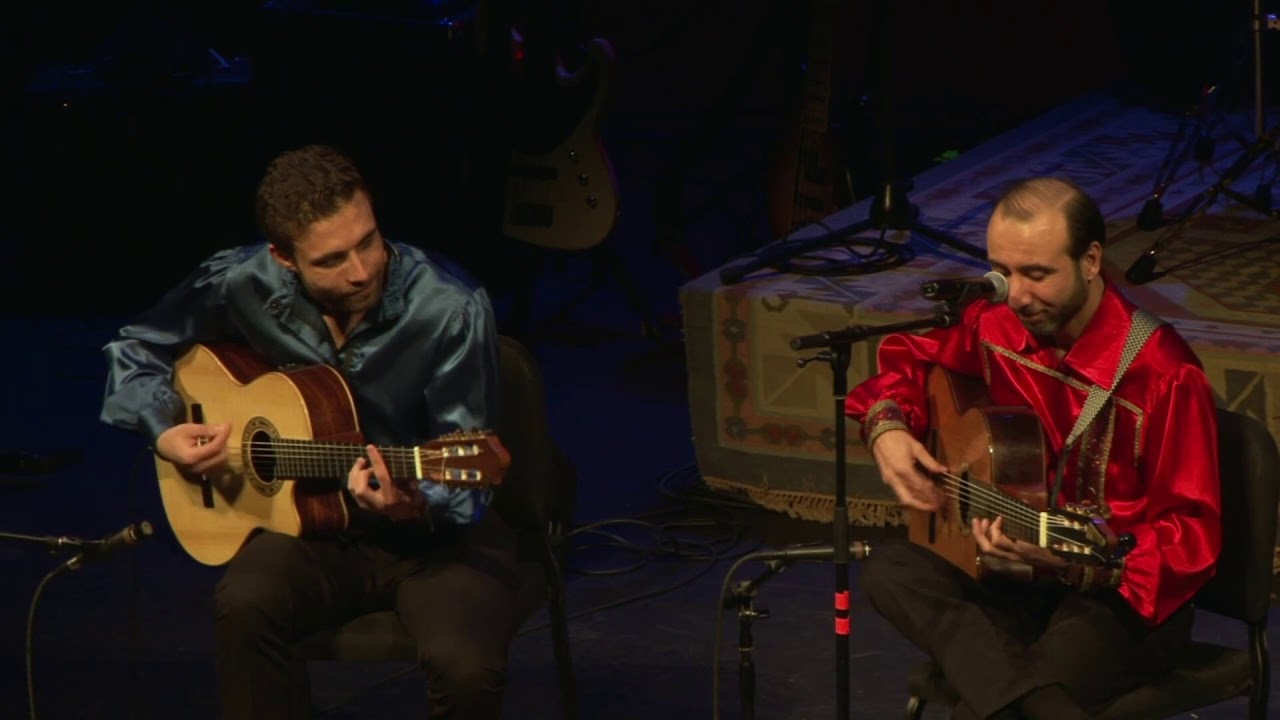 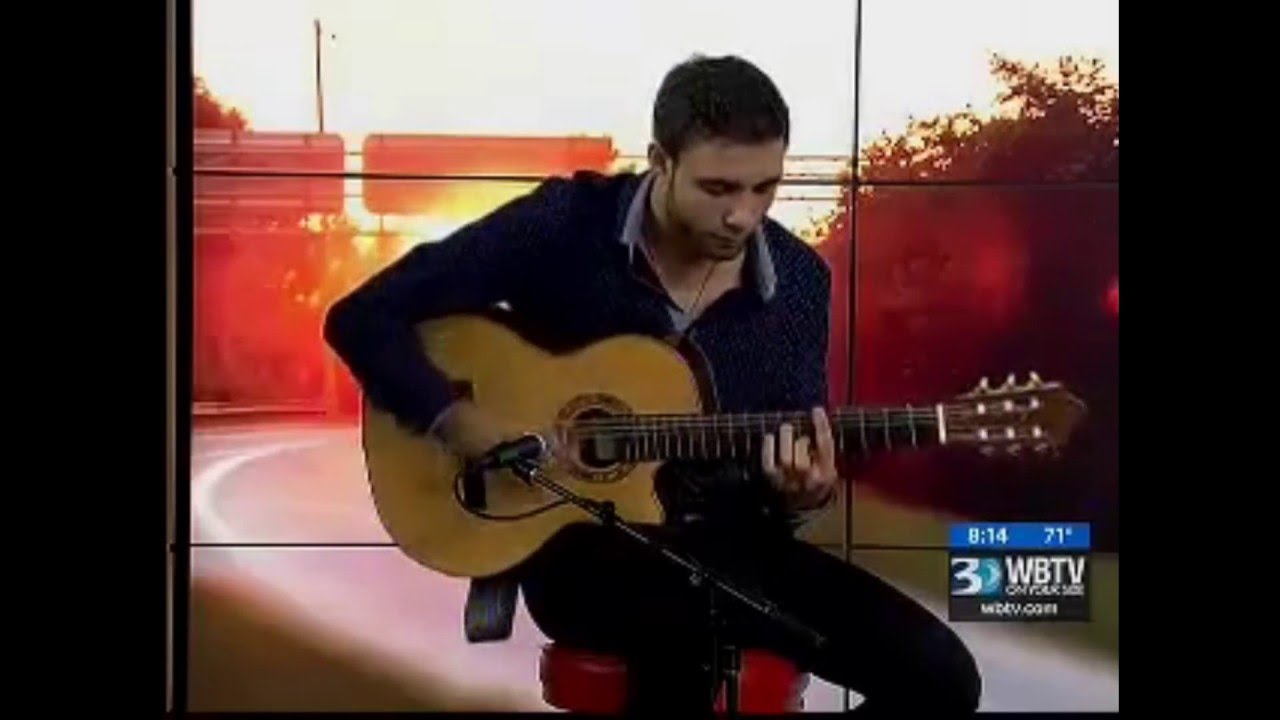 Dark Eyes - VS Guitar Duo at the TV station 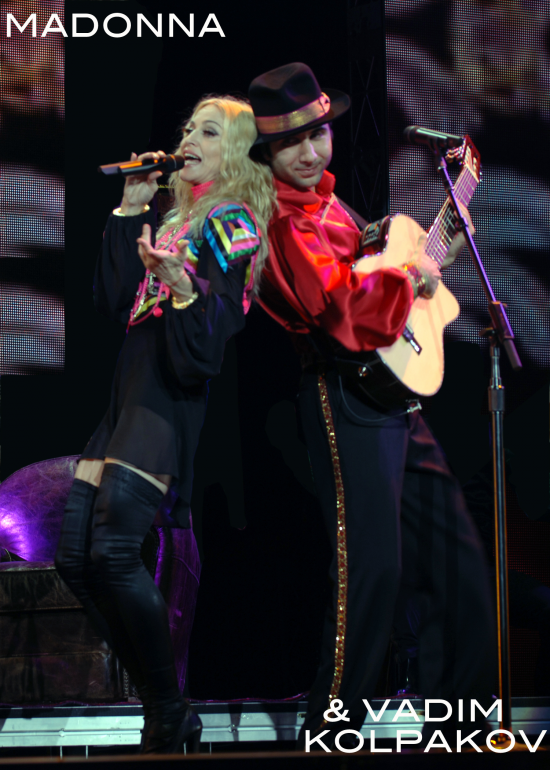 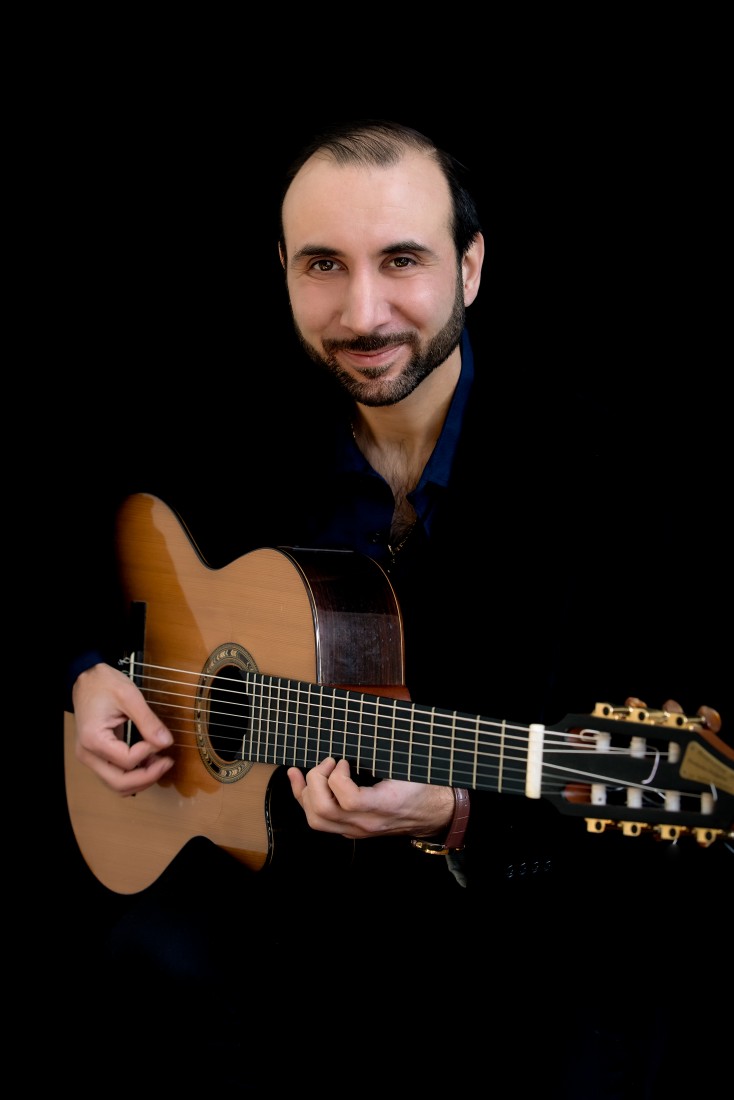 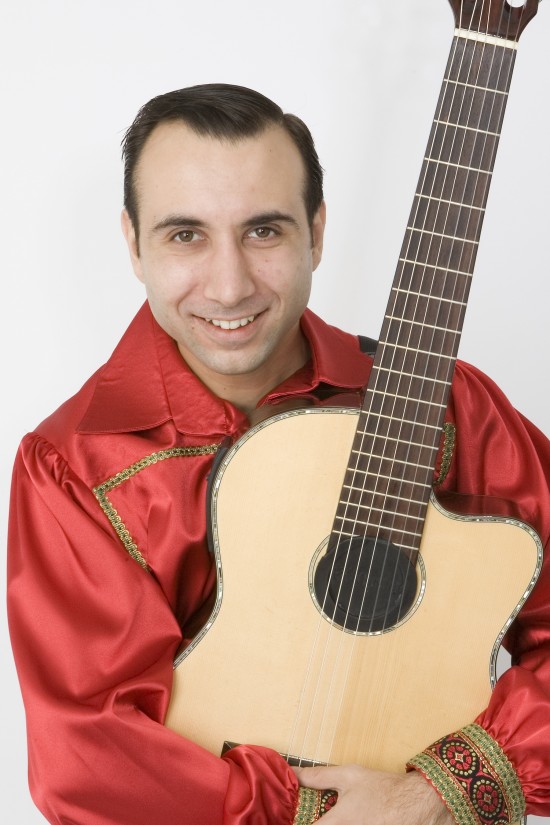 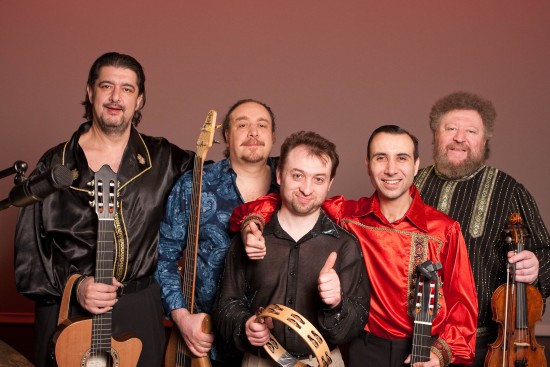 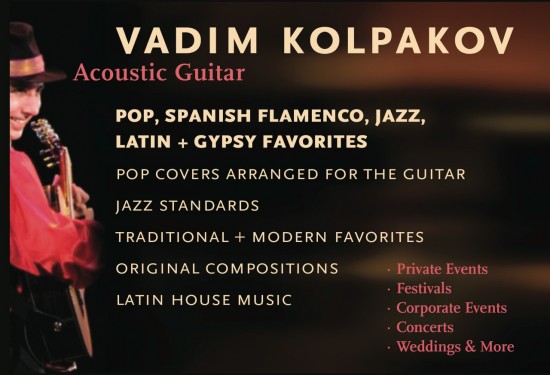 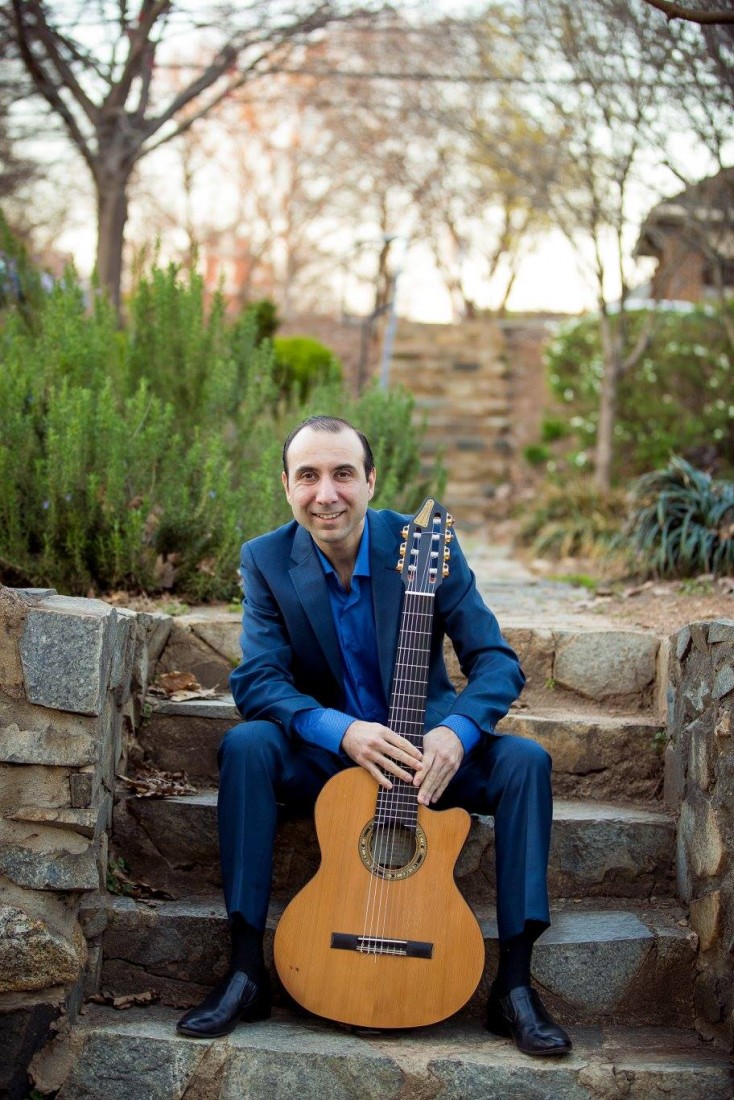 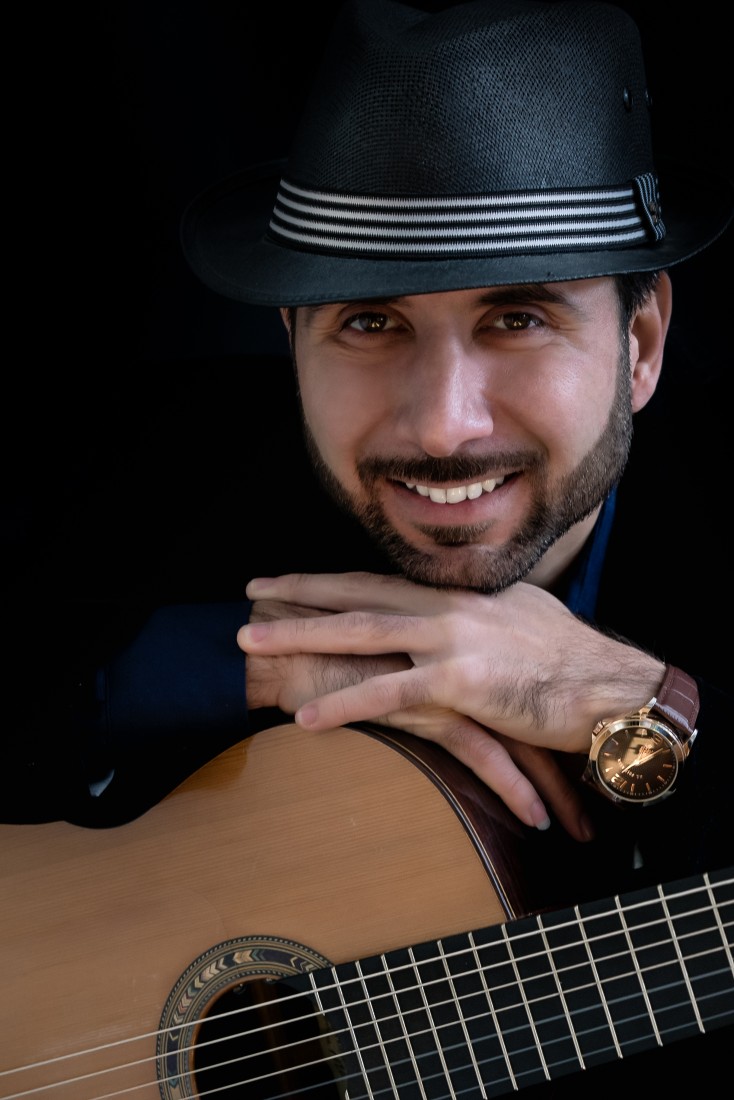 Vadim Kolpakov is the virtuoso acoustic, classical guitarist. He performs Spanish-Flamenco, American Pop, Jazz, and other World music. He provides romantic and energetic virtuoso guitar performance at any occasions. His World Fusion is similar to the legendary performers such as Gipsy Kings, Django Rainhardt, Paco de Lucia, and Al di Meola. Popular hits/covers arranged for a guitar in Vadim's repertoire. Additional musicians: Percussionist, violinist, accordionist and others are available upon request, as well as Russian, Flamenco and Gypsy dancers. Solo by Vadim or Duo, Trio and full ensemble can delight your special event with Vadim's and his band entertainment. Check more on profile here.

Vadim was totally awesome! He helped make our event elegant and special. We would highly recommend him for any event! Very Professional!

It was a pleasure meeting you and booking you for our Thanksgiving event . To everyone reading this, there is a fine line between amateur/casual performers and professional musicians. Vadim is truly a professional . Everyone was amazed by his talent, and his song selection had something for everyone. Well worth the $$ . We will use again .

Thank you John, it was a pleasure, and I'm looking forward to see you sometimes again! Wishing you and your family Happy Holidays and all the best!

I hired Vadim to play for a very small corporate event at Langtree Plantation. He was on time, professional, and played wonderful background music for our dinner.
I would hire him again!

Vadim is an amazing guitarist, singer and dancer! His performances differ in the variety of genres and types of art. I highly recommend him for any size events.

Thank you very much, Giulia! It was a pleasure to play at your event! Best wishes ;)

Very professional, and great sound to his music. Our hotel guests love him and his music! would definitely recommend to others.

I have seen Vadim in several venues: from a benefit concert playing classical, flamenco and gypsy tunes to sitting in with the band Gogol Bordello when they played Charlotte. I have also seen videos from when he toured with Madonna. An amazing talent. I highly recommend him.

Introducing Vadim Kolpakov & Co. - a local gem with a unique sound that wins the hearts of everyone – young and old. Vadim's music is romantic, beautiful, lyrical, passionate, fascinating and always captivating. It will make your event very special and unforgettable!
His art rooted in Gypsy style music and enriched by Pop, Jazz and Flamenco cultures, enchant audiences with intricate improvisations, spell binding rhythms, and beautiful melodies.
----------------------
Vadim plays on a acoustic unique 7-string guitar, sings and dances Gypsy style similar to flamenco and tap dancing. He performs solo or with the flamenco female dancer and other virtuoso musicians and dancers (available upon request).
Vadim's virtuosity has impressed the pop icon Madonna so much that she invited him to join her on the 2008-2009 Sticky and Sweet world tour.

Vadim can perform as soloists as well as with the Duo, Trio - including extraordinary musicians, or the full band.

"Such a beautiful music performance was done by Vadim! ... His music is something" – Bob K.

"I love Vadim's music, I listen to his CD in a car every day!” – Inna Wilson

Vadim is a virtuoso Russian-Romani (Gypsy) seven-string guitarist, dancer and vocalist. A graduate of the Romani performing arts school Gilori, he studied guitar with his uncle and mentor Alexander Kolpakov in Moscow. At the age of 15, Vadim joined the Moscow Romen Theater as a guitarist, vocalist, dancer and dramatic actor. Since then, Vadim has performed extensively in Russia and abroad; he has given concerts in Carnegie Hall (New York City) as well as in the Kremlin (Moscow). He has participated in numerous musical projects on Russian, European, Canadian, and American television and radio. He was an artist-in-residence at the University of North Carolina at Charlotte in 2006-2007. In 2008-2009, Vadim went on tour with Madonna as a performer in her Sticky and Sweet World tour. In addition to being the founder of the US based touring and recording Via Romen ensemble, Vadim performs as a special guest with various U.S. and Russian artists and bands. His musical repertoire includes Russian and Romani (Gypsy)-style compositions, 19th-century Russian seven-string guitar repertoire, Spanish flamenco, Pop covers, jazz and his own compositions and variations on classical, rap and world music.

Vadim & Co. would be happy to discuss your ideas and help plan your special performance needs.

Depends of the event and the location, we either provide our own sound system or require from the client. Contact us for more details.

Famous covers and originals of Spanish/Latin/Flamenco/Pop/Gypsy/Jazz and world music styles.

If we require stage setup needs, we provide our technical rider. For this information, please contact us.