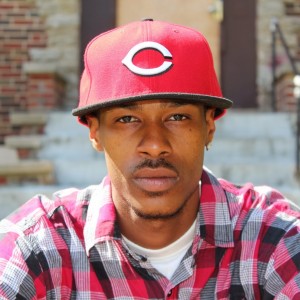 Be the first to review T.r.a.y.

Travell Adams (born 12/10/1985) better known by his stage name T.R.A.Y. which stands for Travell Rhymes And You, is an american musician, writer, and artist.

In 2009 his single "Dear Dr. King" a tribute to the last civil rights leader, racked in over 70,000 downloads after being released online. The song earned the artist a huge online fan base. By the end of the year T.R.A.Y. went on to record several online hits like "Eveyrday is Valentines" and "My Favorite Song". All were later released on his debut mixtape "T.R.A.Y. - So Midwest Hollywood" which went on to become a classic amongst fans.

Following the success of So Midwest Hollywood, T.R.A.Y. partnered with a independent label from his hometown called Prospect Entertainment to release what is now known as the "T.R.A.Y. - Home 4 the 1st Time mixtape. The collection was promoted on a small regional tour, and despite major critical acclaim the release managed to bring in 20,000 downloads with songs like "Had Enough", "Self", and "2Gether". After Home 4 the 1st Time, T.R.A.Y. recorded several features, and freestyles which further established his lyrical prowess among fellow top MCs.

The year 2013 marked a pivitol point in the artist's music and creative career in which T.R.A.Y. released 3 whole mixtapes back to back, "T.R.A.Y. - Book of Psalms" was his first all experimental album as it shocased the beginning of a new style of song writing. The release however went under the radar as many fans believed the artist may have reached his creative peak, and fell off to some extint. In response Travell took to the internet to release "T.R.A.Y. - Blue Ivy" a collection of freestyles recorded over instrumentals of the most popular hip hop songs at the time. As an added bonus, bare vocals were left at the end of most tracks to be used by DJ's and studio engineers for promotional purposes.

Toward the end of year, one of T.R.A.Y.'s most popular releases debuted in the form of a self titled mixtape, "Travell Rhymes And You" The LP was originally slated to be released as the trilogy, and final installment to his HitList Collection. Many songs on the album have went on to become all time favorites such as "Fuck You", "End Up Paid", "I'm Grown Now", and "Just My Type".

To date, T.R.A.Y. has independently released a total of 9 music collections, several singles and music videos. In the summer of 2014, the artist confirmed that he was working on his 10th collection which is still untitled and set to be published by P.A.C.E.World Media Group.

I can bring my own DJ. Client must have stage, music/speaker system etc... Need atleast 2 microphones. Contact for details

Client may customize set music list and request certain songs from artist's catalog of over 200 songs. Contact for details...