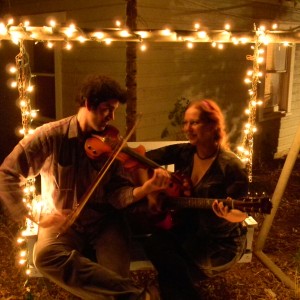 The Uncanny Violet Unicorn is a dynamic duo with Matthew on violin and keyboards, Elecktra on guitar and vocals. Playing moody artrock originals and a blend of blues, indie, and alternative covers. Occasionally even some classical works its way into our sets. Music geeks at heart Tuvu would love to play for you!

Be the first to review The Uncanny Violet Unicorn

For a concert/party/bar we can play a set at about 2-3 hours.

For an art gallery or store we do a cycling set based on the flow of traffic and we try to not play the same song twice for any returning audience members.

Elecktra and Matthew have known one another since grade school, where they spent a lot of time smoking cigarettes together during breaks. They both were in orchestra and had a focus on violin. Reuniting several years later they discovered that they loved playing music together. Matthew's more classical style helps balance Elecktra's more eclectic approach. Together they play the music that they want to hear and they hope that you'll enjoy it as much as they do.

We have the equipment and gear to play just about anywhere that there is electricity. When electricity is not an option we can play fully acoustic but also have a small battery powered amp just in case.

Around 20 originals that play out to about 1 1/2 hours. We have an odd but extensive list of covers including some: Fiona Apple, Throwing Muses, Kristin Hersh, Men at Work, Leadbelly, Hole,Tori Amos, Kate Bush, we even have a Journey "Don't Stop Believing" medley besides our love for 1880's to 1930's classical and blues/ americana. We do custom cover sets for private parties. We always enjoy adding new songs to our repertoire.

It would be easier, but not by much, to say who hasn't influenced us in some way.