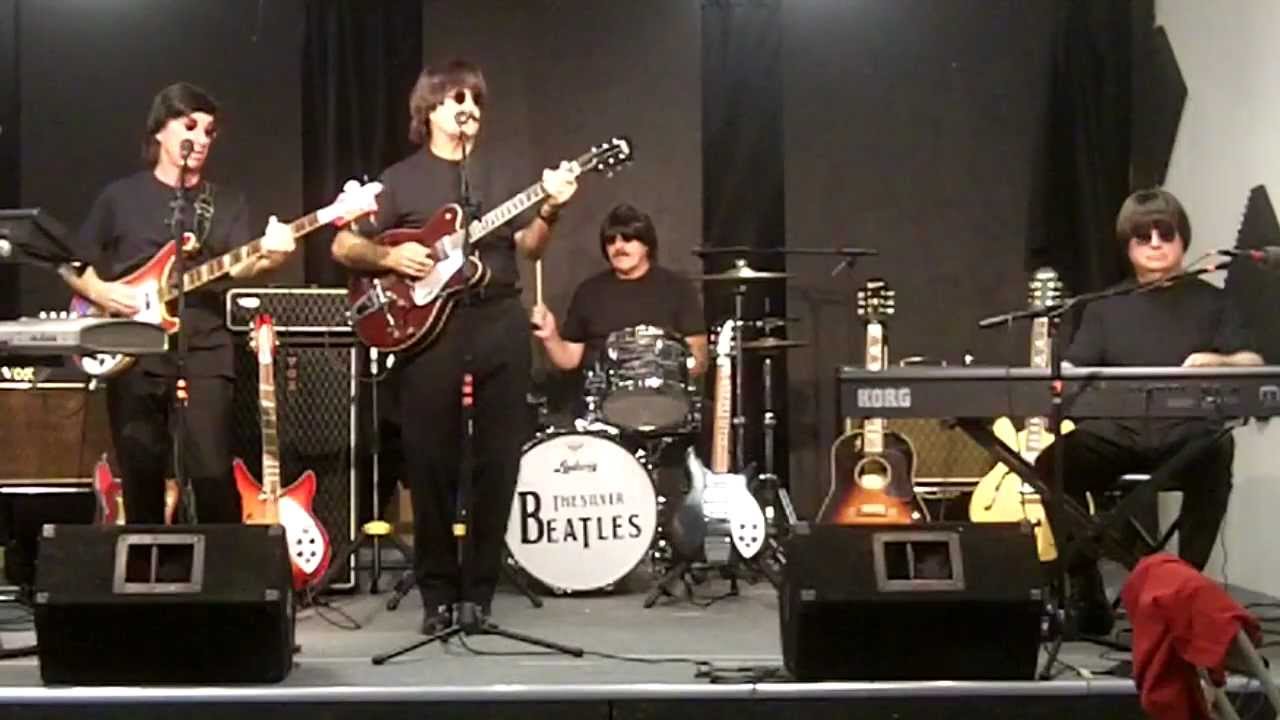 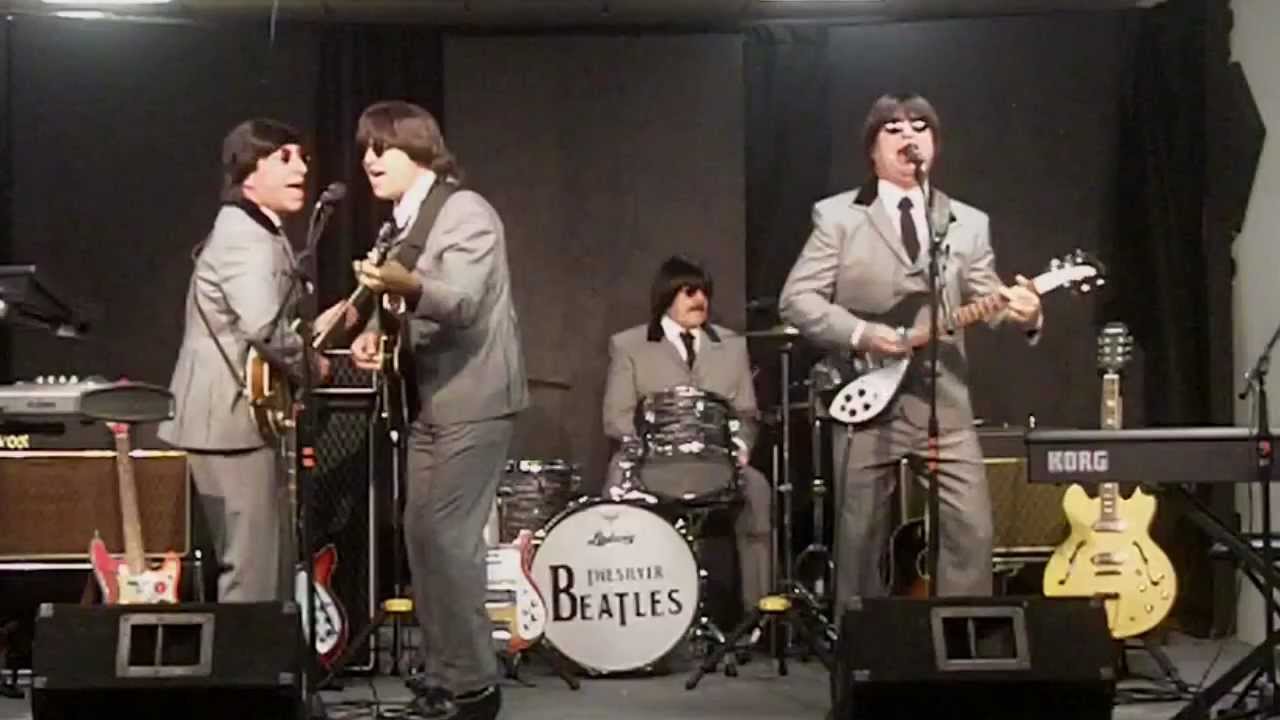 Got to Get You Into My Life, She Loves You 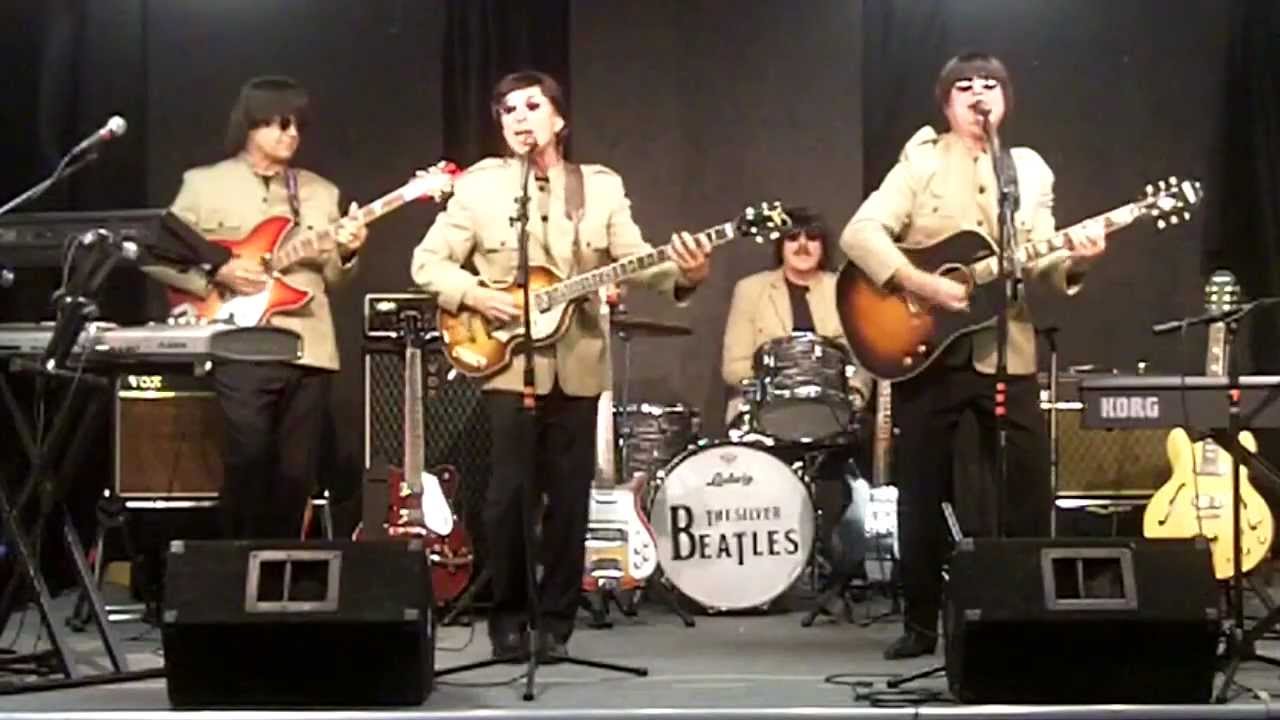 Eight Days a Week, Strawberry Fields, All My Loving 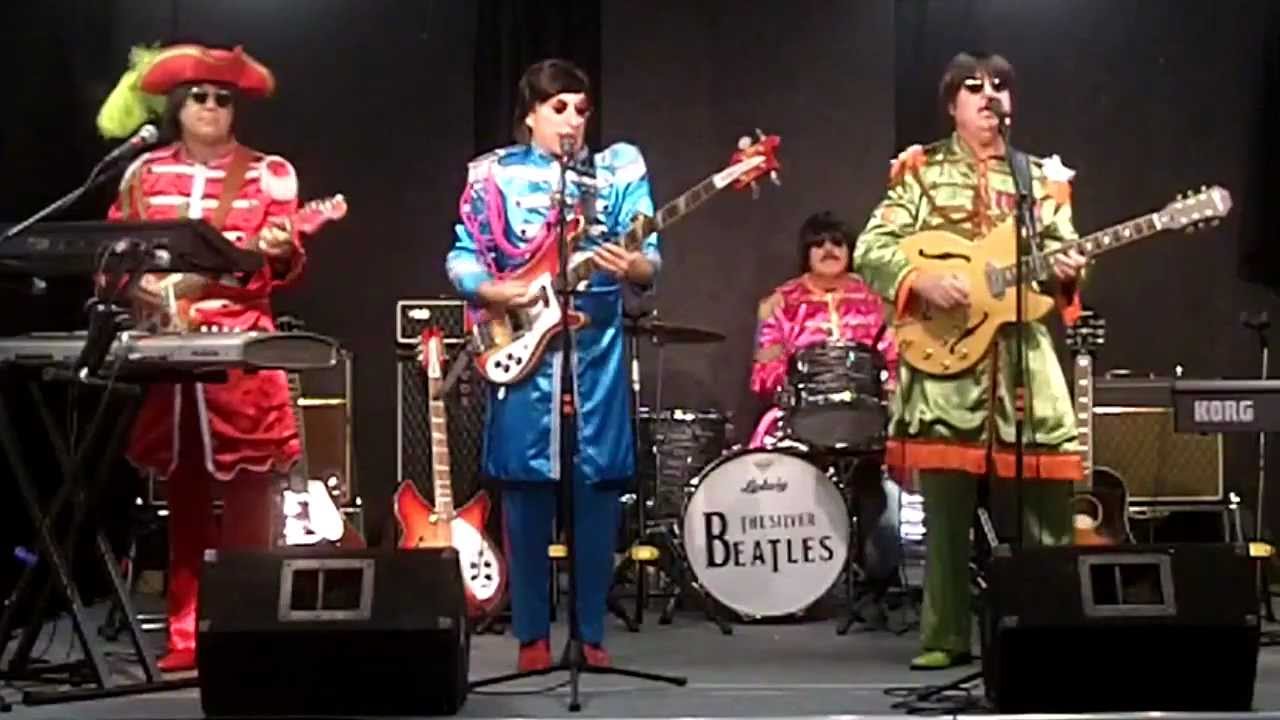 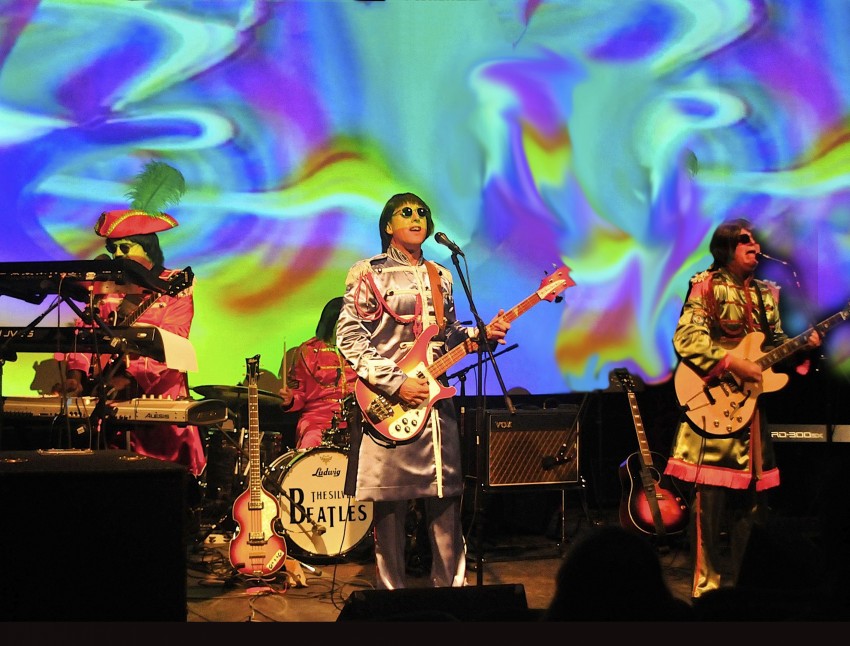 Live at the Rustic 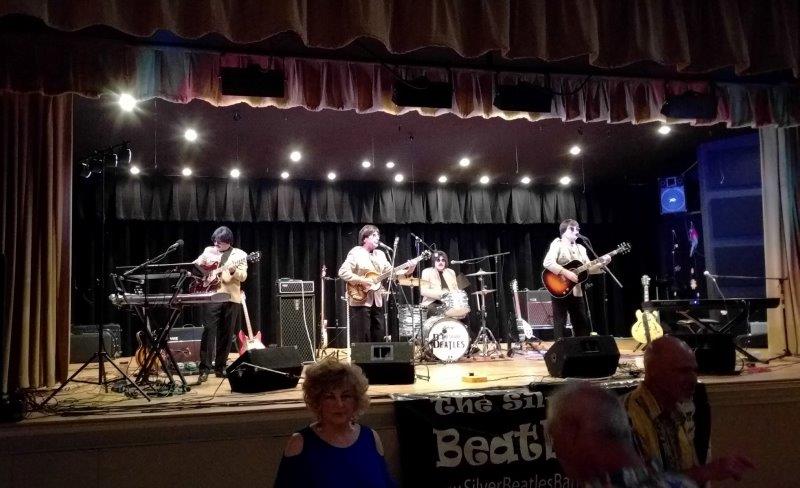 Live at the Colony

Live at the Colony (Shea suits) 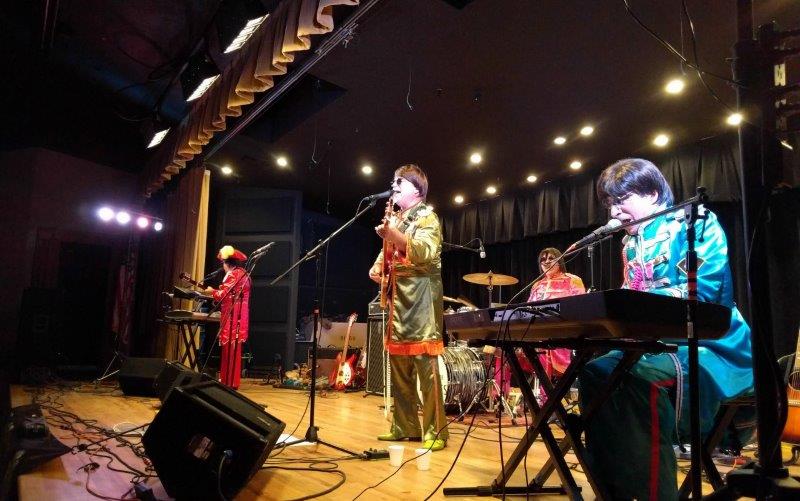 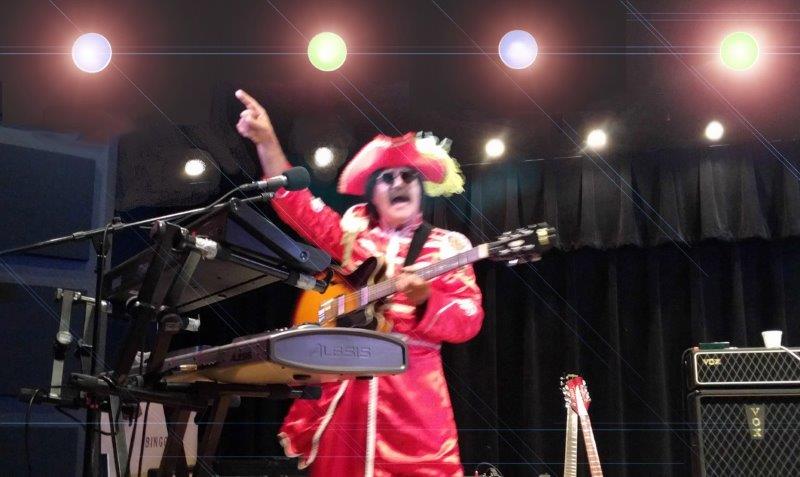 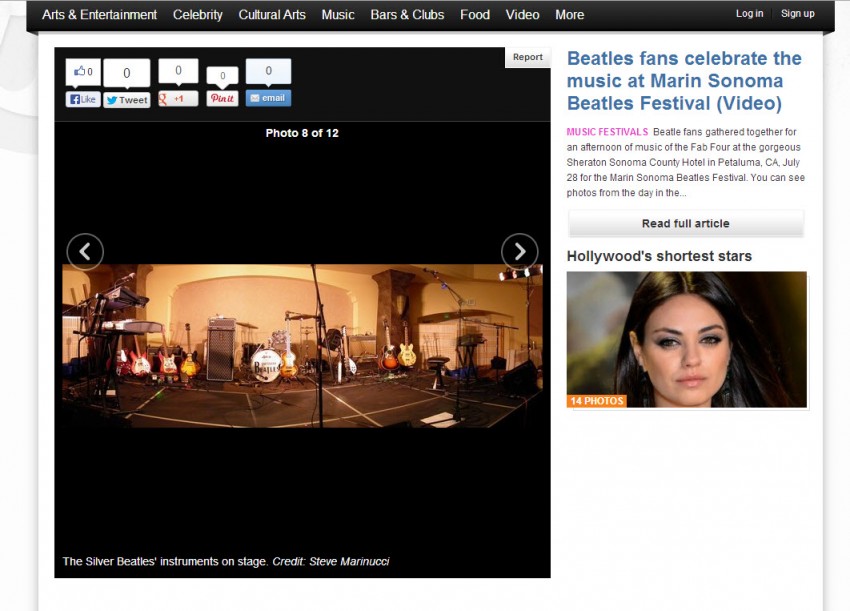 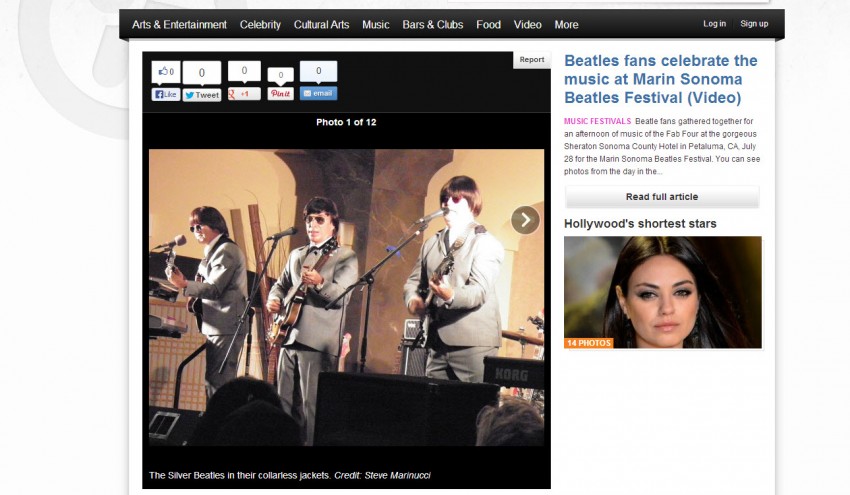 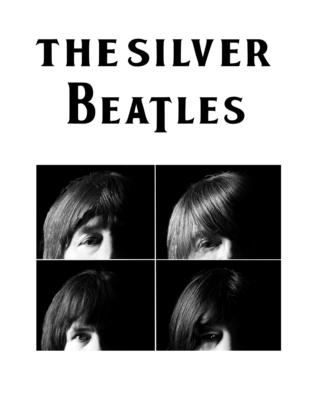 SILVER BEATLES, California's premiere Beatles tribute band, provides an uncanny reproduction the music and the magic of the Beatles. The band was formed in 2004 and has since played hundreds of events nationally and internationally, including dozens of city concerts and special events, as well as many corporate and private parties.
The USO chose the Silver Beatles from a nationwide search to entertain our troops in Japan. Other venues- Beatles Revolution Lounge (Mirage) in Las Vegas, Breakfast with the Beatles (KLOS 95.5), and playing with a full symphony orchestra for the Harmony Project in Los Angeles.
The Silver Beatles have been featured in Inland Empire Magazine, the LA Times, etc.

The Silver Beatles were fantastic at my father's birthday party. There were so many compliments from our guest about how good they were. They are an ideal band to get a party going. Thank you!

We saw the Silver Beatles perform at Hawaiian Gardens. They are a fantastic tribute band and sound as good as any Beatles band I have ever heard. I have seen Rain and Paperback Writer. These guys are better!

I saw the Silver Beatles at a New Years event and they were awesome! They sounded just like the Beatles and were very entertaining. I am looking forward to seeing them again.

“Hey Lads, What can I say guys, great show! It was impossible not to get carried away while hearing all that great music. All the hits from “She Loves You” to “Sgt. Pepper’s” and “A Day in the Life” seemed like they were jumping off the records. And the comments I received from the audience have all been positive. We’ll be having you back soon!”

When we hired the Silver Beatles, I was skeptical of the billing "Southern California's Premier Beatles Tribute" but now I know you are that -- and more. I've seen many Beatles tributes -- including a traveling version of a recent Broadway production -- and they do not come close to the sound and excitement of the Silver Beatles. Your show here in Santa Rosa boasted a crowd as large as (or larger than) local tribute bands with loyal followings. I look forward to bringing the Silver Beatles back to Santa Rosa!

The Silver beatles performed at our daughter's wedding this past July at our residence in Fallbrook . The Silver Beatles were courteous and profesional, they even learned a few tunes that my daughter requested and the response from our 100 plus guests was over the top, with the dance floor crowded and the concert chants of "more!" at the end of four hours! I would like to again thank the Silver Beatles for giving me the opportunity to give my daughter the wedding the type that will be talked about literally for decades to come. Thanks again. Mr. & Mrs. B. H. Clemens

The Silver Beatles played for my husband's 50th birthday. They were extremely professional, easy to work with, but most importantly very entertaining. When planning the party, The Silver Beatles returned all emails and calls quickly. They showed up to the event about 2 hours early to set up and were ready to play when the guests arrived. They played four sets and changed costumes between sets. My sister in law is a performer and they let her sing "They Say it's Your BIrthday" with them. They put on a fantastic show - sounded just like The Beatles. They really made the party special and I received many compliments. I would highly recommend the band.

The Silver Beatles capture the sound and look of the Beatles and play from the entire Beatles collection. We also feature 3 costume changes, original equipment and that authentic Beatles sound!
When the venue does not provide sound, the band will bring a professional sound system and a sound technician.

About the band-
THE SILVER BEATLES, California's premiere Beatles tribute band, provides an uncanny reproduction of the sound and the magic of the Beatles. This talented band will take you on an audio "Magical Mystery Tour" visiting the entire Beatles repertoire along the way. If you love the Beatles, from the Ed Sullivan years through Sgt. Pepper's and beyond, you will love THE SILVER BEATLES. The Silver Beatles wear authentic Beatles costumes to match the era of the songs as well as play instruments like the Beatles used. All ages love the Beatles music, and no band comes closer than the SILVER BEATLES!
Since 2006, the Silver Beatles Tribute Band has been featured at scores of venues and events nationally and internationally, including "The Beatles Revolution Lounge" at the Mirage in Las Vegas, KLOS Radio's "Breakfast With the Beatles", USO's "Service Salute Gala" in Tokyo, Japan, as well as numerous city concerts, corporate parties, and private parties and weddings.
Silver Beatles have also been featured in Inland Empire Magazine, the LA Times, and the Riverside Press Enterprise.
Program director, Mike Waterman, of 97.7 The River, KVRV-FM, Santa Rosa, CA, had this to say about the band after a show last year near San Francisco, "I've seen many Beatles tributes - including a traveling version of a recent Broadway production - and they do not come close to the sound and excitement of the Silver Beatles."
If you love the Beatles you won't want to miss this show.If you love the Beatles you won't want to miss this show.

The Silver Beatles can provide sound and lighting.