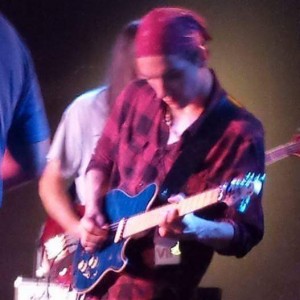 The Sam Bowman Project is a group full of dedicated musicians to play music joyful to the ear. With Sam's unique talent playing guitar for 6 years, writing music, performing music, and being a great musician, is able to create with his group a trio of such magnificent progressive rock/metal music that is pleasant to the ear. Sam owns all of his own equipment, including PA system and speakers. If you hire him, you will not be disappointed.

Expect to hear more about Sam in the near future. He's destined to make his mark in the world of music.

Response from The Sam Bowman Project:

Thank you Dana! It was a joy playing for you! I would love to play for you again at any time. It was a very magical and wonderful experience!

The Sam Bowman Project is a progressive rock trio with a straight-forward set up. Three guys playing Guitar/Vocals, Bass Guitar and Drums. Expect loud, in your face, I don't give a damn attitude in the music!

Sam has been around music his whole life, all of his sisters were involved with music programs in middle school and high school. He wanted to get involved with music at an early age, but not in the way their kind of music but find something he liked. Once he heard Black Sabbath's Iron Man, that was it, he was sold. He then picked up a guitar, and began writing his own songs and formed bands in High School. Once he discovered Progressive Rock, his whole life changed. Sam became a progressive rock musician and has written progressive rock songs ever since and has brought him to where he is now today. Sam now is involved with "The Sam Bowman Project" playing progressive rock, metal, and some covers here and there. He is satisfied and pleased with the music he plays!

We are flexible and look forward to providing a memorable performance for your next event!