The Reply Demo
The Reply

Presenting, THE REPLY. A trio of veteran musicians who refuse to be squeezed into the average cover band mold. Wait, what? A 3 piece band? That's right. Add one amazingly gifted guitarist, one blazingly smooth bass player, and one driving, rockin' drummer, and you get one tight, Power Pop band. Plus, they're all gifted vocalists! With an array of 60's and 70's hits, including classics that aren't on the average cover band's playlists, you'll be dancing and singing along to artists like Tom Petty, Steely Dan, The Beatles, Neil Young, The Eagles, The Who, and ZZ Top, to name a few. Are you ready to get the party started? If so, you won't have to wait for THE REPLY!

Be the first to review The Reply

If an audience came to see us, what would they see? A high energy, very tight, 3 piece power-pop band playing an eclectic mix of 60’s, 70’s hits and more!
If a client hired us, what would they get? For a private function or corporate event, they’ll get a group of experienced musicians who know how to get the party going while ensuring everyone in the room has the time of their lives. If its a restaurant/bar venue, this band knows how to play to a crowd, how to get them up and dancing, and then running to the bar for drinks and food!

Larry Harrison - Guitar, lead and background vocals. Larry has been writing and playing music for most of his life. His wide variety of influences range from Broadway musical greats such as Rogers and Hammerstein and Andrew Lloyd Webber, to the Beatles, Yes, and everything in between. Although writing and recording his own material has always been his true passion, Larry has also performed in a variety of bands over the years including, The Lucky Larry Band, The Kids, Blu Maxx, The Cosmic West, Teachers Pet, and a Beatles tribute band called, The Buggs, where Larry played George Harrison (without having to change his last name!) touring throughout the southeast. And now, Larry brings his blazing guitar playing skills and smooth vocals to The Reply!

Ken McCullough - Bass guitar, lead and background vocals. Ken's musical career began in the early 70's in the Atlanta area, singing and playing bass guitar in a local top 40 band, Signal. He later toured throughout the southeast with an array of musical companies including 4 Star Productions, East Coast Entertainment, and Rising Star Productions. In the 80's, Ken was a sought after studio musician while playing in the popular party band called, Culprit. In the 90's, Ken played with the classic rock band, Major Woodrow, featuring original Lynyrd Skynyrd drummer, Bob Burns. And now Ken has come full circle and back to his rock roots bringing his tasty bass licks and gritty vocals to The Reply!

Hal Eisenberg - Drums, lead and background vocals. Hal's musical journey began after he "borrowed" his dad's drum kit at age sixteen. He performed with various bands during the 70's and 80's, including, Mersyrock, Panic, and The Invaders, who received local airplay with a song he wrote called, "It's A Mystery." Hal also performed in a Beatles tribute band as Ringo in, The Fab Faux, playing for clubs and corporate events. He later helped form a Beach Boys tribute band called, Surf's Up, opening for 60's icons including Davey Jones of the Monkees, David Cassidy, and Gary Lewis and the Playboys. Hal was also in the Atlanta party rock band, PoundCake, playing packed venues and private parties. And now, Hal brings his drumming skills and rich vocals to The Reply!

All we need is electricity. If the venue provides sound and lights just let us know. Thanks!

All Day and All of the Night
All Over Now
All Right Now
And Your Bird Can Sing
Baby Blue
Bad Moon Rising
Because
Bell Bottom Blues
Blue Sky
Born to be Wild
Breakdown
China Grove
Cinnamon Girl
Do You Believe In Magic
Feel a Whole Lot Better
Fortunate Son
Get Together
Gimmie Gimmie Good Lovin
Good Girls Don't
Good Lovin'
Good Lovin' Gone Bad
Hand Me Down World
Honky Tonk Woman
I Can't Explain
If I Needed Someone
It's All Over Now
Jenny Jenny
Just What I needed
Last Train To Clarkesville
Let it rain
Listen To Her Heart
Lodi
Magic Carpet Ride
Memphis Tenn
Midnight Confessions
Move Me on Down the Line
Movin On
Mr Tambourine Man
Mrs. Brown You got Lovely Daughter
Needles and Pins
No matter What
No Time
Pride and Joy
Reelin' In The Years
Rikki dont loose that number
Something
Sultans of swing
Sunshine of your Love
Take it easy
Teacher Teacher
Till there was you
Touch Me
Twist and Shout
Witchy Woman
You Wreck Me

The Beatles, The Doobie Brothers, The Grass Roots, The Guess Who, Cream, The Byrds, Tom Petty, The Rolling Stones, The Eagles, Bad Co., & Steely Dan. 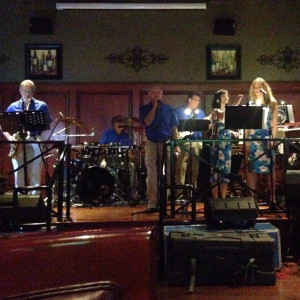 R B. said “Great band. Great song selection. They played all of the old classics that everybody wanted to hear. They had the young and old out on the dance floor…”

Otho T. said “Yana performed at our holiday party. She was outstanding in her performance of jazz & latin piano standards. She also surprised us by playing guitar!…”