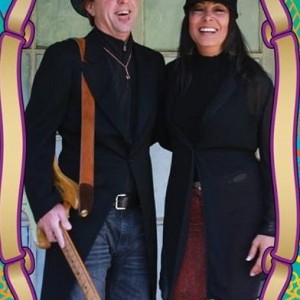 We are an Original Roots Rock and Soul duo/Band, Acoustic to electric.
we throw in a few covers as well. StevierayPettymeetsYoung

Be the first to review The Jeff Jolly Band

Originally hailing from Brooklyn, New York, Jeff Jolly drew on influences from artists such as Neil Young and Bob Dylan to develop his own song writing style. He travelled throughout the USA and other countries to play, jam and experience life, writing songs that expressed his life and love for music. He eventually settled in San Francisco and set about creating the Jeff Jolly Band, introducing new elements to the sound, reminiscent of George Thoroughgood and Stevie Ray Vaughan.
His union at center stage and in life with Desiree Jolly provides additional stunning vocals and harmonies, completing the recipe for great sounding songs that tell a story. Their 1st album entitled “The Runner” was hailed as the “Band to look for” in Relix Magazine and “Raw Material”, album #2, picked up Album Of The Year from Canada’s Blues On Stage magazine, with the track “Living Without” featured on NBC’s Friday Night Lights. A ten night sell out tour of the iconic Club Chesterfield in Paris, France, produced the Jeff Jolly Live album. They are currently working on their 6th album, due out in the summer.
Jeff and Desiree articulate the landscape of American rock and pop through a unique duet style leaving the listener enchanted by their soulful interpretations. “They have worked equally well in front of diverse audiences, whether it be funky James Brown crowd or a folksy intimate gathering at the local pub” quoted Brian Martin (Manager of James Brown & George Jones).
Jeff Jolly band has shared the stage with folks like James Brown, Little Feat, David Crosby, Los Lobos, George Thorogood and Brian Setzer to name a few. They have played in pubs & clubs, festivals from 100 to 80,000 people at San Francisco’s 40th anniversary of “The Summer of Love” and “The 40th Anniversary of Woodstock” reunion.
After a successful European Tour in 2013, Jeff Jolly band heads into 2014 with a new year full of exciting plans. Their 6th studio CD will be released in the summer (2014). The new CD will be a Roots, Rock and Soul musical mix of original material and a little surprise cover song. The group will be touring North America early spring and onto Europe late summer early fall.
video : http://youtu.be/oDm9_ev1PEc
http://youtu.be/LwB-P1UfB6M
http://youtu.be/_zQ4Glwp1ks