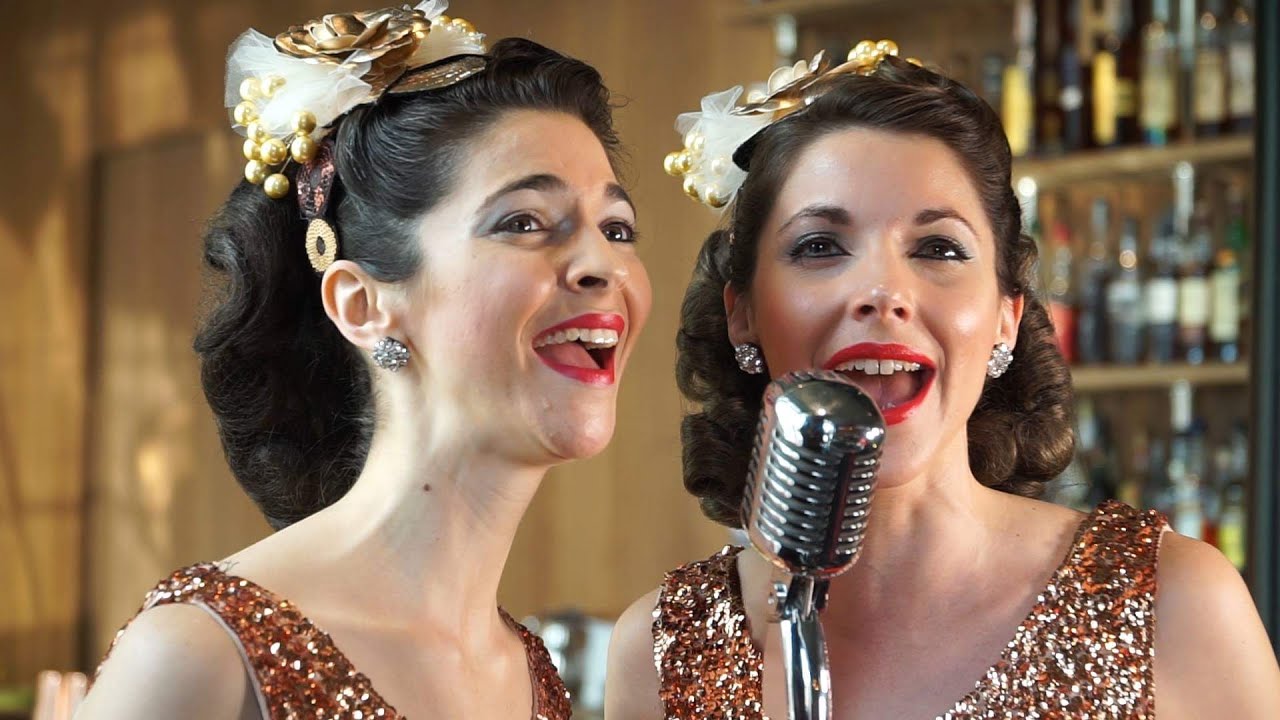 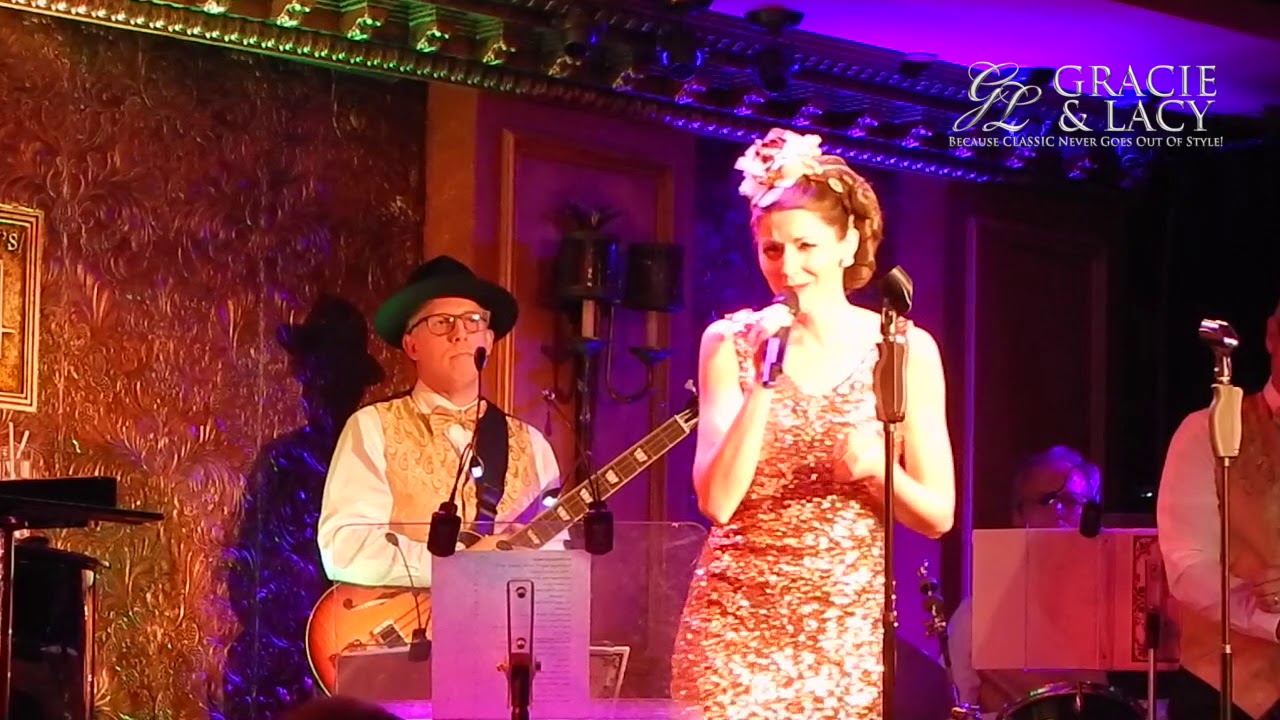 Gracie & Lacy and The Legends Band 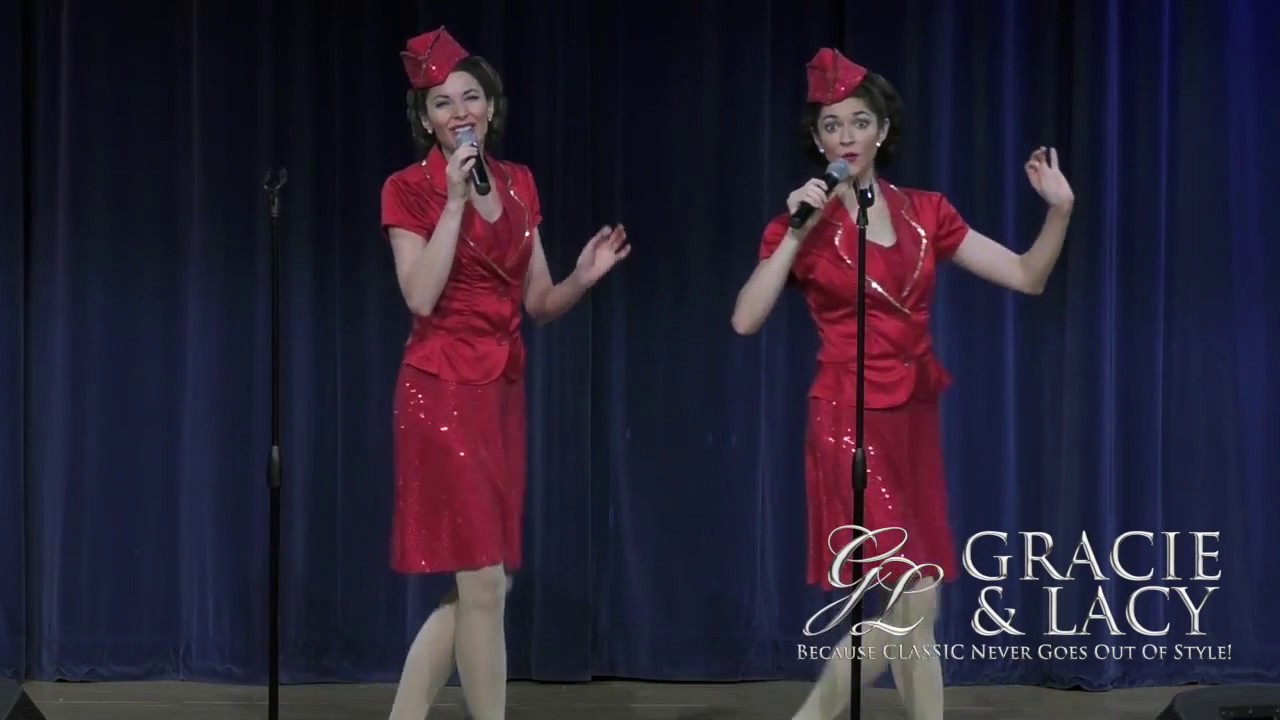 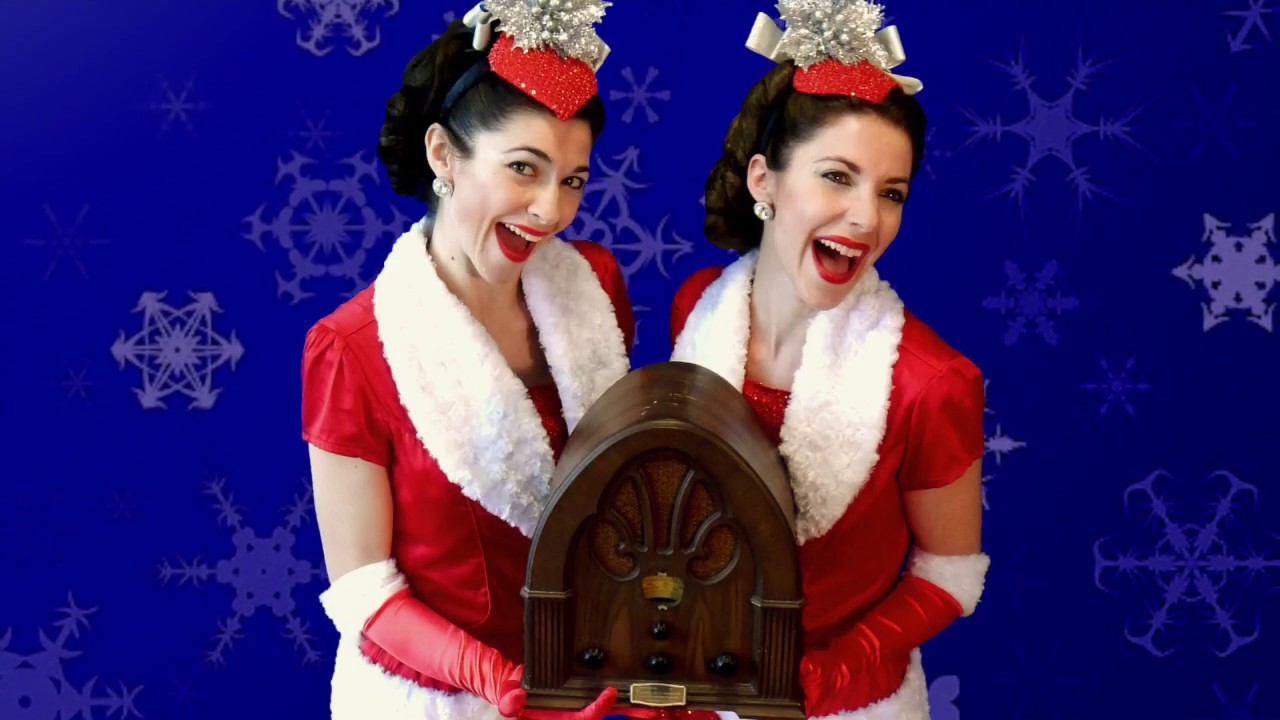 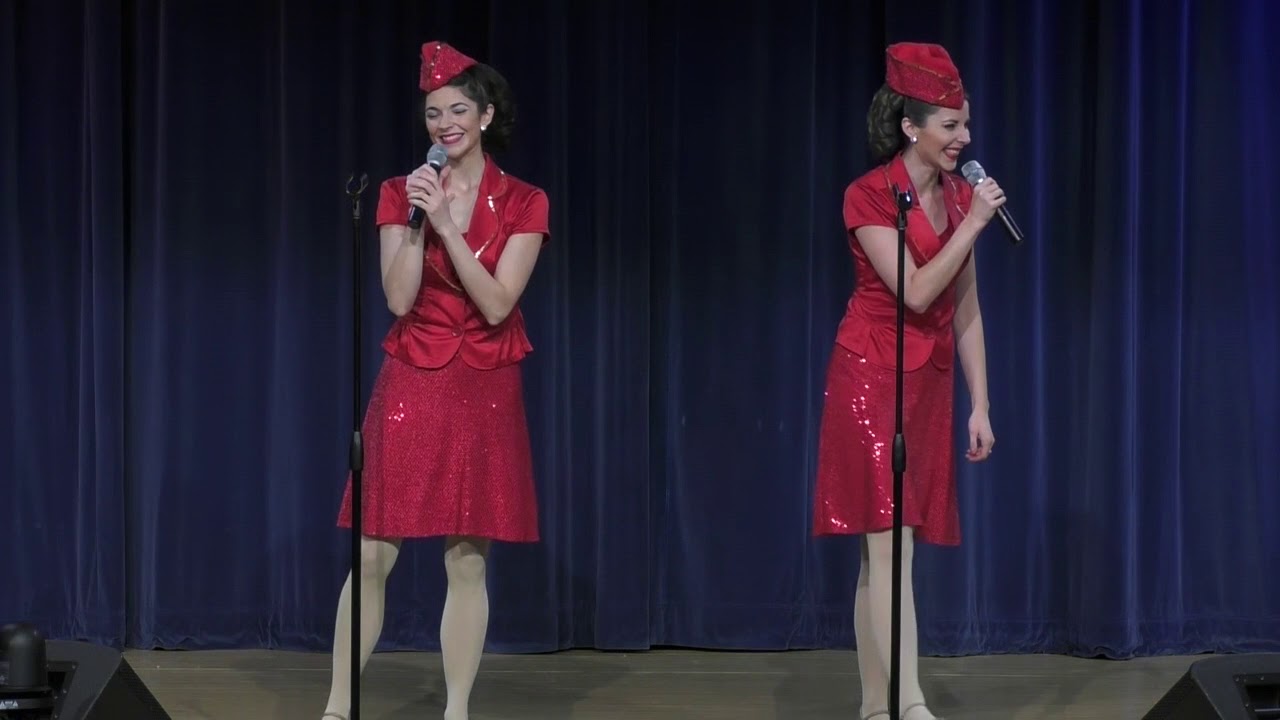 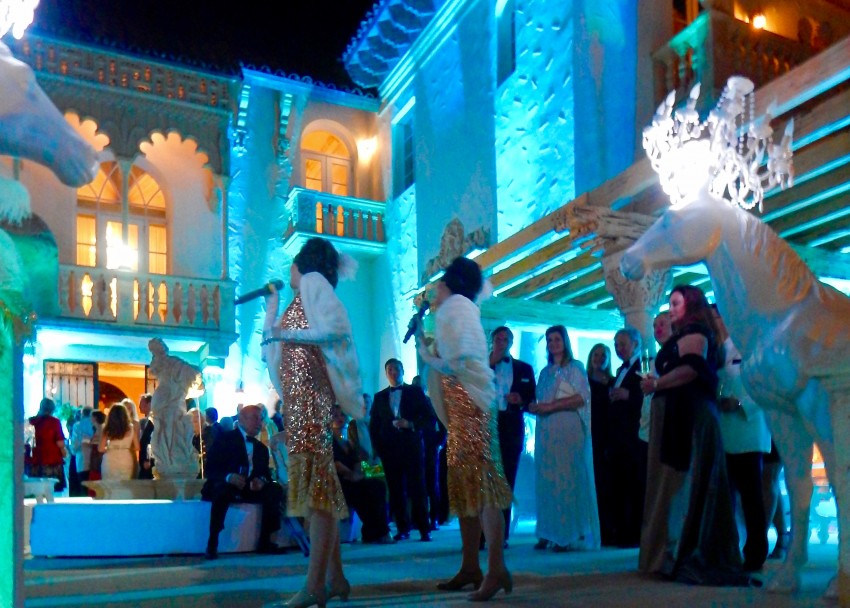 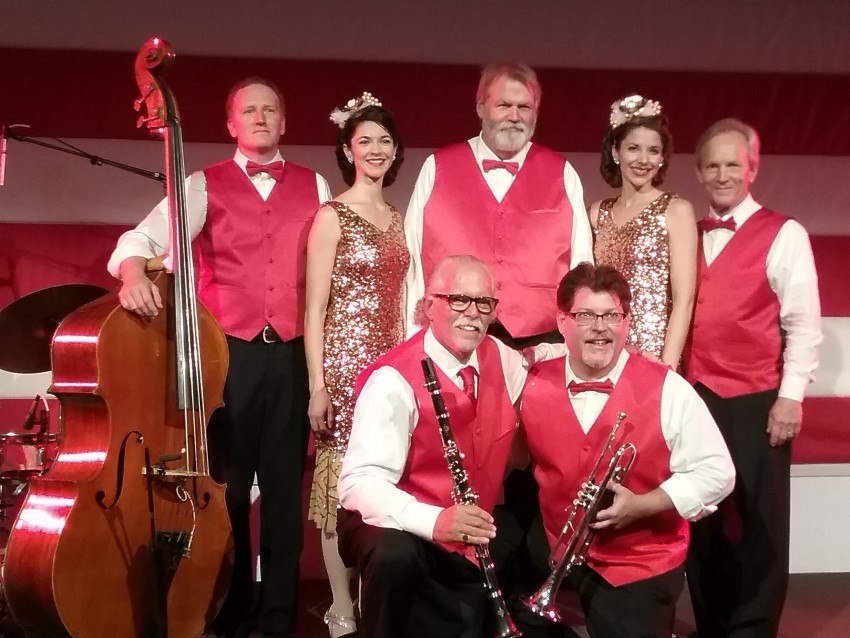 With rave reviews in NYC and hailed as "one of the most celebrated teams" in the Lowcountry (Lowcountry Today), Gracie & Lacy are the go-to act for elegant private, corporate, and special events nationwide. Gracie & Lacy are real sisters known for their "smooth-as-butter" harmonies, tap dancing, charming humor, and vintage-style costumes.

"Our guests were over the moon with your style!"
- Robert Sullivan, Absolutely Charleston

Scaleable to your event: with digital music, pianist, combo, or Big Band options.

Note: Lodging, Airfare, Meals, and Ground Transportation may apply depending on the city Gracie & Lacy are traveling from.

They were fantastic for our event! Highly recommend!

crowd pleasers for all ages

we had an audience aged 9 months to 90- spectacular as they entertained all. It was our dads 90 birthday party he sure felt special. They even gave special attention to children who were way too close to the stage. Extremely professional, very talented and gracious... class act

Response from Gracie and Lacy:

Dear Kathy,
Thank you for your feedback - we were honored that we could be part of such special day for your family. It is so special to see families celebrating life and special milestones together. It was a pleasure meeting you - thank you again for choosing our show!
Best wishes,
Gracie & Lacy

Gracie and Lacy were a treat and I'm so happy we had the pleasure of hearing and seeing them!! Highly recommend this duo; they are awesome!!

Response from Gracie and Lacy:

Thank you for your kind words Jennifer, we loved working with you!

Great Entertainers for Our 55+ Event

Swing St Louis entertained our group of 160 on August 2, 2013 in Rock Island, IL. They were consumate professionals from the first call to the follow-up emails to the arrival, show and tear down. We will be hiring them again soon.

So far I have a group of 70 plus people coming to the 12-04-2010 event. This is based on past audience experiences with this theatrical group. The anticipation and enthusiasm by my group for the upcoming event is off the charts. As a result this is the largest group I have ever had sign up for such an event.The following is what my people said about their last production:
Kathy: What a great musical!
Sheri: Fabulous!
Carla: Excellent presentation
Mark: Excellent
Barry: Wow
Debi from Il: very talented group of kids
Rod: a great experience
Share: very good production
Larry: loved it.
Sue: I thought this was great.

Our "MUSIC & MAGIC IN SAVANNA" audiences are still talking about "Swing St. Louis!" From the moment they arrived at my theatre, Lacy and Emily Miller, along with sound technician Sallie, were the most professionally attired, groomed, and behaved artists I've ever witnessed! Their set-up was efficient, quick, and cheerful. The show itself, in a word: Phenomenal! Melodic harmonies, amazing dancing, and striking costumes. Best of all, we did two shows, October 2 & 3, 2010, and our audiences loved them. Highly recommended. If you are a responsible for hiring entertainment for any type of event, your job won't be easier and the results more successful.

We hired Swing St. Louis to perform a show for our seniors group on Wednesday, December 9, 2009 here at the St. Charles Parks & Recreation Department. They did a fantastic job and our senior group loved them. We would not hesitate to hire thenm again for future events.

Thank you for choosing Gracie & Lacy for your event!

Gracie & Lacy tour with an experienced road manager who will help make your event run seamlessly. We provide you with a detailed Tech Rider and Stage Plot for easy planning. In addition, Gracie & Lacy make every effort to be available for event-related press interviews, and promotional TV and radio spots when needed. Press photos, press copy, and poster templates are available upon request.

On with the show!

Real-life sisters Gracie & Lacy got their start in show business in an unlikely place. When just 8 and 10 years old, they were mesmerized by a production they saw on the Goldenrod Showboat. It was then they decided that they would get into show business. Back home, they strung their bedsheets onto a garden hose and hung it across their garage door to make their own stage. They posted audition notices, ran rehearsals, and thus, "Broadway On The Driveway" was born.

The driveway shows became a summer tradition in the small suburb of St. Louis. They were such a hit, if fact, that the growing crowds attracted the attention of the local law enforcement due to traffic jams. The mayor offered the use of the local amphitheater so the growing troupe could continue. Soon "Broadway On The Driveway" outgrew the space and the sisters organized fundraising campaigns to move the shows into performing arts centers. By this time the team had grown to over 150 volunteers, a full orchestra, technical crew, and casts of up to 90 performers.

As Broadway on the Driveway grew, Gracie & Lacy began to receive performance requests for special events. They began to script their own sister act variety shows patterned after Vaudeville performers. Their style is highly influenced by the stars of classic movie musicals of the 20s-50s which they imitated, borrowing every VHS tape their library had. They studied the stage presence, tap dance steps, acting style, and comedic timing of performers such as Judy Garland, Fred Astaire, and others. Lacy learned to sew and soon they were known for their vintage-inspired costume wardrobe and signature '40s hairstyle. Little did they know at the time that Gracie & Lacy would become their full-time career.

Today, Gracie & Lacy present world-class entertainment for corporate and special events. In addition, they tour a variety of show titles for Performing Arts Centers highlighting the music, dance, history and fashion of the Golden Era. The sisters also enjoy a variety of speaking engagements from motivational to educational. They are grateful for the opportunity to do what they love for a living while having the opportunity to uplift and inspire their audiences.

"If you weren’t there you missed a great show."
The California Democrat

"Quite the BUZZ in the air still!"
Peggy H.

Dressing Room
- Costume changes occur throughout the show, a private dressing area should be provided off stage left or right
- Pipe & Drape is suitable for dressing room (be sure fabric is opaque)
- We can provide a 4'x4' pop-up dressing stall to place behind drape

Song & Dance selections vary by show title and theme - some of our most popular routines are:

Venue must be equipped with ramp / elevator - All equipment is on wheels.