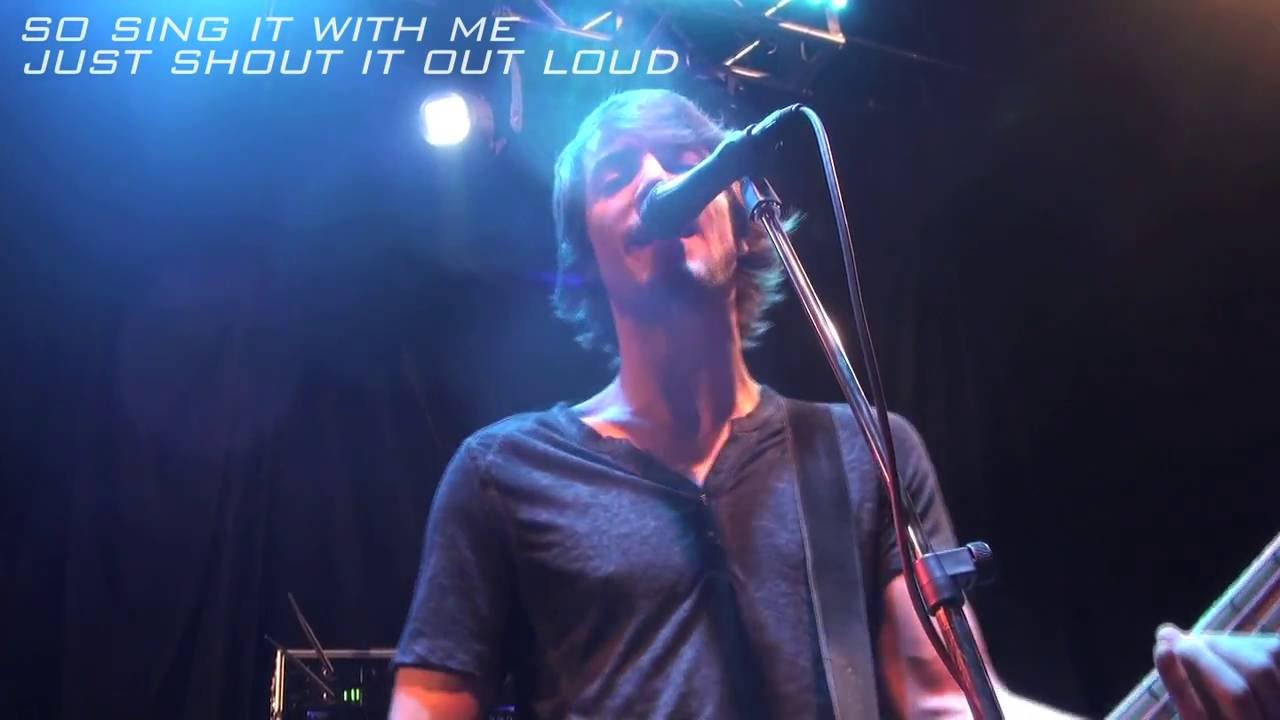 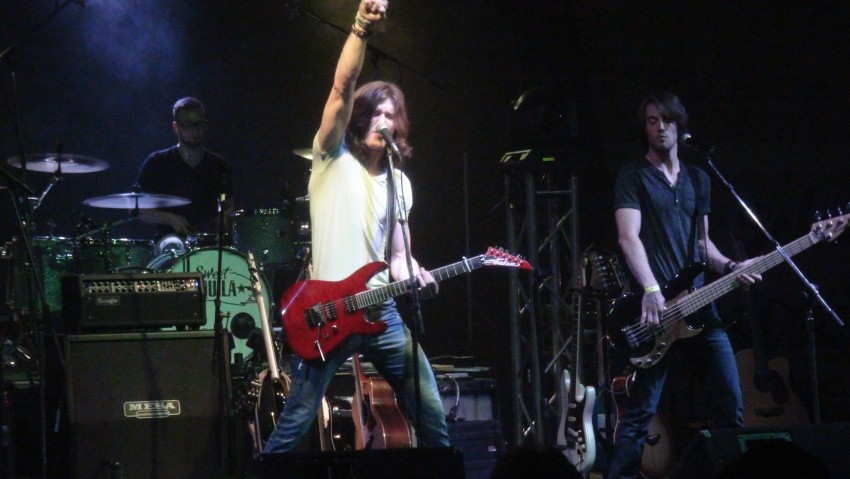 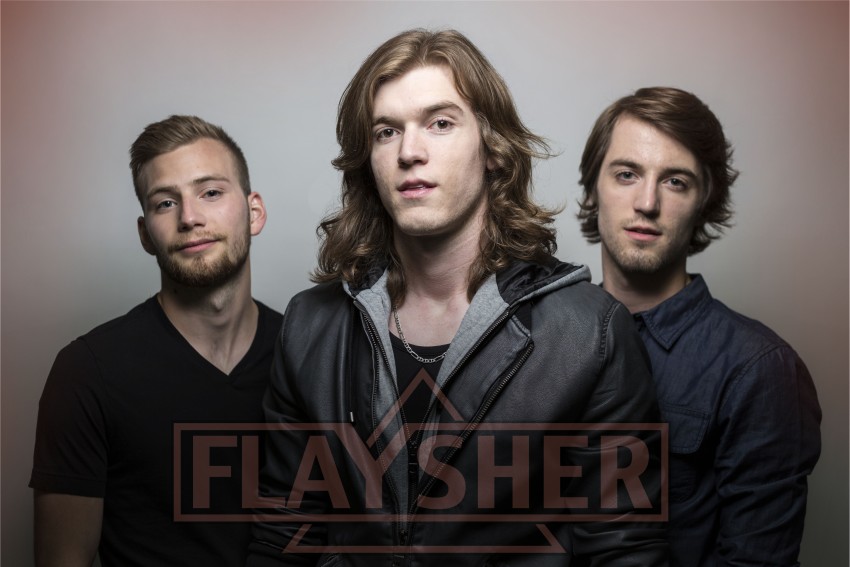 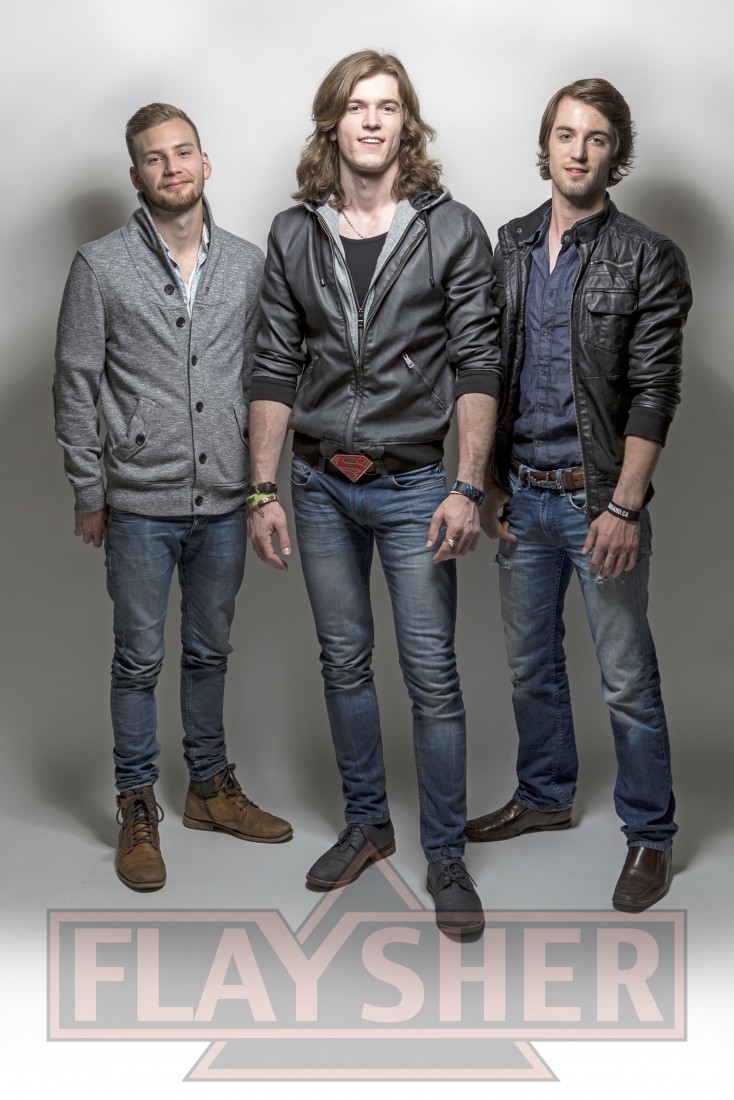 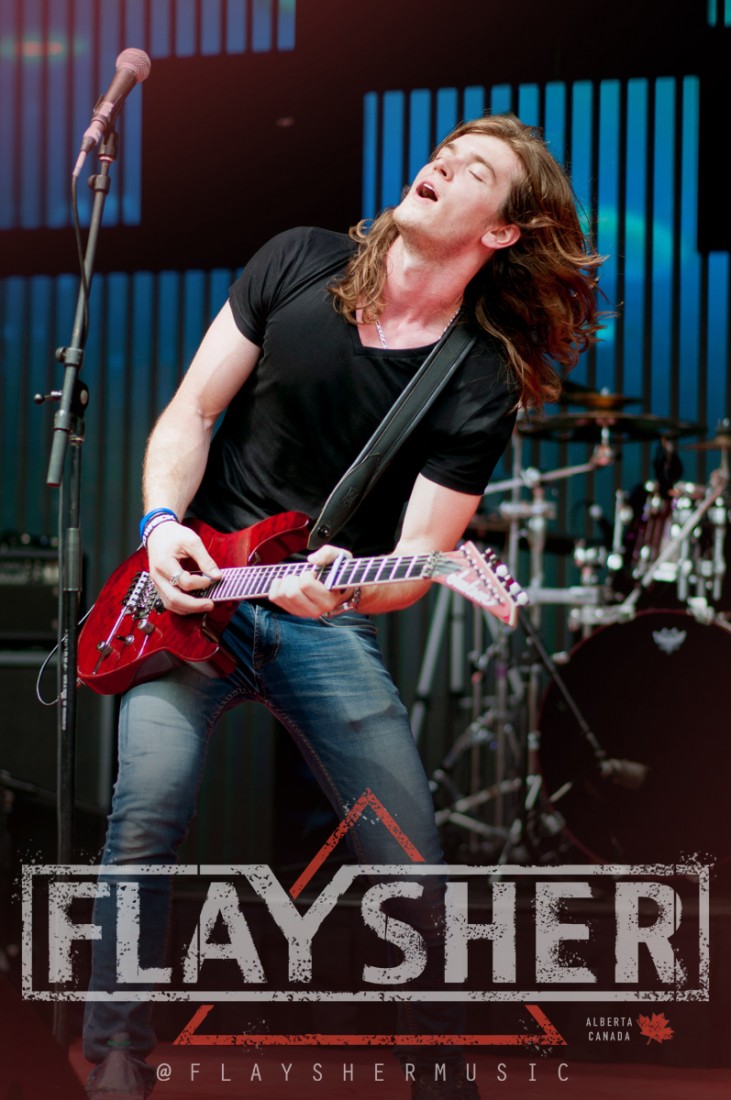 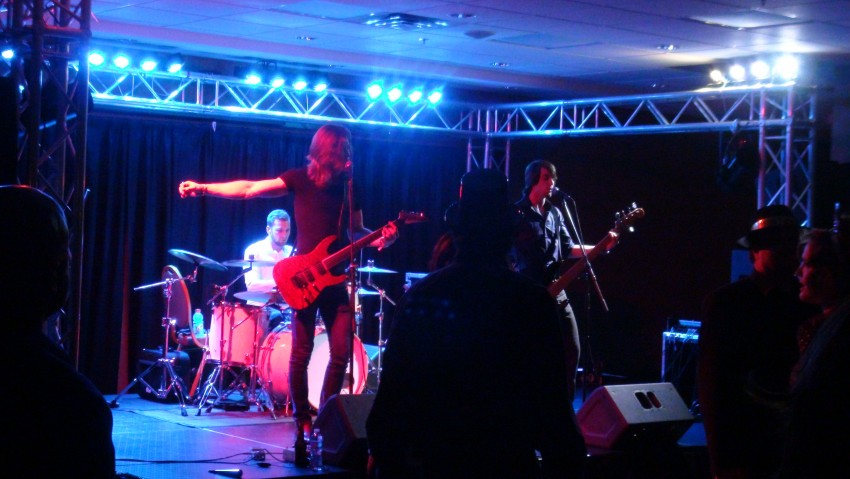 Flaysher (formerly STORM) has been perfecting the art of performing, impressing audiences of up to 6000. Fun-loving but with a mature sense of professionalism, these guys are the perfect addition to your event!

Check out the reviews! We have all our own high end equipment and lighting to make booking as easy as possible. We play all kinds of events, and would love to work with you to make your event one to remember.

i would like to give a very big praise to the great guys who contributed enormously to our wedding . You have been great and also all our guests loved your music. From jung to old everyone was enthusiastic. We are looking forward to book again soon and are very happy to have made a good meeting with you. Besides our little Richard is now a big fan from you guys too hehe....

I have meant to provide a review for the band for a while now as i feel that it is very important. I had booked the guys now twice for our outdoor private venue, the first year we had 50 or so guests (2015) and this past year (2016) we had over 100t. Do not let their age fool you, the guys are nothing but professional and come with an excellent set up, with all the bells and whistles that you will need: Lights/Smoke/and one great sounding set up.
The Band and their crew are extremely accommodating, dedicated and quite honestly, a lot of fun to be around. Great mix of music for everyone to enjoy, INCLUDING their original material. You wont be disappointed! I would be happy to personally discuss our experience with Flaysher.

If you want ROCK! These guys got it!!!

We just had Flaysher play at our wedding dance and these guys were AWESOME!! We had so many compliments on their performance and impressive stage presence.
From initial contact and booking to seeing them perform live, these guys were top notch!!
They made sure we had the VIP experience and even helped make our "Rock n Roll" themed wedding that much more awesome by making an amazing smoke and light show for the ceremony!!
We 100% recommend booking this band for any occasion.
Thanks guys, you ROCK!!

So impressed with these young men and there crew

I hired Storm for my wedding. And what an amazing Jin they did. They were so perfessional. So nice and easy going. All my guests We're blown away by there performance. We will be having a reunion and I hope I can hire them back for it. Was such a pleasure meeting all of you and have the great experience you gave us. The wedding wouldn't have been the same with out you. The event was at Payne Lake Lodge. The event city couldnt find that so i put Airdrie. Thank you so much. Lenora and Ben. ♡

Thanks for the review! It meant a lot to us to be part of your special day. It was such a pleasure meeting all of your crew. Crazy how quick you made us feel like part of the family! We would love to perform at the reunion. What an amazing weekend, I can promise you that it will be a memory that we cherish almost as much as you and ben ;)

Looking to book them AGAIN!

These young guys were 100% professional and 100% awesome!

I must admit, I was a bit skeptical booking them for an 80s-themed Anniversary Party after only hearing them online. But they delivered! By the middle of their first song, the guys with their arms crossed at the back of the hall uncrossed their arms, were smiling and tapping their toes. By the beginning of the second song, they had a crowd dancing in front of the stage. And by the end of the night, the partiers were chanting, "one more song!"

The most impressive part of the evening, for me, was when I asked them if they could sing "Fishin' in the Dark" as a dedication to the bride (her favourite song). Brad, the lead singer, seemed familiar with the tune, but his bassist didn't know it. By the time their 10-minute break was over, they were ready! The song sounded like they had been practicing it all week! Very impressive!

I would certainly book this band again. In fact, I already have!

"When we started planning our wedding one of the most important aspects to us was having live music. We hired STORM and we could not have been happier, besides being incredibly talented STORM was extremely easy to work with, professional and accommodating. Our wedding guests loved the live music and commented on how talented the band was. We would recommend STORM for any function big or small, you will not be disappointed with this band!" Ashley & Travis (Invemere Wedding August 2014).

When this band first hits the stage, the audience peers on with an "oh great a bunch of kids" gaze in their eyes... But once these boys start to play... The entire room lights up with amazing energy, and the crowd is completely enthralled with all they have to offer...

The night begins with a room full of skeptics and ends with ENCORES being begged for...

Wonderful to Work With, Great to Listen To!

We worked with Storm during our One Act Play Festival in Airdrie, and we could not have been more pleased with them. They worked with us to create buzz for not only their portion of the event, but for ours as well. They had a great mixture of cover and original songs, and great energy. I appreciate their willingness to try something new, and their humble attitude. I would not hesitate to work with them again, or to recommend them to everyone I know!

Being Taken by the 'Storm'

We hired Storm for a corporate breakfast and we were taken by their talent, energy and the amazing party atmosphere they created. We loved their cover tunes and they seems to know anything we threw out there for requests and they totally blew it wide open. We were also very impressed to hear the original material they had written. They definately know how to rock! They are very respectful and professional. Good times are guaranteed - you'll be 'taken by Storm' like we were!

STORM's performance was unbelievable at the event I hosted! They provided a large variety of music, lights, and sound equipment! It was a pleasure working with them, for they have a very professional attitude, and are enjoyable to be around. The band members reach out to the audience and get everyone involved. They had great communication and a great team. I would definitely recommend this band to anyone hosting an event interested in live music!

Our experience with live performance helps us tailor the experience to make the night shine for everyone in the venue. The one thing that stays the same no matter where we go? Our drive and passion for having everyone leave at the end of the night with an amazing experience to linger in their memories for days, months - perhaps even years afterwards. We strive for excellence, and we appreciate every audience member & opportunity that comes our way!

Small town Alberta boys with a sound as big as its sky. Watch out for Flaysher. This power-trio has been developing their hook laden melodic rock since it was formed back in 2008 by brothers Brad (Singer/Guitarist) & Ryan (Singer/Bassist) Flaysher in their early teens. The pair then adopted long-time friend and drummer Brandon Alberts in 2012 and have devoted themselves solely to the pursuit of music. Flaysher has spent their time honing their craft and making fans of those fortunate enough to experience them live. This rapidly growing, devoted fan base propelled them all the way to the semi-finals of the CBC Searchlight Contest in 2015.

All in their early 20s, the boys from Airdrie, Alberta are already road-tested veterans with over 200 performances across Western Canada sharing the stage with acts that include Canadian icons like Tom Cochrane & Red Rider, The Headpins, Harlequin and Nick Gilder!

Along with their recent rebranding, the band has been working tirelessly over the past year on their debut EP ‘Starting Over’ which is set for independent release in 2016. The original 5-song EP (with pre-production by JUNO award-winning guitarist/writer/producer Russell Broom, and recorded/produced by Mark Troyer at Evergreen Sound in Calgary) delivers a strong statement as the band prepares for its emergence onto the national music scene. Their seasoned songwriting is heightened by driving, hook-filled rhythms and melodic guitar riffs. Overall, The EP is a testament to realities in coming of age, living life and the pursuit of a dream. “I wrote these songs to encourage optimism and confidence.” Brad explains, “The sky is the limit for those who have faith in themselves and consistently try their very best.” The EP is already receiving initial interest from radio stations across Alberta as the band gets set to release their first single ‘The Cage’ from the new project. The single, like many tracks off the EP, draws on the bands classic rock influences and fuses it together with their pop/alt-rock sound to create an anthem-sized statement on the potential for this crew, “When the world seems just out of reach, you’ve gotta try to see what you can be.”

According to Ryan, “Performing is a huge part of who we are. We live and breathe for the next time we get to step on stage.”

Get ready to experience Flaysher.

Our Mission Statement as a Band – “We embrace challenges. We set high standards. We push the limits. We do what’s right. We stand tall and proud. We learn. We care. We believe. We are a team, a family. We are Flaysher.”

We are prepared to bring:

- Our own pristine and professional sound equipment (e.g. Amps, speakers, mics, cables, mixing board, effects, etc.)
- Our own impressive light show, complete with a water-based fog machine.
- Recorded "Filler" music to keep your event going strong during our short breaks.
- Our own team including 3 musicians, a sound technician, and a lighting technician.
- A fantastic professional attitude topped off with a smile :)

- Performance surface must be flat, level, smooth, and sturdy with the minimum dimensions of twelve (12) feet deep and sixteen (16) feet wide with adequate shelter in place above performance area.
- Easy access to three or four clean power outlets for our equipment's power supply.

For a long time classic rock was our niche. Soon though, we started noticing that a lot of people wanted to hear some pop songs mixed in with the classics. We took that as a challenge.