Solon Z and the Sapphires 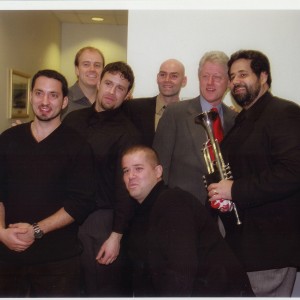 Book the best Boston wedding band for your wedding and corporate entertainment events: Solon Z and the Sapphires - a 24 piece big band swing orchestra! Hire the most talented wedding band in Boston, and make your event the most talked about of the decade!

Be the first to review Solon Z and the Sapphires

Solon Z and the Sapphires (a 9 piece orchestra, with the ability to go to 24 pieces) can perform straight big band, jazz, opera, funk, disco, pop & Rock!

Book the best Boston wedding band for your wedding and corporate entertainment events: Solon Z and the Sapphires - a 24 piece big band swing orchestra! Hire the most talented wedding band in Boston, and make your event the most talked about of the decade!

This Frank Sinatra sound alike wasn't only a fan of the Beatles, but other artists as well. He had grown up listening to the likes of Elvis Presley and, of course, Frank Sinatra. He liked that style of music in addition to the British pop music of the Beatles, the Who, the Clash and others. However, his piano lessons growing up weren't wasted. He started writing his own music and would learn the things that he wanted to play. Eventually, he even taught himself how to play the guitar and would regularly entertain his family and friends.

In college he formed his first professional band "Guy Smiley" and performed regularly at Boston's most popular bars and clubs, as well as many wedding receptions. He and his band performed over 1,000 shows in 10 years. His biggest skill had always been impersonating each of the singers whose songs he performed. This vast experience led to him one day becoming the best Frank Sinatra impersonator. It gave him the experience and skill he needed to start performing on the stage for both pop music and providing corporate entertainment around the country.

Solon Z's band gained a large following, leading to him performing for and meeting President Clinton after Clinton’s farewell show back in Boston 2001. Clinton was impressed with his Elvis Presley impersonation but that wasn't the only one he could do.

He would regularly impersonate a variety of singers, including Paul McCartney, Jim Morrison and Joey Ramone. There was a funny side to him too, and he regularly incorporated comedy skits, impersonating various Greek and American comedians. But, he developed his love and study of Frank Sinatra when at 21, he borrowed the CD Album, “Come Swing With Me” from the Weston Public Library. He couldn't stop listening to the album, and soon bought many more albums, memorizing every line and melody of Sinatra’s repertoire. After years of performing on stage with his rock band, he began rehearsing and performing Sinatra's music.

"Solon Z and the Sapphires", a Big Band Orchestra that provides high-class entertainment making your event the most talked about of the decade! We vary in size, depending on your budget and needs with our talented lineup of professional musicians who have over 50 years of collective experience as performers on various levels. Proper entertainment for your event can either make or break its success, and we are ultimate pros when it comes to perfection!

Our main catalogue is the Classic American Songbook, but we are adaptable to many different settings, expanding or reducing our line-up as needed to fit any stage, venue or mood. Our songbook is extensive and versatile: from the colorful American Songbook Jazz of Frank Sinatra and Bobby Darin, to the show band music of Elvis, to Pop & Motown, or paying tribute to Broadway with original arrangements of musical classics like “Singing In The Rain”.