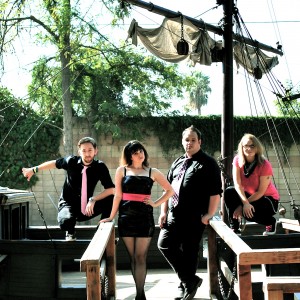 Based in Fresno, but we don't mind travelling! We can do anywhere from a 15 minute set to 2 hours plus. We do original songs and covers.

Please feel free to head over to any of our following websites for more information or to hear what we sound like!

Be the first to review SirenSinging

Based out of Fresno, California, SirenSinging is lead by singer/song-writer Allison Saleh. Now 23, Allison began writing songs at only 10 years of age as well as taking singing lessons at the age of 6 and piano at age 5. Taking a hiatus from songwriting, she went to Biola University in 2006 to pursue a Bachelor's of Music in Vocal Performance (Graduating Fall '2011). However, when a life-changing event occured in March or 2010, she was inspired once again to write music and share her soul with whoever would listen.

Originally starting as a solo project, SirenSinging's band was formed in early 2011 by people volunteering. Now a full band, the band is comprised of JP Sander, Katie Steinhauer, and Cameron Briggs. SirenSinging's first EP, "Things I'll Never Say" was released on March 9th, 2011. Currently, SirenSinging is writing new songs for their upcoming new EP due for release in 2012.

SirenSinging released her first EP, "Things I'll Never Say" on March 9th, 2011 and is currently working on writing and recording new songs for a new EP due in 2012.

When I Saw You
Ironic
You & I
Singing The Blues
Wish I Could
I Know
Mr. Fearless
I Want You