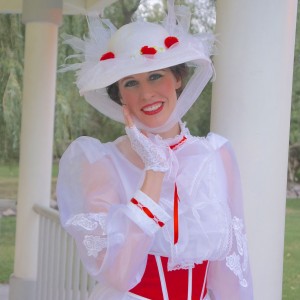 High Quality Singing Telegrams. Has sung at over 1200 parties and events for both adults and children.

We used a singing telegram for our boss's birthday. Our goal was to show her appreciation and as an added bonus to embarrass her. We asked for Cinderella's step-sisters and it was MAGICAL!!!! They exceeded our expectations. Will most definitely use it again for any other fun opportunities that pop up in the future.

The Magic was real.

My Grandmother recently went into hospice and we expect this to be her last birthday. The only thing she wanted for her birthday was to see all the family.

We had a huge party for Grandma and I came up with the idea of a singing telegram last minute but Britney was already booked during our party time so I was looking into other choices. The afternoon before the party though our venue cancelled due to covid issues and we were left scrambling to recover and I didn't have time to book anyone for my singing telegram. By late that evening we finally managed to book a new venue and get everything moved. In the shake up our party time had to be pushed a few hours that Britney hand mentioned an opening in her performance schedule and out of desperation I reached out expecting it was too late to make anything happen. To my great surprise Britney was more than happy to add us to to her schedule late in the evening and worked with me until after midnight to get the details worked out, paper work signed and everything handled for the next day.

The next morning Britney reached out to tell me what to expect and verify the schedule. I had requested Mary Poppins to show up in a grand entrance to present my Grandmother with some chocolates, sing "You are my sunshine", a song from Mary Poppins and then finish up with Happy Birthday. Britney called when she arrived so I could give her the gift for my Grandmother and then signal her when it was time for her entrance.

On cue Mary Poppins burst into the ballroom and just like the movie took command over the room. Britneys performance was absolutely brilliant, and gave Julie Andrews a run for her money. Mary Poppins greeted my Grandmother and actually crowned her Queen for the day. There was about 80 people in the audience and a couple dozen kids. Mary Poppins got everyone involved singing and dancing when suddenly the lights went out and Britney didn't break character even doing an awesome job keeping the younger kids calm joking about the lights until they were fixed. After several wonderful songs Mary Poppins stuck around to make sure that everyone got pictures with her.

Britney was so helpful getting everything schedule and worked out even when I was clueless what I was doing. I had checked out a few other performers and while it was chance and a lot luck that I ended up booking Brittney I wouldn't have change anything. Britney and YourPrincessParty.com was worth every penny and yet Marry Poppins and Brittney was $150 less than any of the others quotes I received.

Despite struggles with cross country communication, Brittany was amazingly kind. I wanted to send my best friend a singing telegram, from 3,000 miles away! Nothing that might scare his two small children, but playful, fun, and affordable. Brittany was very kind, patient, and really played the part of Snow White to the delight of everyone. It was absolutely fantastic and worth every penny.

My daughter said her telegram was “perfection “ funny, creative and Brittany was spontaneous and kept the group in stitches!!
Thanks so much for offering a way to say I’m thinking of you on your special day

Exactly what we were hoping for!

Brittany was an amazing entertainer! She played the part to the tee. The people we were surprising had so much fun. She was also incredibly flexible and changed the words to the song to make it more personal. Thanks Brittany!

So Wonderful! Worth every cent.

We used them to bring a smile to on of our business partners. We had her dress as Tinkerbell and give him a sword and hat, it was hilarious and definitely left a great impression! If you have anyone you want to recognize, encourage, or celebrate this is a wonderful way to do it!

Singing Telegram Utah did a fantastic job! She showed up right on time (despite providing the wrong address) and was very creative. Thanks for a fund event, my sister was completely surprised!

What a performance! She rocked. I will definitely call her again.

Best Way To Show You Care

Great to work with. Easy to book and customize a singing telegram. My wife loved it.

Mary Poppins came and sang to my husband as a Valentine's surprise. She was so adorable and funny!

Having Tinker Bell come to our party made the night! It was a birthday celebration that we will always remember!

My sister turned 58 this year and I wanted to something different for her. Cinderella showed up at her work and sang a beautiful song along with awarding her a crown and balloon animal. Everyone loved it and Cinderella was amazing!!!!

Thank you so much! It was definitely a magical day embarrassing your sister. You are both true princesses!