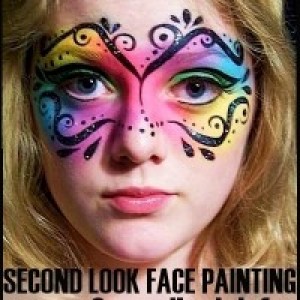 Second Look Face Painting provides the highest level of theme park style face painting artistry available! Trained by the company that provides world-class face painting entertainers to Disney, Universal, and Anheuser-Busch parks, artist Erin Penney honed her speed and skills painting thousands of theme park visitors. Her talents and original designs have been recognized with international awards and publication. With her team of artists, Erin provides expert face painting and temp tattoo services to turn special events of any size into a work of art! Satisfied customers include 3M, Princeton University, J&J, the American Cancer Society, the USO, and scores of families throughout the region.

We used Second Look Face Painting for my daughter's birthday party and the girls had a blast! They loved the designs and the glitter tattoos were fun too. The kids had such a good time that my older daughter requested Second Look for her party a month later. Erin is very professional and easy to work with, and does really beautiful work. I highly recommend! Thanks Erin for making their parties such a hit!

We hired Second Look Face Painting for our "I Do BBQ" as one of the activities for the kids to participate in and WOW! The compliments and rave reviews from the parents were awesome and refreshing to hear. Erin was simply amazing and super professional, as well as friendly and caring to all that stopped by to have their face painted. The kids loved going to see her!

Thanks for helping to make our special day so unique!

Thank you so much for your kind words, Kim! I appreciate your generosity and for making Second Look Face Painting a part of the Big Fun at your amazing “I Do BBQ!” I hope to join you and your family in celebrating future special events. Thanks again!

The work was good, however the aftermath was unprofessional

Erin worked at my daughters first birthday. We gave her a deposit check and when she was done a final check. About 9 months later she emails me to say that she found the final check, crumbled up in her glove compartment and when she tried to cash it , it said the check was too old to deposit. She wanted a new check immediately. I emailed her back and explained I had just given birth to my second, I'm not working and this email is catching me off guard cause I assumed shed cash the check 9 months ago. I'm a teacher and explained to,her that I will,not be back to work,till September because I'm on maternity leave. She never responded. She sent me a letter 3 weeks later claiming the party was to "celebrate the opening of my pool in Marlboro, also my daughters first birthday" trying to make us sound pretentious and she cc'd her attorney. She threatened to take me to small claims if I didn't give her a replacement check immediately. I emailed her back saying I haven't received disability this is a unexpected expense. I even screenshot my account that said -40... She didn't even congratulate me on the baby nor say maybe "no worries I understand can you have the funds by September?" She showed no compassion, she just wanted her money. Meanwhile, we paid her 9 months ago and it was her fault she lost, then found the check.when I called her to ask if we can have an understanding because I needed sometime (I was 5 weeks post partum and recovering from an infected c section in which they had to reopen) she said no, "just like your in a situation, I am too and I need the money that's a weeks worth of groceries!" At no point did she show any sympathy or human compassion. This was her fault and she wanted her money now. I would never hire her again. If you do hire her, make sure to follow up that she cashes your check. She clearly is irresponsible and selfish.

Erin paints so beautifully and so efficiently. Kids had such a great time. She's definitely as close to Disney face painting as you can get!! Thanks Erin!

Wonderful for kids and adults :)

Second Look Face painting was an absolutely delight to work with, stress free and they accommodated to my party wonderfully! The kids had an absolutely wonderful time and were too excited to have their faces painted and of course their pictures taken :) thank you I would use you over and over and recommend you to everyone I know!

family friendly and grea time by all!

Second Look Face Painting made our family gather a huge success. Erin is talented, professional and kept everyone happy and in good spirits. Her designs are creative and colorful and tailor made. Would definitely use her services again!

Erin and her team are fabulous!

I used Second Look Face Painting last year for my twins 1st Birthday party and this year for their party as well. Last year we had Erin and this year we had one of her team artists Tess. Both were absolutely fabulous. Not only was their work spectacular, but they wer professional, courteous and friendly! A real pleaseure to work with them. I will certainly use them for future events! Highly recommended!

Erin did an amazing job at my daughters 3rd birthday party! She was punctual, creative and all the guests even the adults had a blast with her. I would highly recommend Erin and would most definitely use her in the future.

I have hired Second Look Face Painting for 2 events to date, and her work is amazing! She takes her time and listens to what the children would like and, never fail, it is exactly what they wanted. Great job. We will continue to use Erin and her company in the future.

Erin recently did my daughters 3rd birthday and from the moment I contacted her amongst the many others I just knew she was the one! Her helping me figure out which package to the no pressure attitde just made me feel comfortable with her. She did amazing artwork from face painting, glitter tattoes & henna due to the ages ranging from 2-45. We all had a blast with Erin and I'd highly recommend her and defiantly use her again in the future.

My daughter had a jungle safari themed 1st birthday party. Erin was punctual and patient and worked well with the little ones. Even my tiniest guest ages 0 to 1 were able to get cute little painted art on there hand, arm, or ankle. The older children ages 4-10 enjoyed cool animal, pirate, and butterfly face designs. Erin was even nice enough to create some cool cheatah and zebra eye designs for my mother and mother in law and cool baseball team logoa ect for the older boys all of which were not chosen from her selection. She worked very quickly but was still neat and proffessional. I would definately book again for next year!

After I saw the website for Second Look Face Painting, that was the only company I wanted to call! I knew right away who I wanted to entertain at my party. Erin's face painting is head and shoulders beyond the competition. In our initial contact, I found her quick to respond, flexible, resonably priced, very thorough, quite organized and professional with a well though out plan for our event! She is so creative and talented. Everyone is still talking about her designs. The designs are intricate and detailed. She is a true artist.

Erin is amazing... Second Look did a great job for my daughters 1st birthday... All the kids and adults loved the face paint and tattoes... I think evey kid got one and most adults did too!! She does real good work and is very easy to wrok with. Thanks!!

Made our party a "hit"

Erin's work spoke for itself on each of the children's faces at our party. Working with little ones can be a challenge but Erin handled them with ease. It was a fun day for all and my little lion looked adorable!

Just want to say a quick thank you for your efforts this past Saturday. A good time was had by all. The face painting was a big part of the day, so appreciate your creativity and patience with the kids--you are a gifted artist and really great person. Thanks for making my daughter's birthday so special.

Pat H. said “Beautiful work and Arva was great to work with!”

Grace C. said “Dot is a super star clown!! Great personality and knows her fun stuff!!! This is our second time for fun with Dot and she again brought smiles and laughter-…”

Lauren F. said “George not only dazzled the 3 year olds and my daughter's birthday party, but all the adults thought it was amazing! Soooooo worth it. And even though…” 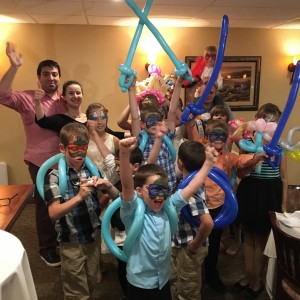