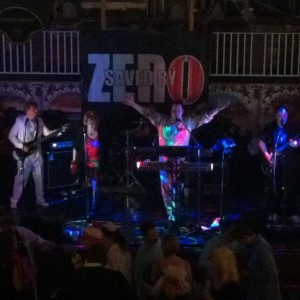 Saved By Zero is an all-80's tribute band specializing in danceable rock, pop, new wave straight from the Age of Excess! Some of the artists that we cover include, but are not limited to: The Cars, Cyndi Lauper, Simple Minds, Joan Jett, The B52's, Duran Duran, Pat Benatar, Devo, The Cure, Animotion, Bananarama and more! We provide a quality PA system and lights, 80's trivia and humor, as well as period clothing and costumes to provide the best experience to crowds for every type of event from bars to weddings, theme parties to reunions, corporate events to bar mitzahs! Come party like it's 1985 and relive the TOTALLY AWESOME 80'S!!

Be the first to review Saved By Zero: The 80's Tribute Band

Great sound, dazzling light show, songs performed very close to the originals including electronic drums (where necessary), sequences, and samples, 2-3-4 part harmonies, 80's attire on each member of the band for that authentic 80's look, audience participation (singing, playing the tamborine, etc), 80's trivia and prize giveaways (80's memorabilia), and LOTS of opportunities for dancing and singing along! A full PA system will accomodate crowds from 20-2000 people....indoors or outside!

Saved By Zero formed in October 2010 as an outlet for keyboardist/vocalist Matthew Mann and bassist/vocalist Dan Davidson to play some silly 80's songs in their garage and just have fun.

2011 saw numerous musicians come and go, but Saved By Zero ended up playing several "test" shows around the Memphis area to critical acclaim.

2012 brought more personnel changes, but the most recent lineup includes Matthew Mann on keyboards/lead & backing vocals/harmonica/noises, Tim Grover on guitar/vocals, Darlene Sexton on vocals, Chris Geswein on bass/vocals, and Dave Royce on drums/percussion. Each member of the current lineup brings years of experience playing the 80's as each member has previously been associated with various 80's tribute bands including The Venus Mission, The Breakfast Club, The Five That Framed OJ, and Cherry Bomb. They also bring a dedicated live sound engineer who can ensure the sound is "just right" for every show.

SB0's dedication to high-energy, danceable, 80's music ensures a great time for each and every crowd they perform for. The new year promises more music, more humor, more fun, and a much larger base of "Retro" fans who can't wait for the next show. The 80's Revival is in full swing and Saved By Zero: The 80's Tribute Band is there to ensure that everyone in Memphis and beyond can experience the revival the way it was meant to be...TOTALLY AWESOME!!!

This is essentially a 6 piece band (we have a dedicated sound engineer). So we need enough space for the 5 musicians and the engineer. We also need outlets on 2 different circuits (if possible) so we can run power amps on one and the instruments and such on the other.