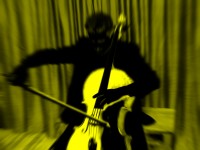 Professional freelancing cellist in Toronto. My name is Sam. I'm a professional freelance cellist working in and around Toronto. I have worked in a large array of musical styles, both as a cellist and a composer/ arranger. I have worked with and recorded for a large number of bands and film scores. For more information about me or to listen to some samples of my work . Please contact me for bookings. Thank you for your interest!

Be the first to review Samuel Bisson

Samuel Bisson is a Toronto based cellist who recently completed a Master’s degree at the University of Toronto under the direction of Roman Borys. He has previously studied with Julian Armour and Paul Marleyn at the University of Ottawa, where he earned his Bachelor’s degree. He has had the pleasure to play for many renowned cellists and chamber musicians including Janos Starker, Hans Jorgen Jensen, Paul Katz, the St-Lawrence String Quartet, Mark Fewer, and Angela Hewitt.

Samuel performs frequently as a soloist, chamber musician and orchestral player. He has performed with renowned Canadian piano trio, the Gryphon Trio and performs regularly as part of the Passport Duo with pianist, Nadia Boucher. Samuel currently holds the position of principal cellist with both the Kindred Spirits Orchestra in Markham, Ontario and the Sneak Peek Orchestra in Toronto. He has also appeared as principal and section cellist with Orchestre de la Francophonie Canadienne and the Ottawa Symphony Orchestra and has played under the direction of Timothy Vernon, Pinchas Zukerman and Jean-Philippe Tremblay.

Samuel has performed and participated in festivals across Canada including the National Arts Centre Young Artist Program, Scotia Festival of Music, and the Toronto Summer Music Academy and Festival. He has also been a guest of the Toronto Arts and Letters Club, and the Midday Music with Shigeru concert series in Barrie, ON. Samuel has also been the recipient of many awards over the years as a solo performer as well as with chamber groups and as a composer.

Samuel has a special interest in new and unknown music and has an ease with a broad range of musical styles. He regularly performs premieres of new works and has been a guest of Toronto’s New Music Festival for two years. Beyond cello performance, Samuel is a composer and has had many works performed by ensembles across the country and recently completed scoring music for a short film for the National Film Board of Canada.