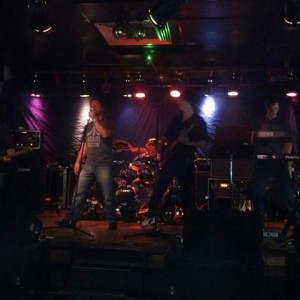 We are RETROBUTION, a five-piece band from Dayton, Ohio committed to bringing you all the best music from the 80's when MTV actually played music! No Gimmicks. No Costumes. Just great music the way you remember it. We have designed this band around the idea of performing 80's music for parties, conventions, dance clubs, outdoor events. We perform mostly pop material that was on MTV from 1980 - 1989, We are not a "Hair Metal" band and we run a clean show so if you are looking for a band that will bring an upbeat, fun, performance? we are the alternative and you have come to the right place.

Be the first to review Retrobution

All the sounds of the 80's a wide variety of music of the era, fun colorful lighting. 80's trivia.

Andy is a seasoned veteran of the Dayton Band scene, fronting rock bands like Case In Point and Crossfire. His love for the 80's has led him to form the band Retrobution, formerly known as Duophonix. Now playing his favorite tunes, Andy is a passionate performer who loves to interact with the crowd. Watch out, he might have you join him on the stage for a song or two!

Playing rock music for many years, Kevin enjoys a wide variety of music from classic country to modern metal with major influences from bands such as Aerosmith, The Beatles, Led Zeppelin through the 80’s and 90’s major chart toppers to modern artists.

Basic approach to music is “If it feels good ....play it.”

Chuck has been playing music for over 25 years in bands such as Sterodose, Bullet Butterfly, and Voodoo. He enjoys many styles of music from jazz to metal. Chuck says "Playing 80's pop MTV hits will give music goers an alternative to bands that play the same old tired songs." With years of experience and professional equipment, Chuck will deliver the low end.

Dave has been playing drums for over 25 years. Dave enjoys most music types as long as there are drums in it. He has a long history of playing Rock-n-Roll and Country and jumped at the chance to play 80's music all over again. He grew up in the 80's when this music was new and it is still fresh in his mind. Dave enjoys coaching his two sons' sports and being a stay at home dad when he is not working at the Fire Department. He and his wife Michelle are HUGE Buckeyes fans, so do not mention Michigan around them!!

Born in 1980, Eric is a true 80's child. He grew up being surrounded by the unavoidable sounds of the 80's, which later played a major role for inspiration and nostalgia. He first picked up the guitar at the age of 13 and shortly after started learning bass and drums. With the aforementioned inspirations, he developed an affinity for 80's synthesizer sounds and decided to experiment with keyboards. Following years of musical exploration, he discovered and decided to learn the Chapman stick. His major influences include, but are not limited to, Frank Zappa, King Crimson, Talking Heads, Devo, Faith No More, Mr. Bungle, and The Tubes.