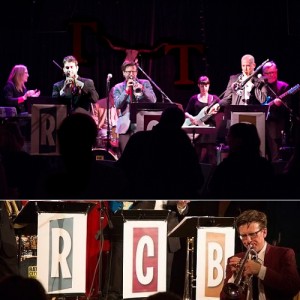 Be the first to review Rat City Brass

From an art gallery opening or a madcap country party to a high society auction, RCB has the chops and dynamics to complement just about any event or party. Well suited as any combination of background mood-setter or featured entertainment.

When they formed in late 2009, Seattle-based Rat City Brass largely paid homage to classic pop composers like Herb Alpert, Burt Bacharach, Henry Mancini, John Barry and Ennio Morricone. Within months, they added their own big-beat originals and new arrangements of songs by artists like The Turtles, Al Hirt, The Beatles and Dean Martin.

Suddenly it’s on – and the cool kids get it.

RCB plays the best rooms throughout the Pacific Northwest, and has been featured live on Seattle’s KEXP 90.3 FM.

With top-notch musicianship, soaring melodies, dance-able rhythms and a fun breezy stage presence, RCB is what brass sounds like in the 2010s.

So if you’re looking for a band that’s guaranteed to please everyone from your hippest friends and co-workers to your stuffiest relatives or senior staff, why not the best?

AC power and space for 7 players.