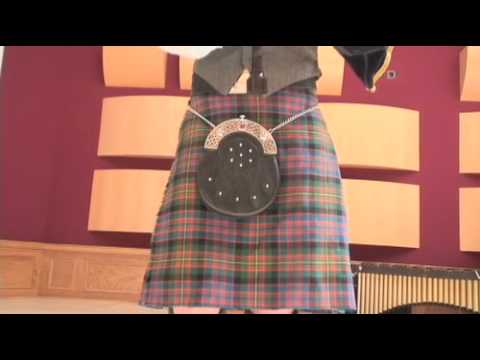 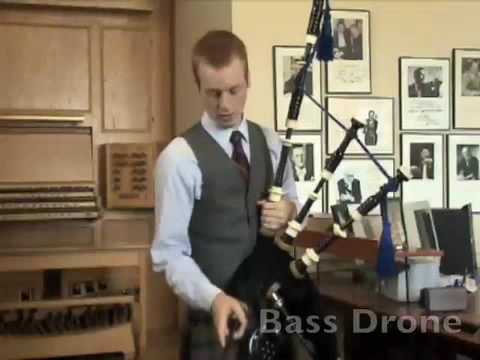 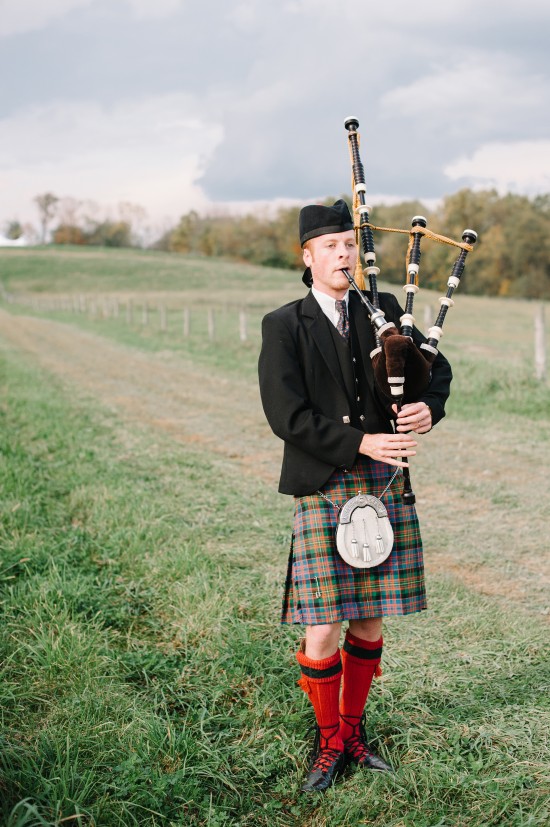 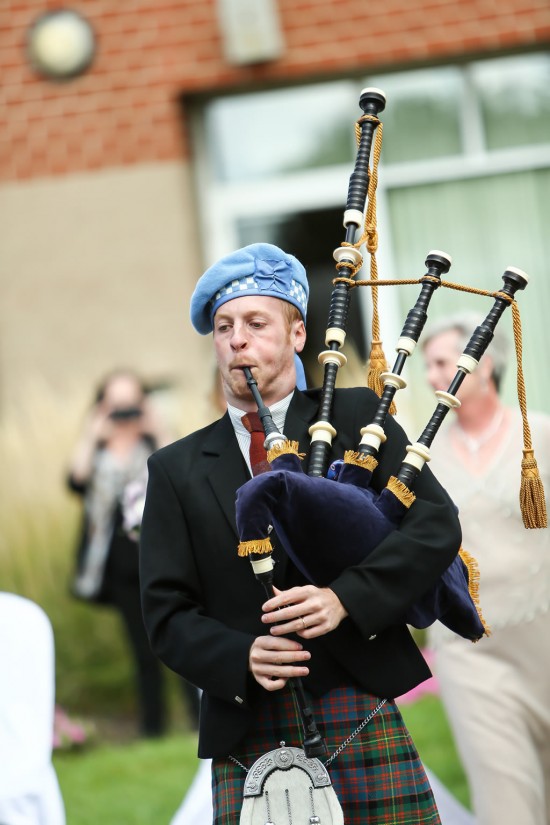 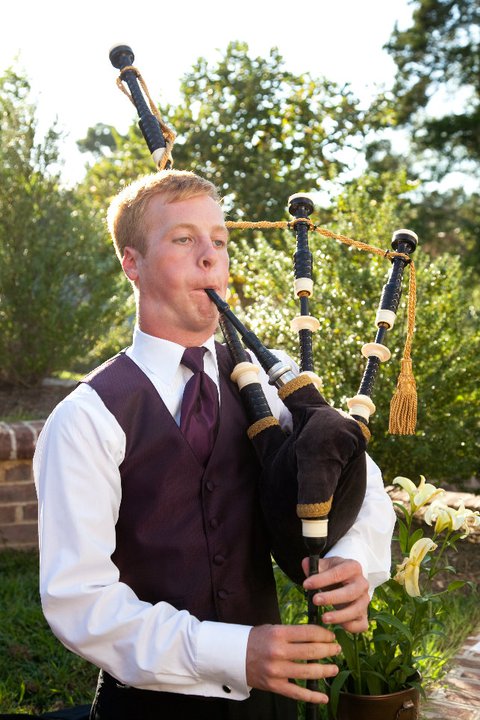 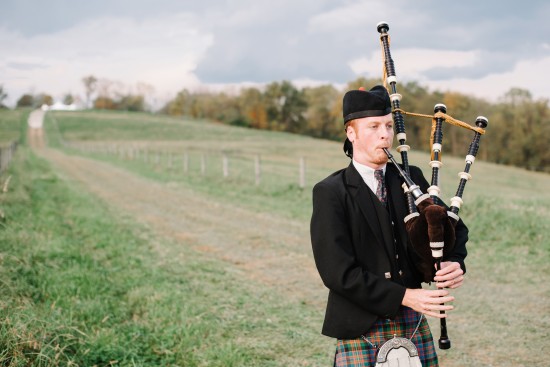 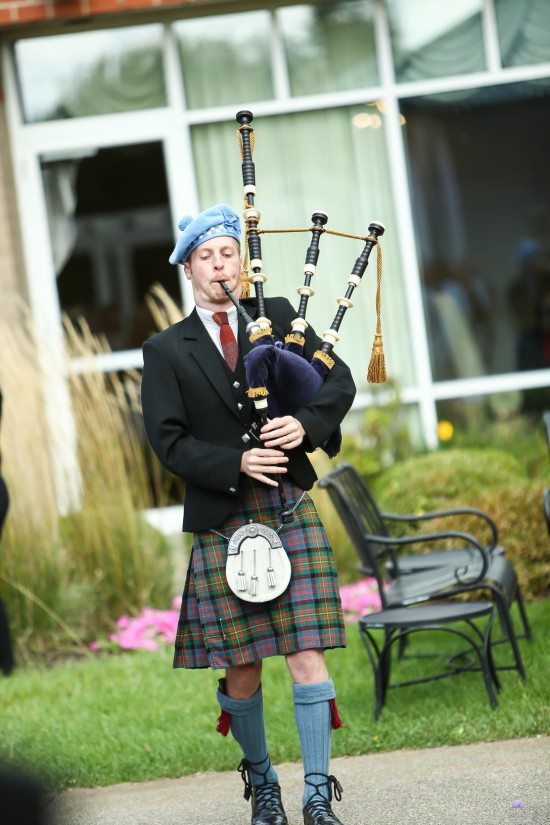 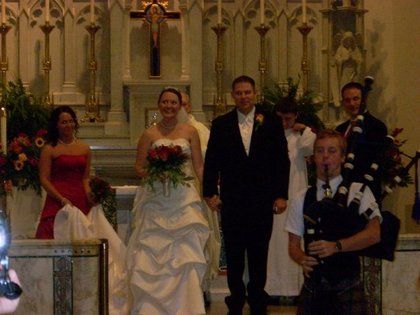 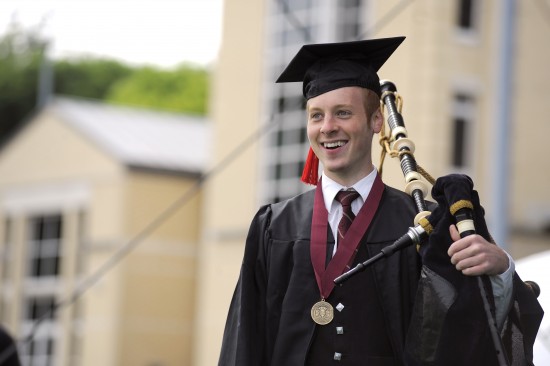 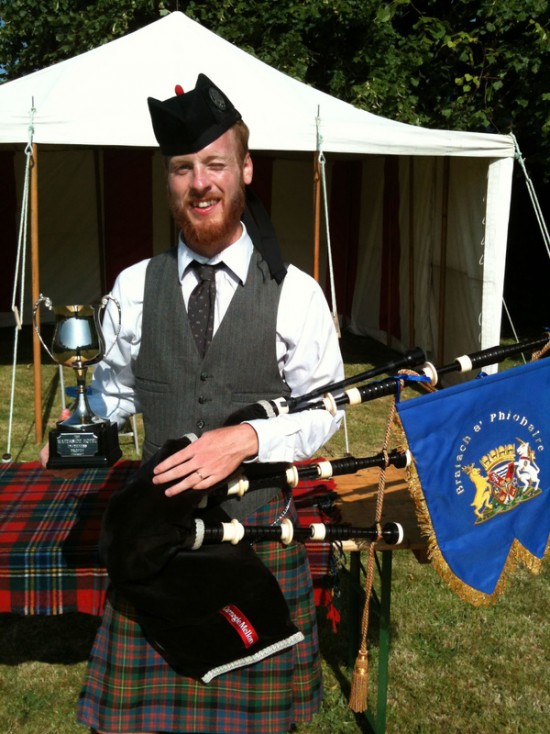 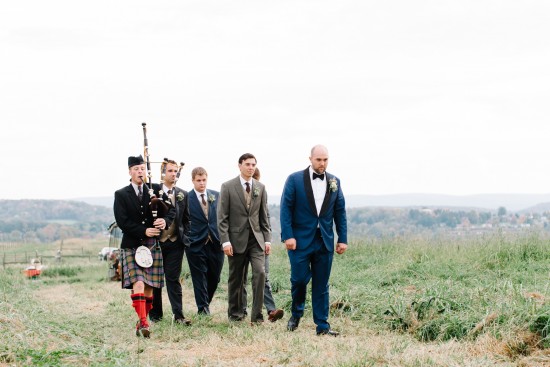 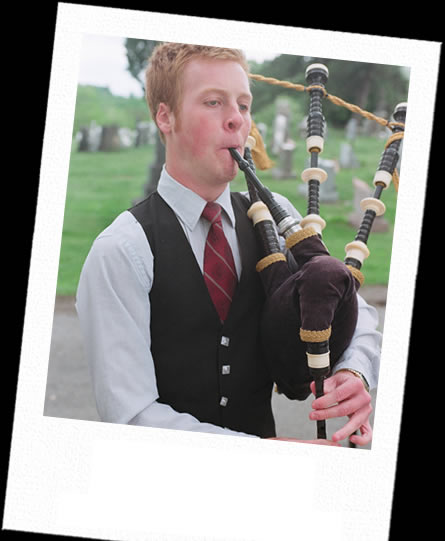 Nicholas Hudson is a professional, conservatory-trained bagpipe musician based in the Pittsburgh area. He is the third ever graduate of the Bagpipe Performance degree at Carnegie Mellon University. An experienced performer, Nick is well versed in both traditional and contemporary piping and, as a Professional grade piper, has won many prizes in solo competition. He also holds the Graduate Certificate from the Institute of Piping, the highest certification possible for bagpipe performance. Nick has been featured on the front page of the Wall Street Journal and nationwide appearances on The Today Show and CBS Evening News.

Nicholas was prompt and performed professionally. He was very patient to wait for our event to start which was later than we had expected. When he did, he performed well.

Nicholas was easy to work with, great with communication, arrived on time, and made it a lovely service. Very talented musician.

Nicholas Hudson is a fantastic bagpiper. I could not have made any better choice for my mother's service. He was very prompt, personable and fit my need very well. I would definitely choose Nicholas again if ever the need arises. He played as people arrived for the service and then performed the chorus of In the Garden and Amazing Grace, songs that I had requested. Thank you so much Nicholas, you were truly a blessing to have.

Nick drove a long distance on windy country roads to come to a cemetery in the middle of West Virginia to honor my Scottish grandfather during his burial service. It was cold and pouring rain, but Nick stood in the rain and played hymns which provided comfort to everyone there. He was very responsive throughout the whole process. He made himself readily available despite the last minute, unexpected nature of the event. He arrived prior to the hearse and played many different hymns, including Amazing Grace to conclude the service. Everyone present remarked on what an amazing experience it was to have Nick there at the burial. I think it gave everyone comfort. Don't hesitate to hire Nick if you find yourself in a similar situation as me, arranging a last-minute funeral service for a Scottish loved one.

Mr. Hudson played at our dad's funeral in September 2014. Nicholas traveled 100 miles and was ready and waiting for us as the cortege approached the grave site. It was very important to our family to have our dad's Scottish heritage honored, and the bagpipe music was so fitting - it was comforting and also uplifting to everyone at the memorial. Mr. Hudson was the consummate professional - we are grateful that we found him. Thank you!

We can't thank Nick enough for the beautiful job he did at my Mom's funeral. He arrived early, was already piping when the family arrived and his music was poignant and flawlessly performed. What an incredible talent!
Sincerely,
Perry Foster

Nick Hudson played at my mother in law's funeral mass and graveside. He played all the tunes that were requested, beautifully. At the cemetery, the temperature was sub-zero and Nick played throughout the entire proceeding and his pipes sounded amazing despite the frigid temperature. His professionalism and dedication to piping is very apparent. We cannot thank him enough for fulfilling my mother in law's request for a bagpiper at her funeral. Thank you Nick.

Nick, traveled to Medina, Ohio from Pittsburgh to play at my daughters wedding, he was absolutely wonderful. The temperature was 91* that day and Nick was the consummate professional thru it all. I cannot express enough how thrilled the audience of 200 was thru the entire bag pipe ceremony.
Thank again Nick great job !!!
George & Nadine

Nick was a part of our community's Light the Night event - he marched/played in our parade down our main street and then was stationed at one of our events that evening. He was fabulous and really added to the evenings festitivities - we will certainly have him back again next year.

I didn't get to hear him play as much as I would of liked, being the bride, you're left out of a lot of the guests experiences. Though what I did hear, I loved. He made our day very special. Nicholas, piped the wedding party in, and escorted my father and I down the isle. He played the whistle for us during the ceremony and brought tears to my eyes. As well as many many others. I spoke with and researched many other pipers in Pittsburgh before booking Nicholas, and I am so glad I settled on him. Very professional, accommodating and talented. I may hire him to just come play for us so I can hear more. Love, love LOVED him!

Excellent support for kids in community

We hired Nicholas Hudson for our Internationsl Food Festival at our elementary school. He provided great music, information, and interaction for our young guests and their families!

Nick was outstanding and very accommodating considering that we provided him only a rough outline of our rather informal wedding ceremony, cocktail hour and reception; and we had no rehearsal. We asked him to 'wing it' and he did an excellent job. I highly recommend his services and wish Nick the best of luck with his various competitions. I expect great things from this young piper.

I hired Nick to play before the mass and before and after the chapel device at the cemetery. He was excellent and very professional. Dressed in full kilt attire on a chilly November day.

Perfect Special Touch to Our Wedding

Nick performed at our wedding on September 13, 2013 and I am so glad that I decided to hire him. He was extremely easy to work with, incredibly talented, reasonably priced and of course, very adorable. He performed for the ceremony and during cocktail hour. Our guests are still talking about him playing Metallica and other metal songs on the bagpipe (we had a metalhead themed wedding) and I didn't even have to request that. Thank you so much Nick!

Nick was very professional and an excellent piper. I don't think I could have asked for anything more.

We are so glad that Mr. Hudson was available to play for our wedding. From the start he was professional and accommodating. His presence added a powerfully moving dimension to our celebration and we cannot thank him enough! Splendid!!! Debbie (Podolski Barlow) and Steve Breiding

Nick was a pleasure to have play for our graveside memorial service. His performance was wondeful and very much enjoyed by all in attendance. he played a good selection of songs and requests. He is an outstanding piper, communicates well, and a very pleasant person to work with.

Nick was well loved by all at our picnic, played well and interacted comfortably with all. He was professional, while being very accommodating.

Nicholas added just the right touch to our event. Professional and wonderful to work with.

Weddings:
I can play during any part of your wedding that you would like. I understand that I am being hired to add something special to a very important day in your life, so I will come to rehearsals to make sure that everything is to your liking. The price will vary depending on how much you want me to play. I have a large repertoire of appropriate music for the occasion and can also compose a piece of music for the occasion if you would like. Contact me and we can discuss the details and any requests or concerns you may have.

Funerals:
I am available to play during the ceremony/mass and/or at graveside. I can play many popular hymns, such as Amazing Grace, Be Still My Soul, and many other Scottish/Irish airs and laments. Because of the urgency of the situation, I can be lenient in regard to my prices. If it is a child who has died, I will play for no charge.

Other Events:
I am available to play for any imaginable event. Bagpipes add a very special and memorable touch to any event. I have performed at all types of parties. From retirements, to birthday parties (I can play The Happy Birthday Song), to anniversaries, to holiday parties (for which I can play many Christmas songs), to sporting events, or any other imaginable event; I can do it all. I also put on concerts and recitals upon request. I can easily play for an hour and a half if necessary. Pricing varies according to the time involved.

In addition to highland piping, Nicholas Hudson is an active performer of border/smallpipes and whistles with various ensembles. He has competed multiple times at the Grade 1 World Pipe Band Championships in Glasgow, and has also competed successfully in France, placing third in the national championship. In addition to his performance degree he also was in the Music Education Certification program at Carnegie Mellon. He currently teaches several pipe bands of various grades in the Pittsburgh area as well as maintaining a private studio.

He is an active competitor in the Eastern United States Pipe Band Association, competing at the highest level, Professional. Some solo competition highlights include the overall prize at the United States Piping Foundation in the amateur ranks, prize being free airfare and two-weeks tuition in Scotland, and, the Boreraig Trophy for Open Piobaireachd in 2012. He has been chosen as the representative for the United States for two consecutive years (2011, 12) at the prestigious MacCrimmon competition at France's Festival Interceltique de Lorient.

Other performance highlights include playing concerts with such celebrated acts as the Grammy-winning Chieftains, award-winning Bonnie Rideout, Grammy-nominated John Doyle and Jerry O’Sullivan. Nick has also performed for famous dignitaries such as in the White House for President Obama and Mrs. Obama, the current Prime Minister of Ireland, and the Maharishi Mahesh Yogi, and has performed on field for three NFL games, as well as three performances competing in the World Pipe Band Championships in Scotland as well as France at the highest possible level.

Nick has been featured on the front page of the Wall Street Journal and nationwide appearances on NBC (The Today Show) and CBS (Evening News).

While completing his Music Performance degree at Carnegie Mellon University, Nick studied extensively with the late Alasdair Gillies and Jimmy McIntosh, widely regarded as two of the greatest Scottish pipers to emigrate to the United States. In addition to taking piping lessons at university, he took classes typical of any conservatory music student on a university campus--Music Theory, Solfege, Eurhythmics, as well as performing a full spectrum of classical repertoire at various concert and recital halls with the Repertory Chorus under the direction of the Grammy-winning Dr. Robert Page. After graduation Nick has traveled every summer for extensive study in Scotland, with Chris Armstrong, Willie Morrison and Roddy MacLeod at the National Piping Centre and the College of Piping.