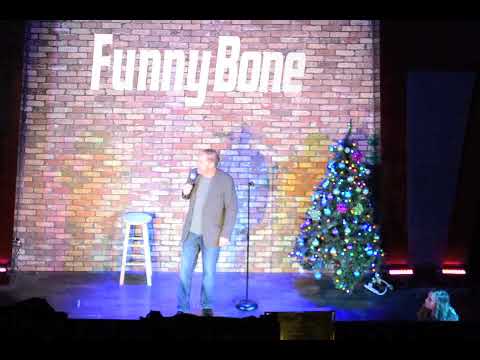 Seen on The Tonight Show with Jay Leno, HBO, Showtime, Funny or Die and a favorite at comedy clubs and private events across the country. Mike caters his act to each audience, writing special material for companies and guests of honor, and is able to work squeaky clean, late night blue, or anywhere in between.

Let me start off by saying I was very skeptical and nervous about booking a comedian online without having any prior knowledge of even knowing how to actually book an entertainer as such. Mike Larsen arrived on time, was very prompt and polite and put on an amazing show! Our guys loved him! His jokes were timeless and relatable. If you are looking for mature jokes, and funny family stories then Mike is your guy! I would most definitely book him again!

Quallity, comedy kickoff for our Club

Mike did a splendid show for our women's club with local humor and personal touches added in. I was laughing most of the time as I tried to watch other club members focused on him and enjoying his performance. He is spontaneous, casual and informal as if talking to a neighbor.

Great Time Had By All!

Very entertaining with a wide variety in his performance.

I booked Mike for an event for an apartment community we manage. He performed at PG-13 comedy show for everyone and they loved it! He's professional, very prompt with communication and yet hilarious. I will absolutely use him again and highly recommend him to others. Thanks again, Mike!

I enjoy customizing my show for any group or event. Tell me about your company, charity or guest of honor and I'll create new material for and about them.

Feel free to challenge me with something new.

Mike Larsen is a veteran comic with appearances on HBO, Showtime, Funny or Die, and multiple performances on The Tonight Show with Jay Leno. He’s also an Emmy nominated comedy writer for shows like The Drew Carey Show, Ellen, Reba, Two Guys & a Girl, Real Time with Bill Maher, and many others.

Mike’s career straddles the worlds of comedy and current events, serving as a speechwriter and debate coach for national politicians and mentoring inmate writers at California’s notorious San Quentin Prison. The LA Weekly said, “Larsen’s act is smart, timely, and easy-going, like a conversation between good friends.”

Mike recently bought a ranch outside Columbus, Ohio and splits his time between there and his longtime home in Los Angeles.