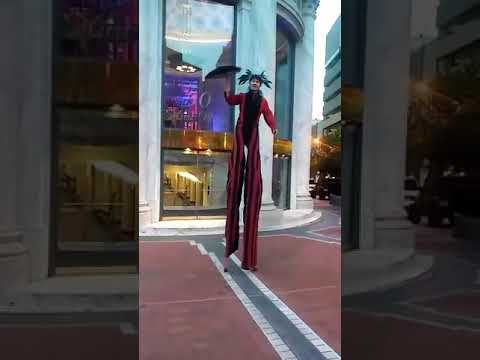 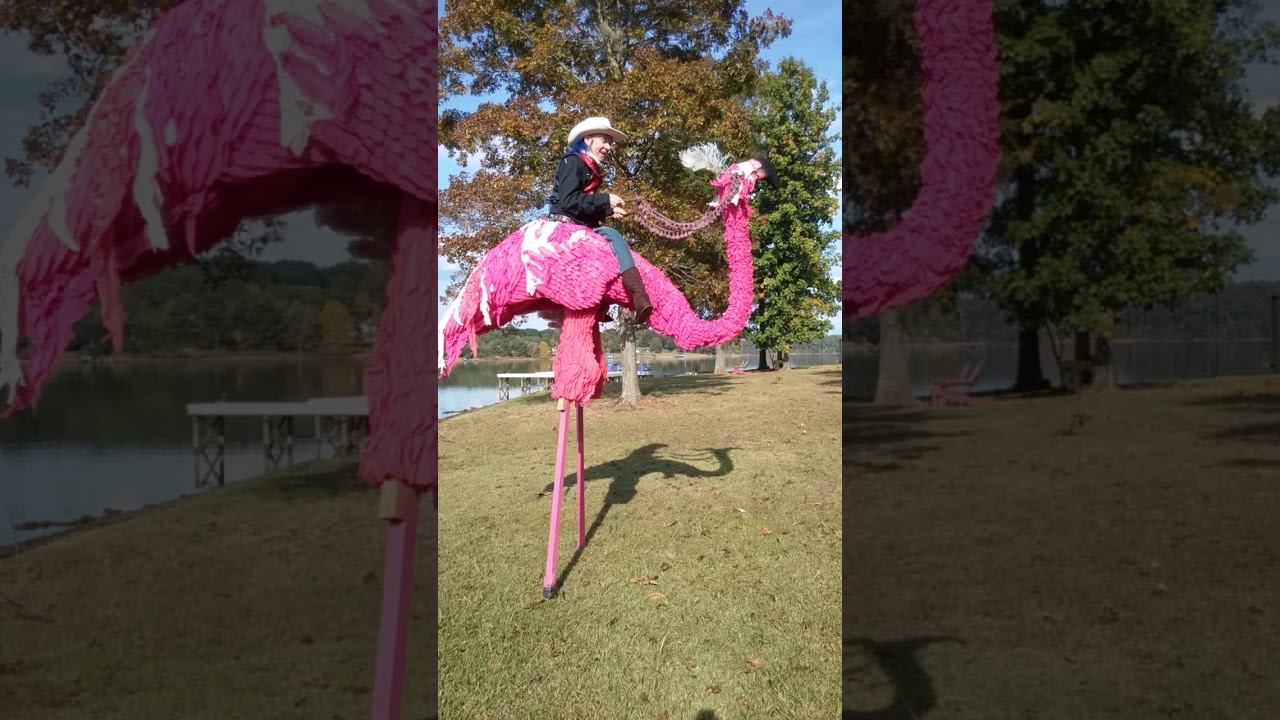 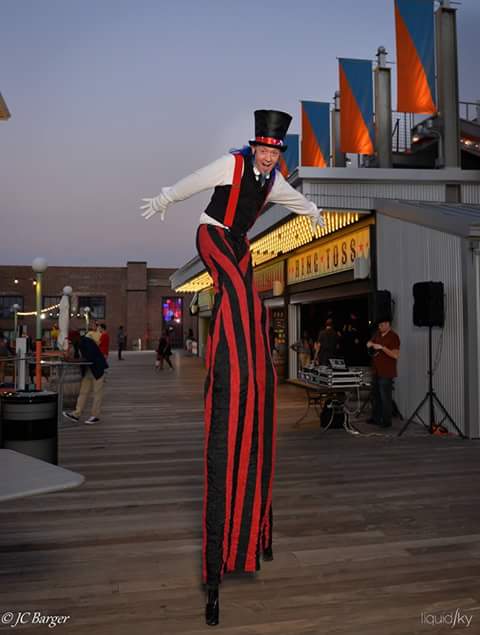 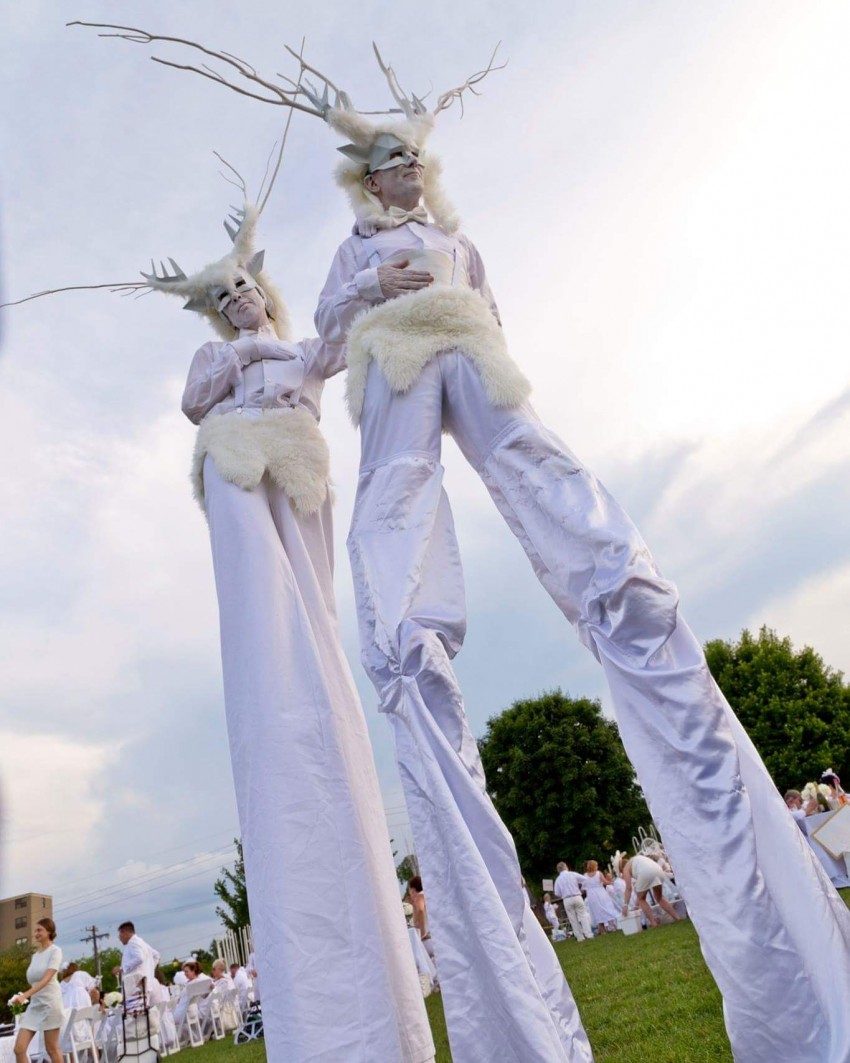 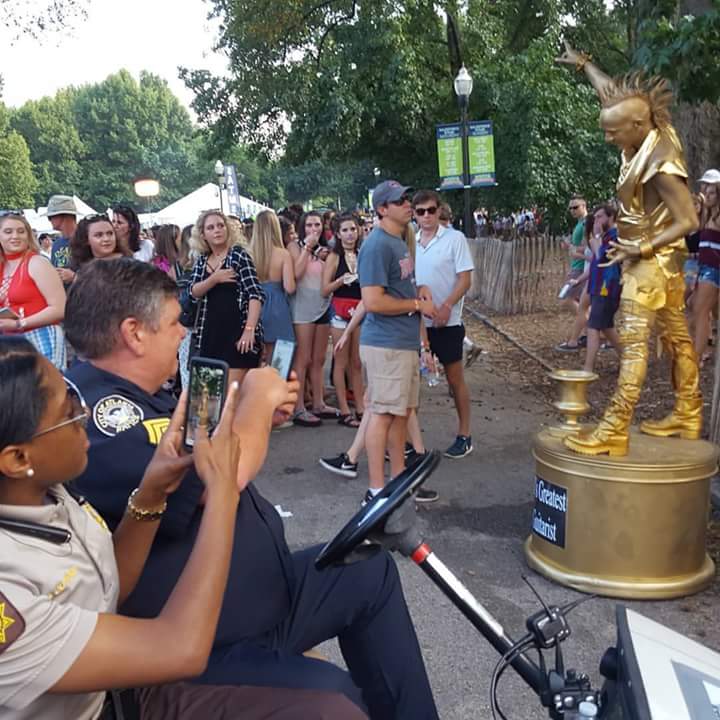 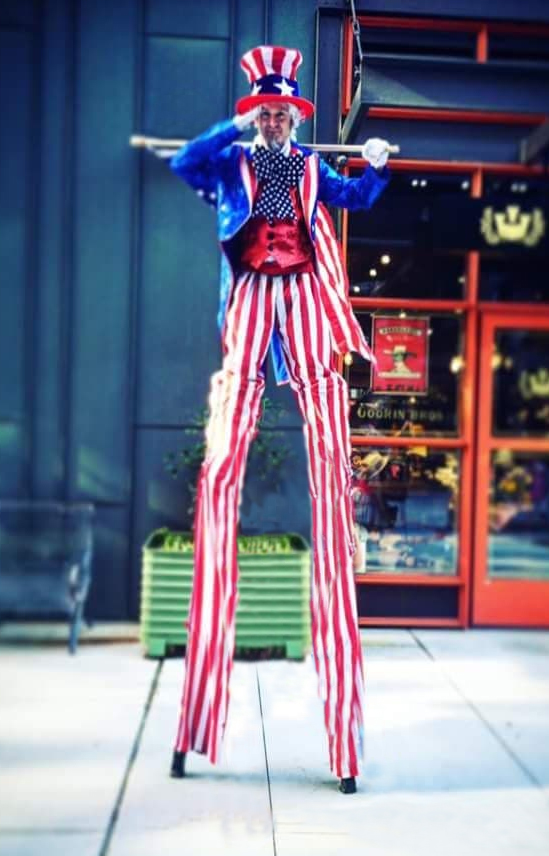 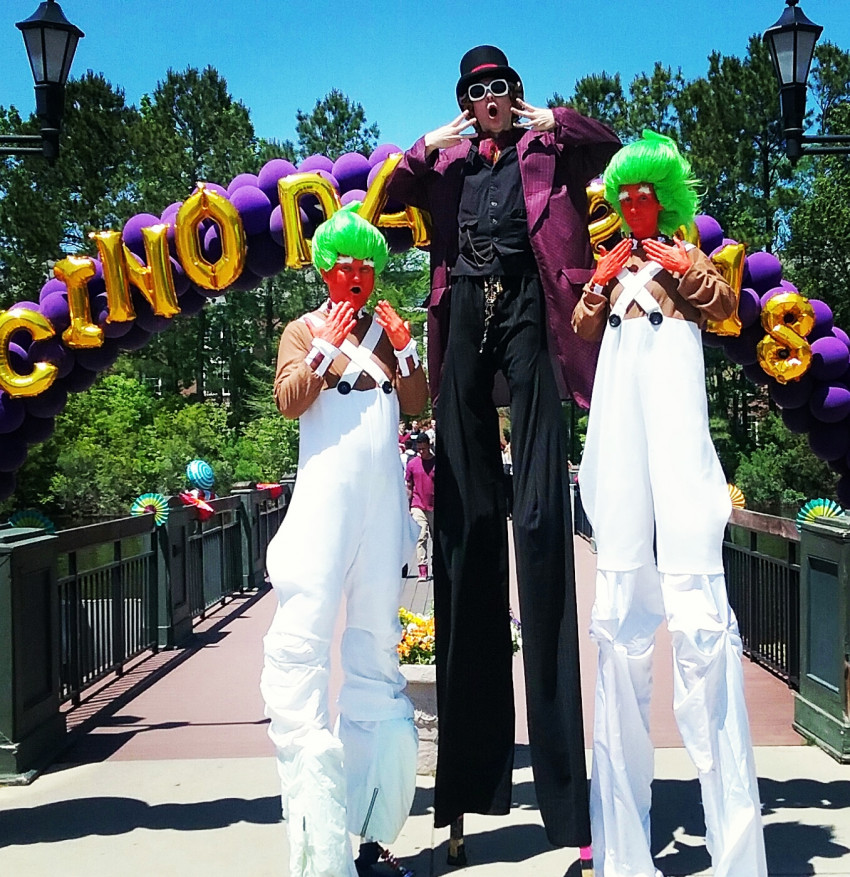 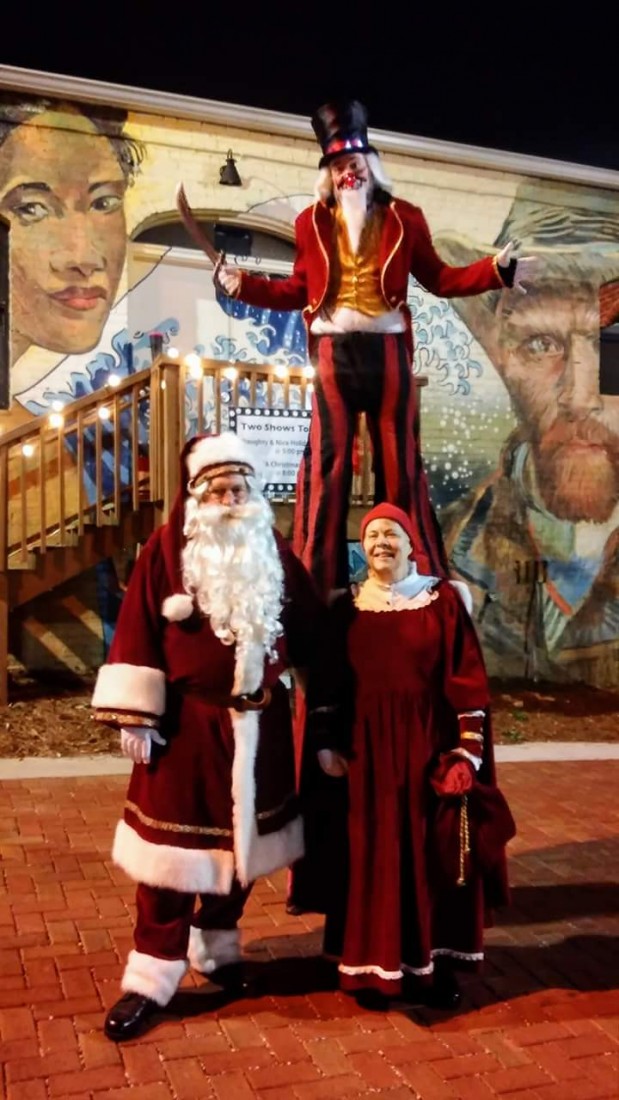 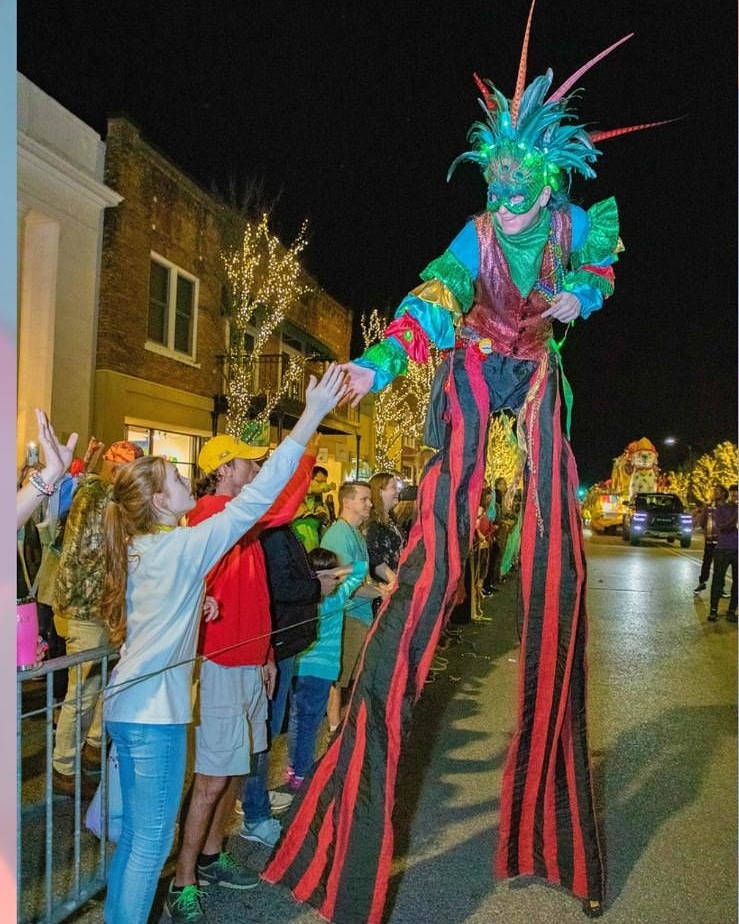 Now fully insured!! Morgan Bivens is one of the tallest in the world, standing 12-feet tall!! His specialty is circus-style stilts, balancing on small pegs the entire time! He has other stilts with adjustable heights making him versatile for indoor or outdoor events. His costumes are custom made, high quality, unique and he has several to choose from. Featured in various news articles, he has gained notoriety for his talent of dancing while stilting. He has been a featured performer in several movies and television including, Goosebumps, Hap and Leonard, Project Almanac and Hail Mary. He has successfully performed at over 200 functions! Travel fee over 70 miles from Atlanta.

Morgan was great! He even bought an outfit to match our theme. The crowd loved him!

Morgan was the center of attention, exciting and fun for our guests!

Thank you! You guys have great music and energy! Was fun!

Morgan added a special touch to our Mardi Gras event. He is a great performer.

That was a fun event, great location and the guests seemed to really get into it! Thank you!

He is the best!

Greg was a stilt walker to support my political campaign. He is on time, works hard, has an awesome attitude and people love him. Can't recommend Greg enough!

Thank you Sean! Enjoyed walking around with you! Good luck with campaign!

The stilt walking was fantastic!

He was great for my outdoor Christmas themed event. People of all ages loved it and I would use him again.

Morgan was an absolute treat to work with! All the kids loved his balloon animals and he was so patient and kind with the 50+ attendees! Would hire him again in a second! A carnival without Morgan would not be the same!

Thanks so much!! What a great party! Very creative, bet your daughter loved it!

Morgan was a crowd pleaser to all ages. He is prompt and communicates well right up to the event and during. We have already booked him a year in advance. He is amazing to the crowd and they loved him. No festival should go with out Morgan Bivens the Stilt walker!!!!!!!!!!

It was a pleasure working with Morgan. He created a 9ft Goliath stilt outfit and was a great part of our sermon illustration at Faith Christian Center. Thanks again Morgan!

The costume was a real challenge! Really enjoyed the whole experience! Thank you Kerrick, that was a great idea!

Expect the audience to watch in awe as he moves through the crowd, interacting with each and every one of them as one of the tallest stilt walkers in the world!! Great for photo op keepsakes and straight to Facebook and other social media. Music playing? Awesome! He'll dance along, pumping up the crowd and has been a huge hit at music festivals. Parades? No big deal. Hills, rough terrain, slow or quick moving, long or short...he is able to do it all! Crowds and tight spaces? He's succeeded at every challenge thrown at him. Kids? They love him and he often has an entourage of small fans. He also has another talent which is spinning things while stilting.

He began on drywall stilts in 2003. The next year he was helping engineer and build large complex stilt costumes for the Ringling Bros Circus. In the fall of 2012, he built a pair of circus-style stilts that pushed the limits of his height. He stands 12-feet tall, dances, maneuvers through crowds with relative ease, and has astounded people by being able to walk on rough terrain, up and down stairs, and in high wind and rainy conditions.

He also performs as a living statue, particularly a gold rock n roller with an anti gravity gold Mohawk, on a trophy base which reads, 'World's Greatest Air Guitarist', with rave reviews, with comments like "He's the best I've ever seen!"

During negotiation, venue site and ceiling height will need to be determined (he has shorter stilts as back up). Theme and costume choices can be discussed. He already has various costumes for each set of stilts, including a Circus Ringmaster, Robot with color changing lights, Mardi Gras, Sheriff Clown, Flamingo Rodeo, Pokee the scary clown, 4 legged Snow Deer, Uncle Sam/Patriotic, Day of the Dead, Zombie, Witch Doctor, Nosferatu/Vampire, Pirate, Cirque style Bird, Willy Wonka, Oompa Loompa, Elf, Drummer Boy and Nutcracker/ Toy Soldier. To complete the outfit, he will often use body paint and special effects makeup. Costumes can be custom made for your event for an additional fee, provided enough time is given. Depending on the costumes, 1-2 hours prior to the event may be required to suit up and put on the finishing touches. Under normal circumstances, he arrives at the event with an assistant who is helpful in prep work, and also doubles as a spotter.

Half of the agreed payment will be expected prior to the event as a booking fee, with the other half expected at the event.

The tall stilts require an outdoor venue or an indoor venue with 13 feet ceilings. He also has shorter adjustable height stilts if required. He typically brings an assistant, helping with costuming and spotting while on stilts to avoid potential problems. If he is to perform for multiple hours, a break is required between sets to cool down and hydrate.

Of course Cirque du Soleil, they pushed the boundaries of what was once considered the circus, bringing fresh creativity to the world. Morgan ultimately is a pioneer, going tall and going hard.

Stilts and costume, which Morgan will provide. He requires cold water between sets and needs somewhere to sit around 8 feet high in which to attach stilts.

Ceiling height needs to be predetermined.