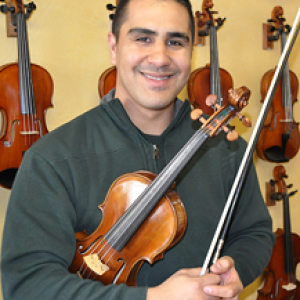 Montero Violins offers professional musicians for your upcoming event. Whether it be a solo instrument, duet, trio or quartet, we will customize your play list or leave the song selections up to us. We specialize in weddings, birthday parties and other special events and can accommodate all of your needs. Call for a free consultation today!

Everyone enjoyed his music and we were very satisfied. Highly recommended.

Michael Montero began playing the violin at age eleven in his native New York City studying with his beloved teachers Arlene Woz and Valerie Quinlan. He attended the Fiorello H. LaGuardia High School of Music, Art and Performing Arts in Manhattan and participated in the Manhattan School of Music preparatory division. Mr. Montero participated, on many occasions as a soloist and chamber musician in the Young Musician’s Competition and was awarded first and second place prizes. Mr. Montero served as the Music Director of the Auburn Chamber Orchestra in Auburn, New York. He was the former concertmaster of the Onondaga Civic Symphony Orchestra (Syracuse, NY) and held that post for six years. Mr. Montero was the music director of the Onondaga Youth String Ensemble, consisting of two groups of high school and middle school students, which he founded in 2005.
Mr. Montero received a BA in music from Rutgers University where he studied under Matthew Reichert.
After graduation, he studied violin repair and making with his beloved mentor, Thomas Cox of Baldwinsville, New York. Currently, Mr. Montero spends most of his time at the bench servicing clients that come from as close as the Lehigh Valley and Pocono region to as far as New York City. When not at his bench, Mr. Montero finds himself teaching and enjoys playing weddings and other special events. He lives in Emmaus with his wife, Jennifer, and daughters, Julianna and Gabriella. John M. said “I cannot imagine a violinist I would have rather had playing during my daughter’s wedding. With minimal effort, Slava and I arranged the music for the…”

Luis H. said “Thanks Ray and all the rest of the group, you guys played with excellence and elegance. Thanks for making the Farwell for Dolores memorable, she's in…”

Michelle E. said “We were very pleased with our violinist, Alex. I had never hired a performer online before, and was quite skeptical. I didn't have much time to find a…”

Emily K. said “FIVE STARS! Michael did a wonderful job. We hired him for our wedding and everyone loved it! He added an elegance to the evening and he is a wonderful…”