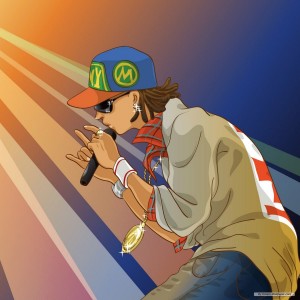 Terrell Daniel A.K.A. MELO BEATS is a local artist from Birmingham Alabama. He started freestyling at the age of 13, but thought he didn't have the resources he needed to beats. So, he gave up on the music and pursued other passions. 12 Years later, he met a producer named ovy Rivera A.K.A Migo Cardi and the two started making music together for about a year. They went their separate ways, ovy continued to make music but Terrell dropped it. Moving from state to state he finally decided to take the gift serious. Buying his own equipment, Terrell started making beats and went back into writing lyrics.

Be the first to review Melo Beats

Melo Beats is a shy personality, but could be a fun entertainer. He does his best to give the people what they want.

Melo Beats is musician signed with liquid sound records. He’s from Birmingham Alabama, currently living in fyffe Alabama.
He records from his own studio, does his own mixing, mastering, and also his own beats.

The lighting should be 2 colors or colors that coordinate with the music he’s created. The sound should consist of high quality. The mics should also be excellent.

All of the dreams I’ve had while sleeping influenced me to do music.