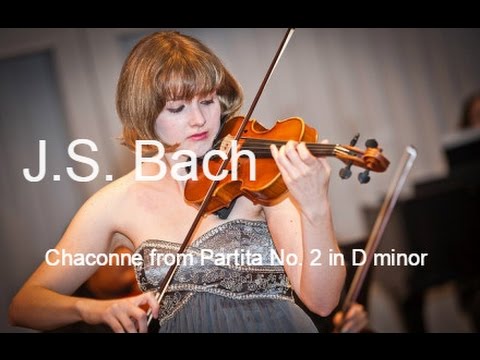 J.S. Bach - Chaconne from Partita No. 2 in D minor 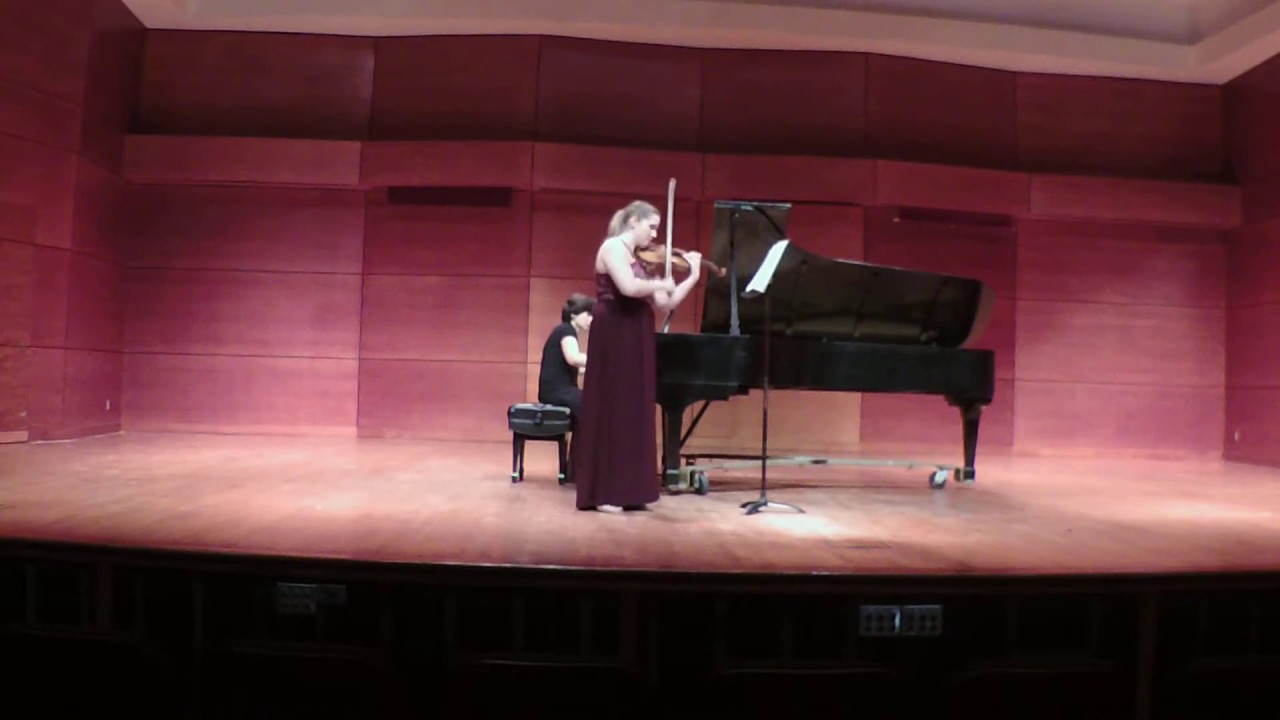 I am a professional violinist and violin teacher based in the Sandhills area of North Carolina. I received my Master of Music in Violin Performance from UNC Greensboro and my Bachelor of Music in Violin Performance from Converse College. I am currently a section violinist in the Winston-Salem Symphony and Greensboro Symphony, I regularly substitute with the North Carolina Symphony and Charlotte Symphony, and I was the Principal Second Violin with the Spartanburg Philharmonic Orchestra for the 2014-15 and 2015-16 seasons. I can provide solo violin, string duo, string trio, and string quartet music for whatever occasion: weddings, parties, social events, etc.

Mallory played at my church for our annual Thankoffering service. The music she selected was calming, beautiful and added so much to our service. My congregation was very impressed with her music and ability! It was our honor to have her at our service and I highly recommend using her if you need a highly qualified violinist! She arrived on time, was always available via email and had such a pleasant attitude...I would give her 6 star rating if I could!! You will be glad if you hire her!!

Mallory did such a great job at my wedding! Would highly recommend! Thanks again Mallory!

Perfect compliment to a Graylyn wedding in Winston Salem! Wonderful to work with and a virtuoso performance. Asked for and included a lovely cellist. Highly recommended.

She did a great job for us, was very professional.

Mallory was a pleasure to work and sounded great. Her part added so much to our event .

Mallory was amazing to work with, a great communicator and most of all a great artist. She played everything perfectly!! Recommend 100%

Mallory was prompt, professional, flexible, and incredible. She gave the ceremony exactly the right finishing touch and even played some off-beat requests of ours.

Mallory did an beautiful job playing for my wedding ceremony! She is very professional. Mallory played beautiful her violin as my guess arrived, then played during the ceremony all my choice of music. I was very Satisfied with her professionalism and performance. Mallory did an outstanding job all my guess enjoyed it very much. Thank you.

Mallory did an outstanding job playing for my daughter and son-in-law's wedding! She arrived early and played exactly what we had asked her to. She began with some music on her guitar as guests arrived, then played her violin when the ceremony began. She was helpful in giving the bride a list of suggested repertoire to play. Extremely professional and courteous. Thank you, Mallory!

Mallory was prompt, professional and played all selections extremely well. She is a very talented musician - her playing truly added another dimension of beauty and grace to our daughter's "fairytale" wedding!

Mallory Hayes received her Master of Music in Violin Performance from the University of North Carolina at Greensboro, studying with Fabian Lopez. She received a graduate assistantship to attend, which includes a tuition waiver and a monthly stipend. She holds a Bachelor of Music degree, with a major in Violin Performance, from Converse College where she studied with Sarah Johnson. She attended Converse on the Paddison Music Scholarship, a full comprehensive scholarship, and she graduated summa cum laude and received the Distinction in Performance, an honor given to one music student that is awarded unanimously by the music faculty. She is currently a section violinist in the Winston-Salem Symphony, Greensboro Symphony, a substitute violinist for the Charlotte Symphony and North Carolina Symphony, and was the Principal Second Violin of the Spartanburg Philharmonic Orchestra for the 2014-15 and 2015-16 seasons. She performed as First Violinist in a group with renowned cellist Lynn Harrel during his residency at UNCG in 2018, performing Brahms Clarinet Quintet. She was a featured soloist with the Spartanburg Philharmonic Orchestra in December 2015 and was named the 2015 Presser Scholar in recognition of outstanding achievement as a music major at Converse College. She won the 2013 Greater Anderson Musical Arts Consortium Concerto and the 2013 Converse Symphony Orchestra concerto competition, performing the first and second movements of the Barber Violin Concerto, respectively, with the orchestras. She won the Music Teachers National Association South Carolina State competition in the Young Artist Strings category in 2014 and 2015, going on the compete in the Southern Division competition. Mallory has studied and performed in masterclasses with esteemed artists and pedagogues such as Charles Castleman, Mimi Zweig, Aaron Berofsky, James Lyon, Benjamin Sung, Will Fedkenheuer, Janet Sung, Rebecca McFaul, Jonathan Kramer, Vadim Gluzman, Carolyn Huebl, Amy Schwartz Moretti, Violaine Melancon, and Paul Kantor. She has also worked with members of notable string quartets such as the Penderecki Quartet, the Juilliard Quartet, the Beo Quartet, the Shanghai Quartet, the Borromeo Quartet, and the Fry Street Quartet. She received a full scholarship to attend the 2014 Brevard Music Center Festival, performing in the Brevard Music Center Orchestra side by side with renowned concertmasters and musicians Bill Preucil, David Kim, Noah Bendix-Bagley, and accompanying world renowned soloists, most notably Itzhak Perlman. In the summer of 2019, Mallory attended the Spoleto Festival in Charleston, SC, as a violinist in the Spoleto Festival Orchestra. In addition to Mallory's active performing career, she has also kept up an active violin studio, teaching at the Lawson Academy of the Arts in Spartanburg, SC from 2014-2016, and privately out of her home. She has also led numerous college and high school level violin sectional rehearsals, including violin sectionals for the Senior High School Orchestra at UNCG Summer Music Camp in 2019, where she was a counselor and rehearsal assistant, the UNCG Symphony Orchestra, and the Converse Symphony Orchestra.

Most highly requested wedding music. This list is not comprehensive of all the pieces I can play and I do take requests of pieces not on this list:


Contemporary:
What a Wonderful World
The Prayer
A Thousand Years - Christina Perri
Can't Help Falling in Love
Thinking Out Loud - Ed Sheeran
Once Upon a Dream
Somewhere Over the Rainbow
You Raise Me Up 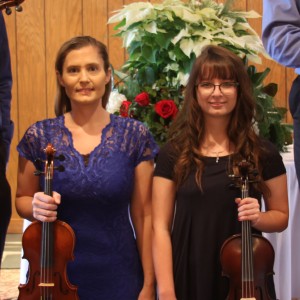 Kari L. said “I used Jenny’s Music Studio for my mother-in-law’s memorial service. I was very impressed. There are different options to their services, but I chose…”

Otto W. said “The violin and keyboard were the right combination for our Induction and Anniversary celebration. Their performance was superb and provided opportunities…” 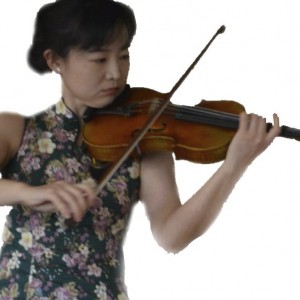 James M. said “Showed up on time and even dealt with inclement weather for our outdoor weather without hesitation. Would recommend to anyone.”

Greg M. said “The Fiddler and The Flutist not only sounded great, but they were super engaging with our patrons. We received multiple requests to have them back which…”