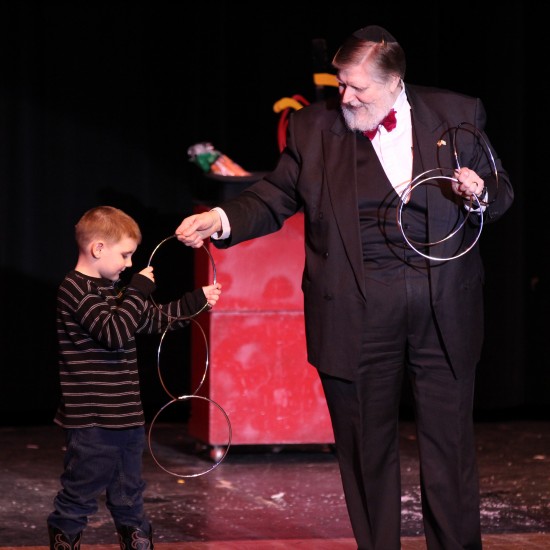 A cut above the rest

Due to the increase of CoVid 19 cases in our area, we are not booking shows at this time.
——————————
"Instant Fun for Everyone" Chazam is a comedy magician that specializes in FUN, doing a parlor style show using props easily seen from the back of a theater or large room. Chazam has been entertaining in the Kansas City area for 50+ years, at children's birthday parties, Blue and Gold banquets, children's churches, company parties, picnics, etc. He keeps the children and adults laughing and mystified with family friendly effects. Audience members may also be invited to participate, providing for photographic moments during the show. Balloon animals are also available.

Chazam is very cordial and responded to all our questions very quickly. He was very flexible when we had to reschedule. We had a birthday party for our 6 year old. All the kids sat quietly and watched. Chazam was very entertaining and was able to get everyone giggling. He has a good mix of tricks. I would highly recommend.

We really enjoyed having Chazam at our family Christmas party. He was very entertaining and included family members . We would highly recommend him . Thanks

Your Christmas family get together was great fun, loved entertaining all the kids and adults that attended.

You will really enjoy his show and he's really great to work with!

Had a great time with both the adults and children. I couldn’t have asked for a nicer group of people to entertain.

We hired Chazam for our 6year old birthday party. He was very kind and professional. Thank you!

Chazam showed up early to set up everything ahead of time. Everyone enjoyed his performance. He stayed a little longer to make sure every kid had a balloon animal.

I truly appreciated the warm reception, and the opportunity to try the Indian cuisine after the show.

Chazam was a delightful, entertaining, magician. We recommend him highly.

As Chazam, I really enjoyed sharing my program with your grandson and family.

Kids and adults at our event enjoyed the magic show very much. Kids loved getting an animal shaped balloon later as well.

I hired Chazam for an event

He arrived early to set up. He provided a fun, entertaining show. He was very good with all ages and we all really enjoyed his show. I would hire him again.

Chazam did a great, kid friendly show for our event! He came early and set up so he was ready to perform as soon as the children arrived. Children of all ages loved the show! He was a pleasure to work with, responsive, and accommodating. I would definitely consider working with Chazam again. I highly recommend using him!

We hired Chazam as our featured entertainment for our annual Christmas Diner Party. Chazam communicated well before the event and arrived early for set up. We had 50 guests in attendance. Dessert ran a little late and Chazam was very accommodating. Chazam opened his act with a couple of classic tricks that were warmly received by the crowd. As he did those tricks he was also learning the crowd. He then selected two people from our group for an audience participation card trick. He was very personable and put everyone at ease. By the end of the trick he had the whole room laughing, cheering and clapping. He enlisted a sassy 92 year old woman for the Chinese linking ring tricks. Others braved the hand Guillotine and trusted Chazam that they would come away with both hands. Everyone enjoyed the show!!!

Fabulous for all ages!

We hired Chazam for our Cub Scout Blue & Gold Banquet, and could not have been more pleased. He was very professional, timely, reasonably priced, and stayed in touch with us the week before and day of our event. Both parents and children in attendance thoroughly enjoyed the performance, and we would hire Chazam again in a heartbeat!

Chazam interacts with his audience, doing some of the classics of magic, mixed with storytelling and humor, developing a rapport with those watching, encouraging them to assist in making the magic happen.
FUN family oriented entertainment for all ages, using NO foul language or blue material.

Chazam has been performing in magic since 1969.
He co-founded the Astra Magic Company in 1970, where he honed his talents and expertise, demonstrating tricks over the counter and performing at children's parties, conventions, trade shows, public shows with the IBM (International Brotherhood of Magicians) club, etc. He is currently an officer of the IBM Ring 129, Recipient of the Sorcerer's Circle, a 25 year member of the Order of Merlin. Chazam performs parlor magic (effects that are small enough to be done in a home, but large enough to be seen on stage or in an auditorium). He is also able to do intimate magic for small groups in an intimate setting, such as table to table in a restaurant or banquet setting.
.

My act is flexible enough to present in a family room at a home residence, to performing on a full stage in a theater.
Venue needs to provide sufficient lighting to provide adequate visibility for larger audiences. Performer can provide sound for audiences up to 150 if venue is unable to.

My mentor in magic was H. Claude Enslow, who performed in the KC area for many decades. Claude performed in vaudeville, on radio and television. He was the Santa Claus for the downtown Jones store for over 16 years. I learned most all of my timing and interaction with my audiences, with both children and adults, by accompaning Claude to his bookings, and observing his technique and style over the last years of his life.
I also attend magic club meetings and magic conventions to hone my skills and learn techniques from Master’s in the trade to improve my performance skills.

Set up can take up to 30 minutes

Sandra H. said “I would definitely hire AE again. Robert was awesome with the kids and did great work.”

Tara A. said “I really appreciated everything ViVi the Clown did at my son’s first birthday party!! She is very gifted in what she does. She also captured some memorable…”

Julianne J. said “had a couple groups of youngest group of 4-7 loved hime. They were amazed and amused!”

Shelia B. R. said “Mike really knows how to work the Crowd. He has the ability to bring out the "belly laugh" from all ages! He is really great to work with. He…”