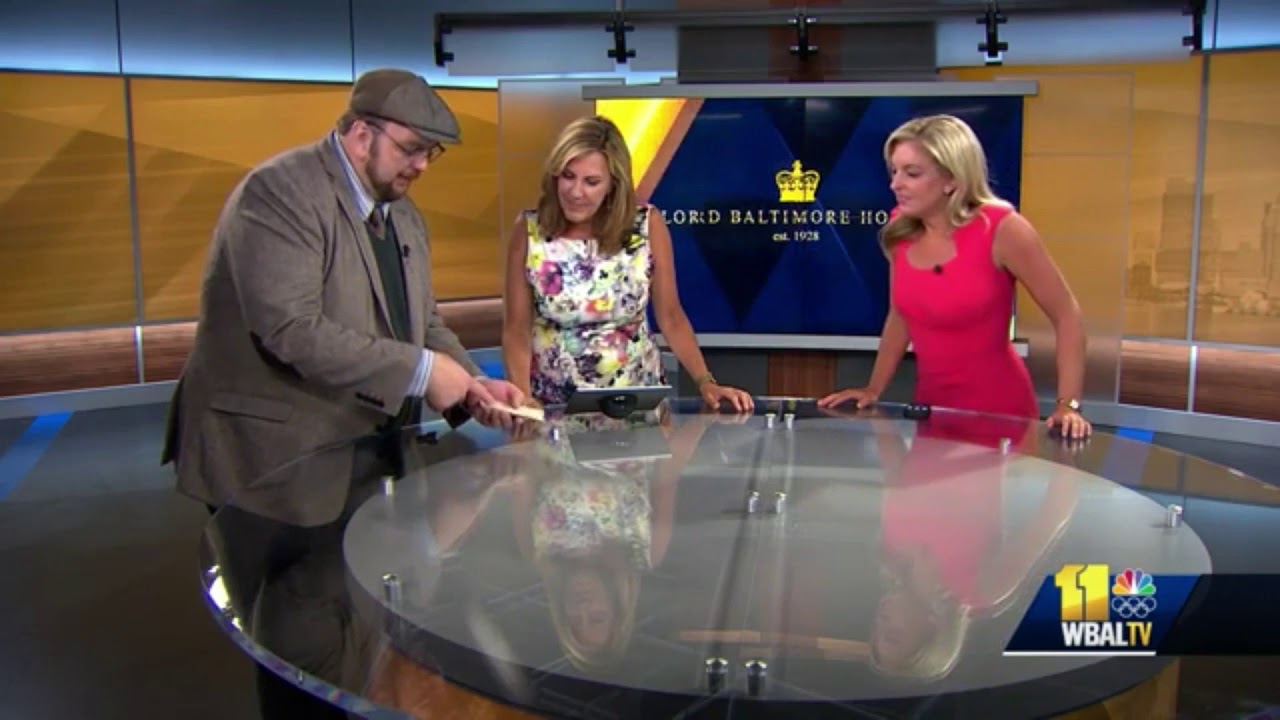 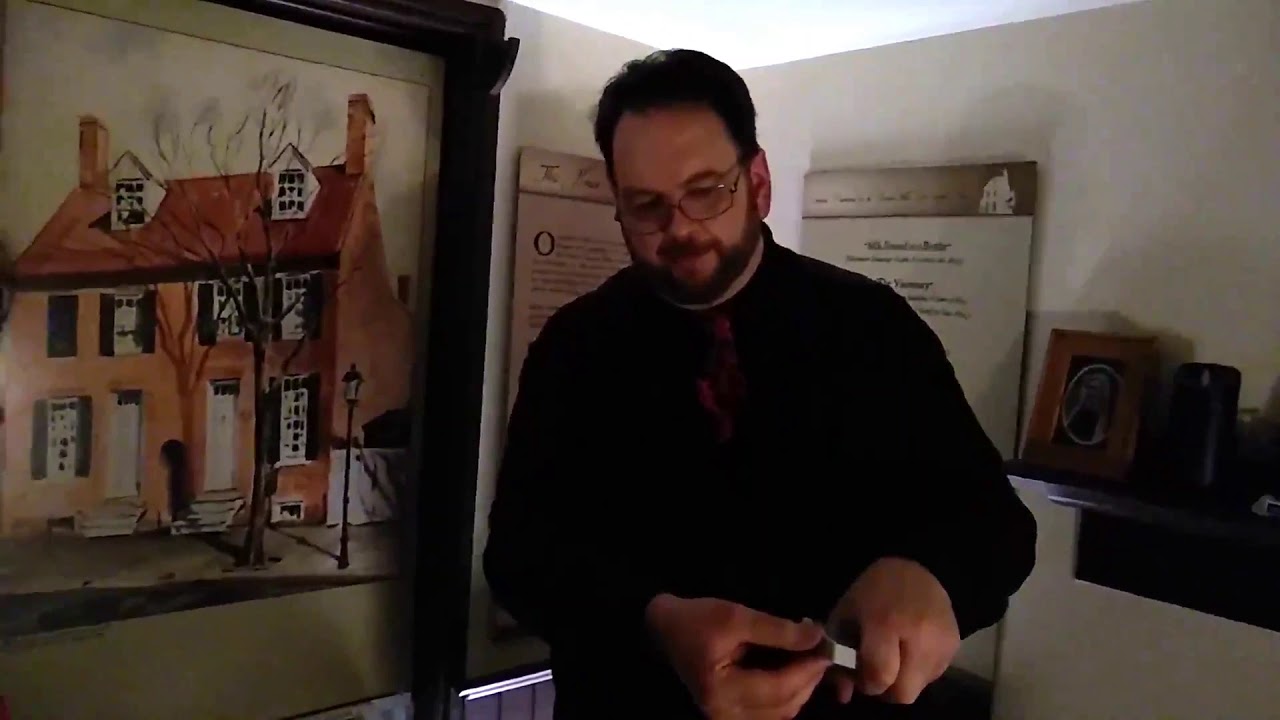 Vince at The Poe House in Baltimore 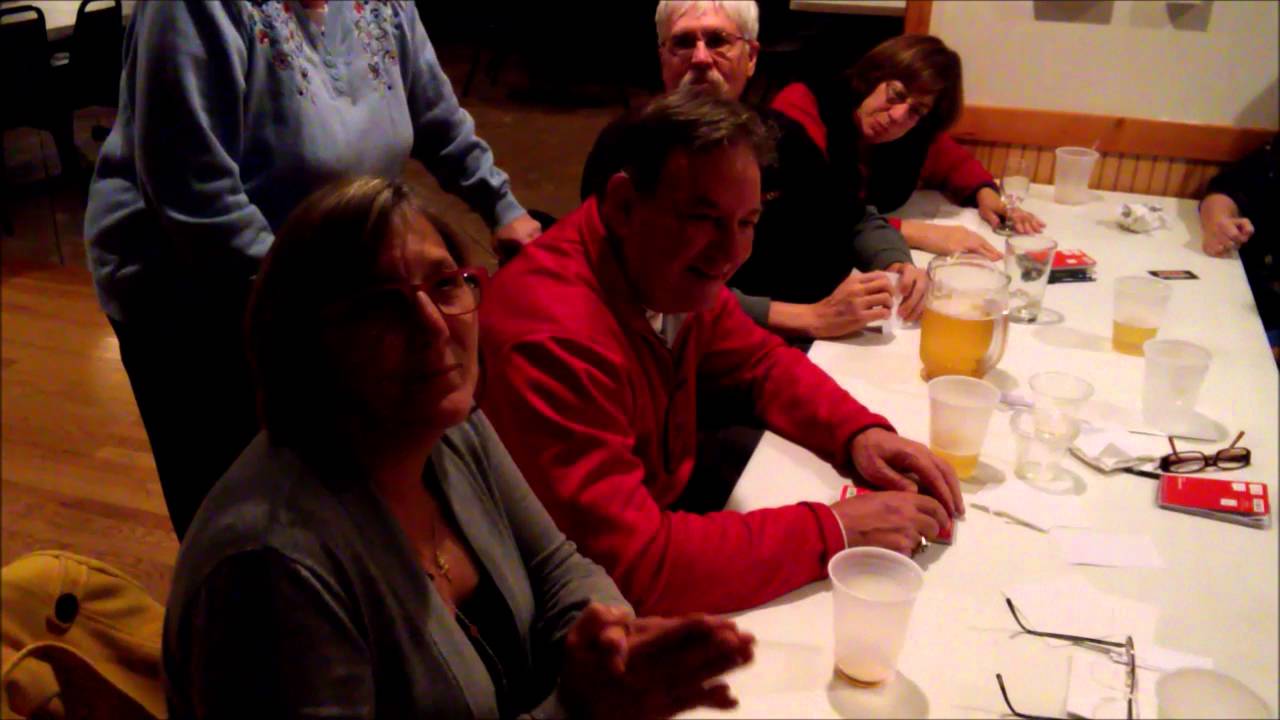 My 1st performance at the Ocean View VFW Hall 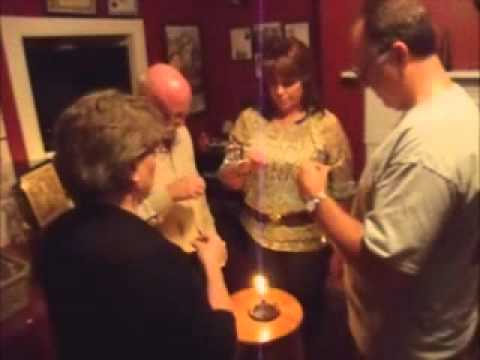 Are they talking to Jack the Ripper's ghost? 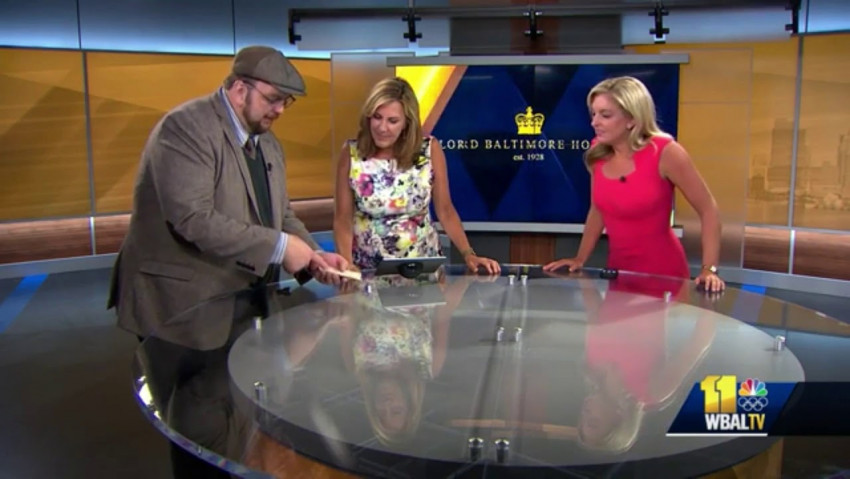 Here's Vince on WBAL in Baltimore 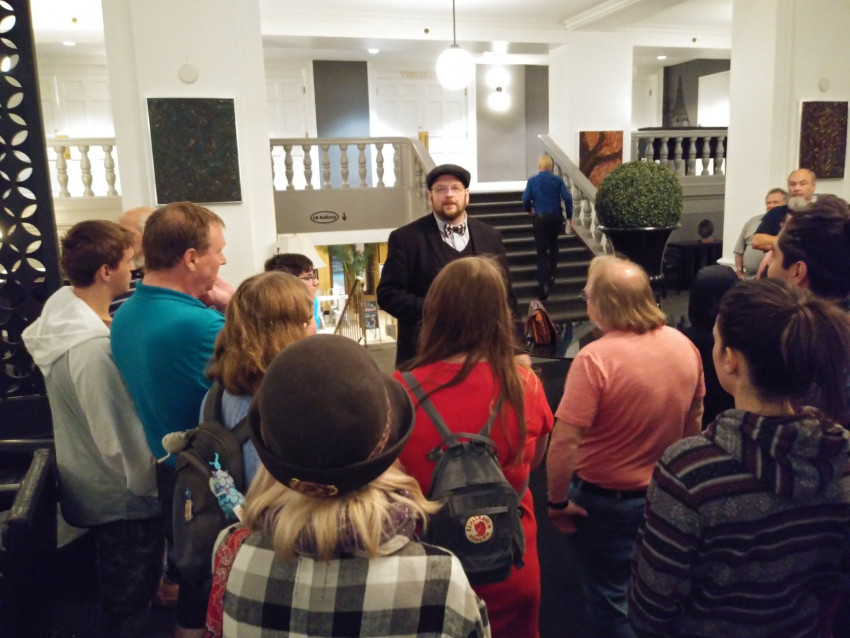 Magic with the Titanic! 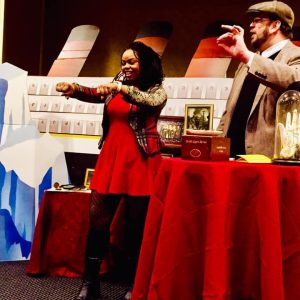 Vince Wilson is an author, inventor, hypnotist, paranormalist, magician, lecturer. He has appeared on the Discovery Channel, Travel Channel and Destination America and on dozens of local TV news shows, radio shows and newspapers! Vince will put on the greatest Magic and Murder Mystery Show on Earth!

The Magic and Murder Mystery Co. combine magic, hypnosis, history and murder! During their custom mystery parties, our experts will “contact the spirits” with your guests to solve murders and crimes of the past! Who was Jack the Ripper? How did Edgar Allan Poe die? Who murdered two lovers after they already survived the Titanic Disaster? You and your guests will decide!

Be the first to review Magic and Murder Mystery, Co.

Have you ever been to a Murder Mystery Theater before? A dinner theater or party? Perhaps it was at a local restaurant or on a cruise. I bet we can guess how it went…. A troupe of actors come out and perform in a “detective trope” story. Basically, a cop, a detective, some suspects (rich couple, floozy mistress, etc.) and a victim of course. All usually dressed like they tripped out of the 1950’s. Eighty percent of the time you don’t event look for clues. IT IS A PLAY.

The Magic and Murder Mystery, Co. lets you look for clues and someone (sometimes someones) will solve the mystery! We use illusions and special effects combined with original professional props to customize the mysteries in ways never before seen! We even have a hypnotist to really add to the show! How phenomenal is that?

Your Murder Mystery Theater will be like none other!

People will be talking about your event for years! Heck, they may remember it for the rest of they’re lives!

The Magic and Murder Mystery Co. can customize their performances for almost any venue and theme!

Vince will hypnotize volunteers and send them back to see historical figures like Edgar Allan Poe, Abraham Lincoln see Jack the Ripper just before he murders his last victim!

Vince has also created highly entertaining seances and Spook Shows! Seemingly communicate with the ghosts of the past and experience mystery like never before! Have your guests leaving your event questioning everything they though they knew!

In his high energy show, Vince entertains and amazes as he not only assures the audience while explaining the myths of hypnotism! The hypnotic trance state creates a sense of heightened awareness that brings out the best in the volunteer performers. The volunteers role-play in various hypnosis comedy routines that are designed to have your audience doubled over with laughter.

Vince is an expert palm reader and personality tester! He will help you better understand your future by examining your life through the palms of your hands! Then, he will see how well you know yourself! A personality test will determine your true self! In addition, each guest gets to take home the palmistry results as a souvenir!

Vince has appeared in The Discovery Channel, Travel Channel, NatGeo and Destination America as well all local TV stations in the Baltimore broadcasting area. He has also appeared on numerous podcasts, radio shows, and YouTube videos. Vince continues to be a prolific contributor, creator, lecturer, and script writer. He performs regularly in the Mid-Atlantic and on the East Coast, but has also performed in Chicago, Los Angeles CA, San Jose CA, UK, and Italy as well as many other cities in the US.

We can work in almost any environment with almost no setup. We'll bring our own tables and chair is we must!

The mysteries often involve events from the past intruding into the present due to supernatural forces. Spirits from the past, wronged in some way, or, perhaps given a new opportunity to wreak havoc, return to help or even hinder the hosts and guests attempts to find clues and solve the mystery at hand!

References to real aspects of Spiritualism and paranormal history will be discussed and intertwined with tales of mysterious occult orders and very real human betrayal!

Of course each mystery can be tuned down (or even up!) to at your discretion and completely unique stories and illusions can be created for your event! New mysteries are created and added all the time and below are just some of the more popular that we currently offer:

Vince Wilson’s and his colleagues can customize their shows for different occasions, events and even other locations!

We are sure some of our site’s visitors have been to Murder Mystery Theaters before, but not like this! More drama and history then other places and most importantly – you will be in contact with the supernatural and paranormal!

WHAT IS REALITY, AND WHAT IS ILLUSION?

One hundred years ago several suicides and accidental deaths took place that puzzled detectives and the public alike. But were they really suicides? If not, who were responsible for these vicious acts?

The guests thought they were there to see a lecture on the Spiritualist Movement, a time when the Spiritualist thought they could talk to the recently departed! Instead, they and their hosts, The Magic and Murder, Co., lead you on a spiritual journey into the unknown in order to solve a murder from more than ten decades ago!

When you are there you will have to decide for yourself, what is real and what is illusion?

Guests will be lead from each room to the next in search of clues left by the spirits of the past. Clues to the murderer of a young woman (and perhaps more still!) will be revealed each step of the way until one of the guests is able to look to within for the answer!

Do you have what it takes?

– Look for clues and find all the suspects photos from 1912!
– Commune with the spirit of a murdered young woman!
– Investigate the Séance Parlor and creepy cellar for more evidence!
– All this and more!

The Return of the Ripper!

Past life regression and artifacts from the past will finally reveal who Jack the Ripper really was! Look at actual newspaper clippings from 1888 London, reproduction documents and photos from the murder scenes while deciphering a puzzle that has taken more than a century to solve!

In the mid-19th century, England experienced an influx of Irish immigrants, who swelled the populations of England’s major cities, including the East End of London. From 1882, Jewish refugees from Eastern Europe and Tsarist Russia moved into the same area. The civil parish of Whitechapel in London’s East End became increasingly overcrowded. Work and housing conditions worsened, and a significant economic underclass developed. Robbery, violence and alcohol dependency were commonplace, and the endemic poverty drove many women to prostitution. In October 1888, London’s Metropolitan Police Service estimated that there were 1200 prostitutes and about 62 brothels in Whitechapel. The economic problems were accompanied by a steady rise in social tensions. Between 1886 and 1889, frequent demonstrations, such as that of 13 November 1887, led to police intervention and further public unrest. Racism, crime, social disturbance, and real deprivation fed public perceptions that Whitechapel was a notorious den of immorality. In 1888, such perceptions were strengthened when a series of vicious and grotesque murders attributed to “Jack the Ripper” received unprecedented coverage in the media.

Join Parapsychologist and Ripperologist Vince Wilson and his colleagues as they uses real CSI type skills to find a historic killer before he gets you! When things start going wrong, you can’t call 911. How the police help you against the supernatural! A story straight From Hell!
Rated R.

The Death of Poe

"The Locket is haunted" the man said very matter of fact. "It was once owned by Mrs. Sarah Elmira Royster Shelton. She was Poe’s fiancée at the time of his death, and childhood sweetheart."

They said it can act as a portal, and those that have been in its presence alone have claimed to hear voices, words of unearthly spirits vocalizing. Lenore……

Some say it can even reveal the mystery of Poe’s death!

At the Mountains of Madness!

When one thinks of classic horror, you probably think of Edgar Allan Poe. Throw the word “weird” in there and you have H.P. Lovecraft!

The so-called “Cthulhu Mythos” created by Lovecraft have been adopted into many sci-fi and horror stories over the years. Hints of it can be found in the works of Stephen King and Clive Barker. The Hellboy comics and films have also borrowed heavily from Lovecraft. So- detailed, rich and enthralling are these “histories” of the “Old Ones” that some have gone as far as to speculate – are these stories really just fiction? If not, if indeed they are part of our reality, what does that mean for the future of mankind?

A scientific expedition to Antarctica composed of a party of scholars from Miskatonic University, led by Geologist William Dyer, and discovered fantastic and horrific ruins and a dangerous secret beyond a range of mountains higher than the Himalayas. The group that discovered and crossed the mountains found the remains of fourteen ancient life forms; completely unknown to science and unidentifiable as either plants or animals. Six of the specimens are badly damaged and the others uncannily pristine. Their highly-evolved features are problematic: their stratum location puts them at a point on the geologic time scale much too early for such features to have naturally evolved yet. Because of their resemblance to creatures of myth mentioned in the Necronomicon, they are dubbed the “Elder Things”.

None but Dyer and a graduate student (who was driven insane) survive. Professor Dyer concludes that the Elder Things and their civilization were destroyed by the creatures they created and that this entity has sustained itself on the enormous penguins since eons past. He begs the planners of the next proposed Antarctic expedition to stay away from things that should not be loosed on this Earth.

Decades later, arcane scholar Vince Wilson has come across artifacts from Professor Dyer’s failed expedition. He plans on demonstrating to the guests present that he can travel via astral projection to the lost city in the Antarctic and bring something back with him! Is he insane? If not, will anyone survive this night?

Join Parapsychologist Vince Wilson and his colleagues as he tries to reign in an ancient terror from beyond time and space!
Rated PG-13

We are heavily influence by "story magic. Not just stage illusions or simple slight of hand, but illusions that have a basis in a morality tale or history.

We can customize for almost any environment! 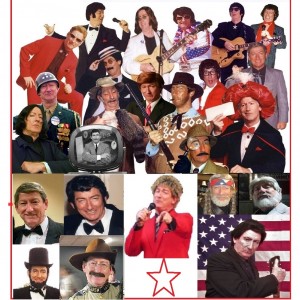 Loretta M. said “Tim Beasley was fun and entertaining, engaging my dad and the family and friends who were there to celebrate my Dad's 80th birthday party! He was professional,…” 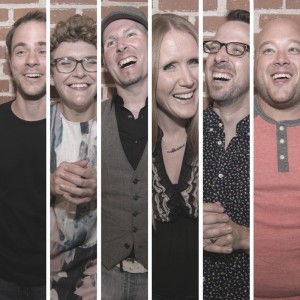 Pam S. said “Thanks for emceeing our event and helping us send off our friend! Andy did a great job leading the discussion and helping personalize the event exactly…” 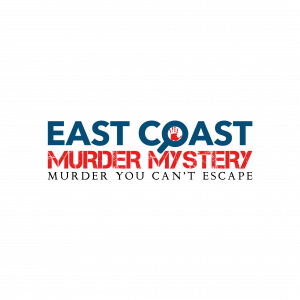 We Provide high quality and fully interactive Murder Mystery events. Any party whether a wedding or birthday party we can make into a killer experience your guest…

James H. said “Dean and my-Lady were totally outstanding … I couldnt have asked for more … not only were they affordable (I was flipping the bill for a boss I admired)…”