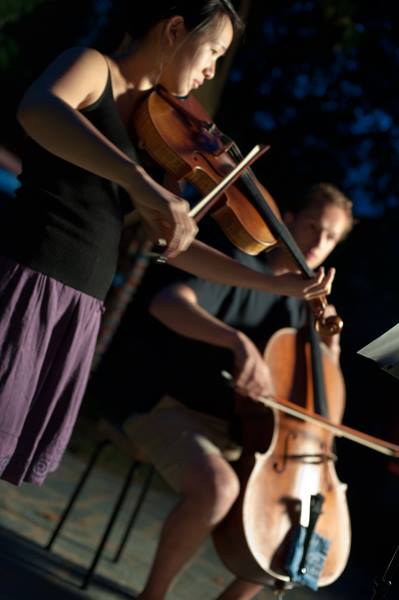 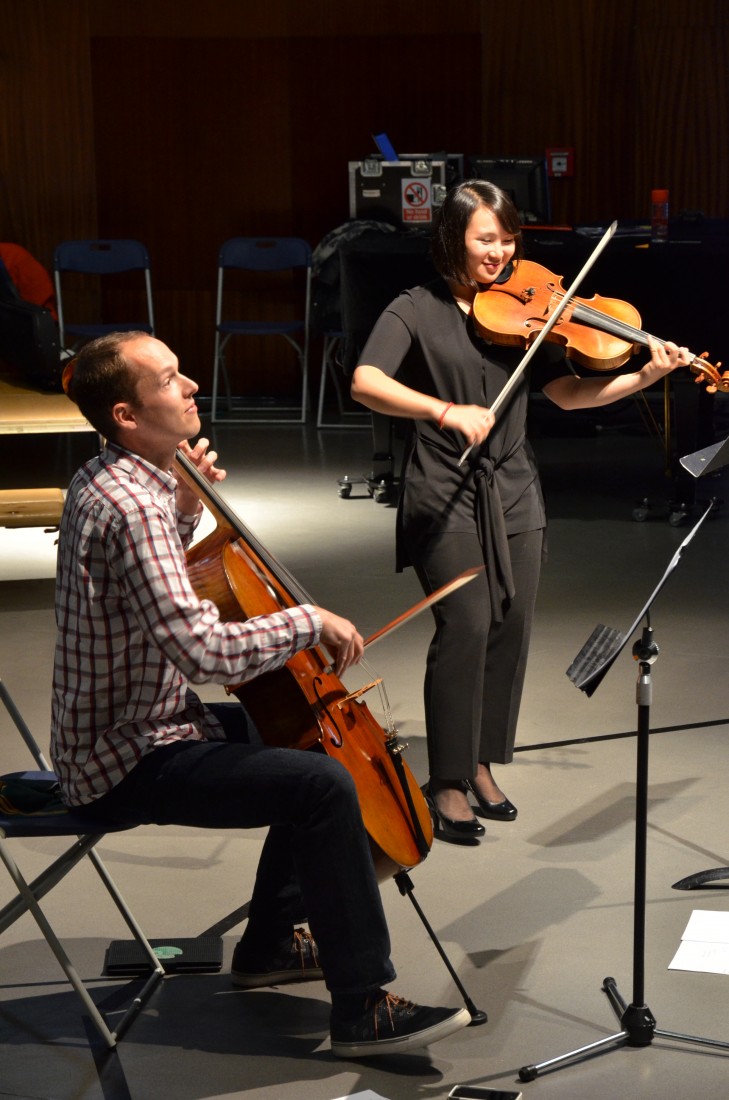 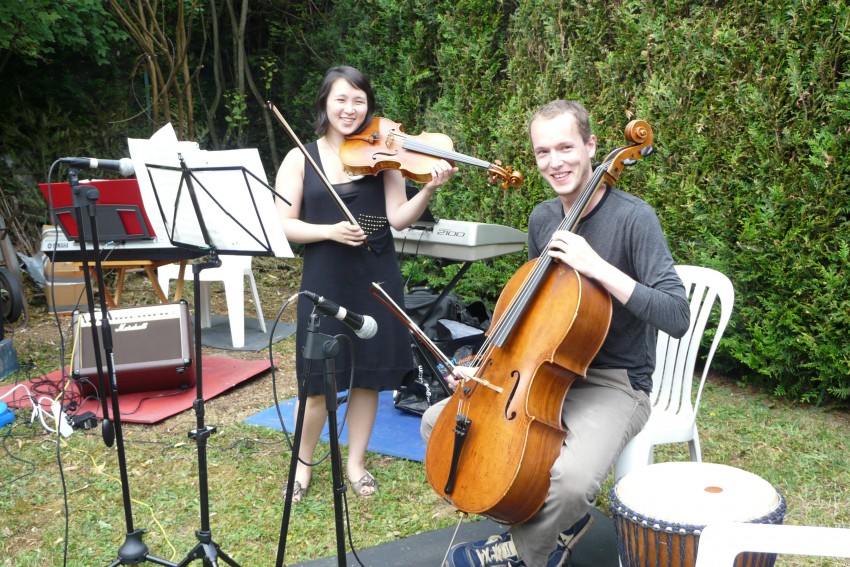 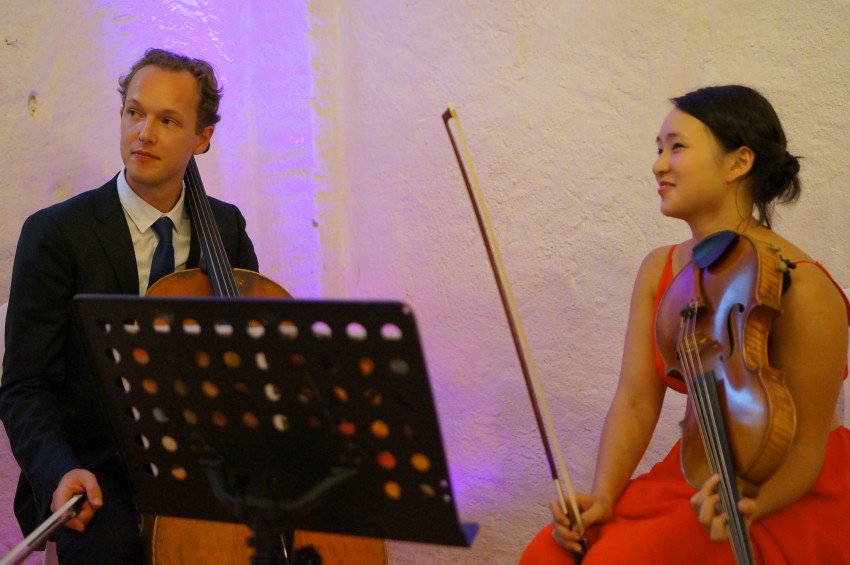 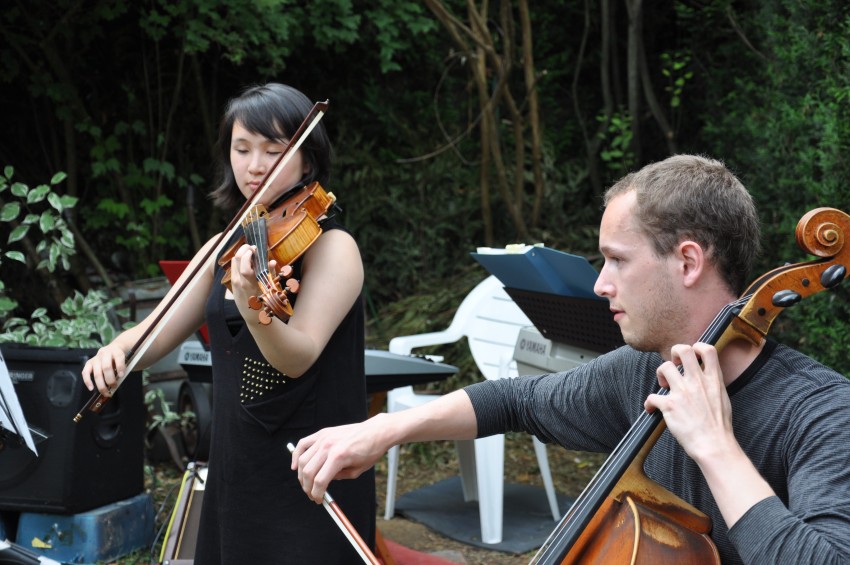 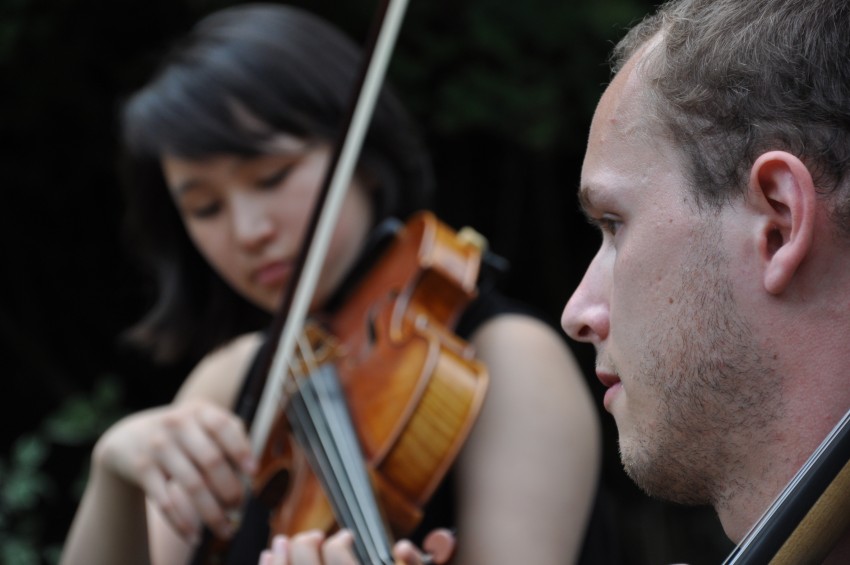 M @ A Duo is Kim Mai Nguyen, violist, and Avery Waite, cellist. We are a Juilliard-trained classical duo performing music from the baroque, to romantic, to modern. We also play wide range of original arrangements of jazz standards, pop hits and world music. We have been playing together for three years now and have performed at many different kinds of events including weddings, private parties, conferences etc. Whether you want something elegant and classy, or something edgy and hip, we can easily adapt to the vibe of your event with of our diverse repertoire and variety of musical styles.

Great experience and very professional. Lovely music, everyone had an amazing time at our venue.

What a blessing it was to have such a professional group from the beginning to the start of the process. Could not have been more accommodating and made the party more than perfect! Please do not miss your chance to book this wonderful group!

Beginning with our first personal communication, I knew I had chosen the right musicians for our event, a funeral reception for a very classy, beautiful woman from Shreveport, Lousiana. They asked about particular music selections we felt would be most appropriate for this type of event. The woman we were honoring, was very happy-going and lively, so we asked for pieces that would reflect those qualities. M&A Duo took our requests to heart and presented a program that delighted everyone. I give them 5 Stars for their musicianship excellence and for their take our needs into consideration when planning their repertoire. I look forward to hopefully being able to work them again for future similar events.

I needed a violin and cello duo for a Memorial Service and M&A Duo were excellent. There music was wonderful and exquisite. I appreciated their help beforehand on which pieces to play. They arrived on time getting chairs and set themselves up. I will definitely use M&A Duo again. Thank you so much!

M @ A Duo is experienced, reliable and professional. We understand that this is 2017 and that quick and easy communication is crucial. As performers, we can be purely background, or we can play a more active role at your event. We have a wide range repertoire that will appeal to any kind of audience. If called upon to play certain song or something by a particular artist or band, we have arrangements of many audience favorites. If there is a sentimental moment to accompany, we can choose from a variety of romantic serenades.

Cellist Avery Waite is an active performer, educator, blogger, and composer. In addition to being involved in a wide range of education programs, social justice initiatives, and cultural diplomacy projects, he is the artistic director of Music Feeds Us, a concert series designed to promote hunger relief and awareness. Originally from California, Avery has appeared in concert at Avery Fisher Hall, The Kennedy Center, Alice Tully Hall, MoMA, Carnegie Hall and has performed solo in Europe, Asia and North America. Avery has been a featured performer on Sesame Street and was also recently selected to perform in concert with Itzhak Perlman at the Perlman Music Program. Avery is also an active composer and arranger. Inspired and moved by his most recent experiences in Afghanistan, he has done extensive arranging of traditional Afghan folk music. Selections from these arrangements were recently performed at the Spoleto Music Festival in Charleston (SC) and at The Juilliard School. Avery completed his undergraduate studies at Oberlin Conservatory in 2010 and received a Masters degree from The Juilliard School in 2012.

Originally from France, violist Kim Mai Nguyen has performed across the globe as a soloist, chamber musician and orchestral player. She recently performed for Michelle Obama and the spouses of the heads of government attending the United Nations General Assembly. She has also appeared in concert at such venues as Carnegie Hall, Alice Tully Hall, Avery Fisher Hall, Konzerthaus Berlin and Salle Pleyel in Paris. Kim Mai has participated in numerous festivals such as the Castleton Orchestra Festival, New York String Seminar and Tanglewood Music Center and has had the honor of working with distinguished conductors as Christoph von Dohnanyi, Tan Dun, Alan Gilbert, Bernard Haitink, Jaime Laredo, Lorin Maazel, Kurt Mazur and John Williams. Passionate about both modern and baroque viola, Kim Mai has performed with William Christie, Monica Huggett, Ton Koopman and Jordi Savall. Believing strongly in the concept of artist as citizen, she has participated in numerous cultural exchange and teaching projects including trips to Afghanistan, Jamaica, Guatemala and Mexico. Kim Mai holds both undergraduate and graduate degrees from the Juilliard School in New York.

We are an acoustic duo, so we do not require any amplification. All we require is two chairs and an area large enough to feel comfortable while playing.

We can play a complete set of music from the Baroque era, including works by Bach, Telemann, Couperin, Handel and many more. If requested, we can insert a variety of different pieces by romantic composers such as Tchaikovsky, Saint-Saens, Brahms and more. If you would like a more pop-inspired set list, we can perform a variety of hits from Radiohead, Nirvana, U2 and Bob Marley to name a few. If you are interested in a world music vibe, we have a dynamic collection of arrangements of folk music from around Asia and the Middle East.

We are both graduates of The Juilliard School in New York City. Our choice of repertoire and performance style is influenced by the wealth of fantastic classical music ensembles that we encountered in New York. We are also influenced by various classical musicians who have managed to dabble in different music genres, including rock, pop, world music and jazz. Both members of M & A Duo have traveled and performed across the globe. Their most recent trip led them to Kabul, Afghanistan, where they collaborated on cross-cultural musical projects with local Afghan musicians.