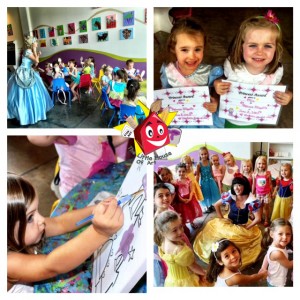 Age group from 18 months to 12 yr old! Families and groups are invited to host a private art party, workshop, Girls scout, or field trip. Children learn to work with an array of art materials and create unique projects while building self-awareness and confidence through the creative process.

In addition to the art classes and special events, The Little House of Art also offers 'free style art' open studio time, for children and Guardian to come in with no set appointment!

As a huge proponent of leaving a positive review when services/products provided are good, I must also share this unfortunate and avoidable negative review of my experience. My husband and I purchased a 2-hour weekend timeslot for our son's birthday party and upon entering the facility, more than half of the lights were out (we have many photos taken during the event to show this). When asked could more lights be turned on, the owner stated that the lights blew earlier in the day (likely due to a storm in the area) and that the facility was an older warehouse. With guests arriving and not being able to do anything else but proceed at that point in time, we tried to make the best of the lighting situation. Guests also noticed and asked why the facility was so dimly lit. Thankfully, kids are kids and they will have a good time almost anywhere there is Elmo, cake, balloons, and pizza. When the party ended and I asked about some type of discount being extended to us for the lighting inconvenience, the owner became very defensive and unpleasant stating that her husband came as soon as he could during the latter half of the party to fix the lights. While this was the case, we had the inconvenience of an awkwardly dark party space followed by the inconvenience of the owner's husband on a ladder trying to fix the lights in the middle of the room where the children were playing and eating. When I asked the owner had this ever happened before, she stated no. I told her that I should not have to pay the same as the customers who had the experience of a seamless light-filled event space. After much unecessary back and forth, the owner reluctantly agreed to a $10 discount. As a business owner, I had hoped she would have easily understood the concept of excellence in customer service and the value of willingly trying to rectify a situation when the services/products provided do not function properly causing a subpar (and per the owner the first lighting situation of its kind) customer experience. Let me just end with the following...when you rent an event space (e.g., for a birthday, wedding, graduation, retirement) and you get there the day of the event and the space is not properly lit, this will impact your experience during and photographic memories of that special day. You (the customer) should not be spending the last few minutes of that special day arguing with the owner trying to explain why you should not be paying the same as the customer who experienced the full functioning potential of the facility.