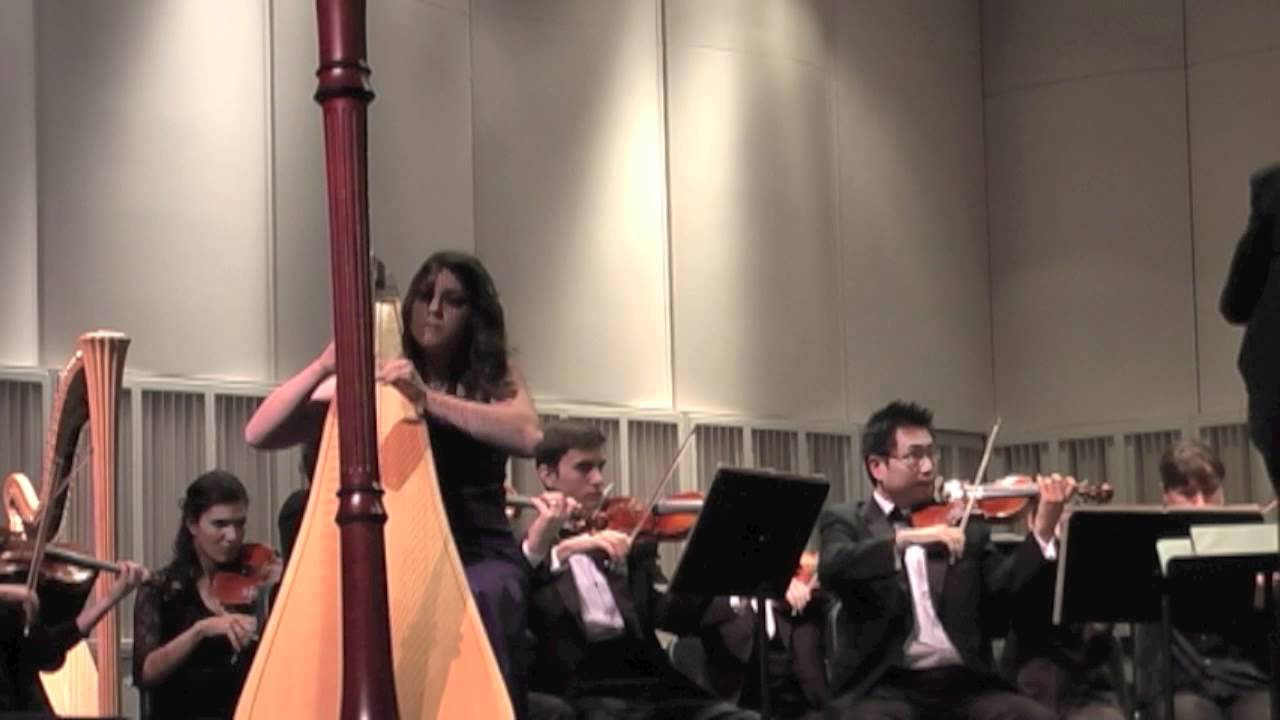 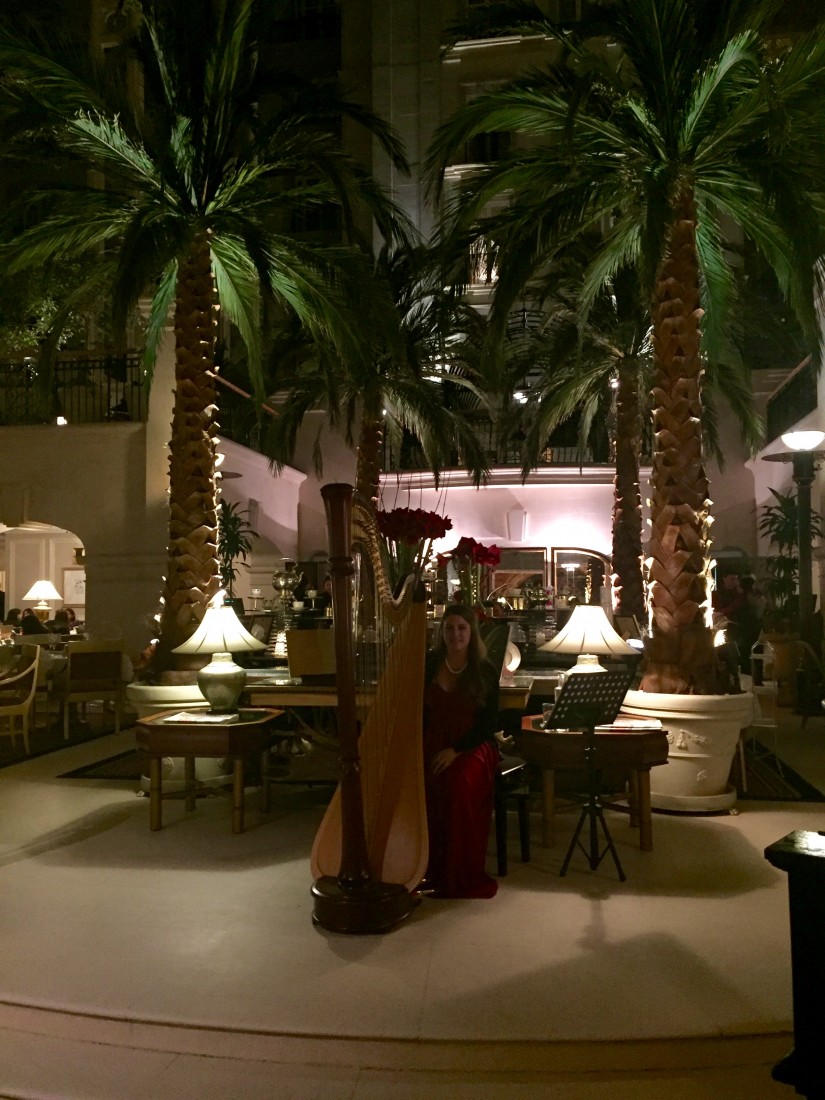 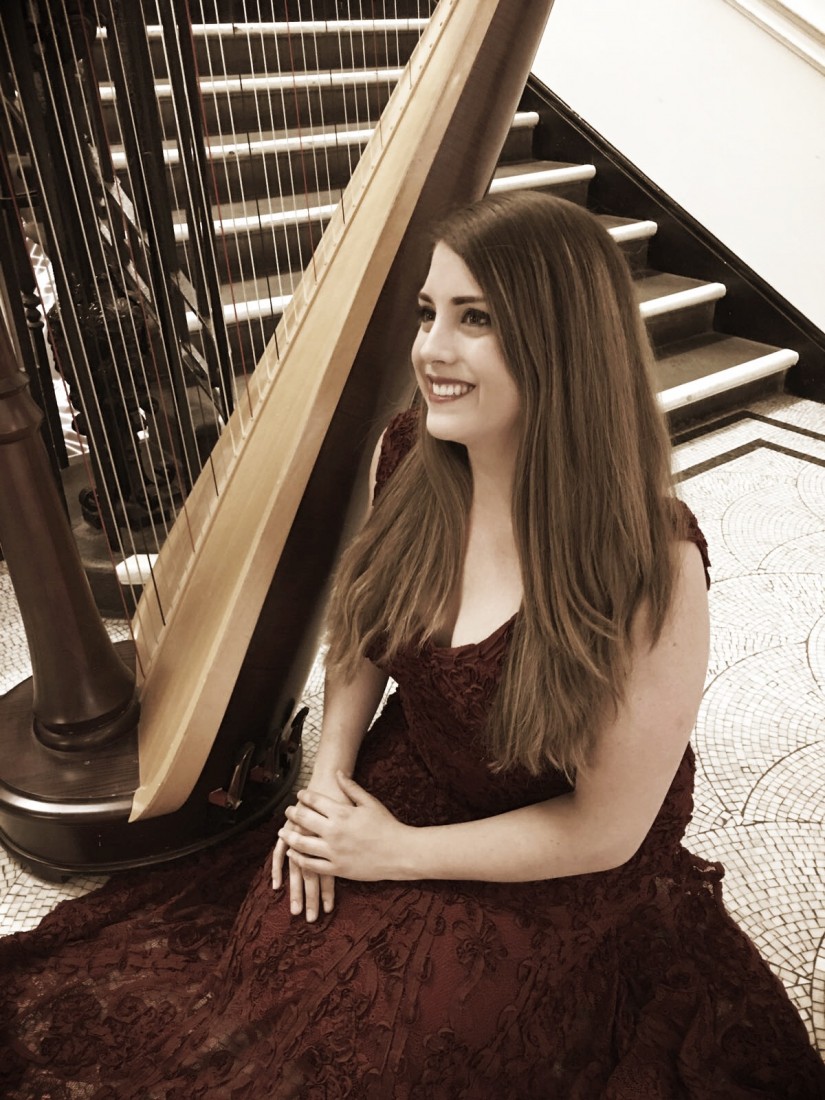 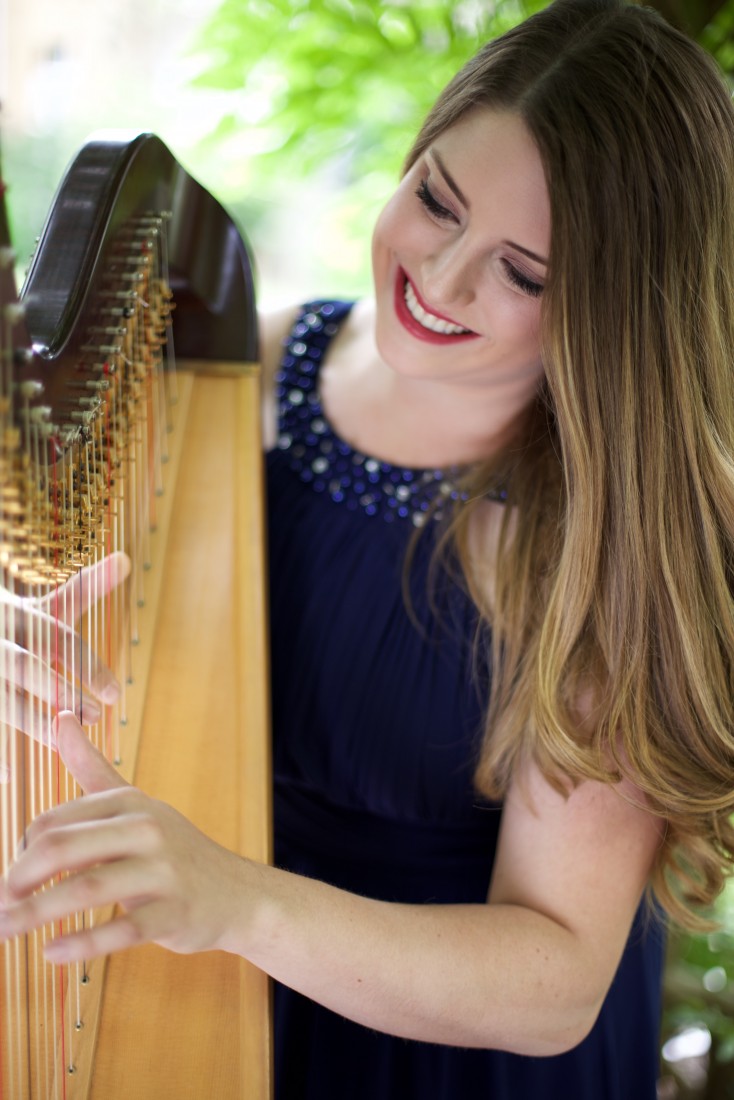 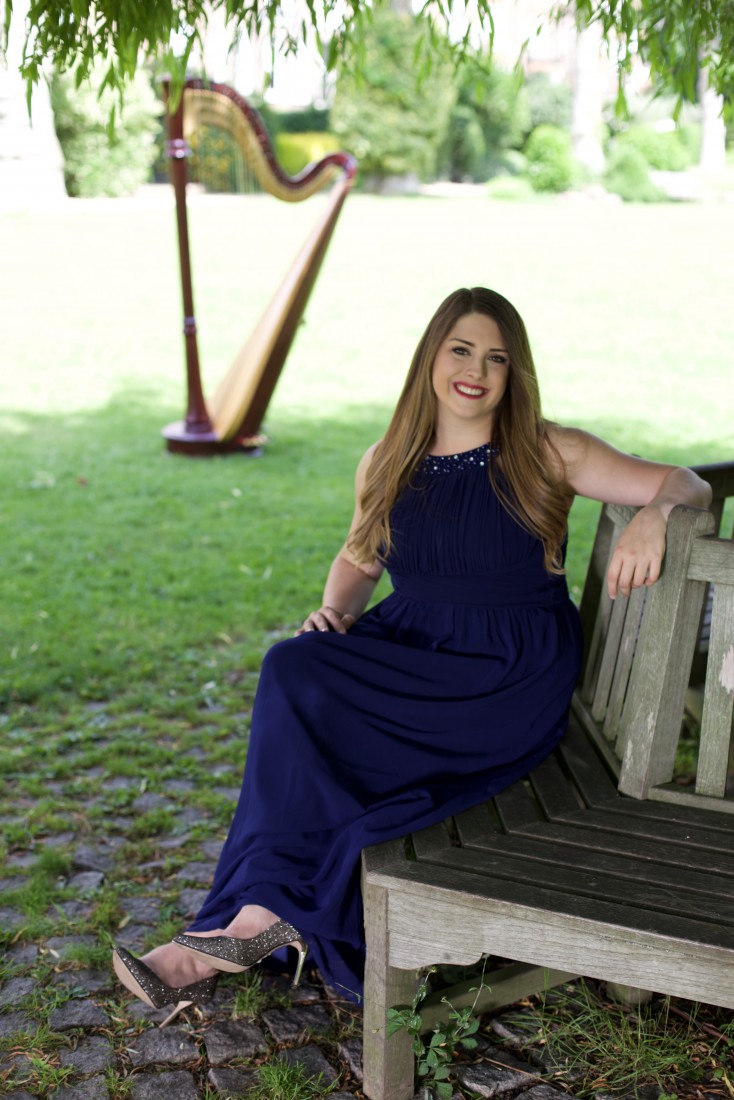 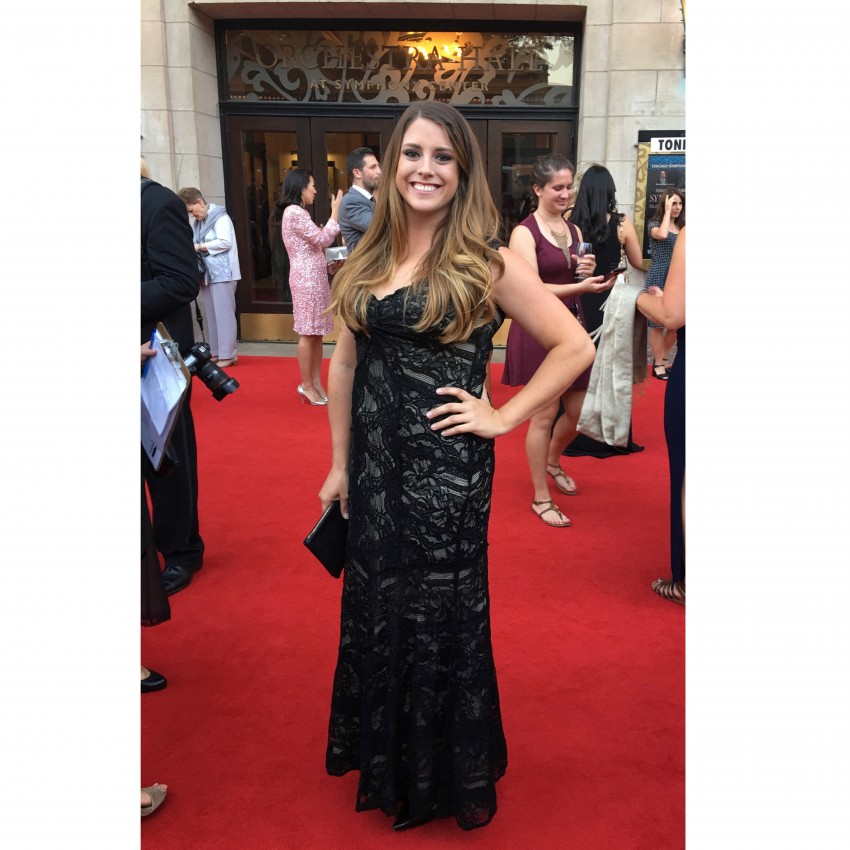 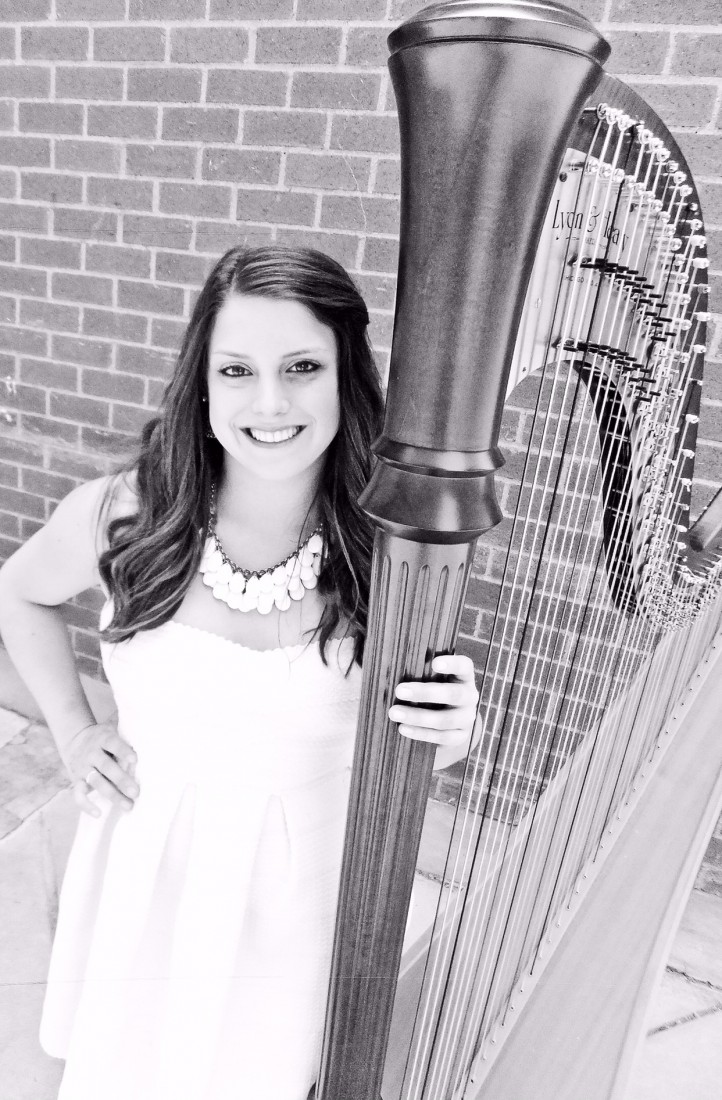 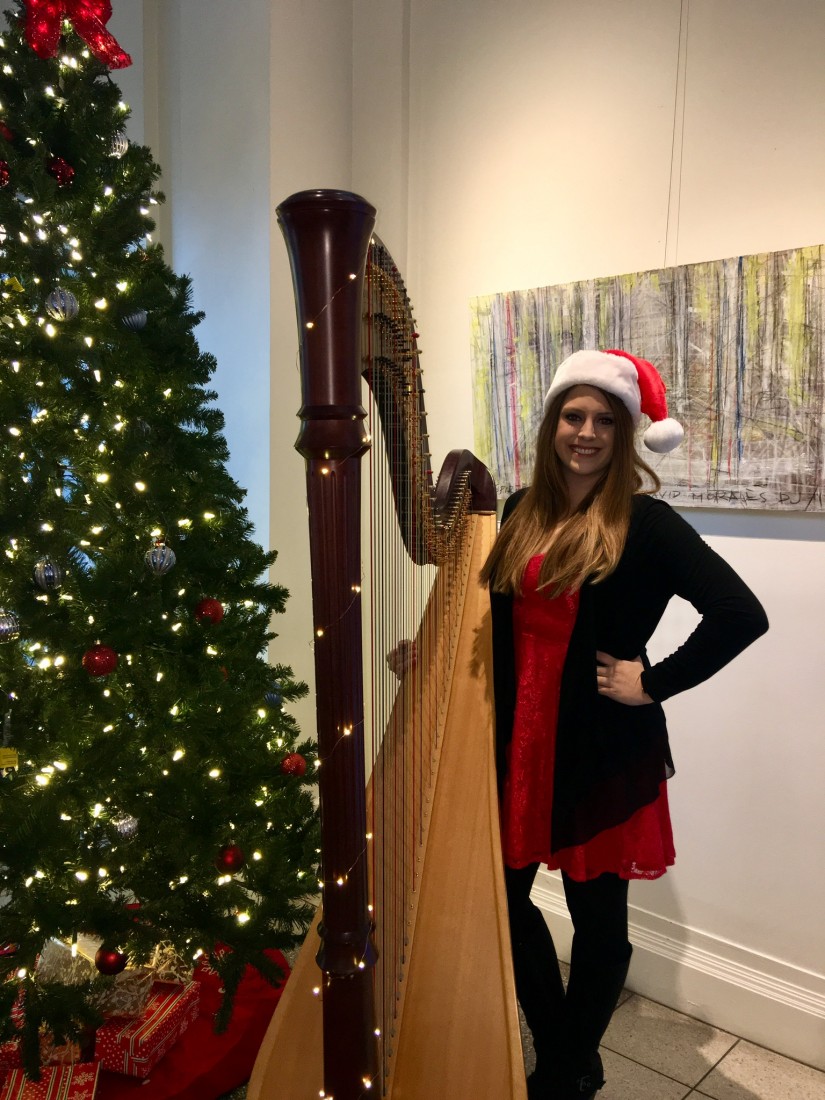 Lauren Hayes, harpist provides a touch of elegance and class to any event! Including weddings, receptions, holiday functions, teas or luncheons!

I'm SO LATE with this but I ALWAYS do what I say I will do! May the world now know that Lauren Hayes, Harpist, should definitely be hired without thought or question for her skill and natural fluidity with her harp. I requested her to play in my home for a sweet cozy homemade dinner with my Wife for our anniversary, including a little inclusion of a tune from Moana to make my Wife smile. Lauren learned it, played it and didn't miss a note. She filled the evening with gentle yet powerful music to create a blissful atmosphere. I'm a busy man and just wanted to enJOY the evening at home. It was all pleasant and serene. Lauren I'm going to pay you a "Sorry-I'm-so-late-with-your-review" tip!!!! Bless you and your hands!
E. L. Rogers II

I supply all my own equipment and do all of my own setup. I have a wide variety of music available and am happy to take specific requests as well depending on the occasion. I have various levels of formality to dress from ballgowns to formal black.

Harpist Lauren Hayes has performed, studied, taught, and successfully competed from Paris to Los Angeles. As an up and coming young artist, she has distinguished herself in the areas of contemporary music, chamber music, ensemble performance, and harp instruction. Most recently, Lauren was selected through national search to be a Harp Fellow at the Tanglewood Music Center for the summer of 2018 and worked with conductors including Andres Nelsons, Thomas Ades, and Stefan Asbury. Lauren received her Master of Arts in Harp with Distinction from the Royal Academy of Music (RAM) in 2016, under the tutelage of Karen Vaughan and Skaila Kanga. While at RAM, she also pursued an emphasis in Music Business as well as studying for the LRAM teaching certificate. After finishing her Masters, she accepted a position as a Teaching Artist with the Urban Youth Harp Ensemble in Atlanta, GA where she worked with more than 80 harp students. In 2017, she began her studies at the Chicago College of Performing Arts at Roosevelt University pursuing a Professional Diploma degree in orchestral studies in harp with professor Lynn Williams. In Chicago, Ms. Hayes is an extra musician with the Lyric Opera of Chicago, performing in their productions of Siegfried and Die Walkure in 2017 & 2018. Additionally, Lauren is serves as a Teacher for the Chicago Harp Ensemble, a piano and harp instructor at the American Music Institute and served as a teacher in the Harp Column Academy’s 2017 Summer Camp.
Following her 2012 Carnegie Hall solo debut, Ms. Hayes was awarded third prize in the 2013 American Harp Society National Competition. In 2015 she was named as a finalist in the London Philharmonic’s “Foyle Future Firsts” Fellowship Program for up and coming orchestral musicians. Prior to commencing her studies at RAM, she was selected to participate in the festival MusicAlp in Tignes, France for two summers. As a 2012 winner of the University of Arizona President’s Competition, Ms. Hayes appeared as soloist with the Arizona Symphony. Also in 2012, Ms. Hayes was selected to be a participant at the International Harp Master’s Academy in Bern, Switzerland. During 2011, she was selected as a finalist in the Coeur d’Alene Symphony Young Artists
Competition.
Originally from Whitewater, Wisconsin, Ms. Hayes has won various performance awards and received recognition at the state and national level for her solo composition for harp and electronics. Ms. Hayes has served as the Principal Harpist of the Athens Symphony Orchestra (GA), a substitute Principal Harpist with the Asheville Symphony Orchestra (NC), Augusta Symphony Orchestra (GA), and the Macon Symphony Orchestra (GA). She has performed with London’s Orion Symphony Orchestra, the Aldwych Sinfonia, the Saffron Walden Symphony, the Royal Academy of Music Symphony, the Royal Academy of Music Manson Ensemble (contemporary music ensemble), the Arizona Symphony, the Arizona Wind Ensemble, the Arizona Opera, the Sierra Vista Symphony Orchestra, the University of Wisconsin-Whitewater Symphonic Wind Ensemble and the Wisconsin Youth Symphony.
Hayes is also an active chamber musician. She is a core member of the contemporary chamber ensemble Chamber Cartel in Atlanta, GA, has been featured on the St. Peter’s Episcopal Church Chamber Music Series in Wisconsin, the St. Phillips in the Hills Chamber Music Series in Tucson, AZ, organized a chamber recital at the Janesville Performing Art’s Center entitled From London to Janesville, which was featured on Wisconsin Public Radio, and has given several USA premieres of new contemporary works by Dominic Murcott, Aaron Jay Myers, Anthony Donofrio, and JP Merz. Most recently Ms. Hayes recorded the music for “Brawl in Cell Block 99”, premiering at the Venice Film Festival in 2017 and recorded “Young Bloods” for the RADA Festival in London. Additionally she was featured in the premiere of Bruce Broughton’s new harp quartet, Dancing for Love, Dancing for the Gods.
In the summers of 2012 and 2013, Ms. Hayes studied extensively with Ms. Isabelle Perrin in Paris and has also studied from such internationally acclaimed harpists as Milda Agazarian, Skaila Kanga, Karen Vaughan, Sarah Bullen, and Judy Loman. In addition to

performing, she has completed two years as the intern for the London Festival of Baroque Music, working in marketing, PR, and concert management.
Ms. Hayes has been an active member of the American Harp Society, the World Harp Congress, Sigma Alpha Iota, and Mortar Board Senior Honorary. She frequently volunteers with the non-profit, Sharing Notes, that specializes in bring live music into Chicago-area hospitals. She holds a bachelor's degree, summa cum laude, in harp performance from the University of Arizona where she studied with Dr. Carrol McLaughlin. In her free time, Ms. Hayes can be found enjoying an espresso, attending music and outdoor festivals, discovering the world through travel, playing bassoon, or practicing yoga.

I need approximately 4 square feet of space to set up.