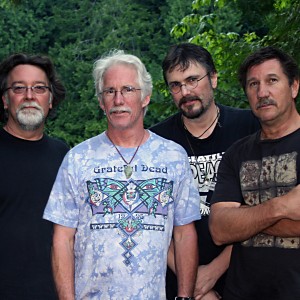 Since 1986, Kuli Loach has been the Northwest's number one choice if you want to listen and dance to a live band playing the music of the Grateful Dead. A typical show includes songs from every era of the Dead's 30 year career, plus original and other tunes by Bob Dylan, the Allman Brothers Band, the Beatles, Rolling Stones and more, all treated in the same improvisational rock n' roll style. Kuli Loach has performed in Amsterdam, several times in Whistler, B.C. and around the Northwest from Salem, OR to the Skagit Valley and all points in between. They also have three self-produced CD's of original music available for purchase.

Be the first to review Kuli Loach

There used to be a bumper sticker that said "There's nothing like a Grateful Dead concert". Jerry may be gone but the spirit of his times is what fuels a Kuli Loach show. Through a wide ranging selection from the Dead's catalog, the Loach recreates the vibe of an era gone by, and folks find themselves swaying and moving to the music and grinning at strangers and friends alike. Be it a 30 minute set or an all-night performance, Kuli Loach has built a longtime cadre of fans who will testify to a having a real good time at the Loach show. Check us out - we don't disappoint.

Kuli Loach is Seattle's longest running band dedicated to the music and memory of the Grateful Dead. Like the Dead, the Loach varies its approach to each song, avoiding note by note renditions of classic Dead tunes in favor of keeping the music flexible and always new. Formed in 1986, the core personnel (Ron Dickson songwriter, lead guitar, vocals; Mick Lane rhythm guitar, vocals; Mike Beaulieu bass; Ed Coke drums, vocals) stayed intact for almost 20 years, building a strong dynamic bond. With a new bassist (Larry Penoza since 2005) and drummer (Scott Jantzen since 2011) in the mix, Kuli Loach continues to take audiences back to the days of the Grateful Dead experience. The band also blends into their sets original songs and cover tunes by Bob Dylan, the Allman Brothers Band, Rolling Stones and many others. The band's extensive repertoire enables them to play three full evenings without repeating any songs, and can readily tailor a set for any occasion. A typical performance is two 90 minute sets plus an encore. For staging there is available a large (20'x20') tiedyed banner backdrop, and a liquid light projector.

Our setlist is totally dependent upon the occasion. With some 400 songs to pick from, we can tailor our show to your liking. We cover every phase of the Dead's catalog, from Golden Road from their first album to Black Muddy River in Jerry's final days. Ballads, rockers, cowboy tunes and the ability to weave them all together on the fly in a spacey continuum. That's what we do.