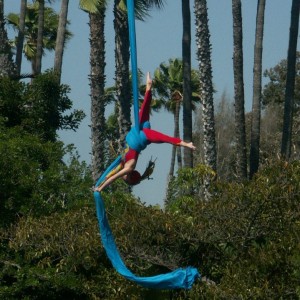 Kara Shriver is a professional aerialist, acrobat, dancer, and model. Available acts include, but are not limited to: aerial silk, net, chains, lyra, acrobatics, pole/ Chinese pole, stilt walking. Solo, duo, or synchronized acts are available, and can be specialized to fit the needs of the show. Available locally and world wide.

Be the first to review Kara Shriver

Born and raised in South Florida, Kara has always had a passion for the arts, beginning with her strong gymnastics background as a level 6 gymnast. At age 15, she began specializing in aerial arts, hand balancing, and acrobatics under the instruction of Russian Circus Legend Evgueni Baranok. She was a dance major at Dillard Center for the Arts. She has danced and studied under Jubilee Dance Theater, and was a dancer and specialty performer for Zhantra Entertainment. She has studied a variety of dance forms including ballet, pointe, modern, hip hop, and break dancing. She has even had the unique opportunity of dancing for the Harvey Nichols 2012 Fashion Show in Dubai. In addition, she was a model for Redline and VPX Sports from 2011-2012. She has performed at many different events and special occasions, including Lorenzo Martone's Nycked Fashion Show, and for celebrities like Dwyane Wade, Kim Kardashian and Jim Carrey. She has been an aerialist in Mimzy's Playhouse at The Colony Theater, Temptations Cabaret at Hard Rock Hotel and Casino, a dancer, aerialist, and model in Pandora's Box Fashion show, and has had the opportunity to perform at numerous clubs and events throughout South Florida. She was an aerialist and acrobat in Cirque De La Mer at SeaWorld in San Diego, and now lives in Las Vegas where she works as a performer.