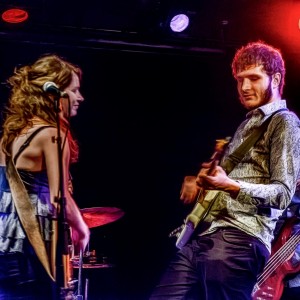 Juliana & Jesse is a brother-sister duo based in Montreal, QC, with a large repertoire of covers songs of all genres, including pop, funk, rock and blues. J&J is flexible to suit your needs. Not only can J&J be hired as a duo, but they can also perform in trio, quartet and full band formations (5 musicians, including drums, bass, keys). J&J will tailor each of their performances to your specific event, and will be happy to add in specific requests. With J&J, it's always a good time!

Be the first to review Juliana & Jesse

- A duo that will provide service to the highest degree of professionalism. Leave the work to us, so that you can focus on enjoying yourself!
-A tailored set list for your event, which can include specific requests.
-A mix of songs that span from the 1950's all the way until what you hear on the radio today.
-You can choose between an acoustic duo (2 voices, 2 guitars, light percussion), a trio, a quartet, or a full band (5 musicians, including drums, bass, keys).

Juliana & Jesse are a brother-sister duo based in Montreal, Canada. Raised in a Canadian-Brazilian family, Juliana & Jesse James Just Costa grew up between Montreal and Mexico. Juliana began writing music in the summer of 2013; she further developed her style and gained experience performing solo, and then with various Latin musicians. At the tender age of 13, Jesse was already a regular on Montreal’s rock scene, playing lead guitar and then singing, fronting his own outfit. Over the years Jesse matured as a musician and gained attention for his outstanding skill on his instrument, as well as in his energy on stage and ability to connect with an audience. After pursuing their individual endeavours into music, the two siblings began writing together in 2014, realizing that they were on to something. Jesse, 21, has already become one of the most gifted guitarists on the Montreal music scene. At 26, Juliana is a true, unique and colourful artist; her voice reflects her personality and warmth. The sound they have crafted is influenced by their interest for various musical styles, while their family heritage enables them to write songs in English, French and Spanish. Their rich and mature sound is folk-based, highlighted by Jesse’s tasteful playing, Juliana’s vibrant voice and introspective lyrics. Live, the duo is accompanied by a bassist, drummer, and keyboardist, and their large repertoire of cover songs from a variety of genres has allowed them to perform in all kinds of venues.

Since performing on the Canadian reality talent show La Voix (The Voice) in 2016, Juliana & Jesse have been featured and interviewed on numerous radio stations, such as CHOM 97.7 FM. The duo continues to showcase their talent in a variety of venues across the province. In their first two years, Juliana & Jesse have already played over 400 shows.

Their first full length release “In Time” marks a coming of age of their project. It is a collection of songs that are thoughtful and introspective; the vibe of the tracks is at times nostalgic, fun and upbeat, as well as socially engaged. The listener gets some impression of familiarity: a natural connection to their music. “In Time” succeeds in being simply easy and pleasant to listen to. Juliana & Jesse travelled to Vancouver, B.C. to record the album at The Red House studio with Juno Award nominee Sid Perez who produced the album. The lead single and video for “Getaway” will be serviced to radio and video outlets across the country this fall. Juliana & Jesse’s “In Time” will be re-released through Unda In Choc/Believe Digital in early spring 2018, and will include bonus tracks. The singer-songwriter siblings will hit the road to promote the release of the album through 2018 and 2019. Their first dates will bring them on a 15-date tour of Italy in March 2018, followed by a performance at MIDEM 2018 in Cannes.