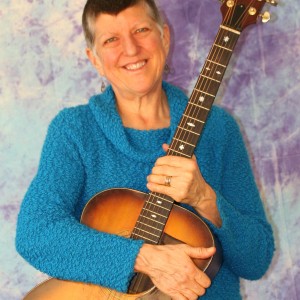 Judy's love of American Folk Music and instruments shines through at every performance for children, families and adults! Working for over 30 years as a professional musician Judy uses familiar folk songs and originals that have everyone singing along while they learn about folk music. She plays over twenty instruments. Guitar, banjo, balalaika, dulcimer, penny whistle, jaw harp, spoons, washboards, nose whistle and more! Her programs can be tailored to any theme or event. She knows thousands of songs about everything from bugs to the zoo, the environment and reading! Her specialty is children under 5 years of age and children/adults with special needs.

Judy was such fun and had a perfect rapport with the children! She was fun, educational, and made everyone join in with great big smiles!

Judy Stock has been a performing musician for over thirty years. Born in Manitowoc, Wisconsin, she lived in New Orleans for thirteen years, then moved to Sheboyan Wisconsin, made a brief stop in the Dallas/Fort Worth area for one year and now makes her home in Ithaca, New York. Starting with the clarinet as her first instrument she now plays over 20 different instruments from around the world. In all her performances with children she shares many of these instruments along with her love of reading. Early literacy has become Judy’s focus in the past 4 years and her work with preschoolers is now her passion. She is committed to keeping folk music and folk instruments alive in the hearts and minds of children. Judy shares her talents with educators and students in her workshop “Anyone Can Make Music” and offers artist residencies to children in songwriting, instrument making and folk music through America’s history.
Throughout Judy’s musical career she has been in a variety of bands and duos performing all types of music for adults. She still enjoys performing for adults as often as possible for special events, clubs, organization, retirement centers and giving concerts at libraries and churches. She is currently working as a Religious Education Minstrel at the First Unitarian Society of Ithaca teaching songs of peace, love and tolerance to the children attending the Sunday classes.

Judy performs for libraries, schools, day care centers, festivals, churches, organizations, and many other events in Texas, Wisconsin, New York and New Orleans. Since 1998 she has been performing at the New Orleans Jazz and Heritage Festival in the “Kid’s Tent” on a regular basis. A video of Judy was seen around the world on a 1998 episode of “Oprah” where she played her nose whistle and spoons for Oprah's show entitled, "Oprah's Funniest Viewers". She has released 2 CDs and a DVD that are well loved by children and adults.
She is currently working on recording her new children’s CD and her first CD for adults.

In 2012 Judy conceived, produced, filmed and acted in the television program “Jammin’ with Jerry and Judy”, where she interacted with her friend, “Jerry - the beaver” in teaching early literacy skills through music, instruments and books. Judy won 2 local awards, Best Cable Access show and Best Magazine Format at Pegysus Cable Access Television in Ithaca. In May of 2013 Judy was recognized in the San Fransisco Hometown Media Awards in the category of "independent producer" for Best Children’s Program. For more info click on this link: (link hidden)

While living in Sheboygan, Wisconsin she produced and directed a cable television show for preschoolers, “Miss Judy presents: Music and Motion”. This show was awarded the “Award of Excellence” by the 2007 WAPC Video Festival in Madison, Wisconsin.

Ms. Jones is a stand-up comedienne/host. You've seen her on BET's "Coming to the Stage" hosted by Bruce and judged by Kim Coles & Kevin Hart. She…

Jocelyn Q. said “Highly recommended my dad enjoyed his 50th birthday the mariachi band did an excellent job and they were on time.”