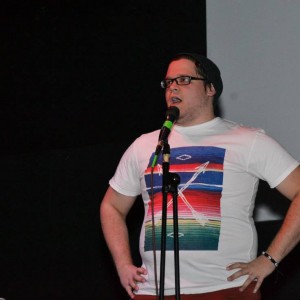 Josh Lathe is a stand-up comedian has been entertaining audiences for last 4 years with his unique blend of energy, anger, and anxiety. A rather anxious person off-stage becomes a whirlwind of nerd humor, historical comedy, embarrassingly true stories, and awkward commentary. Josh is perfectly at home onstage and a big hit with college crowds. He has performed all over the country and opened for outstanding talent. He is a true comedic performer, having honed his skills in improvisational comedy with the fantastic Oak City Comedy, and also appearring in a number of independent films. Josh is quickly becoming a must-see performer.

Be the first to review Josh Lathe

My shows aren't a standard set-up, punch line format. Its more like hanging out with your weird friend and listening to them rant. You can expect a lot of energy, a lot of fun, and a lot of audience interaction. I like to let my shows be fluid. I build to a frenetic pace and never look back from there.

I just a mic and a room thats ready to RAGE

I'm a big fan of absurdist humor and story tellers. My two biggest influences are Eugene Mirman and Mike Birbiglia