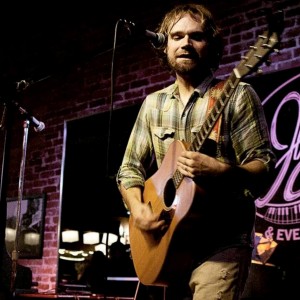 Josh Jennings is an award winning singer/songwriter. The Josh Jennings Band performs all original folk/bluegrass toe tappin music that connects to the soul, through life experiences. Like pages out of a journal, his lyrics will make you laugh and cry in the same song.
The Band is made of two acoustic guitars and a stand up bass. Flat picker, Bob Alexander, has his own unique style of lead guitar that is amazing to watch. Stand up bassist, Kris Hurt, lays down a solid bounce with his walking bass.
Josh Jennings has two cd's available on Pandora, iTunes, spodify...etc

Be the first to review Josh Jennings Band

My first experience hearing a Josh Jennings performance was a tribute song to an old car he didn’t want to sell. The vehicle contained memories in each dent and on the old radio from times he drove it through farm fields with a new love at his side.

“Oh, I’m drivin’ farther than I’ve ever drove away…”

Jennings, of Neosho, is a prolific songwriter and draws inspiration for his lyrics through his own personal life, painting a verbal portrait of a moment in time. Miracles, tragedies, everyday occurrences all provide fodder for the lyrics that Jennings spills from some magic well deep inside his soul.

“Each song is like a page from my journal,” he said. “Personal experiences, good or bad, are the basis of each song. When people ask me what happened in my life to inspire this song or set of lyrics, I turn it around and ask them what the song means to them, because that’s the important thing – how it resonates in their own life.”

Jennings, a self-taught musician, has been writing songs for about 15 years, but it wasn’t until he teamed up with Bob Alexander, of Pierce City, that the music and lyrics jelled into a cohesive sound, and within a matter of weeks, the duo was booked at Joplin’s hot spot, the Kitchen Pass.

Word of their unique Americana sound soon spread through the musical community and they found themselves booked again and again by clubs, such as JB’s Piano Bar, Webb City’s Farmers Market, Patton Alley Pub in Springfield and Undercliff Restaurant in Joplin, where fans were requesting performances.

“It’s nice to be able to play some of these venues and get our music out to a new audience,” Jennings said.

Their combination of flat-picking and finger-picking styles mesh into an energetic, down home sound that runs through their brain even when the mics are shut down and the lights turned off. Occasionally, the duo is accompanied Kris Hurt on upright bass.

Catchy lyrics seep into the soul and each listener finds his own message.

“It’s been so long since I have found the certain kind of love that comes once in your life,

“But it’s lost in time tonight.”

Jennings and Alexander initially met on the banks of Shoal Creek at a “coyote camp” near Jolly Mill, in Newton County, where musicians gather for regular jam sessions.

“It’s a party place for musicians to jam,” said Alexander. “We met last fall when a friend of mine introduced me to Josh. After awhile, we broke off from the main group and played together, developing a connection and within a few months nailed down this sound that has become something special.”

Before the two had practiced together long, they went to Ozark Syndicate Records, a recording studio in Granby, and laid down what they thought were going to be demo tracks for a future CD. Studio owner, Terry Weaver, tweaked the mix and then uploaded the songs to such sites as Spotify, ReverbNation , iTunes and Amazon.

“We did everything backwards,” Alexander said, “but it has worked for us.

“Josh is such an amazing songwriter,” Alexander continued. “That’s what makes performing with him so much fun.

“He’s even taken a couple of song I have written and worked on them, and brought them into the style we’ve developed and made them better. Hearing someone else, like No Apparent Reason, another local band, covering your song, wow. That’s cool.”

The band plays all original music, opting not to cover other artists’ work, and today’s digital technology, getting the musical compilations out into the public’s ear is much easier than 10 years ago.

“The world of the independent artist has really opened up,” Weaver said. “Technology has given the opportunity for the average singer/songwriter to get their stuff out into the world. Ten or 15 years ago, that wouldn’t have happened. You’d have to be backed by a major label.”

“We’re excited about the doors that are opening to us,” added Alexander.

The bulk of song downloads from the Internet have so far tracked in the four-state region.

“That could change,” added Weaver. “You never know. They may submit material to South by Southwest or Austin, Texas, and have their work showcased.”

The duo has also been chosen to play on Pandora, a free Internet radio program that allows users to craft their own libraries of musical interests.

So far, the duo is managing most of the particulars concerning their careers themselves, but it’s getting more difficult as their booking schedule fills.

“Managing all of the Internet stuff is time consuming, too,” added Alexander. “Making phone calls, sending e-mails. Promoting and booking is a new challenge for me. Terry has given us a lot of pointers, but we still don’t have enough time.

“And playing is really what we do,” Alexander said. “I love to play. When you get out and play in front of an audience, it’s like building a racecar and finally getting it on the track. The audience elevates you.

“When we’re being booked to perform three or four times a week, it’s becoming apparent that this could become real,” Alexander said.

Their first CD, Ol’ Car, sold out its first order run and a second run has been ordered.

The duo is currently working to develop material for a second album, "Toe Tappin Tagedy's"

“This is the first time in my life I feel like I am where I want to be,” Jennings said. “I’m happy to be right where we’re at right now. I’m ready to cash in all my chips on this.”.