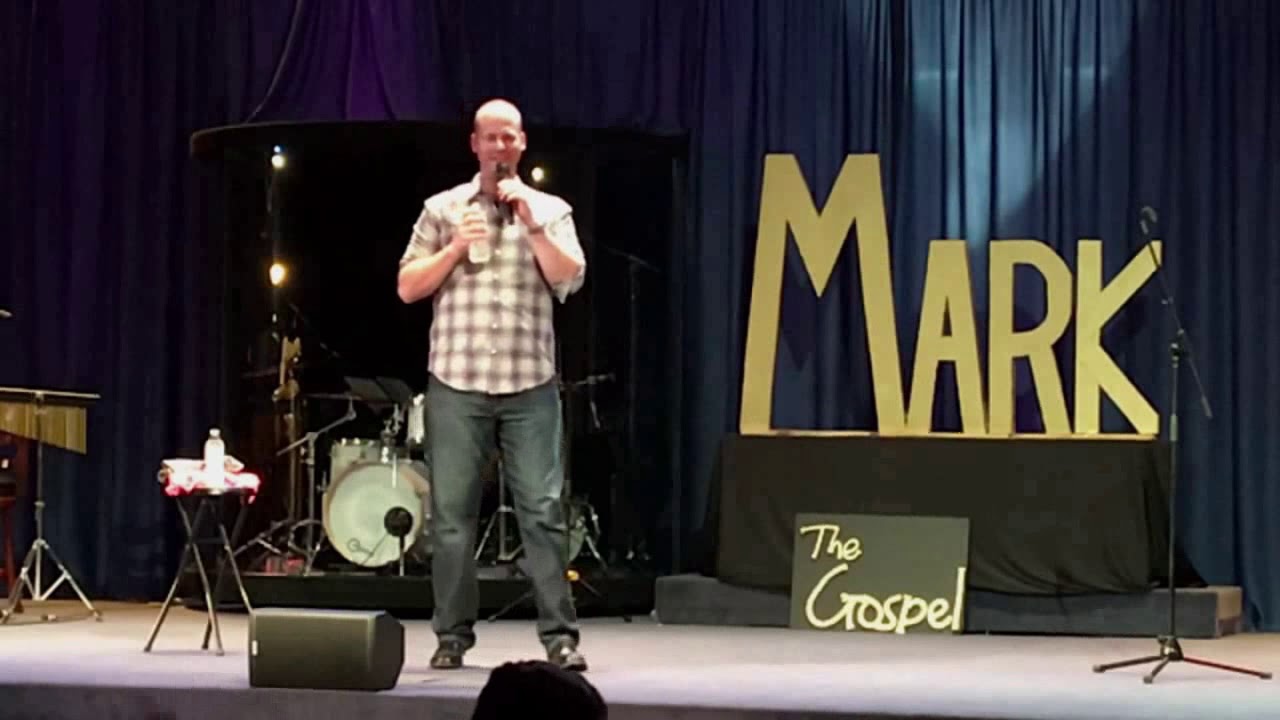 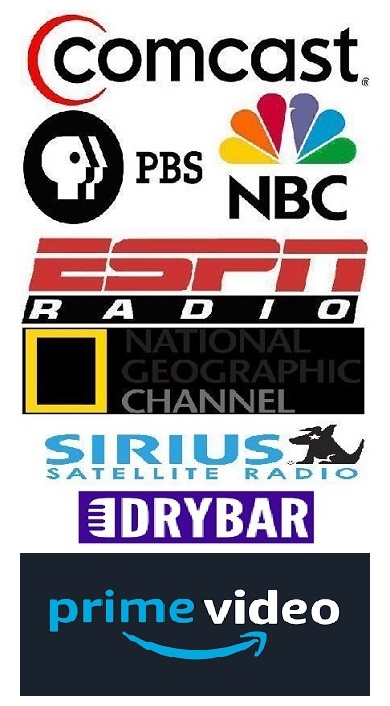 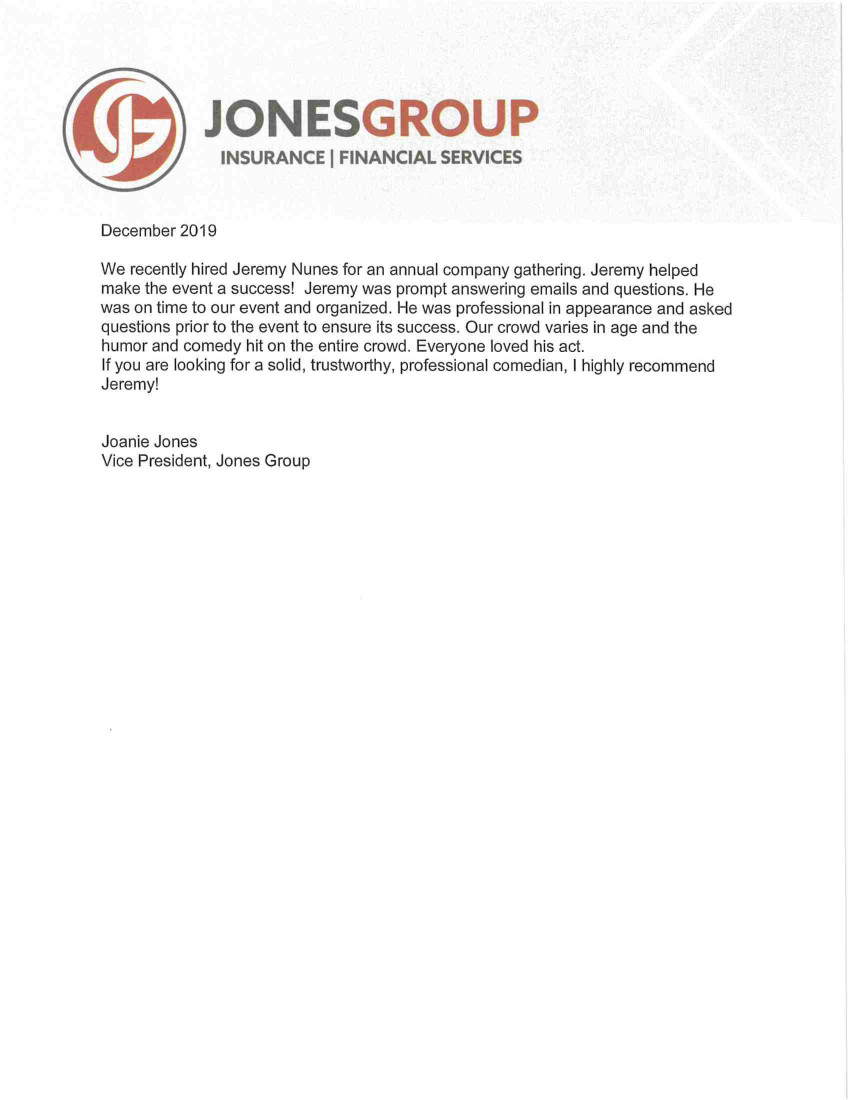 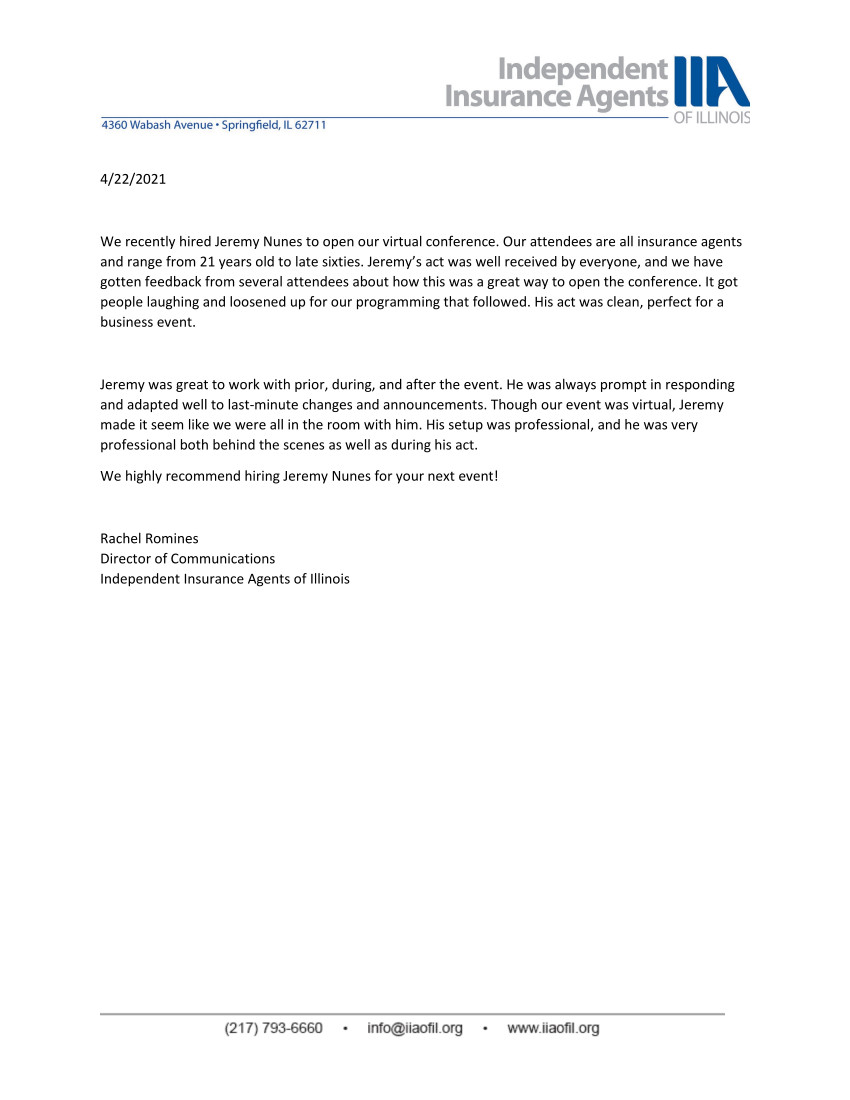 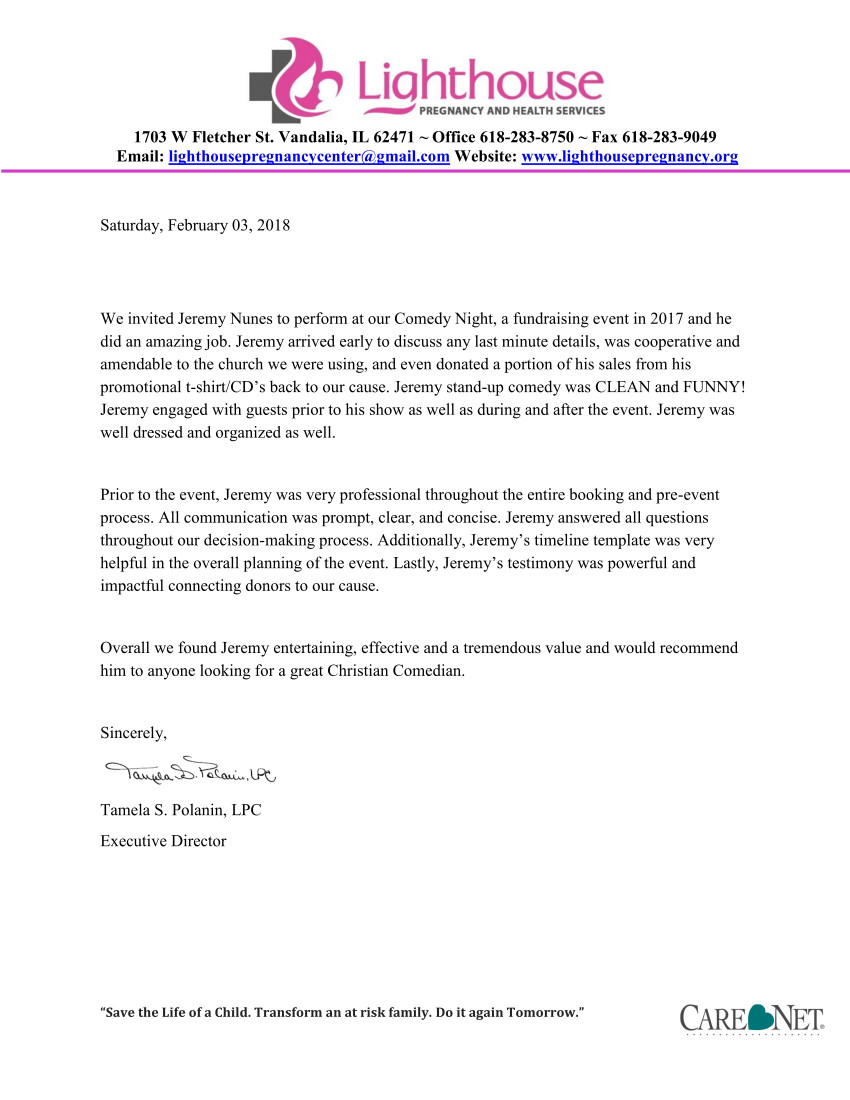 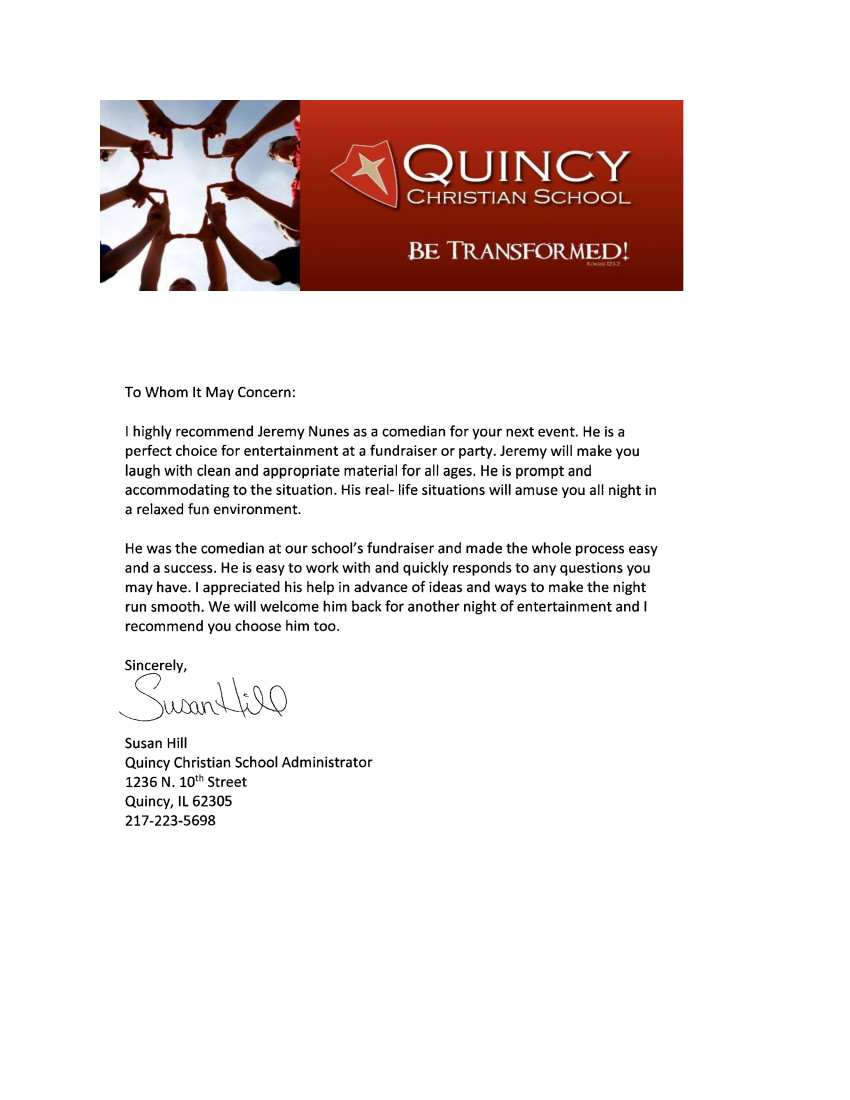 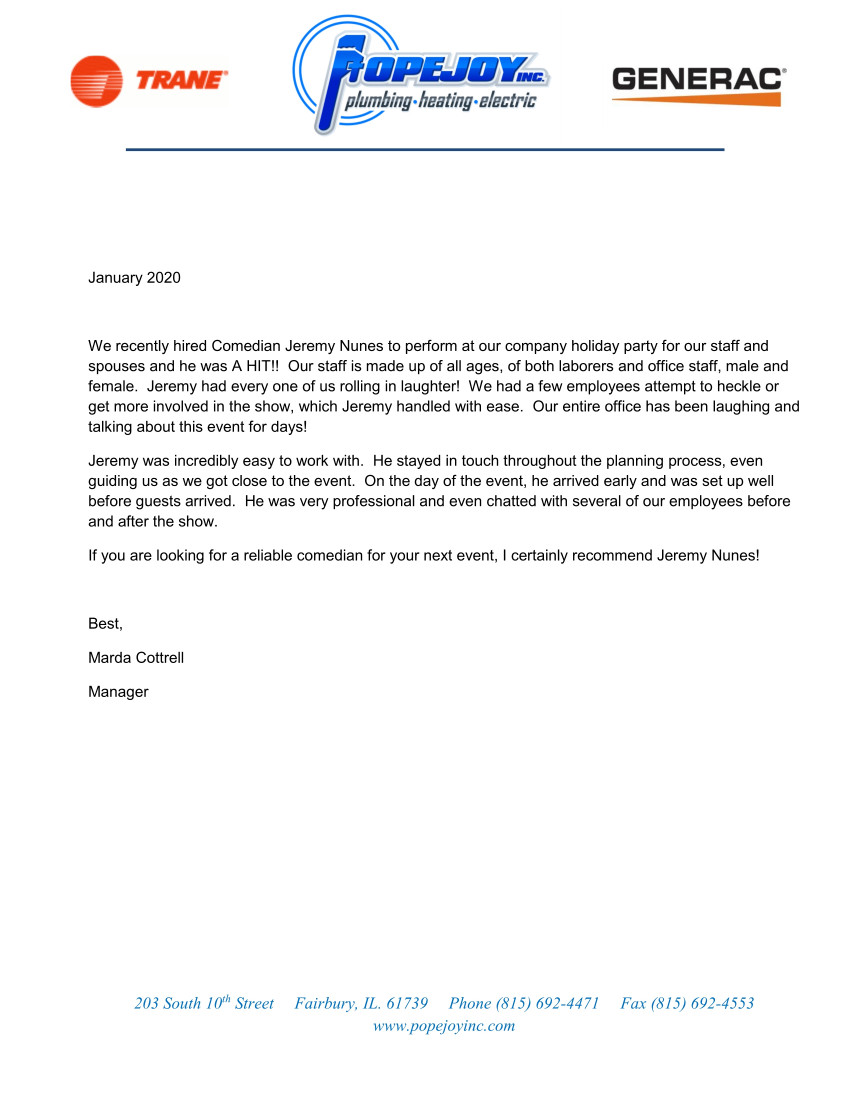 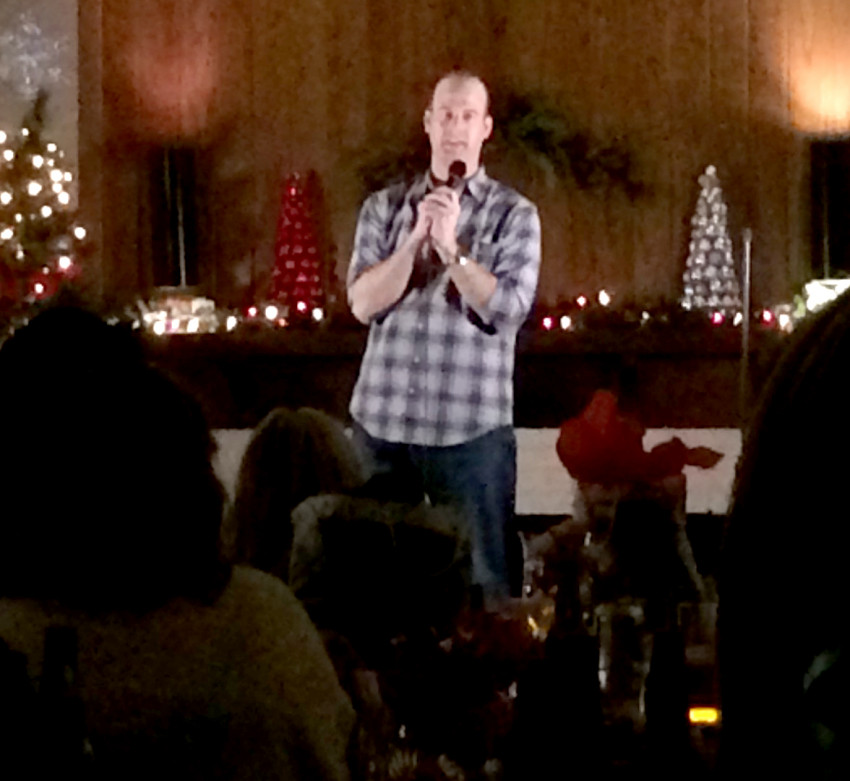 Jeremy performs at churches, corporate events, fundraisers, charity events, country clubs, and much more. Nunes has a unique twist: he was elected mayor of his hometown, and even wrote a best-selling book about his experience titled "You Can't Write City Hall."

For 20 years Jeremy has been joking about rural life, being a small town Mayor, marriage and raising kids, his goofy Dad, and singing funny songs. You can't go wrong with a "Best Comedian" winner for 7 years running!

Jeremy was a true professional from start to finish. He communicated very well leading up to the event and on the evening of the event his comedy was superior.

Great evening with lots of laughs!

Jeremy was very pleasant to work with, met every contractual agreement and offered above and beyond. Our audience age range was broad, children to adults, but everyone was entertained! He was funny, relatable and the evening was a success!

I hired Jeremy to come in for my company's client appreciation banquet. This was a wide range of both white and blue collar clients, as well as a wide range of ages. I was a little nervous about how a comedian would appeal to such a wide variety of audience members. Jeremy was fantastic!
He was in touch with me in the weeks leading up to the show to make sure we had everything squared away and finalized. He was very easy to work with and polite and professional. Of course, his show was also very funny!
With the success of our event, I recommended Jeremy to my church when they were looking to hire a comedian for an event. They hired him, and that show was great as well. I would definitely recommend Jeremy for a comedy show.

Thanks for your help with both shows, they were both a blast!

Great show! Plus was amazing to work with!

Jeremy made our event great! He not only advised me on ways to make my event a success (as it was my first comedy show), he got us some free press, and even got an opening act for us! I am glad I hired him and am already planning our next show!

Wonderful Comedy for Everyone

We had an honors night for our volunteers at our church and Jeremy was a perfect fit for the night! Great jokes and great night! Everyone enjoyed!

Was Recommended to Me, I'm Recommending to You!

My colleagues and I have hired Jeremy for multiple events. He was recommended to us by a group that had used him for a fundraiser. We've since had him perform at our church, my friend's company event, and a youth sports fundraiser. We recommend him to anyone that asks. He's professional and has a clean and funny show.

Jeremy was great! He’s funny, professional and friendly! The comedy night was well received by our church and it provided something unique for us to offer our church family!

Jeremy's clean comedy act was a big hit at our Christian conference. The jokes were great and the timing was perfect. What I really liked was that he ended the act by giving personal testimony. His act helped make the whole event better by breaking the ice and getting everyone comfortable and ready to hear the main speaker's message.

Jeremy performed recently (6/20/19) for our group and absolutely nailed the performance! This was an absolute perfect way for us to end a long day of industry speakers and meetings. Throughout the process, Jeremy was an consummate professional; paying close attention to details and following up to make sure we had all that we needed for the show. I highly recommend Jeremy and know that you will enjoy his performance! Thank you, Jeremy!
Kris Kline - President, Society of Financial Service Professionals (Central IL Chapter)

Jeremy did what we asked him to do, which was to provide our ladies night out with a good, clean comedy show. He was good, but didn't seem to connect with the ladies as much as I thought he might. I actually thought some additional crowd interaction might have gotten a bit more energy in the room. Nevertheless, I would certainly recommend him for a performance in your church or club or group.

Our apartment community party was a big success! So many residents came up to us to tell us how much they enjoyed Jeremy! Lots of laughs and worth every minute! Baytowne would recommend Jeremy for any event!

Jeremy was hired for our family night celebrating Lutheran Schools Week. He is very professional and flexible to our setup and easy to work with. Those in attendance raved, "A good laugh is just what I needed tonight"

We loved having Jeremy. From the start of the process until the end of the show Jeremy was a professional and excellent communicator. He has a passion for people and not just his bit. His passion comes through as he brought joy, laughter and smiles to our event.

Thanks Jason, it was a great event!

Very easy to work with. The presentation was for a church group and was very very fun and very clean. We were laughing so hard it hurt!

Thanks Brian, it was a blast!

Jeremy was a rock star! Super easy to work with and had a great CLEAN performance. Everyone thought his routine was hilarious and well planned. He performed at our Christian company event so it was imperative that the routine was clean and it was! Would def recommend and hire again for future events. You will not be disappointed if you book Jeremy for your upcoming event.

We were a bit nervous booking a comedian for our company's holiday party, as we had never booked entertainment before. We wanted a show that would appeal to a staff of around 30 while keeping it clean and professional. Jeremy hit the mark! He was so easy to work with prior to the show and he was the perfect fit for the clean comedy performance we hoped for. He interacted with the audience through a game show routine that got us out of our seats and laughing together. This was definitely one of our most memorable holiday parties. We highly recommend Jeremy for your company gathering!

We hired Jeremy to perform at our lodge and everyone loved him! We knew he was a cleaner comedian, so we were a little concerned that a clean show wouldn't work with our audience. He did great! His show was clean, but it was amazing how he worked it so that no one really even recognized they weren't getting a dirty show! His show was loved by all of our audience, and we would definitely recommend hiring him. He helped us plan and organize the show, and really urged us that if we followed through with his suggestions, everything would be great. He was right, awesome!

We had the pleasure of having Jeremy perform at our annual comedy dinner and dance night. We had over 300 guests and all had a great time, and of course laughed a lot!!!! We would recommend Jeremy for any event.

Thanks Tanya, it was great!

We hired Jeremy for our first Church's first comedy night. He was very funny. I also recommend the gameshow which is hilarious! A very good guy, delivered everything as promised.

Thanks for the review! Had a blast!

Jeremy performed at our company Christmas party. He delivered everything as promised. A funny clean show - on time - polite - even let us use his sound equipment at no charge! I absolutely recommend him.

Thanks for the review, had a blast!

Audiences can expect a solidly funny show that is completely clean. Amazingly, even tough, bar audiences have been left rolling in the aisles to this clean show. There are two reasons for this, both written about by reviewers. First, "Jeremy's show is so hilarious that typically 'dirty' audiences overlook the fact that its a clean show. Jeremy proves that funny is funny, regardless of where you are." Second, "Jeremy connects with audiences on an emotional level unlike anything I've ever seen. Its more than just setup - punchline - laugh. He connects with the heart of his audience and doesn't let go."

Jeremy has a our highest rating, 5 stars, based on feedback from clients like you!

This clean comedian has appeared in "The Layover", "The Break-Up", "Last Comic Standing", "Final Witness," 2 PBS mini-series, Comcast on Demand, a National Geographic Special, and heard on ESPN Radio and Sirius XM Satellite Radio. He got his start by winning $200 in a local comedy competition. Soon after, the 6'6" comedian left the rural, Southern Illinois life behind to explore the comedy scene in Chicago. Once in Chicago, it was at The Second City Comedy Theater that he first developed the “Front Porch Comedy" that is now a staple of his act.

He has since returned to his rural hometown where his parents manage a trailer park. Though he really wants to cash in on that goldmine, he continues to tour instead. Well, he tours when he can, because he got elected mayor of that town! He even wrote an Amazon best-selling book about his experiences called "You Can’t Write City Hall." Audiences are treated to observations of rural life and working as a small-town Mayor, tales of marriage and raising kids, and plenty of stories about his wisecracking Dad. Plus, hear the jokes that put him on the Bob and Tom radar!

The performer has preferences but nothing mandatory. These can be discussed and arranged as needed.

Set list is often improvised based upon the audience's makeup and reactions. Contact the performer for more information.

The performer has preferences but nothing mandatory. These can be discussed and arranged as needed.