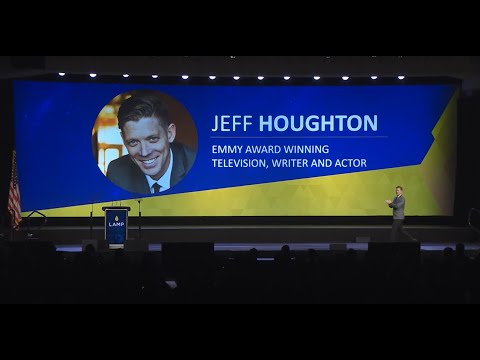 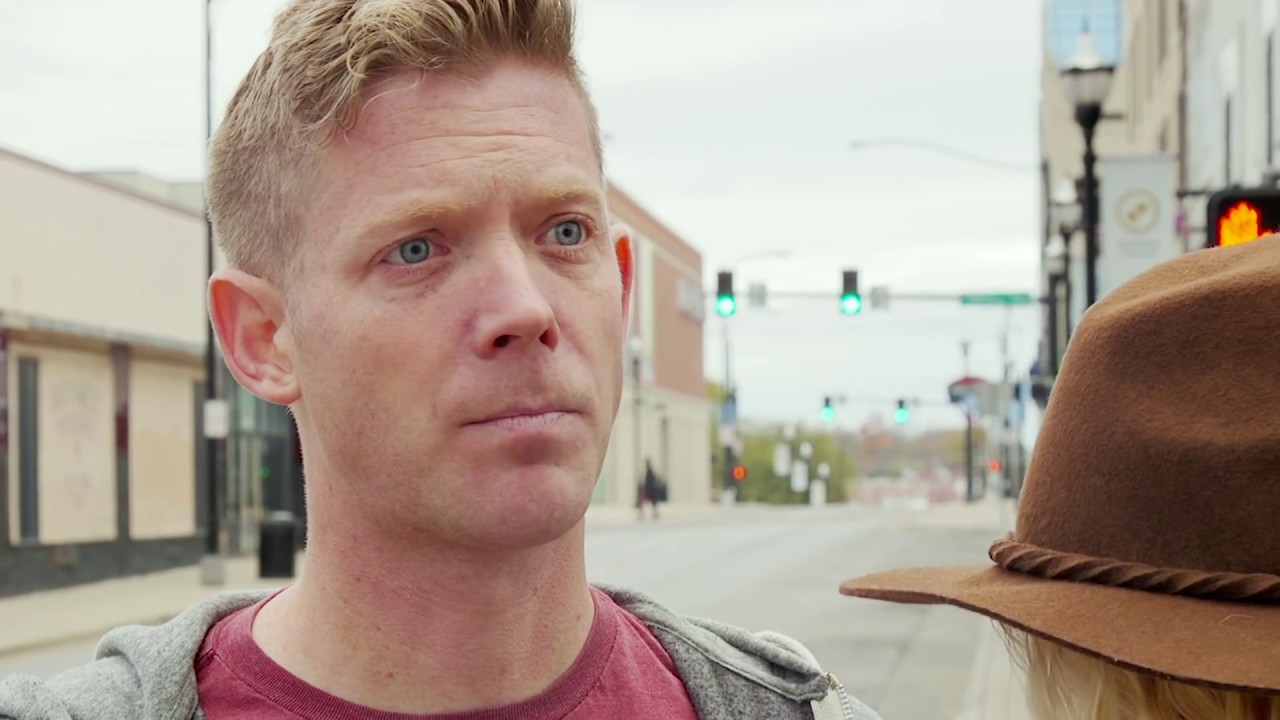 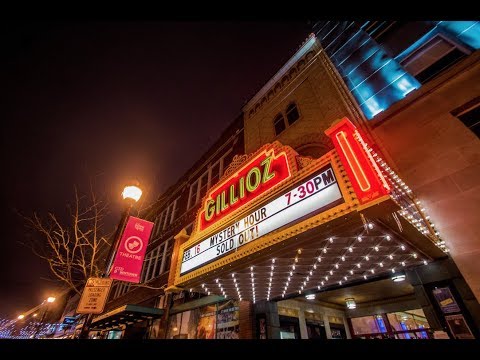 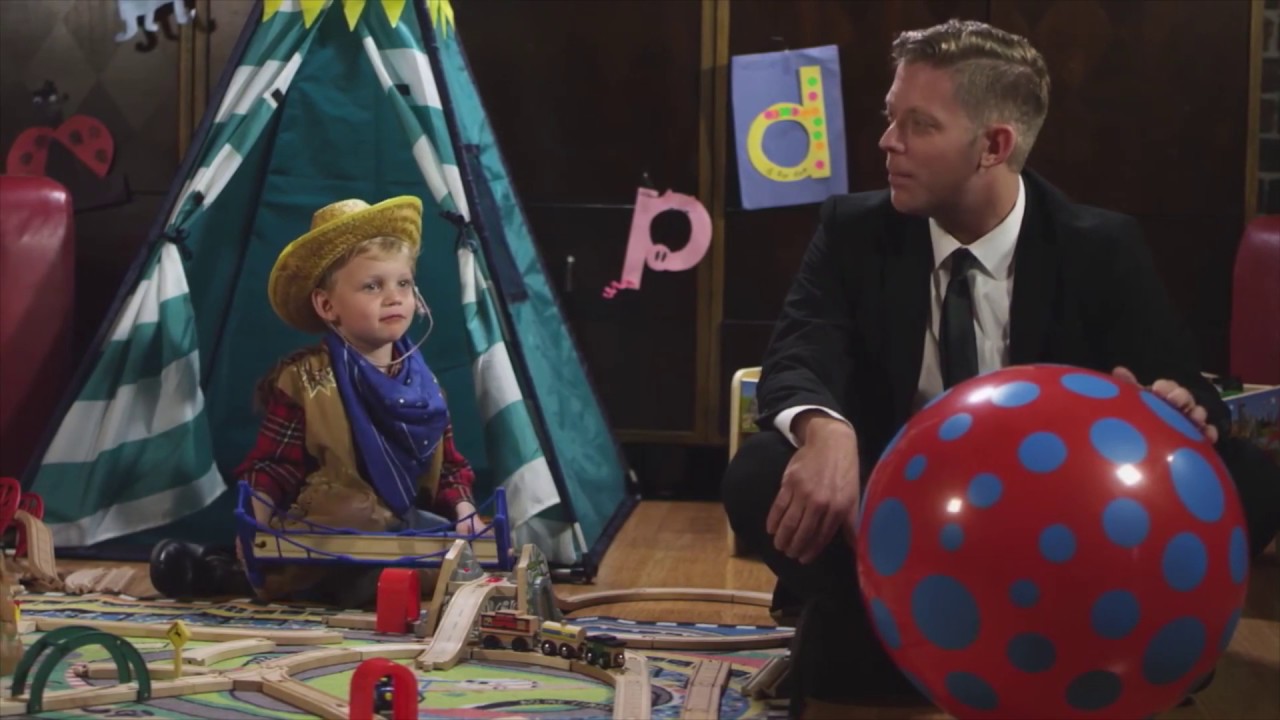 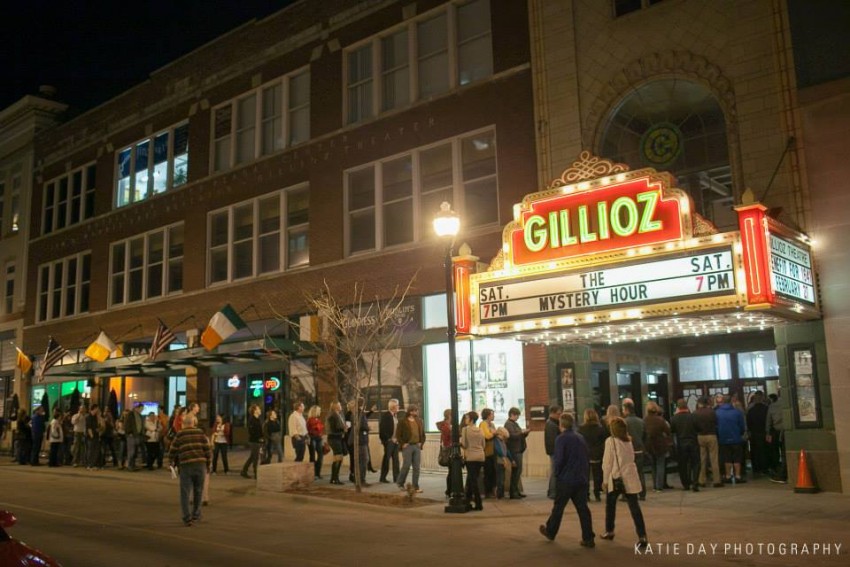 A line to get into The Mystery Hour 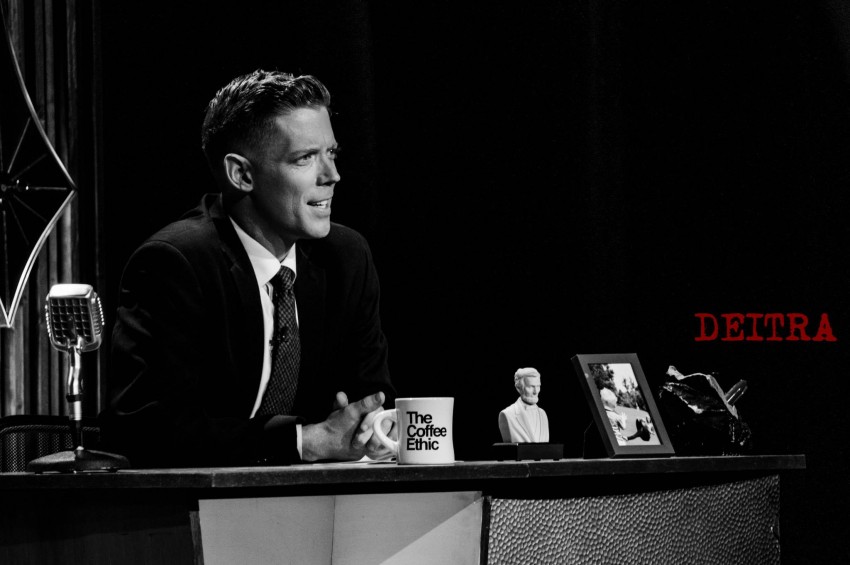 Jeff at his desk Jeff when the show is going 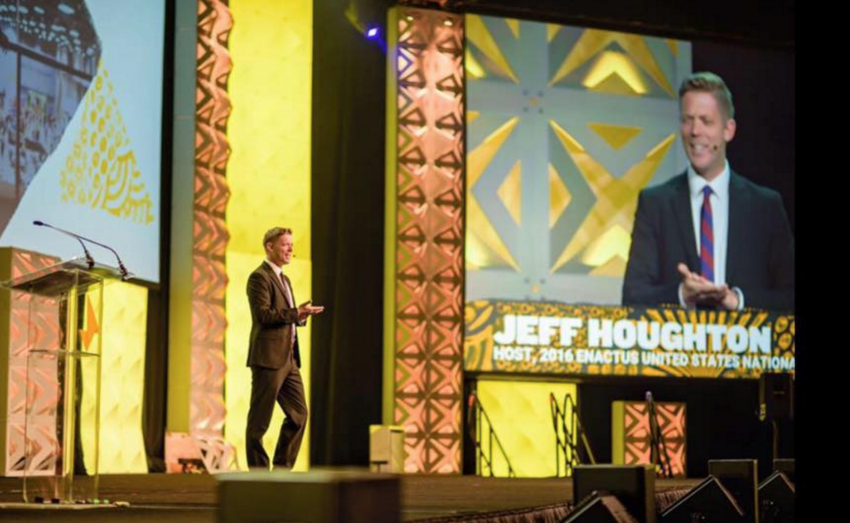 Leading a marching band, because of course. 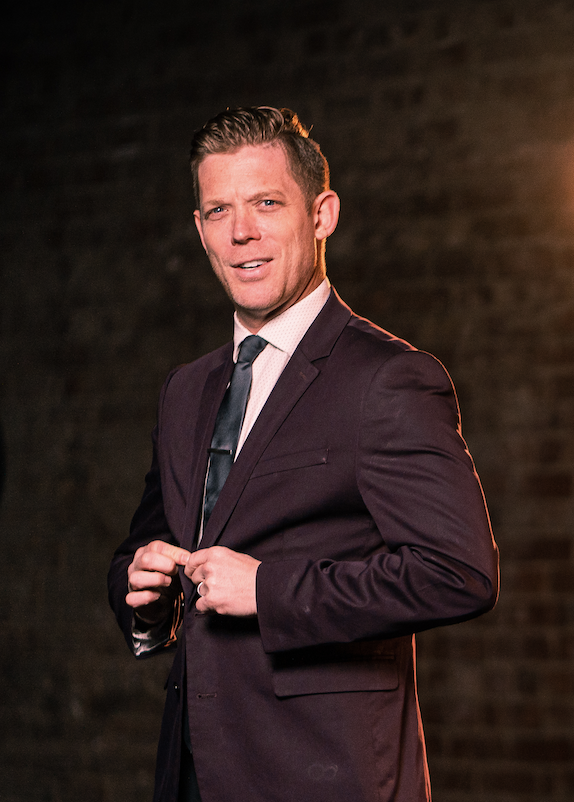 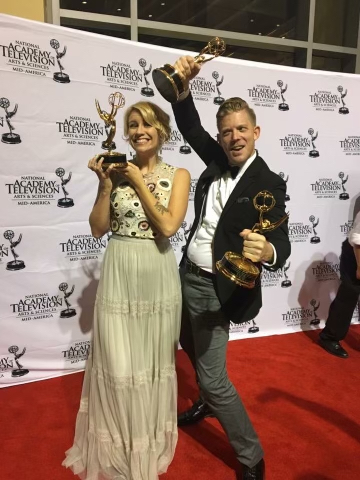 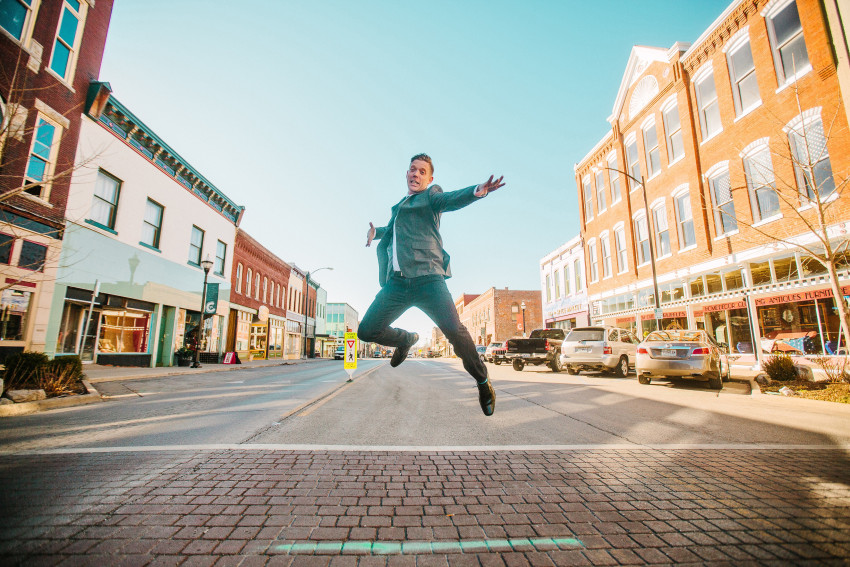 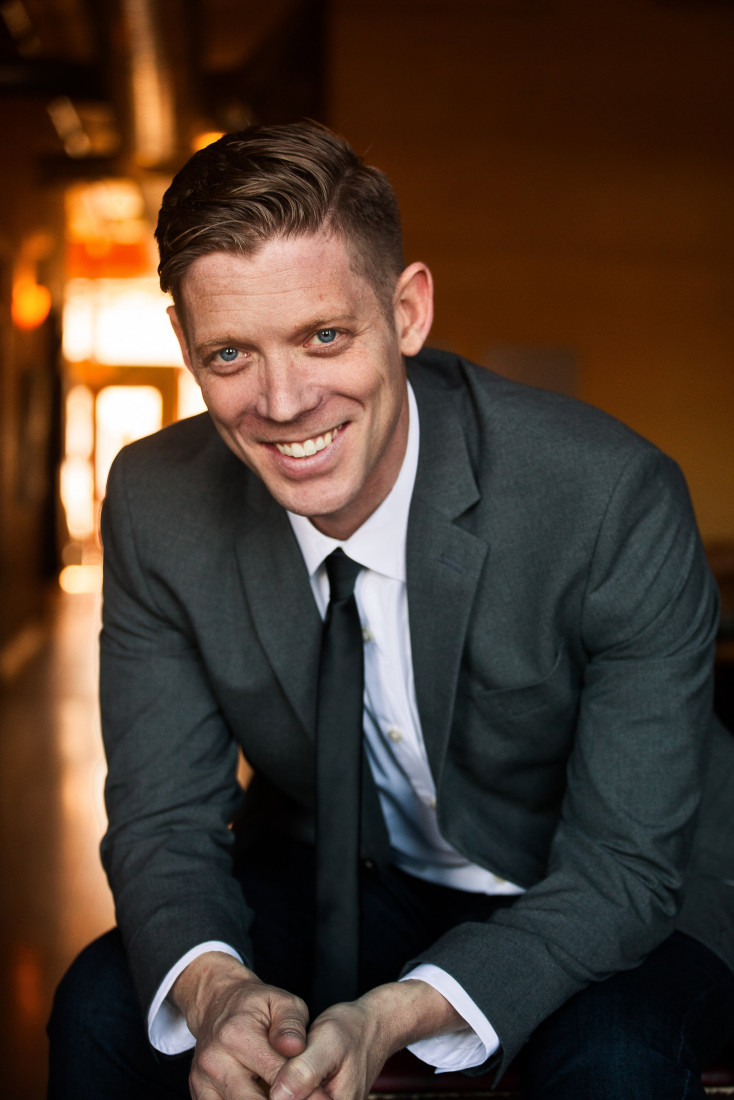 Jeff Houghton is an emcee, TV host, & comedian. He is a 4 time Emmy winning host of the late night talk show, The Mystery Hour, which aired on FOX, NBC, & ABC affiliates around the country. Jeff and his work have also appeared on CNN, BBC, HuffPo, NPR, & more. Jeff is known for a quick wit, an uncanny ability to read the room.

Jeff travels internationally and has worked with brands like Walmart, Aflac, H&R Block, 7-Eleven, & Fossil. He has hosted fundraisers that have raised more than $100 million.

Jeff worked at the Late Show with David Letterman, and has more than 17 years experience in improv. Many recognize Jeff from the viral hit, Instagram Husband, with more than 60 million views.

Brilliant roast of the half century!

We hired Jeff to do a 50th surprise birthday party "roast" and he was outstandingly hilarious! His highly creative talent is remarkable and our entire family will be forever fans!! He is naturally funny and able to think quickly on his feet!! With our family's nonstop laughter and constant "verbal interaction," he had witty comebacks and easily responded to all the unexpected chatter. Jeff knows that timing is everything and he does a stellar job with delivery.

Jeff also has an excellent team who was an integral part of the show. They all work wonderfully together-their improv is exceptional and everyone was genuinely nice.

We appreciated Jeff's professionalism, enthusiasm, organization, punctuality and flexibility. Flexibility being key with this surprise, out of state party. All of our communication with Jeff was via email, one conference call and one face to face meeting a few days before the show. We sent him numerous stories and photos about the birthday gal and he produced a "roast" as if he had known her for years!! He took an obscene amount of information and prepared it so appropriately that we will be laughing about this party for years to come.

Thank you, Jeff, and to your cohorts for the most memorable 50th ish roast ever!

Jeff will happily work with you to make your event great. He'd be happy to listen, collaborate, and come up with a plan specifically for what you need. If you don't have a full plan yourself, Jeff can also come in and bring the funny no matter the circumstances. His goal is to help make an event fun, funny, and do it in such a way that everyone feels a part of it, and you feel comfortable that everyone can feel comfortable with the performance.

Jeff Houghton is a 4 time Emmy award winning host and comedian. Jeff has unlimited range for any event, all with a warmth and friendliness that doesn't sacrifice an ounce of razor sharp wit.

Jeff won Emmys for hosting, The Mystery Hour as a program, and for Instagram Husband. Originally from Iowa City, IA, Jeff has lived in New York City, Los Angeles, and Springfield, Missouri, where he is based now.

Hosting
Jeff hosts The Mystery Hour, a syndicated late night talk show that appears on FOX, ABC, NBC and CW stations. It began as a live show 10 years ago that became an underground phenomenon that is now wildly successful television show in it's 10th season. He gained experience in the industry working for the Late Show with David Letterman, appearing in nationally televised sketches.

One of Jeff's favorite things is to customize The Mystery Hour for a particular audience. He has done this for events ranging from corporate events, to company holiday parties, to large fundraisers. He can interview who you choose, have a musician from your area perform, and create humor around your company/city/loved ones. A real late night talk show just for your event??? For real. Believe it.

Jeff has hosted countless events large and small across the country in the role of emcee, and is skilled at listening to your needs and integrating his talent into what you want.

Improv
Jeff began performing improv with The Skinny Improv in 2004, performing to great crowds every Friday and Saturday night for several years. He has been trained by iO out of Chicago and Upright Citizens Brigade out of Los Angeles. He has performed hundreds of shows and often involves other talented improvisers picked for your event. A veteran of hundreds of improv shows across the country, Jeff is used to thinking on his feet and working with the changing needs of any event. He can work in any situation and make it shine.

TV/Videos/Social Media
Jeff created and starred in the viral hit, Instagram Husband, which has 60 million views and has been featured in media around the world from TIME, CNN, BBC, Refinery 29, AdWeek, Vanity Fair, NPR, Chicago Tribune, as well as outlets in China, Australia, Italy, Germany, South Korea among many others.

Jeff has created videos with 7 Eleven, Fossil, Hellman's Mayonnaise, Enactus, American National, Brawl Soap, among many more. If you want a video to accompany your event, Jeff would be a perfect choice for it.

Additionally
Jeff was named 417 Magazine's entertainer of the year, has performed stand up at the legendary Comedy Store, and worked closely with actors from Westworld, Parks n Rec, Mad Men, Sportscenter, Modern Family, 30 Rock, Seinfeld, Workaholics, among others. Jeff has also been hired as a keynote speaker for a number of events from packed arenas as a commencement speaker, to convocation speaking, to conferences. Jeff is happy to travel wherever needed for your event.

This can be worked on an event by event basis, ask away!

To be determined by the event...