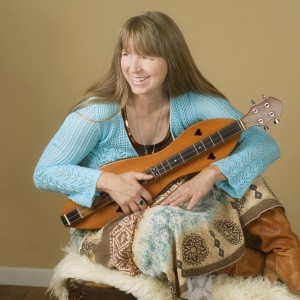 Jan is an expressive performer and creative arranger of dulcimer music. She is also a talented songwriter and visual artist. Her thoughtfulness and gentle playfulness reveals a joy that is infectious and her music is like the breeze that lifts the little birds out of the nest to launch them on their maiden voyage.

Jan is a warm and engaging performer, instructor, instrumentalist and vocalist. She is an accomplished mountain dulcimer player and also plays a variety of other stringed instruments.

Jan Hammond is a Northern Alabama-based mountain dulcimer player, performer, instructor and songwriter, originally from Ohio. Her initial introduction to the dulcimer was from attending a workshop by the legendary Jean Ritchie at the Appalachian Folk Festival in Cincinnati in the early ‘80s. Over twenty years later, Jan was honored to play on stage with Jean during a workshop in 2006 at the Kentucky Music Weekend Festival held each year in Louisville, KY. Jan has a distinctive style of contemporary folk that focuses on simple melodies and thoughtful lyrics. Just Me & My Dulcimer was her debut CD. The seventeen tracks are a mix of instrumental compositions and original songs that pull from observations, memories of loved ones and a charming sense of humor. Within several songs, you will see her love of nature and birds, in particular.

In addition to doing solo gigs, Jan performs with the phenomenal fingerstyle guitar player, Tom Conner. The two met at a coffeehouse open mic and have created a unique blend of acoustic music that continues to entertain audiences throughout NE Ohio. They are very proud of Deep Sky, their duet CD project that was released in August, 2006. Jan released a second solo CD called Man in the Moon. This project was produced, recorded, mixed and mastered by Tom Conner. He added some amazing guitar work to some of the tracks to make this eclectic mix of tunes even more enjoyable.

In January of 2009, Jan recorded In My Next Life, an all instrumental - all dulcimer CD project. It contains original, traditional and classical tunes. This recording happened in conjunction with Jan’s graduation as a Certified Music Practitioner from the Music for Healing & Transition Program, (link hidden). Her focus with this therapeutic music has been at hospice, but she has also played in hospitals, nursing homes and for private individuals.

In March of 2010 Jan released Connected, a lyrical collection of 15 original songs. Jan has numerous awards from dulcimer competitions, at the local, state, regional and national level of the United States. In 2005, she was a top five finalist at the national competition in Winfield, KS. She also placed 1st at the Kentucky State Mountain Dulcimer Championship in 2005 and 2006. She has been awarded 1st place at the Mid-Eastern Regional Competition an unprecedented four times. In 2008, Jan placed third at the National Mountain Dulcimer Championship in Winfield, KS.

Jan teaches at festivals, workshops and events across the country as well as giving private lessons locally. She has presented at the Buckeye Dulcimer Festival, Dulcimore, Southeast Ohio Dulcimer Festival, Kent State Folk Festival, Phoenix (AZ) Folk Festival, Ohio Valley Gathering, Kentucky Winter Dulcimer Weekend, The Swannanoa Gathering, Interlochen Center for the Arts and Coshocton Dulcimer Days Festival. She has also produced three books of tablature for the mountain dulcimer which include everything from originals songs to familiar
hymns and waltzes.

Jan can play completely acoustically or with a sound system, suitable for a small venue. In order to perform with a venue provided sound system, Jan would require a vocal mic, and either an instrument mic or a cable directly to the soundboard or box,

Jan's music has been influenced by everyone from John Denver, Carole King and Joni Mitchell to Aaron Copland. Some of her earliest dulcimer heros include the legendary Jean Ritchie, Jerry Rockwell and LInda Brockinton.

Electrical outlet, if using my sound system for amplification.