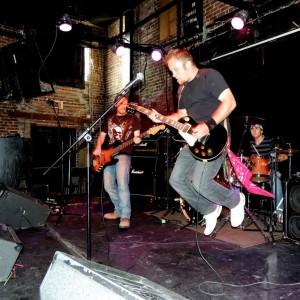 Highway Overdrive is a all original rock band, that has played many venues throughout Canada and the United States in the past few years. In hope's to keep the touring going, Highway continues to write solid and very creative music that will keep you dancing and tapping your feet. With a very unique style, and immense stage presence, the band will keep rocking songs that have a touch of the 60's till today!!

Be the first to review Highway Overdrive

Highway Overdrive is a diverse rock group from Sherbrooke, Quebec, Canada.
Josh Sheldon the lead vocal/rhythm guitarist formed the group in September of 2010. Josh through many trials and tribulations, reaping through several auditions, was able to separate the good from the bad by the use of his extensive fillet of music knowledge. Josh’s final decision would form a power-house trio. These musicians names would be set in stone, forming the group as we know it today!
Chris Floyd, bass man extraordinaire, has 20 years of playing under his belt. His playing is clear, concise, and straight to the point; every note he hits is coherent. Jimmy Daze, drummer, has many years of experience playing the drums and provides the band with great solid rock beats. He also offers an extraordinary visual show!
Highway Overdrive, over the past few years, has done gigs with a lot of known musicians all around Canada and over the United States.
Some of these bands include:
Courage my love (ON, Canada)
Die Mannequin (ON, Canada)
The Respectables (QC, Canada)
Bleeker Ridge (ON, Canada)
London’s Dungeon (TX, United States)
And more…!