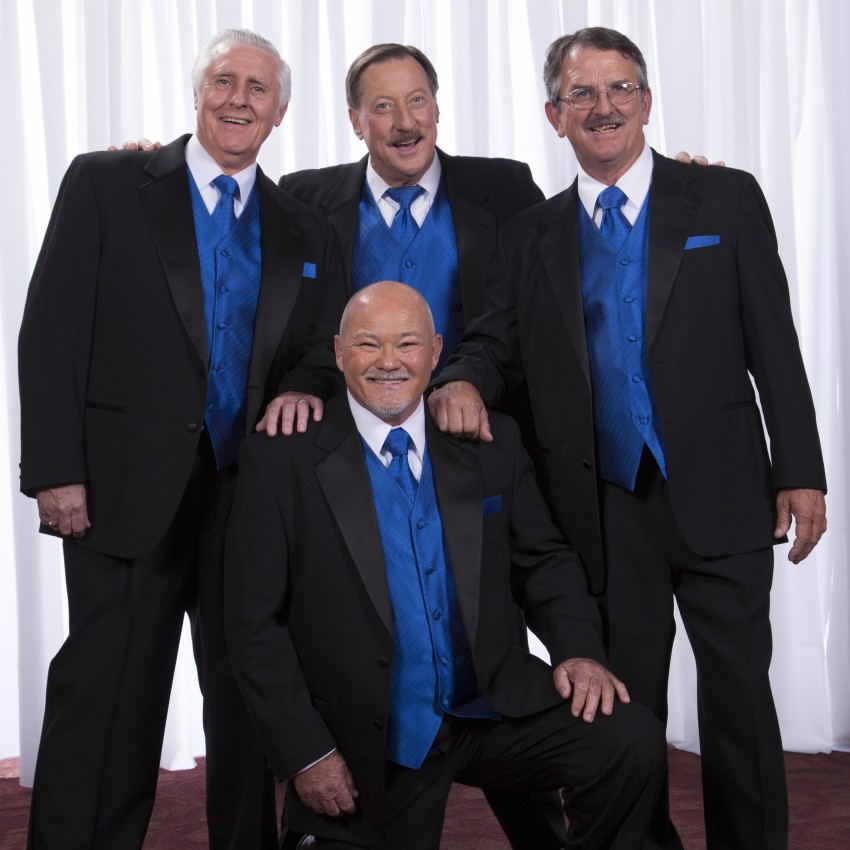 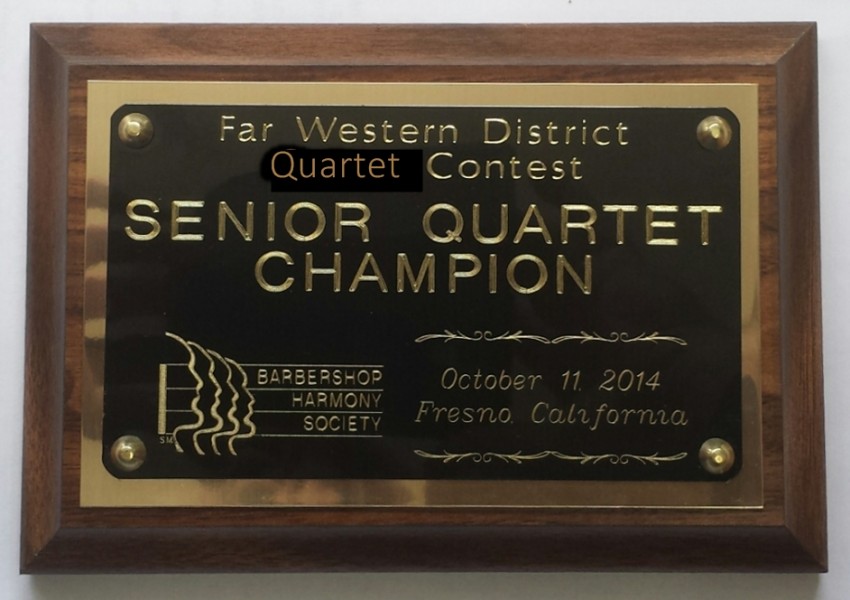 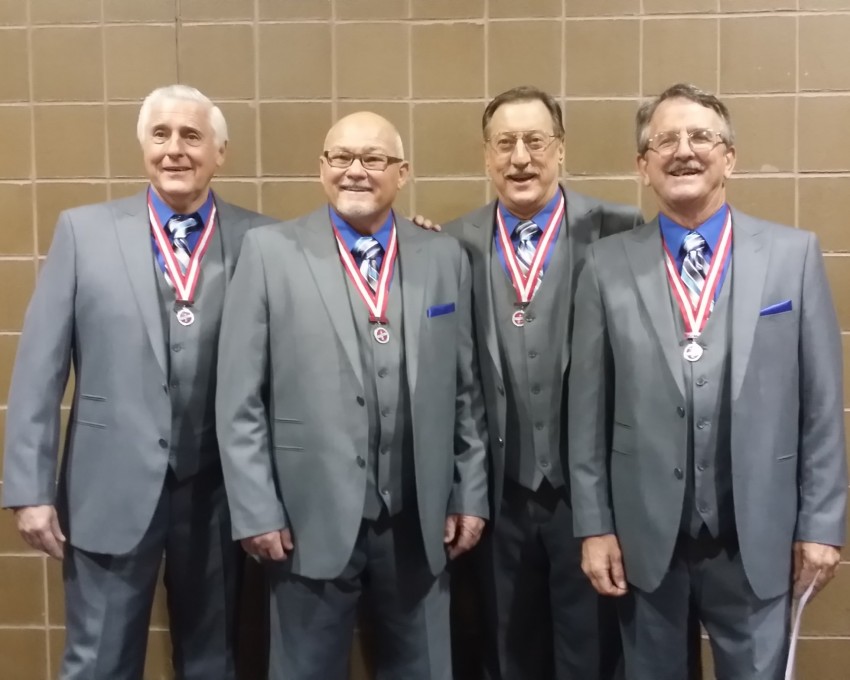 HIGH PRIORITY, Barbershop Harmony Society's 2016 International Senior Quartet Gold Medalists would be delighted to entertain at your private party, corporate function, professional event, or gathering hosted by your social organization or club. A typical show lasts 30 to 45 minutes, and includes a variety of songs arranged and performed in the uniquely American Barbershop style. We're available do your show in the Phoenix metropolitan area or elsewhere as your event requires.

Be the first to review High Priority (barbershop) Quartet

Affable, polished, clean-cut performers, who truly ARE able to sing and ring chords. A few jokes to keep things light, perhaps a demonstration of how our craft works. This is NOT your grandfathers' Barbershop. We won't arrive in striped jackets and straw hats and sing Down By the Old Mill Stream. Our choice of music is intended to offer both high-energy and beautiful harmony captured in recognizable songs.

Formed in April of 2014, and with only four rehearsals under their belts, High Priority won the AZ SENIORS QUARTET CHAMPIONSHIP of the BARBERSHOP HARMONY SOCIETY on May 3rd, 2014, then in the October FAR WESTERN DISTRICT contest won FWD SENIORS QUARTET honors. In January 2015 HP traveled to New Orleans to compete at the BHS INTERNATIONAL SENIORS QUARTET contest. To our elation we came in at 2nd place; and received our SILVER MEDALS. Although a new foursome, we have decades of combined Barbershop singing experience. We're excited and enthusiastic about our new quartet, and look forward to future competitions and entertaining audiences at shows!
Ray Estes – Tenor
Ray hails originally from California and has been singing Barbershop harmony for over 35 years. With a Bachelor of Music Education degree from Northern Arizona University, he's extremely knowledgeable regarding the musical arts (just ask him). Ray directed a Tucson Barbershop chorus for several years, and, singing Tenor or Baritone he's been a key element of many excellent quartets in the Phoenix and Tucson areas. The long list of quartets he's been a part of is too numerous to name here, including ones that competed on the International Stage. Suffice to say he’s a popular guy in the quartet world (or locally, anyway).

Byron Bennett – Lead
Byron sang his first solo at a Hinton, IA school auditorium at the impressionable age of five, followed by a standing ovation and encore. He was hooked. Byron received vocal training at Morningside College and sang with numerous ensembles and theater groups. Byron has sung in fine Far West District quartets (some with HP's Ray Estes) including Saguaro Sound, Vocal Command, and Legacy. He is best known as Lead of Audacity Quartet, Barbershop Harmony Society's 2009 International Senior Quartet Champions. With Audacity Byron also competed in the regular International competition in 2009 and 2010. His passion for musical artistry and vocal excellence shine through in every performance.

Mark House – Baritone
Mark discovered barbershop harmony through his wife Joann, a member of Sweet Adelines International. In 2001 he joined the Phoenix chapter of SPEBSQSA (now BHS), the Phoenicians chorus, and has served in multiple capacities there, including time as a Baritone section leader. Mark quickly developed a love for quarteting, and in his first year was singing in a mixed quartet with his wife, a "performance quartet", and with Rhythm & Rhapsody Quartet, which won both AZ/SoNV/Utah Division and Far Western District Novice honors in 2002. Since then he’s sung in several quartets, including the popular PHX! Quartet. High Priority is Mark’s first venture into the Seniors category of quarteting, and some say his dashing silver hair adds an air of distinction to the quartet's appearance!

Dan Davenport – Bass
Unlike Byron, Dan started singing later in life (2nd grade), and was always in school choirs. Dan’s dad Lew joined the Phoenicians Barbershop Chorus during Dan’s high school years, and Dan attended a Phoenix show in 1973, “just to see Pop and his hokey chorus.” He was surprised and thrilled at what he saw and heard, and was immediately “hooked”, joining the Barbershop Society soon after. Dan spent many years singing Baritone in the chorus, and with quartets Positive Reaction, Gentlemen’s Quarterly, The Promissory Notes (a Gospel group), and an earlier version of the Vocal Edition. He moved to the Bass part with the OK Chorale, Sharpshooters, Oasis, and Vocal Edition quartets. Dan's quartets have finished in the Far Western District top 10 several times, and his deep Bass voice is well known in barbershop circles.

A cappella performance allows us to entertain on-stage before a microphone, or close-up and personal to our audience on the floor where they're sitting. We can stroll thru a venue and sing to tables of guests.