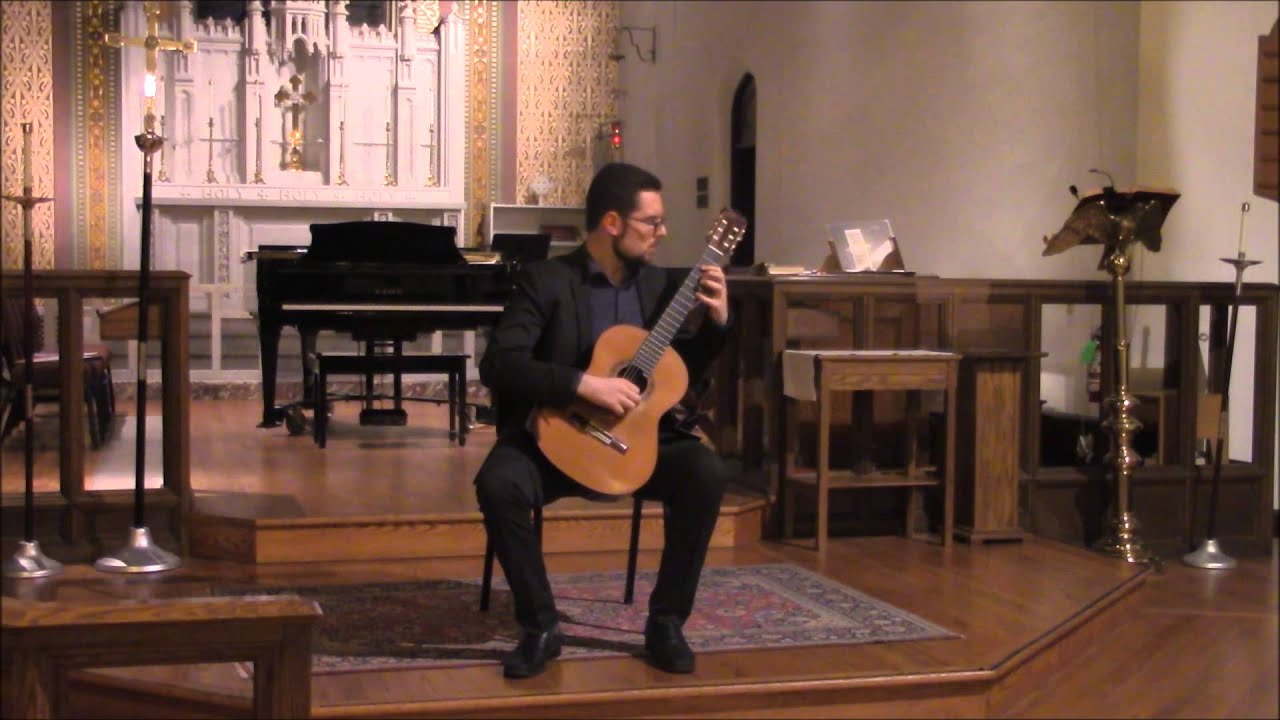 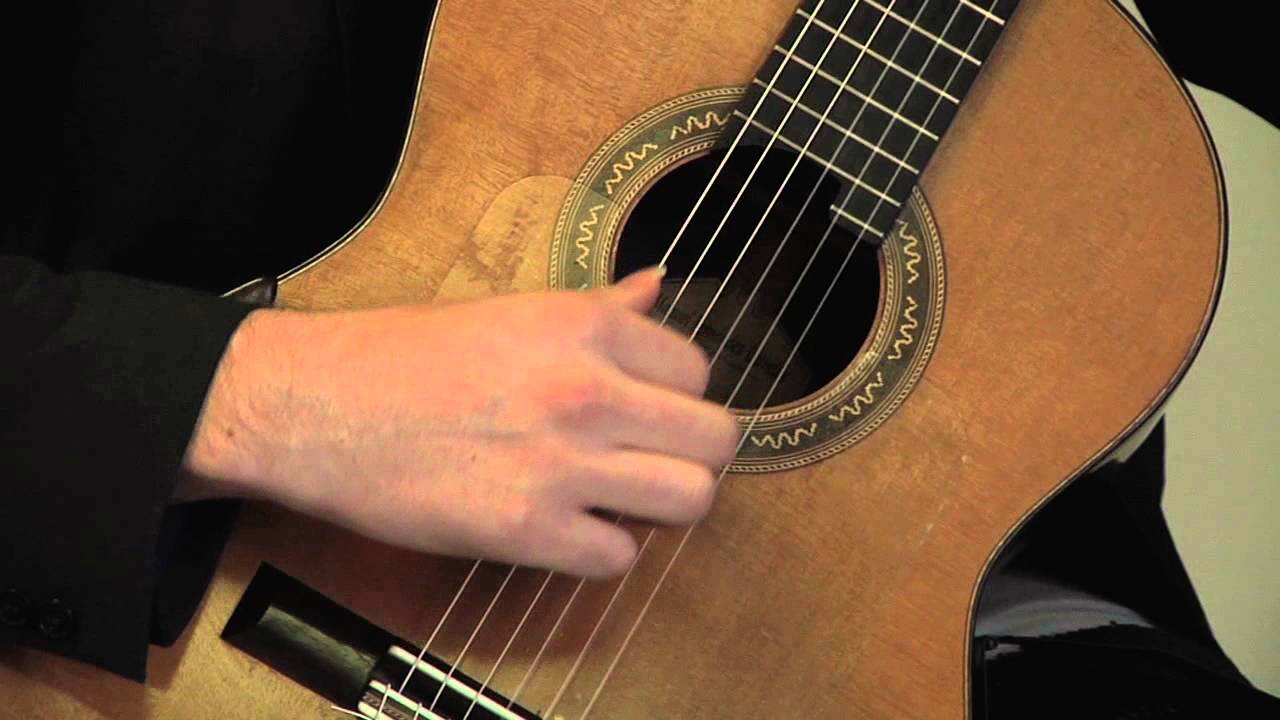 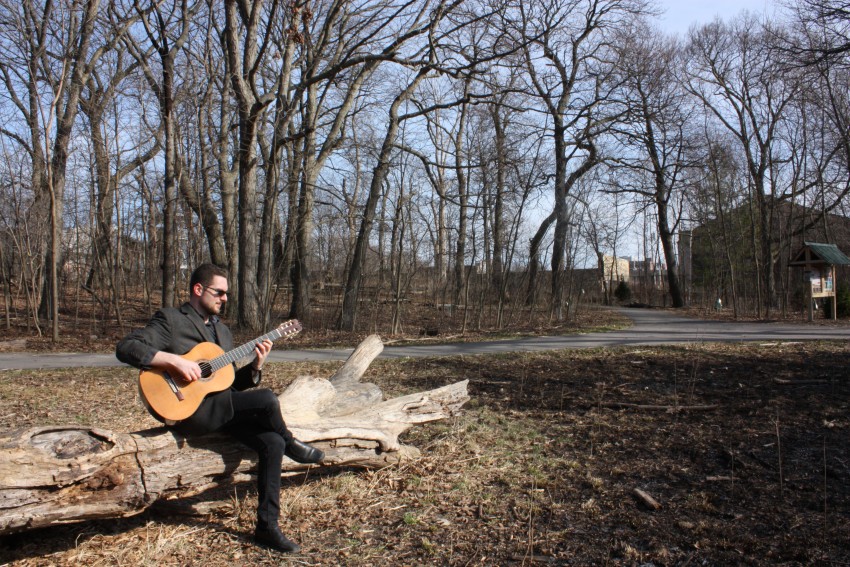 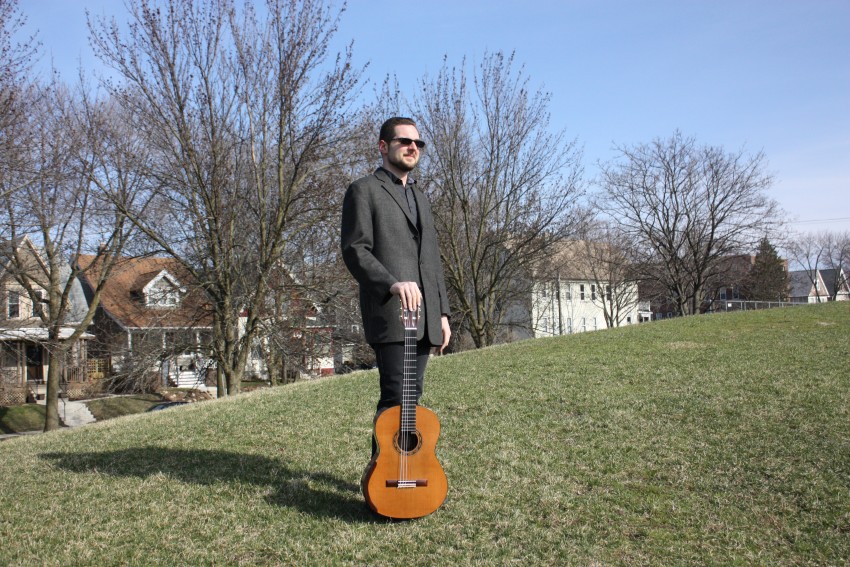 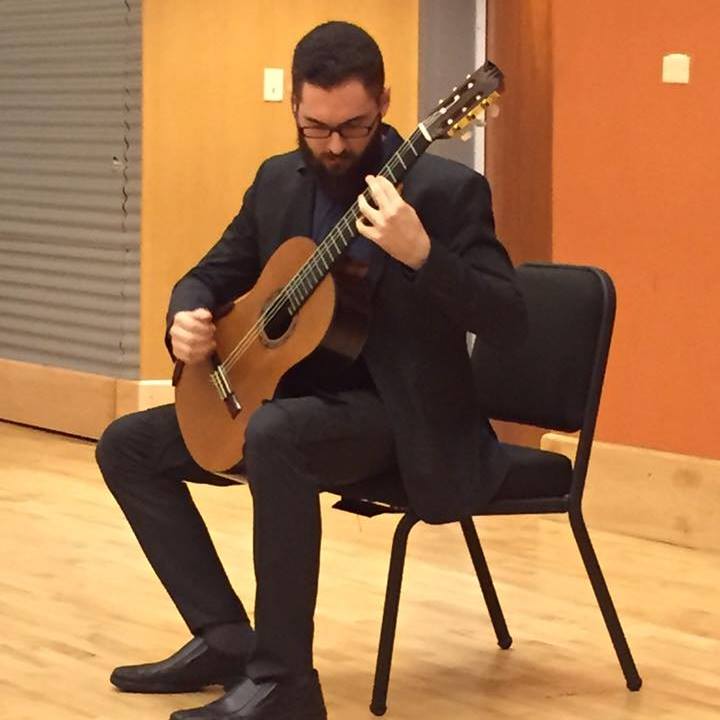 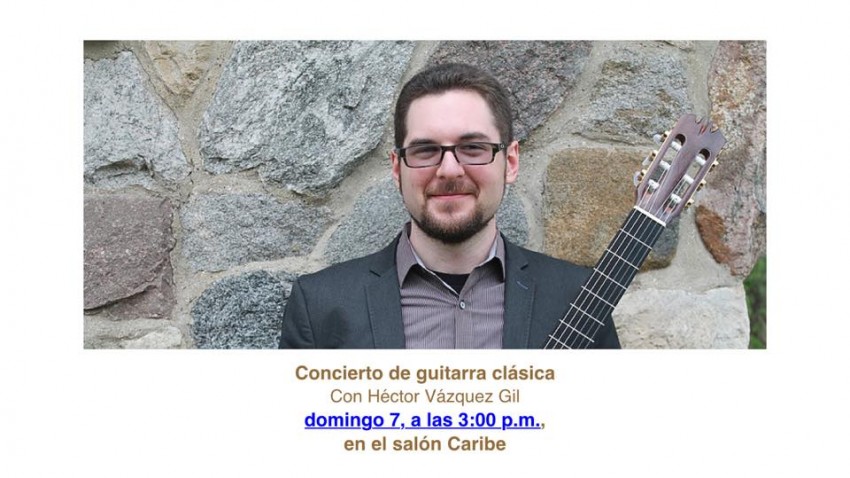 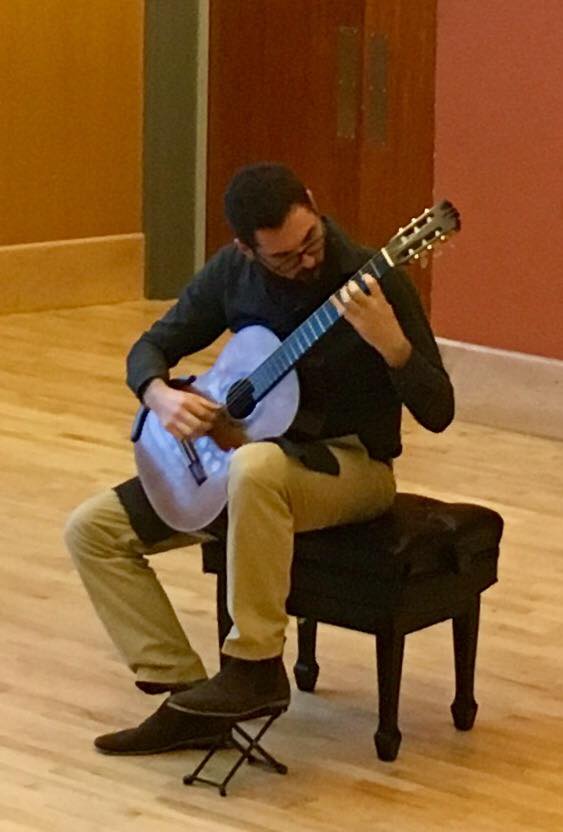 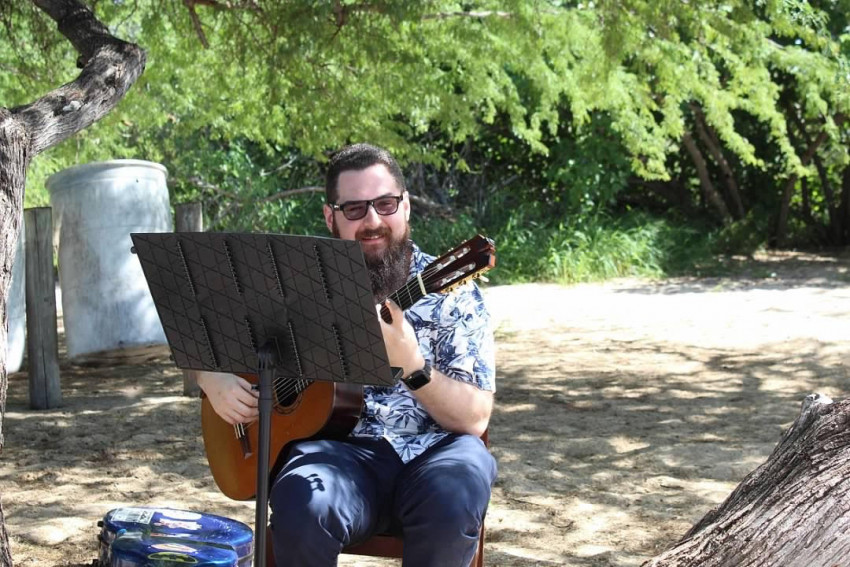 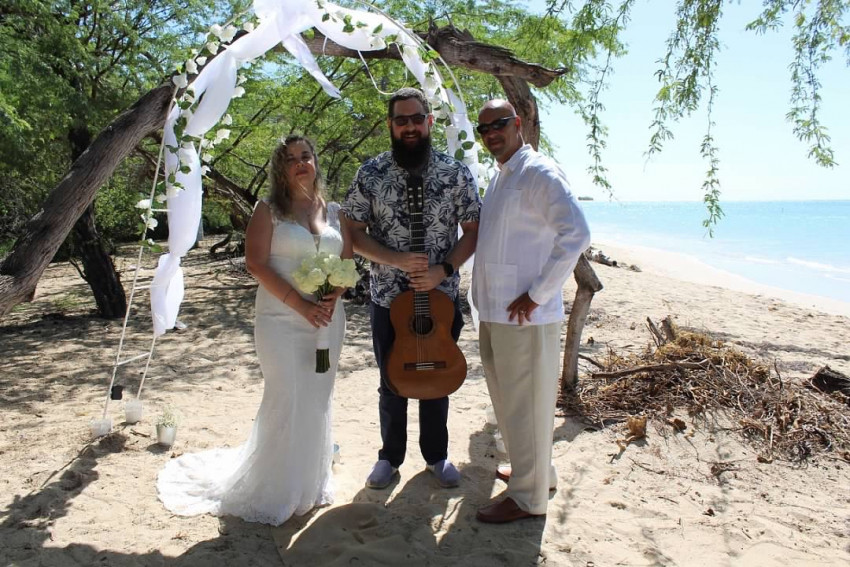 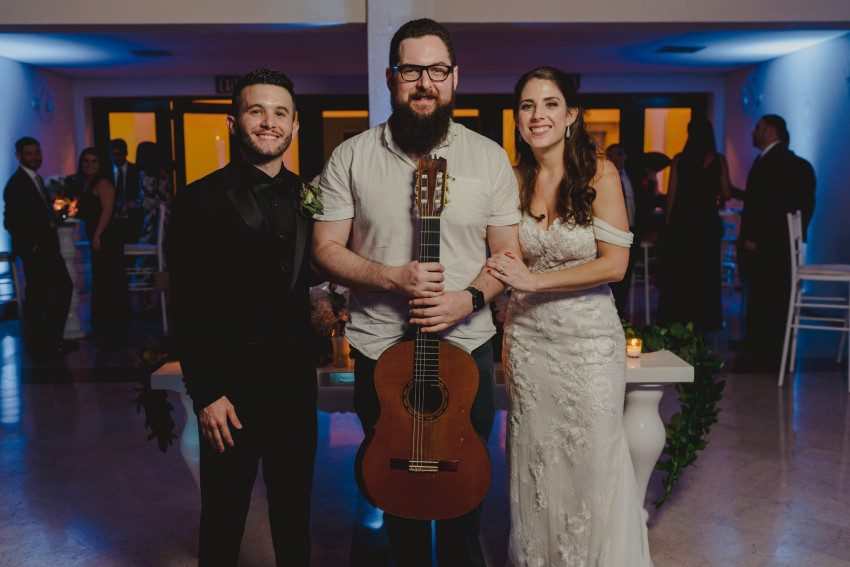 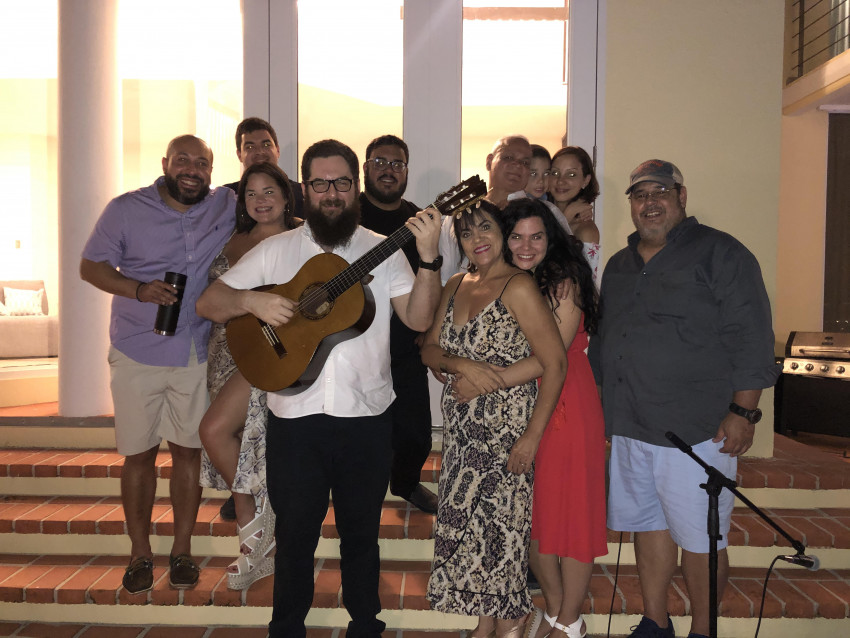 Hector Vazquez Gil is a native of the beautiful Caribbean island of Puerto Rico. He has a Master's Degree in Classical Guitar Performance and has has concertized and played in various venues throughout the island of Puerto Rico, Spain and various states in the US like: Wisconsin, North Carolina, Florida, New York and Tennesee and a few others.

While his career is focused on performing in high pressure classical concerts, he is also experienced in performing in events such as weddings,cocktails,funerals,restaurants,electric guitar, background music and many others. He can perform a wide variety of musical styles, from classical music to rock, blues,flamenco and popular music.

He seemed nice and accommodating to the time change. I wish he wouldn't have come dressed so casual considering it was a wedding, however.

Perfect For the Occasion

From the moment we secured Gil to play at our wedding his communication and desire to provide exactly what we were looking for was top notch. I would highly recommend anyone looking for a beautiful touch on their event to book him ASAP!

Thank you so much Irving, this was such a wonderful wedding and you were a class act to me from start to finish!

Hector was an awesome part of our wedding. Very easy to communicate with and really is an extremely talented musician. He played beautiful songs for our wedding and even learned a requested one in order to play it at the ceremony. My only regret is that there weren’t more people there to get to hear his talent (It was just the two of us). You should absolutely hire him for your event. You won’t be disappointed!

Mr. Hector Vázquez did an extraordinary performance for my Fathers’ surprise 60th birthday party. We were transported through Europe and Latin America during his wide range of classical guitar performances. He introduced each performance piece with background information and details about each song. We truly felt as if we were experiencing our very own private concert at home. Hector was extremely professional and kind. He is beyond talented and we look forward to hearing him play classical guitar in the future.

Thank you once again for letting me share my music with you on your special ocassion. I thoroughly enjoyed the evening.

There was a protest in Old San Juan the evening of our wedding ceremony, which caused a major traffic delay. It started raining and we had to move everything indoors. Hector was very flexible with these complications, and tried his best to keep up with the volume of the protestors.

Thank you so much Linda, I am sad things did not go as we planned but we made the best out of the situation we had! Congratulations and I hope you are enjoying your married life.

Hector is a master at his craft. First time we saw him was at El Consevatorio de Musica in San Juan, back in 2016 and we were blown away. When we decided to get married, we both agreed we wanted to have him play at our ceremony and at our reception. Hector is a professional musician who caters to different types of music, he is easy going and very passionate about his work. Would highly reccomend him for any type of event.

Thank you so much Julio, I enjoyed your family a lot!

Hector played at my beach wedding held at Combate Beach, Cabo Rojo, PR this past weekend. I was supposed to have the wedding at El Faro in Cabo Rojo, however, my in-laws had trouble walking so I changed the venue to the beach and he was so accommodating. It was also held at 12 noon which is the hottest hour and he was ok with that too. Hector even played a request I sent him the night before!Hector is a sweet, genuine person who has a true gift with his guitar. Everything was going on so fast and I was nervous, however, hearing his music in the background made me stop so I can capture every moment. Thank you so much Hector!!! You were simply awesome!!!

I highly recommend him to everyone!!

So kind of you Carmen, I enjoyed your wedding, your family and everyone involved so much.

Hector was a pleasure to partner with. He was communicative, responsive, on-time, and very friendly! He is exactly what we were looking for for our small, intimate wedding ceremony. We would definitely recommend Hector, as well as book him in the future!

Héctor was great at our wedding. He played the music we requested of him beautifully along with his other tunes. Great job, would hire again!

Thank you Ana, I wish you and Fernando the best.

Hector was fantastic. Very accommodating and ended up playing 2 events for us. Very understanding for our specific list of music we wanted played while mixing in songs from his library.

Would recommend him and would use again.

Hector is a great communicator, ensuring all bases are covered. He thought of things I didn't think of like electricity and such. (Don't judge, I had a lot on my plate! :)) His talent is the real deal and he provided great background music for our wedding dinner. The songs were intricate enough to demand some attention, yet light and not overdone. Many covers that were familiar with a unique twist. He was able to bring songs at short notice. The only down side would be that the music was a bit hard to hear outdoors during the wedding ceremony. I would definitely work with Hector again, he is very pleasant and happy for such a wonderful musician!

Thank you so much Marilyn! Enjoy your honeymoon.

Héctor was amazing and easy to work with. I planned our entire wedding site unseen, without the opportunity to meet most of my vendors, including Héctor. We communicated through email and text. I let him know what I wanted for our ceremony and reception, and he was quick to respond and clarify my expectations. Héctor came dress professionally, I had asked him to wear a guayabera and he obliged. He came prepared with his own amp and equipment. I would, without hesitation, hire him again if needed.

Thank you so much Noemi! I'm very glad you are happy. It was my pleasure to work with you. You were very kind and responsive. Congratulations! Enjoy your honeymoon.

We booked Hector to play classical guitar music for our Spring Party. He arrived on time, professionally dressed, and played beautifully. We would highly recommend him for event planners who would like to add lovely guitar music to the ambiance of their event.

Hector Vazquez Gil is a native of the beautiful Caribbean island of Puerto Rico. He began guitar studies at the Preparatory School of the Conservatory of Music of Puerto Rico, where he studied with Renaldo Guadalupe, Ángel del Rio and Julio Reyes. He was later admitted to the Bachelor Music in Guitar Performance at the Conservatory where he studied for three years with Ivan Rijos. Later, he transferred to the University of Wisconsin Milwaukee where he completed his undergraduate degree in Classical Guitar Performance under the tutelage of Rene Izquierdo as well as Flamenco with Peter Baime. He later studied for a year with reknowed professor Bruce Holzman at Florida State University, where he was a Teaching Assistant. He finished his master's degree with Ivan Rijos at the Conservatory of Music in Puerto Rico in May 2017.

Hector has concertized and played in various venues throughout the island of Puerto Rico, Spain and various states in the US like: Wisconsin, North Carolina, Florida, New York and Tennesee and a few others. He has studied and played master classes for reknowned guitarists such as: Manuel Barrueco, Alvaro Pierri, Scott Tennant, Judicael Perroy, Pablo Garibay, Jorge Caballero, Xu-Fei Yang, Rovshan Mamedkuliev, Jeffrey McFadden, Dale Kavanagh among many others. He is also an experienced teacher, having taught students of different ages and levels in Puerto Rico, Florida and Milwaukee.

One armless chair and electricity outlets for amplification.